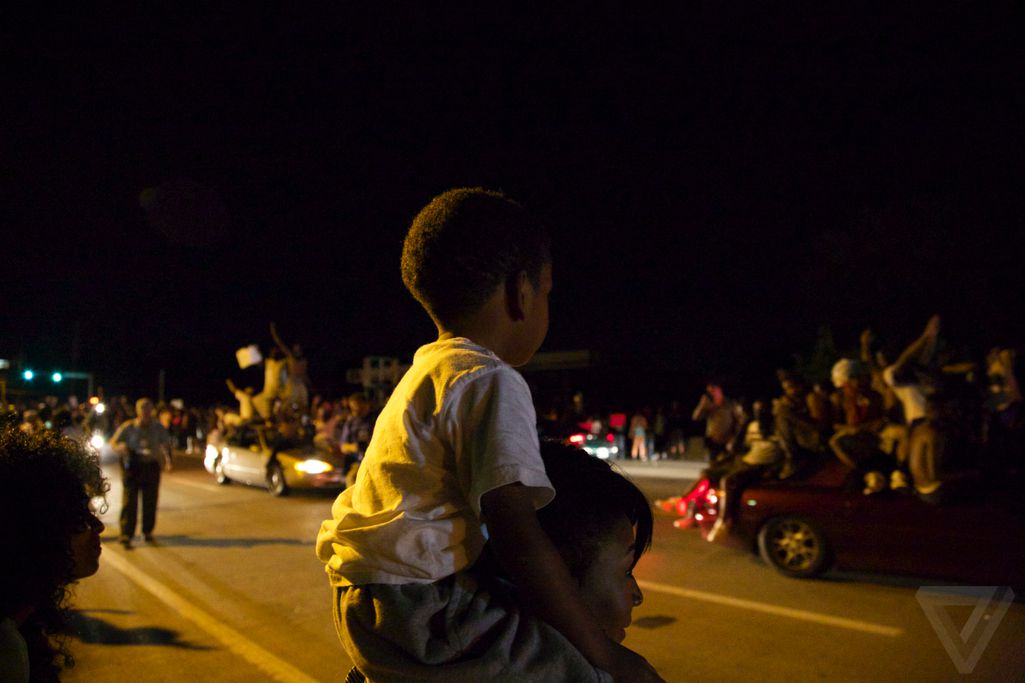 Around 1:30 in the morning last night, in front of the shuttered Celebrity Restaurant and a quarter mile from where Michael Brown was killed by a Ferguson police officer on Saturday, shots rang out. It was dark — a three-quarter moon above, scant street light — and people began to disperse. They walked toward the main drag, West Florissant Ave. Surprisingly calm, some walked right, some walked left. Some ran into the street. A man wearing all black yelled, "Someone got shot, time to go home!" at least twice. And it seemed like they were going to.

This was one night, however, when such a thing seemed like it wouldn’t happen so quickly. This was one night after two reporters made national headlines when police arrested them in a nearby McDonald’s for unstated reasons. This was one night after Al Jazeera was publicly gassed and had their cameras disassembled by police. And this was just five days after a 18-year-old Michael Brown had been shot by police, sparking a wave of ongoing protests. Tonight, hundreds of people — the numbers were unclear — had been out on the streets of Ferguson, Missouri since at least 4PM, protesting Brown’s death. But when someone was allegedly shot outside the Celebrity, there was a change in mood. A car sped off (witnesses said it was headed to the hospital; St. Louis County Police public information officer Brian Schellman was not available to confirm or deny the witness reports). And people did start to go home. An hour later, the streets were all but clear. Road barriers had been set up. The honking cars and chanting protesters of hours ago were all but gone.

"This was our success," said Malik Z. Shabazz, an organizer for the protests this week as well as a lawyer and leader of the Black Lawyers For Justice. "We have to police ourselves. We have to discipline ourselves."

And last night, that’s exactly what they did. 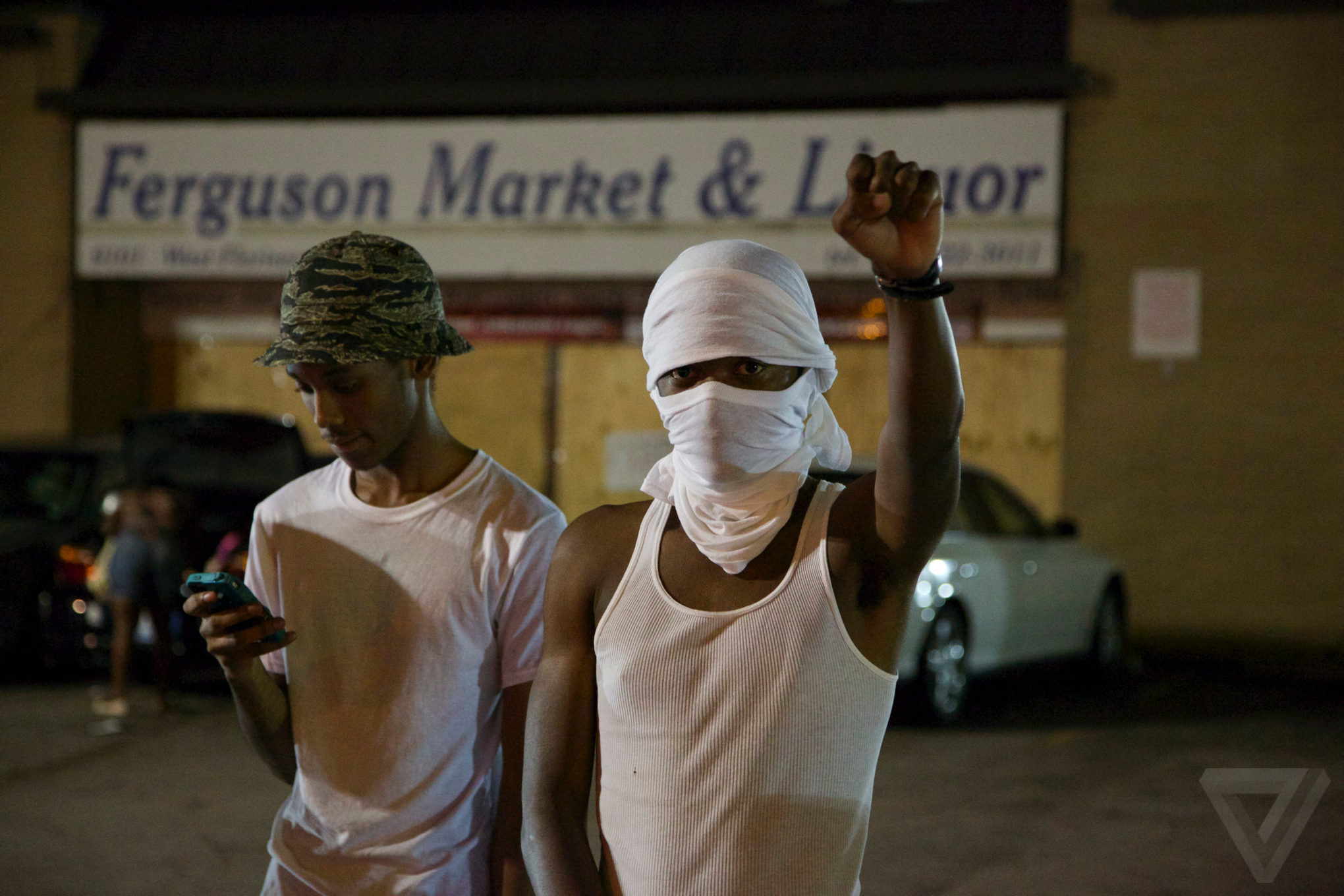 No justice, no peace

Though protesters had begun staging — preparing signs, gathering groups of clergy and friends and other interested parties — in various locations in the Ferguson area earlier in the afternoon, they met at 5PM in front of the burned out and abandoned QuikTrip convenience store, where rioters had looted on Sunday night and set fires that turned the place into a charred shell. From there, protestors walked from the Celebrity Restaurant to Greater St. Mark Family Church — a mile-and-a-half long trip. No one was angry. There was no shouting beyond the chants of "No justice! No peace!" and the rallying cry that’s become synonymous with Michael Brown’s killing: "Hands up! Don’t shoot!" (Witnesses say Brown was unarmed and holding his hands above his head when a police officer shot him in the back on Sunday.) Cars honked at the line of protestors on the sidewalk in short chirps.

When the protesters arrived at St. Mark’s, Everett Hatfield was with them. A 63-year-old longtime St. Louis resident with graying hair, he camped out in front of the church with his daughter and granddaughter. He explained why he’d decided to protest tonight.

"I think its time that the police and the jurisdictions that support the police embrace the community," he said. "That means all of us."

"The police have carte blanche when it comes to killing black people."

The problem, he continued — and the reason why he and so many people had decided to protest here in Ferguson and elsewhere — "is that the police have carte blanche when it comes to killing black people. They know that they can get away with it." And what’s more, he said, "They have a fear of the community they’re policing. They are much more willing to respond in a violent manner than they would if they were policing their own communities."


That was a recurring theme over much of the evening. After an hour or at the Greater St. Mark Family Church, protestors walked back to the QuikTrip. Some migrated south to the Celebrity Restaurant a block away. There, Gerard Marshall, a 54-year-old St. Louis city resident picked up on Hatfield’s comments without being prompted to do so.

"What has to happen is transparency," he said. "We need the officer’s name" — the man who shot Michael Brown. "And we need the autopsy report. And we need to know what kind of record the officer had on the police force. Did he come from another force with disciplinary actions? We need to know. If people knew those three things, these people would not be out here today. Release the report, that’s it."

"Why the secrecy?" Marshal said. "They say the officer’s life is in jeopardy? Bullshit. They can protect him"

A change in tone

Around 9PM, protestors had been standing near the QuickTrip for hours. The protests began to morph. As pastors and friendly police filtered out of the crowd and left for home, the gathering began to resemble a rowdy campus party, not a solemn gathering. Police were almost completely absent during this time.

An endless procession of cars, honking incessantly, drove back and forth down W. Florissant Ave. There was no way of seeing from the street where the line ended or began. It felt like the entire country had lined up to pass through this half-mile stretch of pavement and suburban sprawl. They shouted defiantly against a shattered peace as they drove by, louder and louder as the night went on, just to hear an echo from their neighbors.

The scene was pure spectacle, but layered deep with catharsis. Sosa, a young man who’d been around for the week’s heated standoffs with police, said he and his neighbors had been set free. "They told us to go back to the house," he said of the St. Louis County Police. "We don’t want to be in the house. We want to be on the streets."

The police were almost completely absent during this time. No riot police, no armored trucks. At one point, the sound of what seemed to be like gunfire emerged from a far end of the QuikFill parking lot. As people in the area ducked for cover, Missouri Highway Patrol Captain Ron Johnson and St. Louis Metropolitan Police Major Ronnie Robinson emerged in a hoard carrying photos of Michael Brown and assuring the crowd, "That’s not a gun, that’s fireworks!" Earlier in the night, during a short press conference on scene, Cpt. Johnson had said: "When I see a young lady cry because a fear of this uniform, there’s a problem." He said similar things at this point; he was there to empathize with the crowd. This, too, seemed like spectacle. Both the Captain and the Major are rare black officers in a coalition of St. Louis police departments getting attention for their whiteness; more than one protester commented that top brass had asked some of the only high ranking black members of local police forces to show up on site. They made a brief presence, then vanished.

As the Captain and Major walked through the crowd, the scene raged on. Cars in the procession were often packed full of people. Many sat or stood on the roof or trunk. Drivers and passengers alike joined in chants, recorded the scene on their smartphones, and blasted music. Smoke rose from the street as some drivers spun their rear wheels. Bikers revved their engines. There was even some ghost riding. One man divided his time between the steering wheel and his iPad, which he was using to record the crowd as he stood halfway outside his SUV. But mostly, there was honking — enough to make rush hour in midtown Manhattan seem like a library.

Thursday night had plenty of ingredients for disaster

It’s difficult to quantify the real tension in a scene as an outsider, but the ingredients for disaster were present Thursday night. Many in the crowd were drinking and smoking cannabis openly — some while behind the wheel. As the parade of cars waned and more space opened between them, some drivers sped down the crowded street even with people on top of their vehicles. Several people we spoke to had the sense that things might take a turn for the worse in the early morning when the grown-ups retired and the youngest community members were still out.

An aggressive encounter fueled this premonition. Sometime after midnight police sped into the demonstration area and approached the McDonalds. A crowd formed, upset with the police presence, and marched towards them, forcing them back to their cruisers. At least one member of the crowd launched a glass bottle that shattered on the street. The police quickly retreated back to their staging area — a spot in front of a strip mall with a Target, a Boost Mobile, a Schnukcks pharmacy and other stores — less than a mile in the opposite direction of St. Mark’s church.

We expected the police to return in full force at some point in the evening. They didn’t.

Slow the hell down

Charles Brooks was at the protests last night because Michael Brown’s father is from the same neighborhood he’s from. "And at the same time," he said, "I’m tired of being abused by the police. We all are." The clashes with militarized cops — who shot tear gas and set up huge barricades of police in riot gear wielding automatic weapons and driving armored trucks — had been a representation of a long deescalating relationship between the black community and police in St Louis. "It’s created a separation and a distrust between the neighborhoods and the police," he told us. He described being thrown up against a fence by police, being detained for no reason, police showing up at a funeral in a friend’s back yard for no reason. "It’s harassment plain and simple."

The protests, he said, "are about Mike Brown, but a lot of this stems from a lot of nasty history here."

"I’m tired of being abused by the police. We all are."

With many clergy members and more peaceful protesters (many were at the protests with young children) gone, many of the leftovers were either there to shout angry phrases — "Fuck the police" at the most tame — or worse. So it wasn’t surprising when shots rang out in front of the Celebrity Restaurant. The crowd had thinned by 1:30AM, but tension had grown.

Malik Z. Shabazz — the organizer and lawyer — had been on scene with a megaphone for most of the evening, but he took a much firmer stance at this point. In some circles, Shabazz’s politics are shouted down; the Southern Poverty Law Center, for one, has taken Shabazz to task for making "violently anti-Semitic remarks" and speaking openly about "the inherent evil of white people." But in this crowd tonight, he was an antidote to violence. 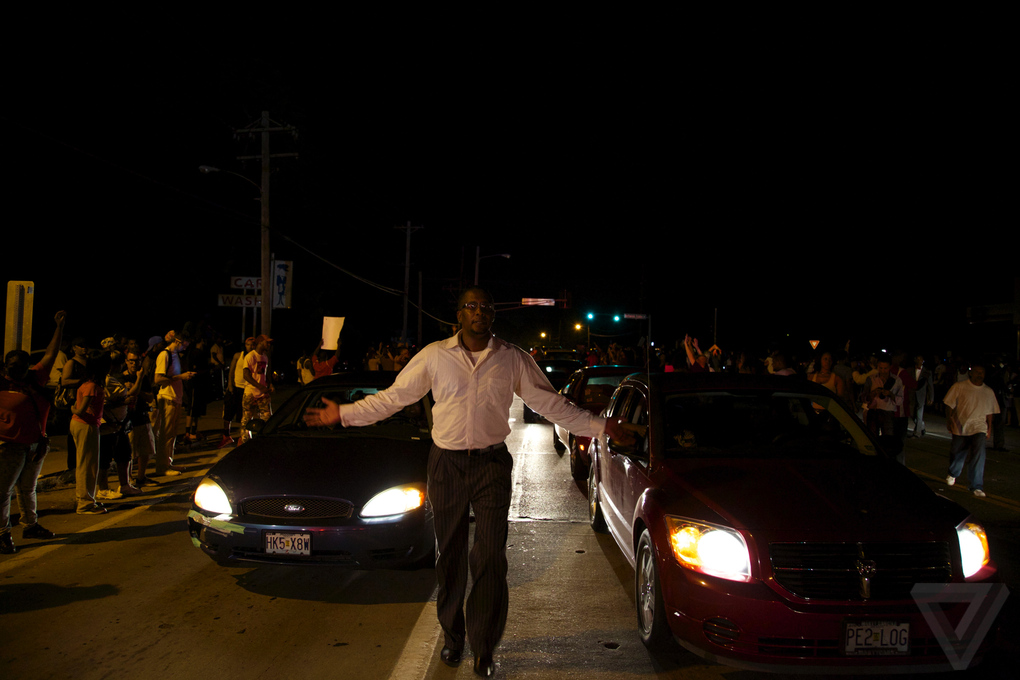 Tall and wearing glasses, dressed like a lawyer in smart gray suit pants and a white button-up shirt, he instructed people to begin making a barrier with orange pylons in the road in front of the Celebrity Restaurant. He walked up and down W. Florissant Ave. yelling "Slow down, goddamnit. Slow yo’ ass down" at people who were spinning tires, racing down the main drag. He told people to go home. Into a megaphone, Shabazz said: "We love y'all. Now go the fuck home." And they did.

We caught up with Shabazz as the last in the crowd began to disperse. What was it about this man and what he said that so calmed a crowd that seemed to be on the verge of chaos?

"You gotta talk to ‘em in a language they can understand, otherwise they gonna bug," he told us. "And tonight we just got to a point where we had to shut it down because if we didn’t, we know it’ll be on the news tomorrow that somethin’ happened and it’ll mess the whole night up."

"We’ll be back tomorrow," he continued. "‘Cause Friday night gonna be more challenging than Thursday."