Moto 360 smartwatch priced at $249.99 according to Best Buy listing

Share All sharing options for: Moto 360 smartwatch priced at $249.99 according to Best Buy listing

Motorola is all set to unveil its Moto 360 watch at a press event in Chicago on September 4th, but it looks like Best Buy has let the cat out of the bag. A product page for the Android Wear smartwatch has mistakenly gone live on Best Buy's mobile site, and it lists the device with a $249.99 price tag.

This is not the first time we've heard that the Moto 360 will cost $249.99. The fine print of the official rules for a Motorola contest this past May placed the smartwatch's approximate retail value at the same price. Droid Life first reported on the leak earlier this afternoon.

Just $20 more than the G Watch

That price puts the Moto 360 at just a bit more than the first two Android Wear smartwatches, the LG G Watch and the Samsung Gear Live, which cost $229 and $199.99, respectively. For the extra cash, the Moto 360 appears to be quite a bit more attractive from a design standpoint — its circular display is certainly well-suited for a watch.

The Best Buy page does list some preliminary specifications: the LCD touchscreen is said to come in at a resolution of 320 x 290, and the display is protected with Gorilla Glass 3. It's also water resistant and it has an optical heart rate monitor built in like the Gear Live. There's a built-in pedometer as well. 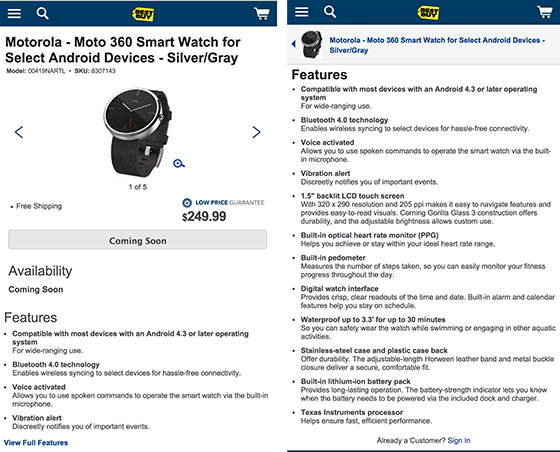 Notably, the product page does not offer a release date other than a vague "coming soon," though Google previously said that it'd be available sometime this summer. Of course, it's worth noting that product pages have been wrong in the past, and it's also possible that Motorola could make a last minute price change. We expect to hear much more about the watch early next month, but for now be sure to check our hands-on preview of the device from this past June.