I burned through my inbox with Mailbox for Mac

The king is dead, long live the king

Share All sharing options for: I burned through my inbox with Mailbox for Mac

Email, right guys? Some love it. Some hate it. Some are trying to replace it. But the fact is, we all use it. And since early 2013, Mailbox has been the fastest way to manage it, but it’s only worked on iPhone and Android. Today, however, Mailbox for Mac is finally available in beta (direct link), and it offers a taste of how email might feel if it weren’t bound by the age-old technologies underpinning it. All current Mailbox users will soon receive an email with a “beta coin” that unlocks the app. (Everybody else will have to sign up for access on MailboxApp.com and wait a few weeks.)

The app still has its fair share of bugs, but since I began testing it a few weeks ago, I’ve only rarely returned to Gmail. In fact, it’s almost as if Gmail doesn’t exist at all.

More importantly, in actual usage the desktop and mobile apps in tandem make email easier to manage. For example, Mailbox for mobile now lets you “snooze” emails back to your desktop. Upon returning to your office, these emails will be waiting right at the top of your inbox. The apps also lets you snooze multiple emails until next week, or until you get back from vacation. My inbox is consistently smaller than it's ever been, even if only because archiving an email takes one swipe instead of two clicks.

But I’ll get to all that in a bit. First, a brief history lesson.

Back in 2011, Sparrow promised a simpler email experience free of buttons, drop-downs, toggles, settings, ribbons, and heavy interfaces that you didn’t actually need. You were left with your email, for better or worse. But when Google acquired Sparrow, the company’s apps fell into disrepair, leaving nothing to fill its shoes. Two years later, a few decent apps like Airmail, MailPilot, and Inky have cropped up, but none of them filled the spiritual void left by Sparrow. No app has as effortlessly balanced features with beautiful simplicity, rock-solid performance with speed — until now.

Mailbox for Mac is almost exactly like its iPhone and Android counterpart — you can swipe to archive emails, snooze messages for later, and even set up an "auto-swipe" rule so all your soccer league emails get pushed to the weekend. It also has the same clean, white color palette. But most importantly, Mailbox for Mac is fast. Like, really fast. When you first sign in to the app, all your email loads in seconds.

This is pretty amazing, because desktop mail apps have traditionally been some of the most cumbersome pieces of consumer productivity software. This is in part because we all have so much email, and the protocol we use to send and receive it is so ancient. Mail for Mac, for example, not only loads messages slowly but also chooses to store gigabyte after gigabyte of cached email. So, Mailbox for Mac, like Mailbox for iPhone and Android, doesn’t actually load your "emails." It loads tiny snippets of text copied from your email messages. This leaves the bulk of email — layer upon layer of indented, embedded replies, a digital onion that will make you cry — on Google’s or Apple’s server (Mailbox still only works with Gmail and iCloud, for now).

By abstracting email into simple "messages," Mailbox can check the unread status of 100 messages using just 200 bytes of data, says engineering lead Sean Beausoleil. Most mail apps, on the other hand, might spend 8K (40 times as much data) on the same request. 8K is a miniscule amount of data, but it adds up, says Beausoleil.

Mailbox’s speed isn’t only related to the size of its messages. The app maintains constant contact with Dropbox servers so new messages can be pushed to your inbox instantly. This also means that when you archive a message on your Mac, it’s pulled from your phone less than a second later. In my tests, receiving new messages and archiving old ones on desktop was reflected on my phone almost instantaneously. The new "snooze to desktop" feature also served up emails within a second. Compared to most mail apps, which require you to click a refresh button or wait a few minutes for the app to poll an email server, Mailbox feels lightning-fast. Even Gmail on the web feels slow by comparison.

What does the inbox of the future look like? 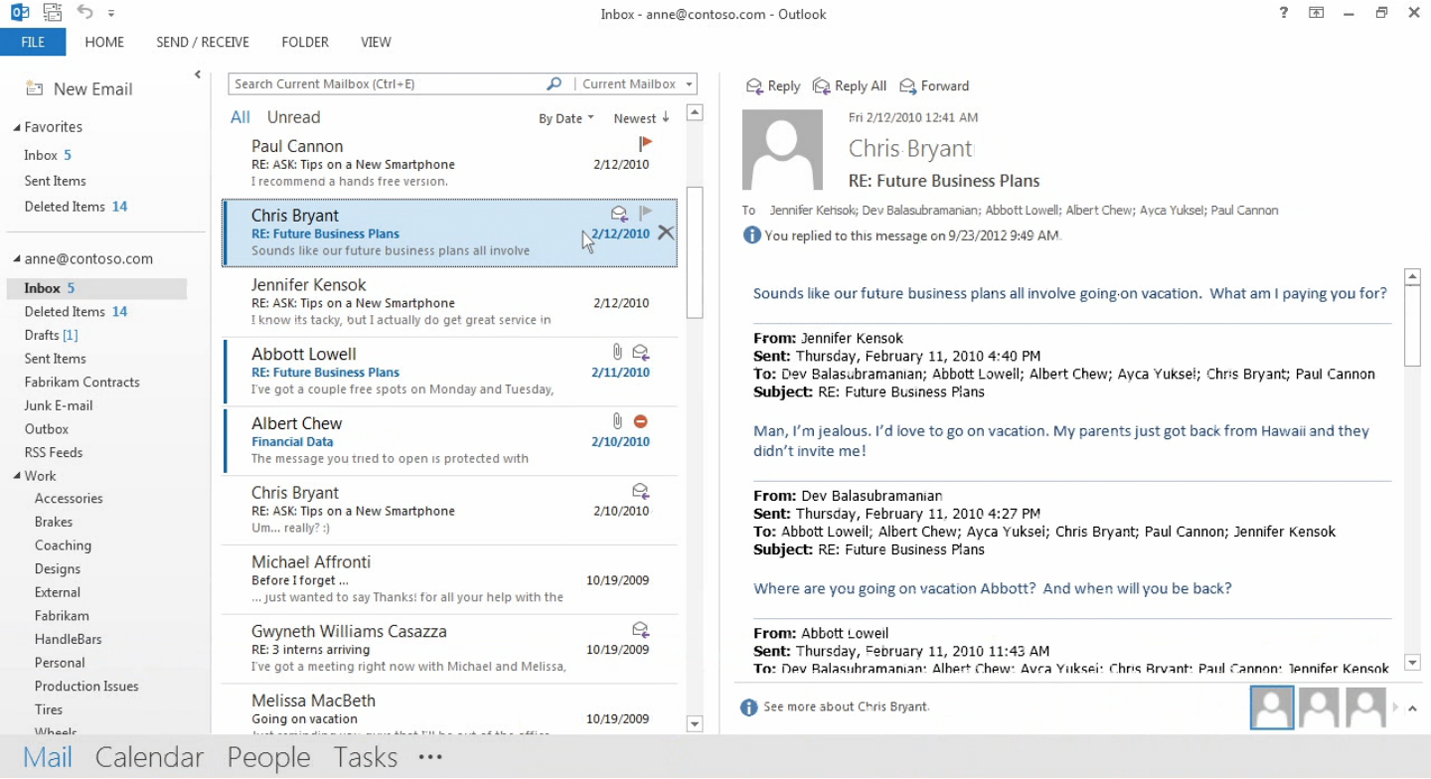 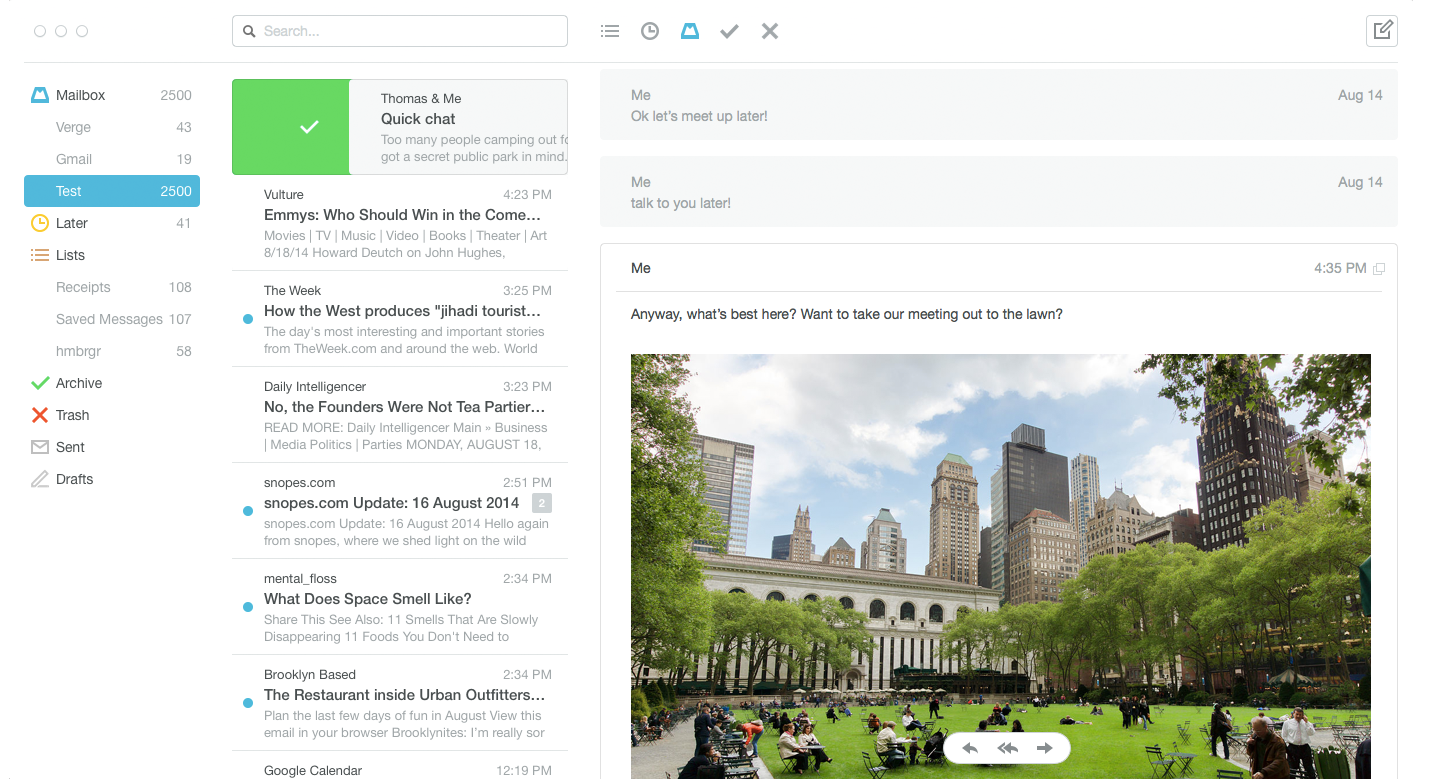 With the release of Mailbox for Mac also comes drafts, which has been sorely missing from Mailbox for iPhone and Android. But unlike most drafts implementations, which are handled by syncing messages to a drafts folder on an email server, Mailbox handles all your drafts on its own and stores them in Dropbox. This means that if you open another email client, your drafts won’t be there, but it also means that Mailbox can sync your drafts between desktop and iPhone as if they were instant messages.

"Drafts in IMAP are a terribly broken paradigm," says Beausoleil. "The Mac Mail app saves a new document in drafts every second, so you get an incredibly high-volume way of saving drafts that takes up space, makes search sluggish, and then every device has to sync all those things. It’s incredibly inefficient." I tested out the feature by typing an email reply into Mailbox for Mac. By the time I glanced over to my phone, the draft had already appeared in my message list.

Drafts is one more way that Mailbox for Mac feels most like a "messaging" client — the lifelong aspiration of Sparrow, with its bite-sized threaded messages and color-coded email recipients. With its swipe gestures for triaging messages, Mailbox sometimes even feels like a to-do app. The engine behind Mailbox, in fact, wasn’t originally even built for emails. Before Gentry Underwood and company built Mailbox they built Orchestra, a to-do app hosted in the cloud. "Mailbox was an iteration on Orchestra," says Beausoleil. "We didn’t know it was going to be email — but when when we did know [our system] became an abstraction of tasks and emails. You have things, and these things have sub-things. In the world of Mailbox it’s a thread that has emails, but it could also be a task that has notes." 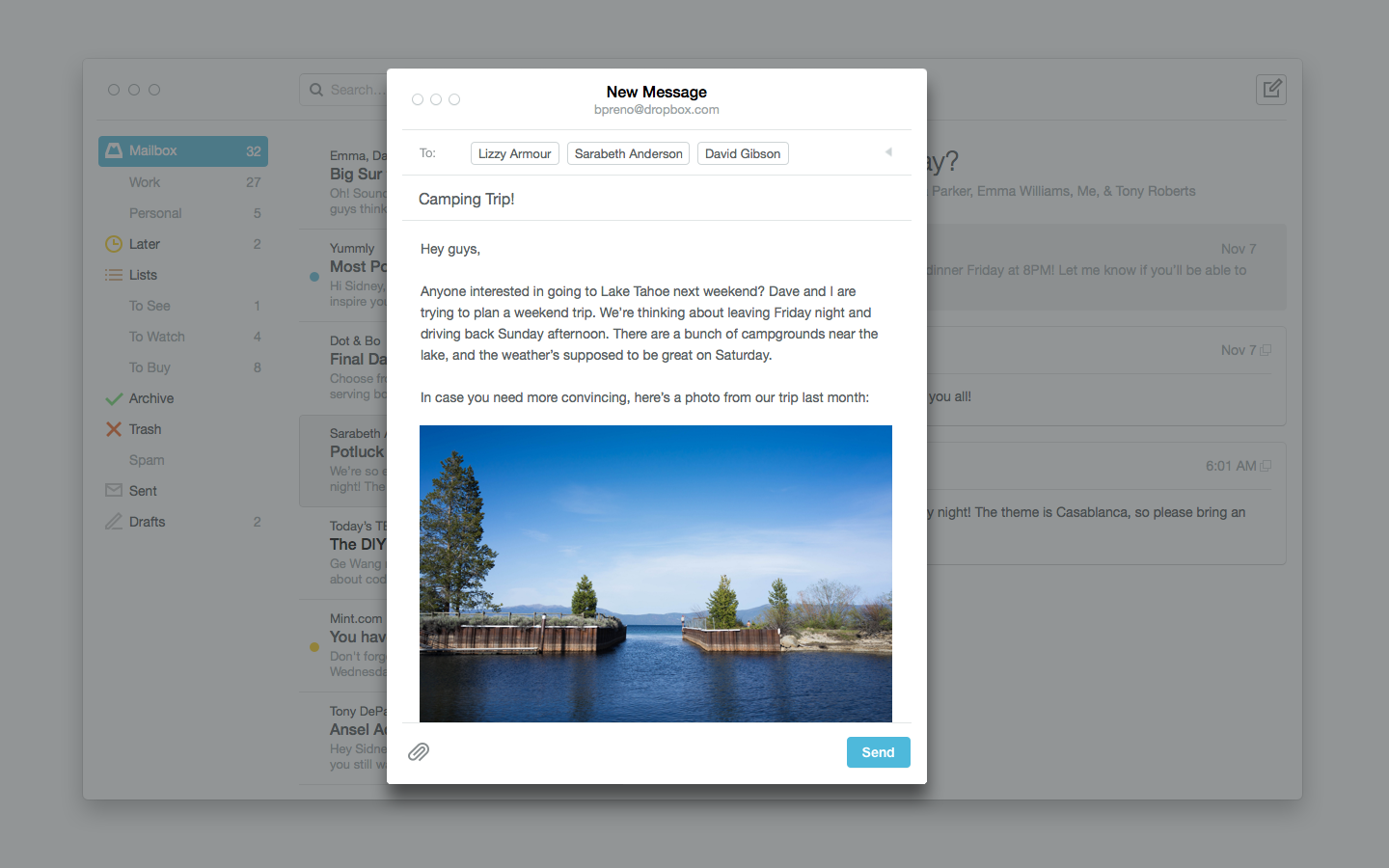 So, you have to trust Mailbox to communicate all these abstracted changes back to your actual email provider (as you have with previous versions of Mailbox), but in my tests, it’s all gone down without a hitch. Since trying out the app several weeks ago, I’ve returned to Gmail on the web only to search for old items and contacts that Mailbox was taking too long to find. The beta app’s search is buggy, to say the least, although Mailbox says that search is still an area of intense focus for the final stages of the beta. Besides the occasional search, Mailbox has replaced the entire front-end interface for how I interact with email. With Mailbox on both desktop and mobile, it’s easy to forget that you’re dealing with IMAP email at all.

Even if Mailbox doesn’t ever add Exchange, it will have influenced the designers who work on Outlook

Yet, Mailbox is still very much only for a niche audience — people using Gmail and iCloud — in a world where so many businesses run on Exchange and require more advanced features. Only last week did Mailbox even add "print" and "report spam" functions to its app, at beta testers’ requests. And the app still doesn’t allow you to do things that have been possible for years in Google Apps and Outlook, like comparing calendars with a colleague to book meetings or flagging items for follow-up. Underwood admits, "There are some an intensely challenging tradeoffs between creating a simple, idealized workflow and supporting all the different ways people work."

It’s no stretch to imagine Dropbox acquiring an app like Sunrise to build out email-based scheduling, a common use-case. After all, to Dropbox, Mailbox is the means to an end, one piece of a larger puzzle. "What suite of tools would you want within an organization to get stuff done?" asks Underwood. "You can’t just answer it by where Mailbox is going, but [instead] by where Dropbox is going. We’re spending a fair number of design cycles on the next generation of Mailbox and Dropbox, and how those things fit together."

Mailbox still has plenty of work to do, even on the homefront. There are lots of bugs in the Mailbox for Mac beta, and there are still more email services to add like Exchange and Yahoo, which Underwood says his team is thinking about. But, much as Sparrow did before it, Mailbox is paving the way towards a future where email works faster, syncs instantly between all your devices, and just acts more like the other modern communication apps we use today. Even if Mailbox doesn’t ever add Exchange, it will have influenced the designers who work on Outlook, and on any email app henceforth. This might be Sparrow’s greatest legacy, that it challenged us to think of email in a different way. With its new Mac app, Mailbox has now picked up the torch.