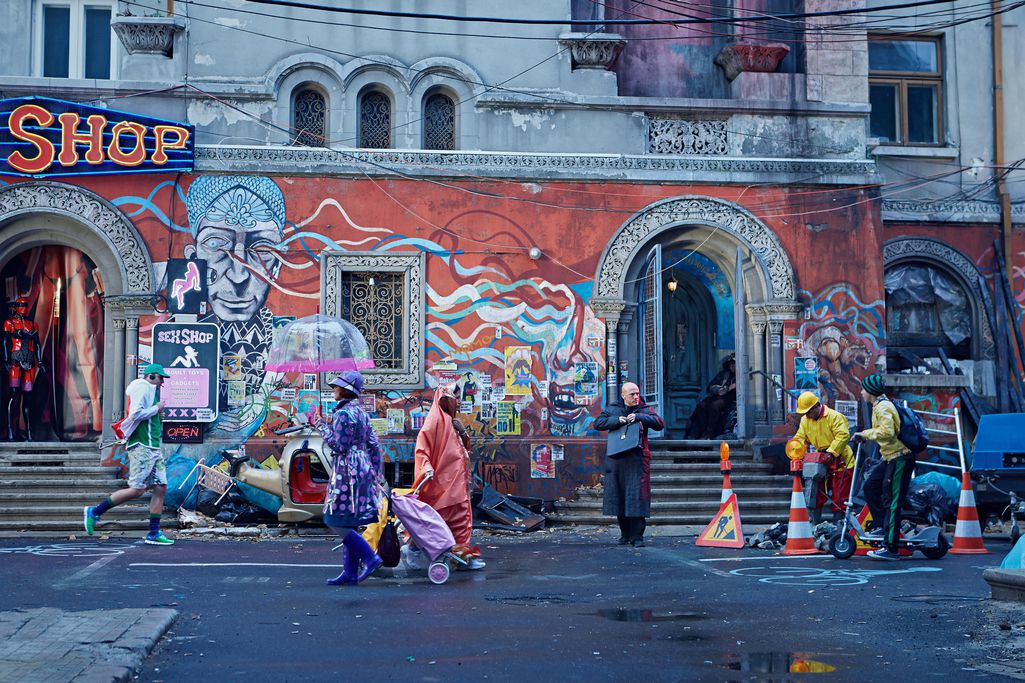 Not long into The Zero Theorem, we see our bald hero, Qohen Lethe (Christoph Waltz, Django Unchained) step out of his dour church home and into the bright, garish street. He’s assaulted with a visual and auditory parade. There’s an advertisement that follows us down the street, like a pop-up ad that you can’t quite find the close button for. A sign for the Church of Batman the Redeemer passes in and out of view as citizens of this dilapidated future (or alternate present) city chatter in bright plastic jackets. Eventually he makes his way to his job, which involves hidden hands trading liquid vials of computer data while Qohen pedals furiously at his blinking and blooping workstation.

For fans of Terry Gilliam (and I count myself among them), it’s nothing less than a jackpot. Kafkaesque bureaucracy that’s hilarious and terrible at the same time? Check. Downtrodden but nevertheless hopeful central character who will serve as our guide in this alien otherworld? Check. Visuals that are low-rent, but surprisingly imaginative and whimsically horrible? Check, check, and check. It seems like it’s nothing less than a return to form for the director who brought us Brazil and Fear and Loathing in Las Vegas.


Qohen appears to us as a crack programmer — technically they call him an "entity cruncher." He’s also a crackpot, telling anyone who will listen he’s waiting for the phone call that will tell him the meaning of life — the search for which, of course, will make up the bulk of the film. Management, played by Matt Damon with an enjoyable deadpan humor, eventually assigns him to work from home on the titular Zero Theorem. The theorem amounts (spoiler alert) to a mathematical proof that everything in the universe adds up to nothing.

In setting up this conflict for The Zero Theorem, Gilliam hits as many of the modernist, Theater of the Absurd tropes as possible, so many that it starts to feel like overkill. The delirium doesn’t last. Qohen locks himself in his church home, making for a much more somber — even boring — film in the second half.

Maybe the best thing about The Zero Theorem is that if you want to understand it at all, you have to jump into the kind of literary analysis most of us don’t bother with outside of an English lit class. But that’s also the worst thing: you spend as much time grappling with abstract ideas as you do experiencing the movie. I have two (conflicting) takes on those abstractions. One of them makes this movie terrible and boring, the other inventive and deep — but either way watching this film simply as a film is going to leave you nonplussed at best.

We watch Qohen slowly going mad as he tries to solve the Zero Theorem. He’s visited by what few other characters this movie has, all of whom are there to goad Qohen back into crunching his entities. Besides Waltz’s brooding and vamping, the only actor who manages to portray any real emotion at all is Mélanie Thierry, playing Bainsley. But when a movie’s sole living female character (there’s also a computerized shrink played by Tilda Swinton) is playing out the hooker with a heart of gold trope, let’s just say that this film spectacularly fails the Bechdel test.

In point of fact, this movie seems to be little more than anybody talking about a man, and that man is Qohen and his existential dilemma. The film is so literal about presenting its philosophical conflicts that it tends to turn into a bit of a slog despite Gilliam’s attempts to inject humor and absurdist whimsy into the closed-door proceedings.

This is perhaps Gilliam’s most Kafkaesque film ever

By putting this nihilism vs belief debate so explicitly on the surface of the film, it ends up sucking most of the depth out of its philosophical underpinnings. This is perhaps Gilliam’s most Kafkaesque film ever, but Kafka himself would never have been so blatantly obvious. Most of the movie takes place in an abandoned church (you might call it a tomb and sepulchre of God) where the crucifix itself epitomizes the film’s themes. Even Qohen’s penchant for referring to himself in the plural feels like a heavy-handed plea for the viewer to add meaning to the proceedings.

But the film’s symbolism sticks with you and, eventually, I wanted to believe that there was more to it than I thought at first. When I watched it again, I found myself thinking that the existential angst isn’t the real subject, but is actually just another metaphor. If you think of The Zero Theorem not as some retro-future, but instead as a bizzaro, physical internet, that pop-up ad that follows Qohen around and the liquid vials of data take on a deeper (or at least more interesting) meaning. Qohen’s pronouns make him the generic user, not a medieval everyman. The party where everybody is dancing with their tablets and headphones out, lit by the glow of electronics is a symbol for the singularly solitary feeling internet communities foster.

Watching somebody calculate the meaning of life feels boring, but watching them try to make sense of the internet somehow doesn’t. Like the astral vortex that serves as a recurring nightmare for Qohen, The Zero Theorem asks you to drop into the black hole of ever-deeper interpretation. It’s just barely worth the leap.

The Zero Theorem is currently available on iTunes and other on-demand platforms. It'll open in theaters September 19th.