As part of Verge Hack Week, we've invited great minds from around Vox Media to contribute their thoughts on the future of everything — from food to fashion to the written word. In this installment, we welcome Vox Media product team coordinator Mike Case.

There is a lot of government in the United States. Several hundred federal agencies, 535 voting members in two houses of Congress, more than 90,000 state and local governments, and over 20 million Americans involved in public service.

We say we have a government for and by the people. But the way American government conducts its day-to-day business does not feel like anything we, the people weaned on the internet, would design in 2014. Most interactions with the US government don’t resemble anything else we’re used to in our daily lives. When we need to shop, we’re used to using our smart phones to visit Amazon where we know we’ll see carefully customized suggestions based on our purchase history. We pay for same day delivery and can track the location of our package as it moves around the warehouse, onto a truck, and towards our home. Hell, we can do the same thing with a pizza order.

Interacting with any level of government isn’t nearly so convenient

Interacting with any level of government isn’t nearly so convenient. Government websites are notoriously frustrating trips back in time, and it’s virtually impossible to find out all the ways government could potentially help you. Lines at the DMV are miserable frustration parties. During tax season, the IRS asks us to do the calculations to make sure they’ve taken the right amount of money from us. It’s all a little crazy, if you think about it.

But it’s not just bothersome inefficiencies — government shortcomings are downright tragic when they cause delays in processing disability claims, make it hard for citizens to vote, or fail to connect veterans with medical care. Government is huge and irreplaceable, so it has to do better.

Government’s recent run-ins with technology don’t offer much hope. The HealthCare.gov debacle is fresh on Americans’ minds. A frustrating lack of technical understanding made recent FCC rulings sadly comedic. And there is probably no more devastating counterargument to giving the authorities more sophisticated technology to interact with citizens than the ongoing NSA scandal.

But there are plenty of reasons for positivity, too. Long before the internet, the federal government took on the unprecedented challenge of processing information about millions of Americans for a new social program by building the Social Security Administration and arming it with cutting-edge computers. The White House has put together some fairly modern tools for citizens to petition the executive branch on some pretty niche issues. And the Consumer Financial Protection Bureau, built from scratch in 2011, has shown that the federal government is capable of embracing modern and usable systems. So what does more innovative, more efficient, more futuristic government look like?

Imagine a single, central website that could answer any question you had about government and whether it can help you

Well, first of all, we’d have an easy way of knowing what the government can do for us. In a time when it’s hard to get an accurate count of even the number of federal government agencies, it would be a huge improvement to have easy and clear access to all the ways your tax dollars are at work. That means a better web presence for all levels of government.

Imagine a single, central website that could answer any question you had about government and whether it can help you. One portal where you could log in, and with a tool as familiar as Google search, ask: "how can I apply for a passport?" "is it illegal to fish without a license in Washington, DC?" "where do I vote?" "what do I do if my disability claim is taking too long?" "what forms do I need to establish my business?" No matter your query, you are met with an actionable answer, or a way to contact a human being who can help you with your request.

Just knowing what’s available is hard enough, but knowing what part of government you should approach can be even more maddening. So putting together a single online resource like this is no small task. It would require the collaboration of local, state, and federal governments and agencies that have immense amounts of overlap in their missions and are very protective of their individually appropriated budgets. Staff at every level and in every agency would have to standardize processes and databases so they could talk to each other, or at least to a central organizing mechanism. And it would require a bunch of human beings to manage it.

Now imagine you’ve gotten a useful answer from that website, but you need to sign some forms, have a photo taken, or take a test. For one reason or another, you need to interact with a human being face to face. What if there was one place in every community that could deliver all government services? Post offices are ubiquitous across America — what if they could be retrofitted to also be Social Security offices and DMVs and passport offices and polling locations? What if folks who aren’t comfortable with fancy, modern websites could walk into their post office and have any question about government answered for them? Yeah.

What if there was one place in every community that could deliver all government services?

The problem is logistics. Sure, the Postal Service would probably love to have some fresh resources to boost up these facilities. But consolidating many offices into one is never easy. And reappropriating human resources would definitely be controversial. But with good digital systems to reduce paperwork, remember previous encounters with citizens, and greatly reduce the need for people to visit brick and mortar offices in the first place, it’s certainly feasible.

Will it ever happen?

How close are we to this — or any — version of the future where our government is easy to understand and effective at delivering services? Well, over the last few years the federal government has put some effort into developing better digital tools, and has seen some success in "liberating" data locked away on agency servers for public use. Open data initiatives like Data.gov are a big deal, but they put the onus on the American people to do something interesting and innovative with all that information. 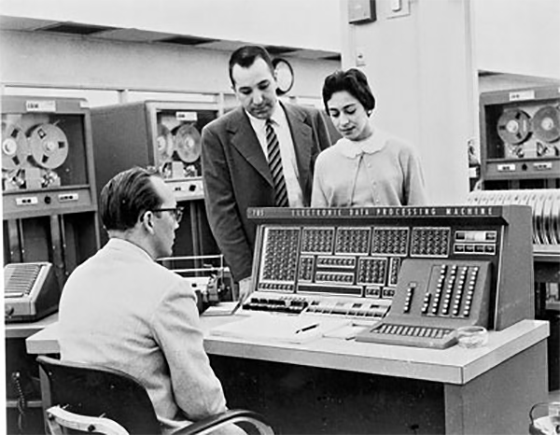 In a lot of ways, that’s a good thing. We, the people, are generally more willing to take risks and try innovative things. Entrepreneurs have used public data to drive successful businesses. Nonprofit organizations like Code for America rally hackers and makers across the country to pitch in to make apps and tools that help less savvy citizens utilize state and local systems.

The White House has also taken steps to bring fast moving digital natives into the fold at the the highest levels of government, tapping the skills of a rotating set of Presidential Innovation Fellows and, more permanently, establishing the United States Digital Service. That group — based on the United Kingdom’s Government Digital Service — will act as consultants to other federal agencies, helping them modernize their services.

But if the government is ever going to completely retool itself to provide sensible services to a growing, aging, diversifying American population, it will have to do more than bring in a couple innovators and throw data at the public. At the federal level, these kinds of adjustments will require new laws to change the way money is allocated to executive branch agencies so they can coordinate the purchase and development of a standard set of tools. State and local governments will have to agree on standard tools and data formats as well so that the mayor of Anchorage can collaborate with the governor of Delaware.

Technology is the answer to a lot of American government’s current operational shortcomings. Not only are the tools and systems most public servants use outdated and suboptimal, but the organizations and processes themselves have also calcified around similarly out-of-date thinking. So the real challenge won’t be designing cutting edge software or high tech government facilities — it’s going to be conjuring the will to overcome decades of old thinking. It’s going to be convincing over 90,000 employees to learn new skills, coaxing a bitterly divided Congress to collaborate on something scary, and finding a way to convince a timid and distracted White House to put its name on risky investments that won’t show benefits for many years.

But! If we can figure out a way for governments across the country to perform their basic functions and provide often life-saving services, maybe we can move on to chase even more elusive government tech unicorns. Imagine voting from your smartphone, having your taxes calculated and filed automatically with a few online confirmations, or filing for your retirement at a friendly tablet kiosk at your local government outpost. Government could — feasibly — be not only more effective, but also a pleasure to interact with someday. Someday.

More from this stream The future of everything