Just in time for the launch of its Moto X successor, Motorola also seems to be preparing a new revision of Skip. The tiny accessory first debuted last year alongside the Moto X and, with the help of NFC, let owners bypass the phone's lockscreen entirely and "skip" the monotonous task of thumbing in a passcode or pattern. This year, it looks like Motorola is aiming to make Skip a bit more useful so it won't become a forgotten toss-in like its predecessor.

According to new filings at the FCC (first spotted by Droid Life), the second-gen Skip will quickly get you right to your phone's home screen whenever the two devices are in close proximity — just like the first model. But this one will also help you find a misplaced phone. Double-pressing the power button will make your nearby Android phone ring so it's easier to locate. This could prove a huge help if you're on your way out the door somewhere, though you'll probably need to stick with Android Device Manager if you completely lose track of your phone.

This tracking also works in the opposite direction; theoretically, if you attach Skip to your keychain, losing your keys will become next to impossible. Using an upcoming Moto app (which will also be available for other Android smartphones), you'll be able to see where your Skip was last connected. When you get within range of finding it, Skip will start beeping to help your search. Motorola's user manual says the small device will last about a year on a single battery, and it relies on Bluetooth to pull off most of its functionality. We don't know anything about pricing or release date, but expect to hear those details during Motorola's upcoming press event on September 4th. 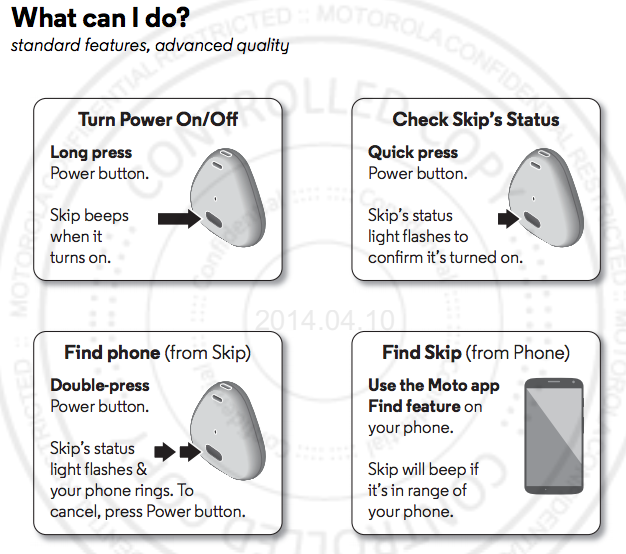