HTC One M8 for Windows review

Share All sharing options for: HTC One M8 for Windows review

The classic Oreo cookie is a wonderful thing. (By classic, I mean the Double Stuf, let’s be real here.) It’s the right combination of crunchy and soft, sweet and, well, more sweet. It’s the best cookie ever and I won’t hear any arguments.

But that hasn’t stopped Nabisco from messing with the formula. The company has released dozens of variations on the idea: different cookie flavors, different filling, different experiences. Some have been a great success, others never should have left the lab. But the thing they have in common is they are all Oreos, and you can spot one as such instantly.

The HTC One M8, launched earlier this year, is like that classic Oreo. Its design, performance, and usability make it one of the best, if not the best, Android phones released this year. It’s an iconic flagship that holds together the rest of HTC’s lineup. And just like Nabisco, HTC has released a variation of the One M8 that’s the same on the outside, but wholly different on the inside. The One M8 for Windows has the exact same hardware and design as the original M8, but in place of Android 4.4 KitKat, it’s running Microsoft’s Windows Phone 8.1. It’s available from Verizon Wireless now for $99.99 with a new two-year agreement.

Each time Nabisco releases a new, different Oreo, it runs the risk that the cookie will be a dismal failure. (I’m looking at you, cookie dough Oreo.) Same goes for HTC: the M8 for Windows could be a failure that never should have seen the light of day — or it might be a wonderfully tasty alternative to the original.

As I noted already, the hardware of the One M8 for Windows is exactly the same as its Android counterpart (it’s the “cookie” in our Oreo comparison). It has the same unibody, aluminum design, same 5-inch, 1080p display, same high-end, quad-core Qualcomm processor, same 2GB of RAM, same 32GB of storage, same microSD card slot, same 4-megapixel UltraPixel camera with same secondary depth sensor (aka HTC’s Duo Camera). The M8 for Windows can even work with HTC’s Dot View case. Save for the camera, which is merely okay, that’s all good news: the One’s screen is fantastic, the design is gorgeous, the front-facing speakers are loud and sound great, and the processor is fast and powerful.

The M8 is far more elegant. It’s just nicer to hold in my hand than recent Nokia phones like the Lumia Icon / 930. Nokia does make some well-designed phones, but its plastic devices aren’t up to the caliber of the M8’s premium all-metal body.

Our original M8 for Windows hands-on.

But I’m not going to dwell too much on the hardware here, since the main difference between the original M8 and the M8 for Windows is the software. For a great rundown on the M8’s design and hardware, read our review of the Android model and watch our interview with former HTC head of design Scott Croyle.

Plus the software experience, just like the creme of the Oreo cookie, is what really makes or breaks a smartphone.

The One M8 for Windows comes with Windows Phone 8.1 Update 1, the latest version of the platform from Microsoft (you could also call it Windows Phone 8.1.1, which is way easier to understand). The new software includes a notification center, folders on the start screen, and Microsoft’s virtual personal assistant Cortana. Save for the new folders, it’s not very different from Windows Phone 8.1, which we covered in depth earlier this year.

Windows Phone 8.1 is a significant step forward for the platform, bringing it up to speed with many of the features found in iOS or Android these days. I’m particularly fond of Cortana, which does an excellent job of blending Google Now’s functionality with Siri’s personality. It’s proven itself more useful than Siri on a number of occasions, such as setting location-based reminders or getting an overview of my day.

Yet despite the advancements in Windows Phone as a platform, it still falls short in the third-party app department, and this becomes painfully obvious when you compare the Windows M8 next to the Android version. Though Microsoft has worked very hard to expand the Windows Phone store’s options to over 300,000 apps and has gotten some big-name apps on the platform, such as Instagram and Uber, the Windows Phone versions are almost always inferior to their Android or iOS counterparts. For example, while Instagram for Android and iOS has had the ability to record video and tweak images extensively for some time, the Windows Phone version of the app offers neither of those features. You get the basic filters and nothing more. The same can be said for Twitter, Facebook, and many others.

HTC has worked to develop its own apps for Windows Phone, so the M8 for Windows is able to take advantage of its special hardware features and HTC’s services. Sense TV, which offers an interactive guide to what’s on TV right now and lets you control your entertainment system with the M8’s IR blaster, has been rebuilt for Windows Phone. BlinkFeed, HTC’s news reader and social aggregation service, has also been brought over to Windows Phone, residing in a live tile on the start screen. It looks and behaves just like BlinkFeed does on Android, and it doesn’t really conform to the Windows Phone style of design. But it works just fine and I actually prefer it as a tile on the start screen rather than hidden behind another home page as it is on Android.

HTC also built in support for some of the M8’s gesture functions, such as double-tap-to-wake, and the Dot View case can display time, weather, email, messaging, and calendar notifications through its translucent panel. You can also launch Cortana and perform voice actions by just swiping down on the front of the Dot View case when it’s still closed.

But the most important thing HTC did for the M8 for Windows was build its own camera app to support the M8’s unique depth-sensing Duo Camera. With HTC’s camera app, you can control things like exposure and filters, or refocus your images and create 3D-like effects after the fact. The interface is exactly the same as it is on Android, which is mostly a good thing, and it’s fast and easy to use (and the Android design doesn’t really clash with Windows Phone here). The only thing that’s really missing from HTC’s camera app is the ability to record Zoes, short movie clips that can be shared to HTC’s social platform. Unfortunately, the camera itself isn’t any better on Windows than it is on Android, with many images lacking the sharpness found on other smartphones. If pictures are a number one priority for you, you’re still better off going with one of Nokia’s Windows Phone options.

Though the M8 for Windows has the same processor and RAM as the Android model (it’s a 2.3GHz quad-core Qualcomm Snapdragon 801, for those interested), it doesn’t perform as smoothly or as quickly as its Android counterpart. Everything feels a little slower on the Windows version for some reason, with animations that stutter and hesitate. It’s a bit out of character for the M8, which is a very fast and responsive Android phone, and for Windows Phone in general, which is usually snappy and responsive on even the most basic hardware. Perhaps HTC has some tuning to do to make Windows run better on the M8’s hardware.

Fortunately, the M8’s solid battery life is as good or better on the Windows version. I was able to get through a full day of moderate usage without having to charge it, and if I used it less often, getting the M8 to last into day two wasn’t an issue. The battery life on the M8 is as good or better than any of the recent Nokias I’ve used, including the gargantuan Lumia 1520.

So which Oreo is the One M8 for Windows? If the Android model is the classic Double Stuf, the Windows model is the chocolate creme Oreo. It’s not bad by any stretch, but it’s not as good as its forebear, and it’s not the right One for most people.

That point is exacerbated by the fact that you can buy the Windows version of the One M8 only from Verizon right now, while the Android model is available across every other US carrier and in many countries across the world. (AT&T has announced that it will carry the One M8 for Windows in the future, without naming an exact release date. Sources familiar with the matter tell me that Verizon’s exclusivity window may be as short as 60 days, which means a few more people could have the option to buy it relatively soon.) HTC hasn’t been able to tell me anything about international launch plans for the Windows M8, which is disappointing because there is greater interest in Windows Phone overseas than here in the US.

Further, while you can get the Android version of the M8 in a variety of colors, the Windows model is only available in graphite gray, which, like the chocolate Oreo, isn’t a flavor for everybody.

Fortunately though, the One M8 for Windows does have a lot of good qualities, and if HTC is able to improve the few performance issues I saw via software updates and fixes, it could be a compelling option for a select number of people interested in Windows Phone but looking for something other than Nokia’s offerings.

And hey, at least it’s not the cookie dough Oreo.

Our review of HTC One (M8) for Windows 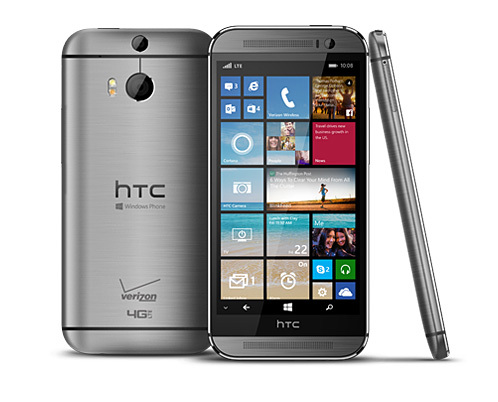