The littlest Rapture: we played 'BioShock' on an iPhone

The littlest Rapture: we played 'BioShock' on an iPhone

No gods or kings, only touch controls

BioShock is an absolutely classic video game, and anyone who likes action games should play it at some point in their life. Its "underwater Ayn Rand" premise is great, it contains one of the most memorable video game speeches of all time, and the combination of conventional weapons, psychokinetic powers, and hacking is open-ended without being too complicated. And as of today, you can purchase a version of the original BioShock, packed down to fit in a tiny 2GB package, for $15 on the App Store. It's an ambitious goal, and in the interest of pursuing the most mobile mobile experience out there, we skipped the iPad and played through the first level on an iPhone 5S.

Please, for the love of Andrew Ryan, don't try playing BioShock on the iPhone. 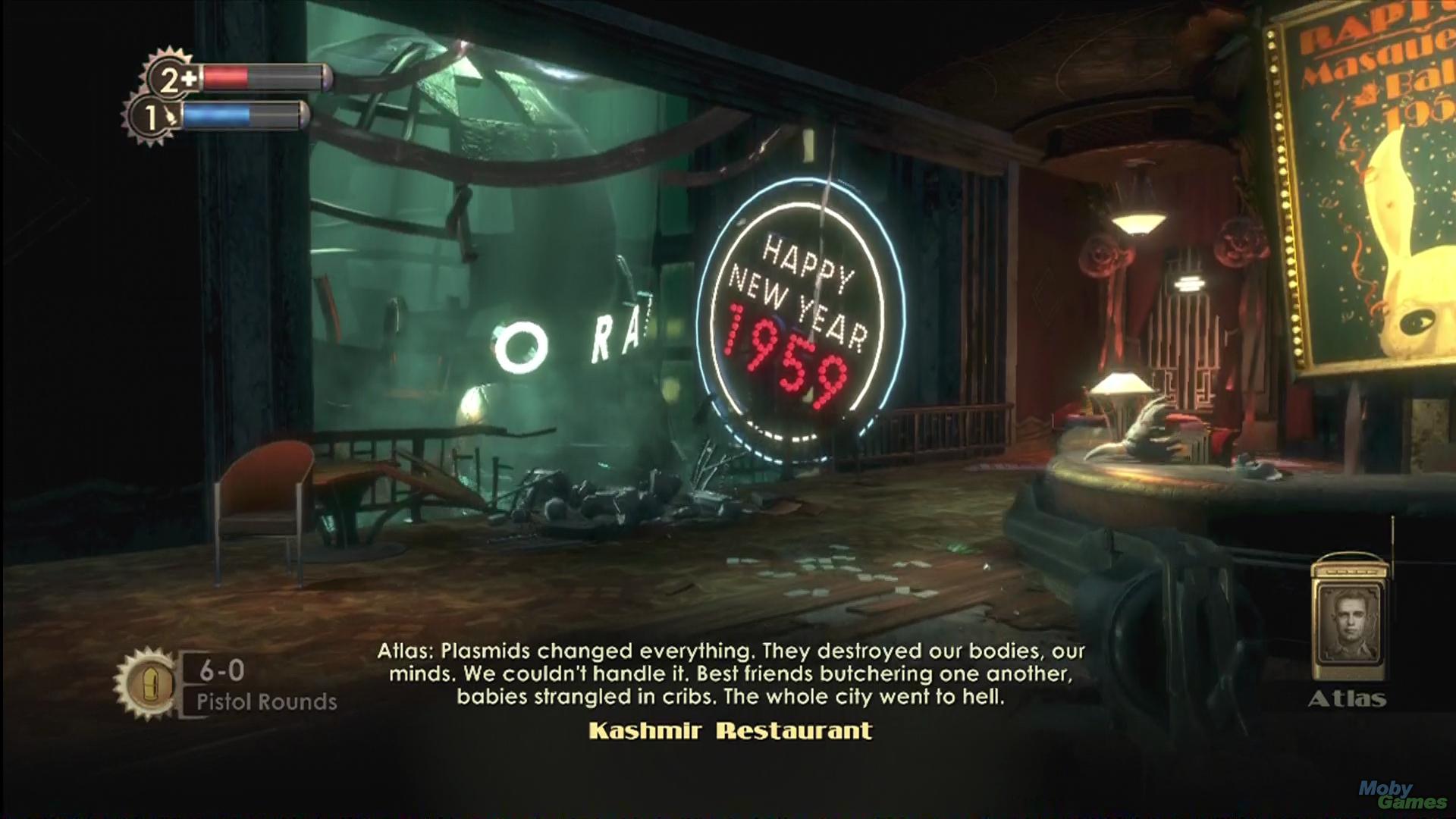 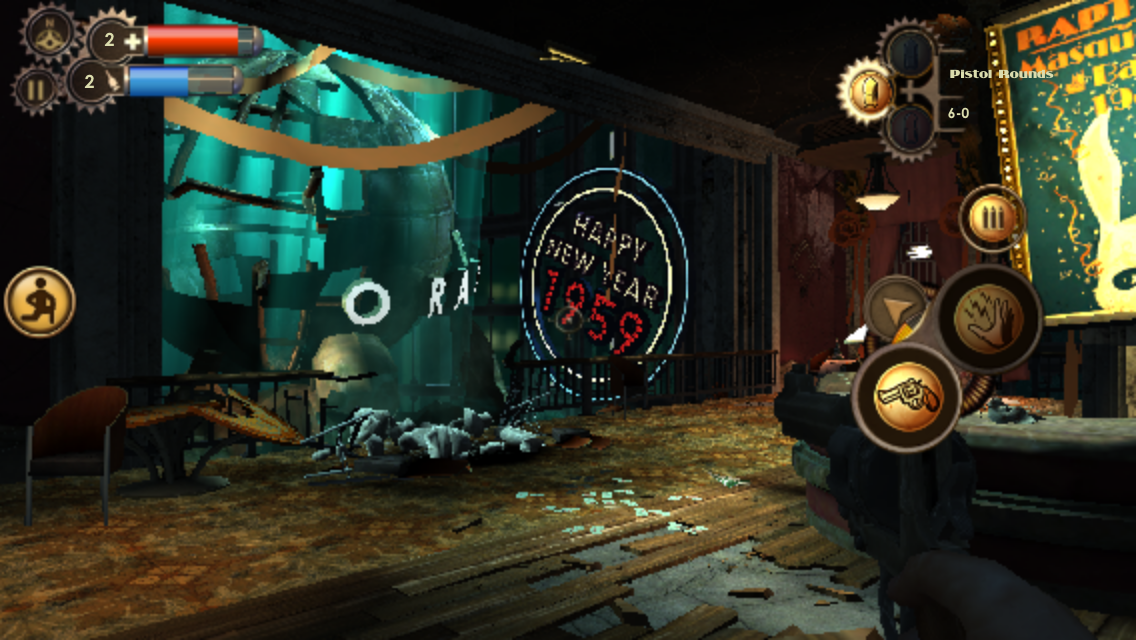 BioShock is trying to do the same thing Doom, Max Payne, and other games have attempted: make first-person shooters work on a touchscreen. Shooters designed specifically for mobile devices (including installments of Dead Space and Deus Ex) have managed to simplify controls and adapt environments for a smaller screen that's partially covered by your hand, but BioShock has done what most ports do: add an overlay with invisible moving and aiming sticks and buttons for crouching and shooting. This is always troublesome, and there are more variables than usual here: you're not just switching weapons, you're juggling weapons and plasmid powers, which means you've got two attack buttons right next to each other. Weapons can have multiple kinds of ammunition, so there's another button for that, plus a button to refill the EVE that powers your plasmids. Many mobile shooters let you customize touch controls, but perhaps because of this complexity, I didn't see the option here.

BioShock, at least in its early levels, is a pretty forgiving game. But breaking away from aiming to hit the attack button and making sure you're using the right one takes more coordination than a controller or mouse and keyboard. The overlay looks handsome and very much integrated into the larger aesthetic, but it's still giving you a lot of information to process. The rest of the interface looks pretty much identical to its larger counterpart, with a couple of added buttons in the corner for your map and options. On the iPhone, those buttons are really tiny. 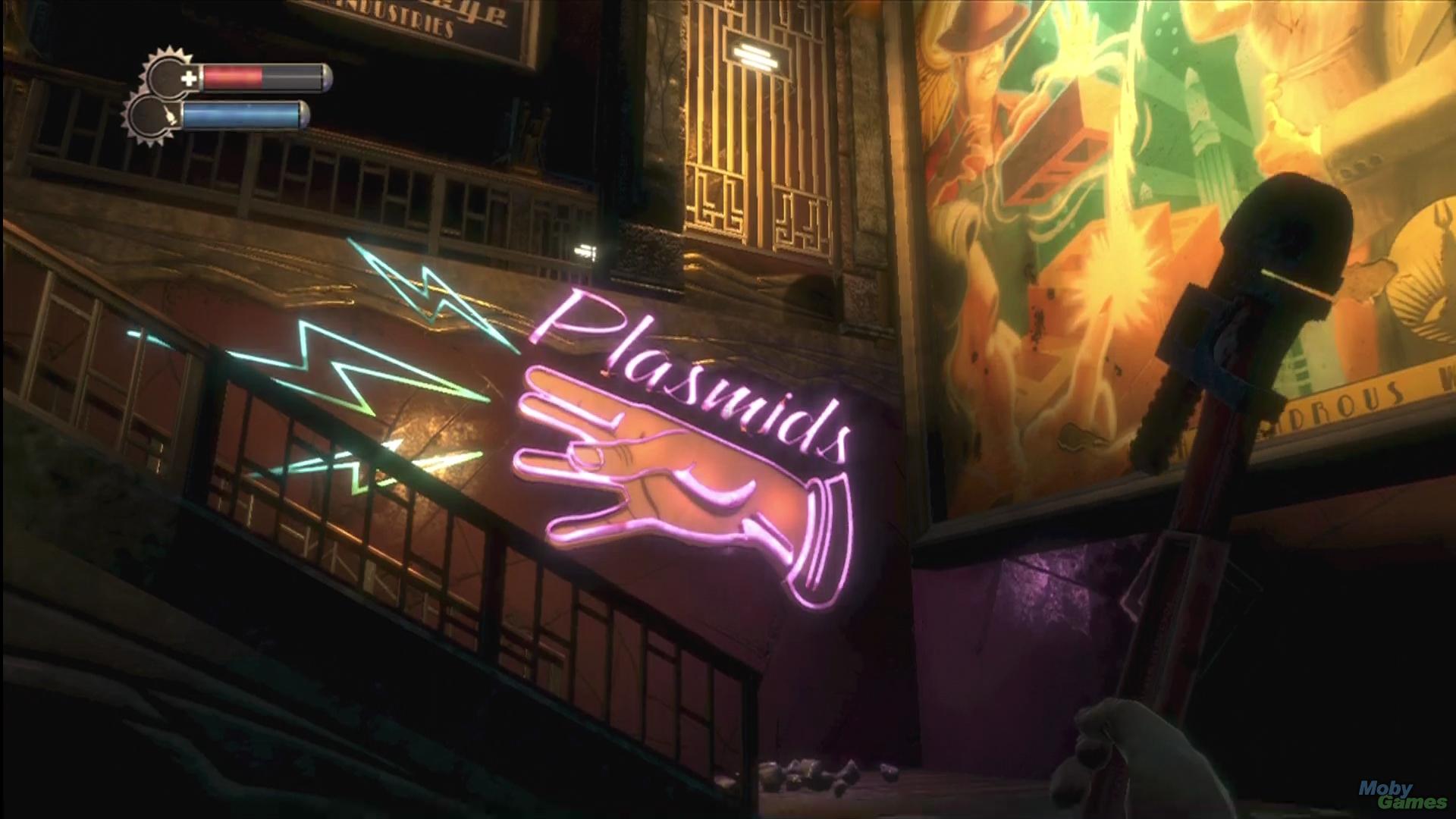 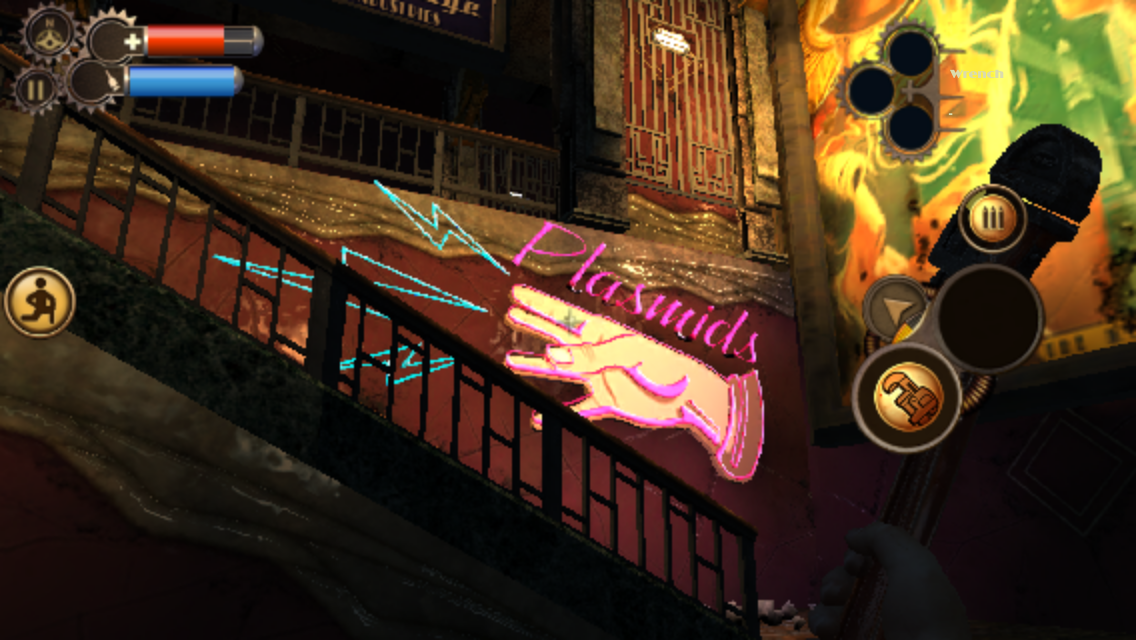 It's been seven years since BioShock came out, but taking it from a console to a phone has required a lot of corner-cutting. It runs very well, although you'll have to plug it in for long sessions — I played somewhere around half an hour and drained 40 percent of the battery. But its already long loading times are even longer, and graphics look significantly chunkier and high-contrast. This feels like a bigger change here than it would be for other games. BioShock on console was dark and, for lack of a better word, a little slimy. Everything seemed to be coated in some sort of jelly, maybe the same jelly that enemies had instead of blood. On mobile, it has a tinny, gradient-heavy, '90s feel, like the original Thief. We've attached some screenshots for comparison here, alongside Xbox 360 images courtesy of MobyGames. 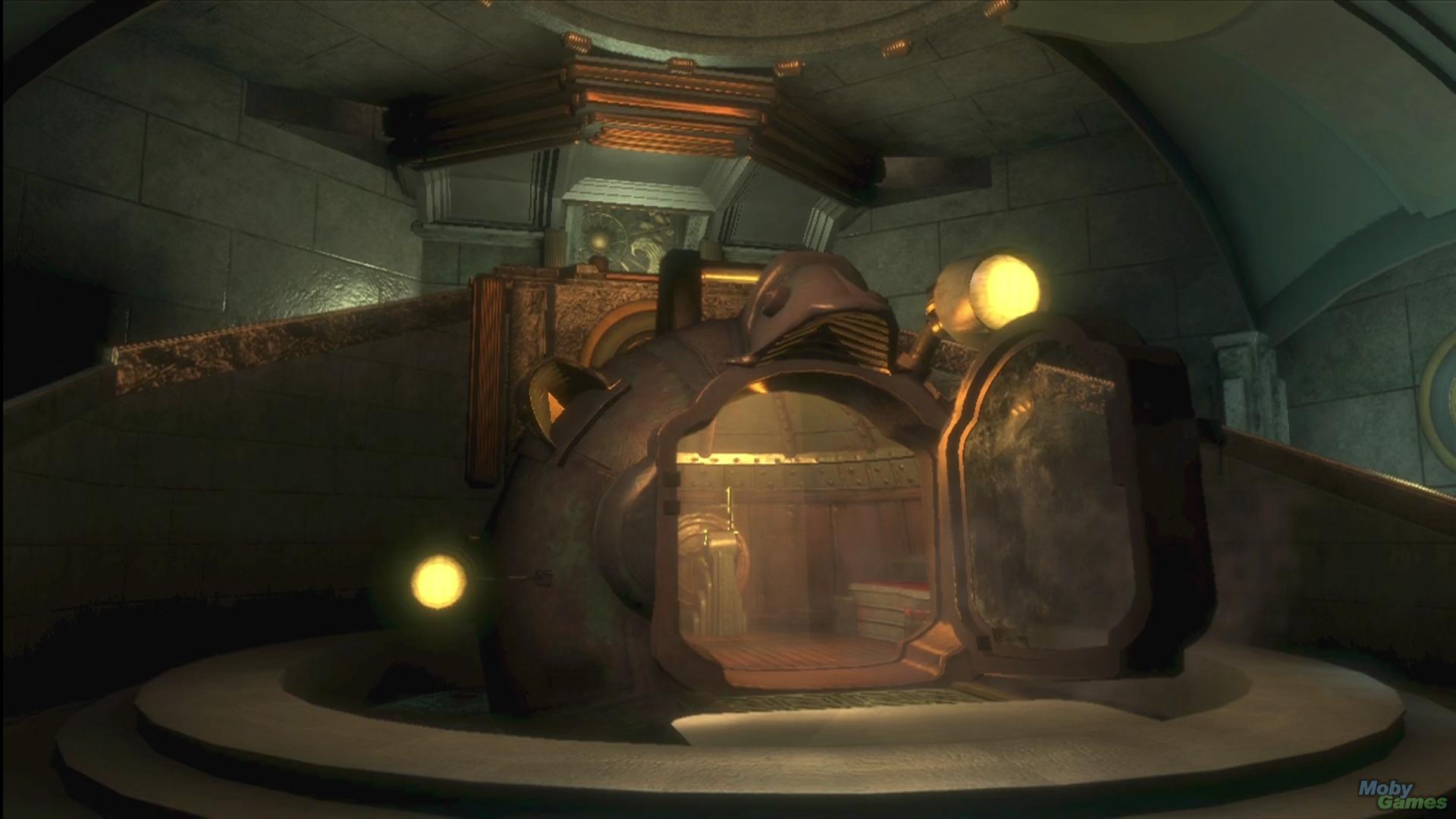 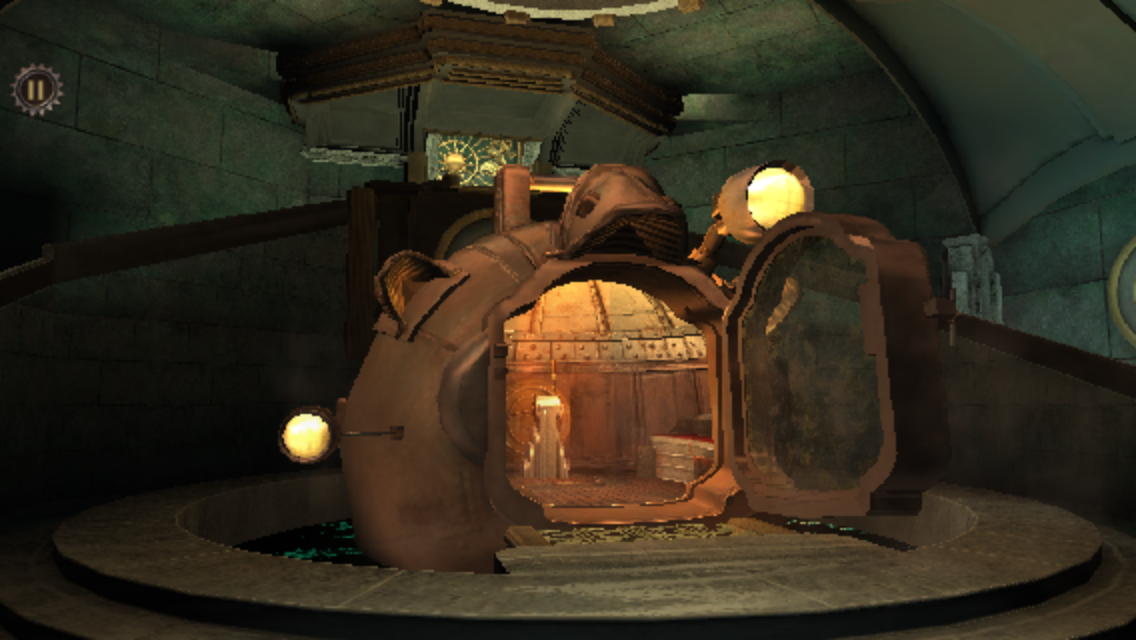 As a port of a first-person shooter, the mobile version of BioShock isn't bad. It would be a somewhat better experience on iPad, although you'd still be dealing with a touchscreen interface. But it's not immediately clear why you'd want it. If you want to play a mobile shooter, there are much better non-ported options. At $15, it costs only $5 less than the Mac version sold in the App Store, and it's about three times as much as you'd pay on Steam during a sale. It's widely available for consoles, and you'll probably be able to run the desktop version just fine if you own a computer, unless you're using a Chromebook or a truly bare-bones PC. Even if you're not used to gaming with a mouse and keyboard, it might be easier than learning the mobile control scheme.

If you feel that 2K has earned your respect as a peer and this purchase seems like a fair exchange of value, only a looter would stop you from making it, whether through the heavy hand of the state or the cowardly words of fashionable non-conformists. But I am definitely expressing doubts about whether buying BioShock on iOS is really in anybody's enlightened self-interest.