Any way you look at it, Tim Wu is an unlikely candidate for public office. The Columbia law school professor who coined the term "net neutrality" is a public intellectual better known for his academic work than his political activism. But he entered New York's Democratic primary when Zephyr Teachout, a fellow law professor and activist, asked him to be her running mate in a long-shot challenge to incumbent Governor Andrew Cuomo. The current lieutenant governor, Robert Duffy, is not seeking reelection, so Wu faces Cuomo’s chosen successor, former Congresswoman Kathy Hochul.

Internet activists have long supported Wu’s writing; now he’s asking them to support his campaign. Cuomo has challenged the petitions that Wu needs to get on the ballot, saying they are invalid, and said Teachout has not lived in New York for the required five years before running. Fighting these challenge is a costly distraction, which is why they are becoming a more common move in political campaigns. Wu is trying to fight back with the help of crowdfunding platform Tilt, seeking $100,000 to fight the petition challenge.

Wu visited San Francisco last week to make a promotional video for his Tilt campaign, which goes live today. We spoke to him about his ballot fight, tech policy’s terrible year, and why there may be new reason for optimism on net neutrality.

Interview has been edited and condensed.

So why crowdfund your campaign?

I think the internet naturally abhors bullying. That challenge to our petitions is a bullying move, just legal bullying. So let’s see if the internet can help level the playing field. That’s one of the things the internet does — it tends by its nature to favor the little guy.

Sure. But why raise funds this way as opposed to normal fundraising channels?

There’s a real danger of having raised all your money from the wealthy. There’s the issue of feeling beholden afterwards. If you raise money from huge numbers of people, you feel beholden to huge numbers of people. If you raise money from a tiny number of very wealthy people, you ultimately feel quite beholden. You also feel like whatever their problems are become your problems. There’s nothing wrong with rich people, but a system that entirely relies on them is bad.

It seems like the idea is also that you are a person who advocates for issues that very vocal swaths of the internet support heavily, so maybe you can turn to them and say hey, put me in a position where I can do some positive things for you. And that way you can reach an audience that you otherwise couldn’t.

You’re best known for coining the term "net neutrality," the idea that carriers shouldn’t charge different prices based on the content they’re carrying. It seems like this has been a terrible year for that concept.

It has been a hard year. I reached a point of despair in about February. It was like wow, we’re hitting rock bottom. Actually, I thought we were hitting rock bottom with all tech policy — the NSA, net neutrality was gone, Comcast is merging with Time Warner Cable. What happened?

Well, what did happen?

"The powers of incumbency in Washington have won."

The powers of incumbency in Washington have won in the Obama administration. To the extent that there have been internal struggles, I would say California tech progressivism has been losing those battles. How is the NSA allowed to do what it wants? Because the national security forces have won over the privacy guys. The privacy guys are pushing back now, because of the publicity, but obviously that has come late.

I’ll say it again — tech progressives came to Washington and they were beaten.

It’s a pretty bleak picture. Looking back, were there missteps that were made?

Frankly, the only counterweight that anyone thinks about is Google. And they themselves have started to feel like they don’t want to be on the line for all this stuff. They’re retreating. So who does that leave?

Nonetheless, hope reigns. There’s always new optimism. I have a sense of new hope based on the 1 million petitions — when they reached that number, it really did something. The White House is starting to be like, what the hell is going on here? One in 300 Americans is taking time to write about this issue. That’s quite something. So I have cause for renewed optimism right now, but we’re still below where we were in 2008.

You’ve said that if you’re elected, you may be able to play a role in this on the state level. But how?

Maybe in less direct ways, like adding pressure to stop mergers. We have this huge problem of carrier consolidation right now, with Comcast being the most obvious. There’s just this new round coming. These guys are terrified of being what they should be, which is conduits. They want to build enough power to be able to extract money from the internet economy, essentially tax the internet economy. I don’t think it’s good for anybody — they already charge too much. The prices are ridiculous — in a way that’s not just like, aww, high prices. Because their cable bill is so high, people are feeding their children lower-quality food. It’s gotten to that level!

Internet mandatory, food not so much.

It’s a serious socioeconomic issue at this point. So I think the lieutenant governor can try to take care of things like that, and can start to shine a light on issues that don’t really get a lot of mainstream attention. The states are where the action is these days for a lot of policy areas.

You mentioned the proposed Comcast–Time Warner merger. Are you a Time Warner subscriber yourself?

You know, I quit recently.

How hard did they make that for you?

Well they make you return the modem in person, as you know. I called and said, "How about I mail it in?" They said "No, we don’t do that." What’s wrong with mail? "No, you have to come here, between those times." Otherwise your subscription never ends! It really is this Hotel California, where you can check out any time you like but never leave.

So I went there and it was like a refugee center, there were so many people trying to cancel. I asked how long it was going to be and they told me it was going to be two hours. But someone in the store said "Who’s here to cancel service?" and 120 hands went up, and they decided to process everybody quickly. It only took half an hour. I have some pictures of it, actually — I’ve never seen anything like it. 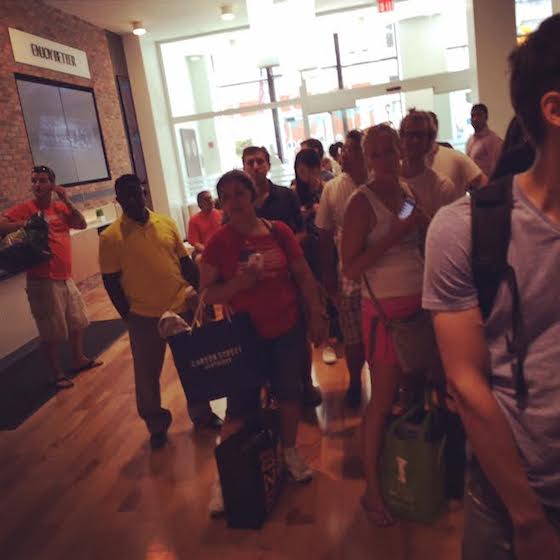 It does seem surreal. But as lieutenant governor, what can you do about it?

This gets into state law.

That’s exactly where I want to go.

There are multiple avenues by which states can block mergers that are not used right now. There is something called a Public Service Commission in New York that needs to approve any merger of a utility with another utility, and in New York, cable companies are classified as utilities. And I’m filing comments as a private citizen this week explaining why they should block it. That commission is independent, but you can suggest they pay strong attention to stuff.

And then it can also be blocked using the antitrust laws of the state of New York.

So this year Netflix made some high-profile "peering agreements" with various carriers, which many of us view as a violation of net-neutrality principles. If companies this big are throwing in the towel, does it even matter what an average person does?

Net neutrality is a policy that lets smaller operators have some of the same advantages the big companies have. Someone who’s trying to compete with Netflix can start, take their shot, win or lose, and they’re more likely to win or lose based on the merits. There’s a real danger with the payments from Netflix, YouTube, these kind of companies, to Comcast: it becomes virtually impossible to challenge them unless you have the same kind of deal they do. This is the real challenge created by these side payments, it's whether they make the internet incumbents impossible to challenge.

"This is the future of fundraising."

Do you think it’s a kind of contagion that will spread internationally?

Oh yeah. It’s already happening right now. In fact, it’s worse in Europe, especially in mobile. If you don’t launch with a carrier, you don’t really get started. The result is that the app market in Europe is just not particularly innovative or exciting. So I think it is a contagion.

Your Tilt campaign starts Monday. If you succeed in paying your legal fees this way, would you crowdfund other aspects of your campaign?

Absolutely. I think this is the future of fundraising. I think this would be a great thing for politics if the norm is that you raise small amounts of money from a huge mass of people.