Crashing into tubes in high definition

Flappy Bird is the only game I've ever played in which "I didn't die instantly!" counts as rousing success. I'm not good at it, which is sort of a strange thing to say when the only thing required is to tap on the screen at certain times and then not tap on the screen at certain other times. But the game made a comeback this weekend, and so did my Flappy Bird career. Kind of.

After a brief, glorious, impossibly lucrative run, Flappy Bird's creator Dong Nguyen took the game that had millions of people furiously mashing on their phone screen out of commission. But now, Nguyen has resurrected the game as a free, exclusive title for Amazon's Fire TV set-top box, called Flappy Birds Family. It's fundamentally the same game as ever, just reimagined slightly for a larger screen. Instead of tapping on the screen, you click the Fire TV's remote button, or hit A on the controller. You're still a low-fi, pixel-art bird flying through a series of Mario-style tubes, avoiding them and any other obstacle (there are new ones, like ghosts) for as long as you can. Which is probably not very long. 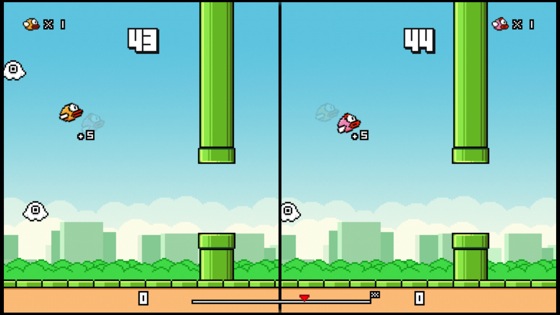 Multiplayer is an awesome new feature

The big new addition for the Fire TV is multiplayer, which sets up a split-screen race between two flappy birds. You get three lives, and you win by either finishing the course or just making it further than your opponent. You'll see your opponent's ghost flying through your course as well, which gets very competitive very quickly. It's a perfect tweak for the larger screen, and for the Fire TV, which has both a compatible controller and a remote — many owners will already have all the tools they need to play.

Actually, Flappy Birds Family is in general a perfect game for the Fire TV, or for any set-top box. It loads fast and sets up in no time — a commercial break is just enough time for a game or three. You can play alone on the couch or with someone next to you, with a remote or a controller. It doesn't require strange motion controls like Angry Birds on the Roku; you just click a button. Clicking a button is an activity at which your average couch-dweller already excels.

The game has no ads, and it's free to download, which likely means Nguyen either has broader plans for the game or has cut a deal with Amazon. That Flappy Birds Family could be good enough to sell $99 consoles is a crazy idea, but the game has a shocking history of making people spend money. Plus, Flappy Birds Family is fun, mindless, remarkably addicting (despite Nguyen's explicit attempts to the contrary, I can't stop playing it), and still as infuriatingly hard as ever. On the big screen, it's even harder to put down.