Kim Kardashian is not your friend

Kim Kardashian is not your friend

The weekend before last I retreated into the woods, far away from New York City, but this past weekend I was back and needed something to do. So, naturally, I downloaded Kim Kardashian: Hollywood on my Nexus 5.

If you haven't heard about the Kim Kardashian game by now I just, like, can't even. Even I'm late to the party. It's one of the most popular games on Google Play and the App Store right now, and it's reportedly raking in unfathomable amounts of cash for creator Glu — up to $200 million a year. I can't stop playing it, and that's a big problem, because the game would be amazing if it wasn't so goddamn terrible.

I'll happily confess that I love games like Kim Kardashian: Hollywood. Roleplaying is fun. I've been doing it for as long as I can remember, first in weird AOL chatrooms, then in EverQuest, and most recently in the game of Dungeons and Dragons that I haven't started with my colleague Dieter Bohn but really desperately want to. (Do you hear me Dieter? Can we play Dungeons and Dragons yet? My robe and wizard hat are ready.) The Kardashian game is almost the perfect form of mobile gaming confection; it's fluffy enough to tolerate on a small screen, the art is vibrant and expressive, and there's a clear objective to work towards with plenty of things to do along the way. But Kim will bankrupt you in the real world before you get where you're going.

"She take my money when I'm in need" 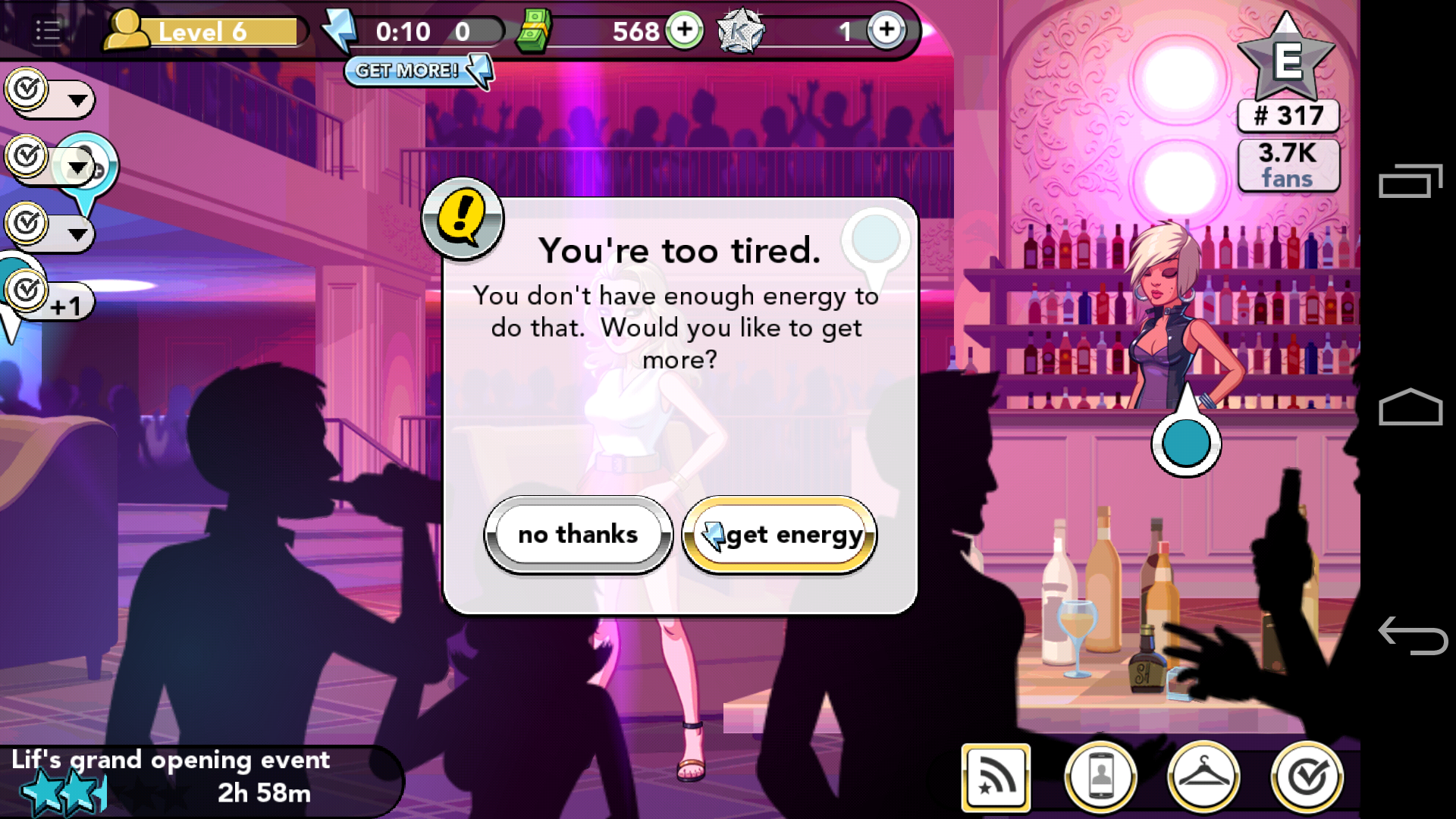 Kim Kardashian: Hollywood is compelling because it's hip. The first time you meet Kim she implores you to maximize your social media presence, throwing shade on someone for not knowing what Instagram is. Events in the game world are communicated via a Twitter-like stream with pithy headlines and gossip. You're thrown into a world that feels fully-realized, surprisingly so, for a mobile game.

I had fun trying to move my way up the first rung from an E-list celebrity to a D-list celebrity. I had fun trying to become more famous than the shit-talking actress Willow Pape by playing the field and making deals with the help of my manager and publicist. I had fun altering my character's appearance and sorting through the game's deep wardrobe options. I had fun until the game told me to stop having fun and to start paying up.

Like most "pay as you go" mobile games, there are several types of resources you need to progress. Some are interchangeable, and fortunately you start the game as an alchemist in addition to a shopkeeper. For instance, through some dark form of transmutation, you can convert "K coins" into "energy," which your character needs to accomplish nearly any of the game's tasks. There's also cold hard cash, which comes the easiest, but you can't use it for everything. K coins are king, and they're incredibly hard to come by without paying for them. And you'll need to pay for them if you want to do anything in the game for more than five minutes at a time. When I say that I played the Kim Kardashian game over the weekend, I mean that I picked up my phone about every hour, spent a couple minutes using up all of my "energy," and put my phone down again when the game asked me to pay up. 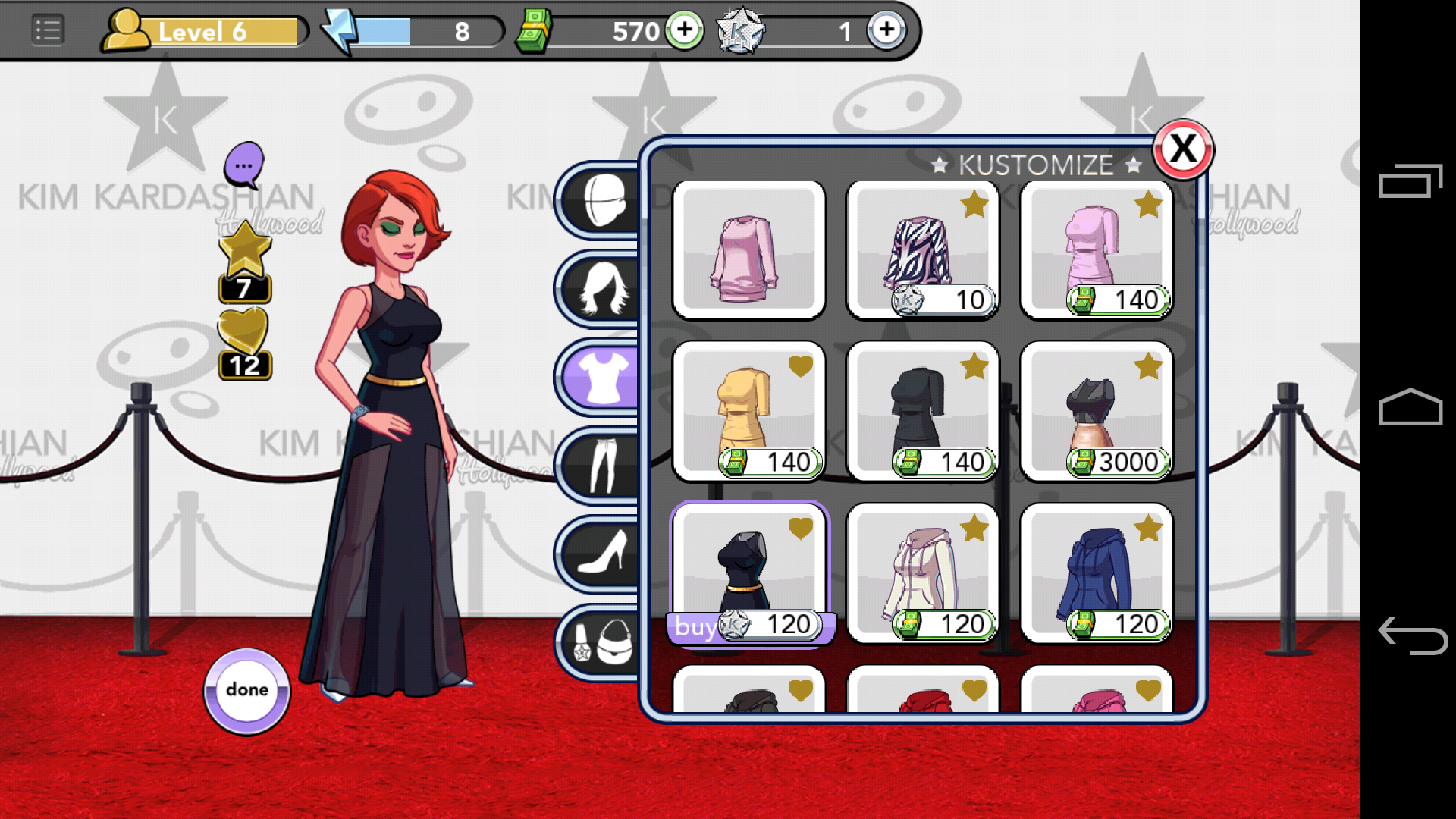 To give you an idea how utterly disgusting the game's costs are, consider the black dress shown above. It costs 120 K coins, which is a lot of K coins. It'd take you forever to earn them without paying, but if you want to pay at the best possible bulk rate, you can get 1,250 K coins for $99.99. That's right: this digital black dress, which will have a trivial impact on the game except as a visual novelty for you, costs about $10 real-world dollars. You could buy a real dress at H&M for that. Hell, the entire Monument Valley game only costs $1.99 and it's a work of art.

The kind of in-game purchases that Kim Kardashian: Hollywood asks you to make are so outrageously sickening they ought to be criminal. The game, like every play-to-win game, preys on players who want to do what everyone wants to do in a game: to just play it.

Of course, it's hard to argue with $200 million a year. People are paying up. The game is labeled 4.5/5 stars on Google Play with over 200,000 ratings, though people seem to be just as conflicted as I am. "It takes too long to get energy, you should make it three minutes or less, money isn't all!" Areli Guillen writes in a Google Play review. "And K stars are freaking difficult to get!" Guillen still gives the game 4/5 stars. "I am a big fan of the K clan... so win for me... but please what with the energy I run out of it ohh so soon..." reviewer Symaiya Shaikh writes, giving the game 5 stars.

So I'm quitting Kim Kardashian: Hollywood cold turkey, before I even become a D-list celebrity. Before I become a star model. Before I buy that Benz and cruise around Hollywood with my bestie, Kim K. Before I get that condo in Paris. Because for all the encouragement and praise Kim gives me, she doesn't really care about me, only what's in my wallet. That's not a game, that's reality — and I'm already paying for it.