The summer's most stylish game is made of infographics

The summer's most stylish game is made of infographics

Video game levels are dangerous: Mario has to deal with lava-spewing pits, while Solid Snake slips through heavily guarded enemy buildings in Metal Gear Solid. Metrico for the PS Vita, on the other hand, puts you in a world made of something much more mundane: infographics. The game asks you to navigate puzzles made of bar graphs and pie charts. It's not the most obvious inspiration for a game, but it works. "It is all about communication in composition," Geert Nellen, one-third of Dutch game studio Digital Dreams, says of infographic design, "which makes it perfect for games." And despite its seemingly strange concept, Metrico is an impossibly stylish and uniquely challenging experience.

Metrico looks and controls like a traditional platform game. You control a tiny silhouette of a man running and jumping through a world made of moving platforms, spiky enemies, and copious respawn points. At first you can only jump, but eventually you'll learn new abilities that let you fire energy blasts from your hands and tilt the world by moving your Vita around. But while the game has the mechanics of a platformer, it's structured more like a puzzle game. Each level is made up of a series of short challenges, and figuring out how to get through them requires clever thinking as opposed to quick reflexes (though in some instances you'll need both).

It requires a different kind of thinking

The trick is that the world of Metrico reacts to your movement. In one area running to the left might cause a platform to slide towards you, while jumping repeatedly could lower a previously insurmountable barrier. The rules are different for each puzzle, and the reactions are often linked: jumping might lower that barrier, but jumping too much could drop it so low that you can't get up to an even higher peak. How do you get there in just the right number of jumps? Metrico forces you to look closely at your every action so that you can understand how the world responds. This can make it an especially challenging game: I'm not used to having to count my jumps or kill enemies in a specific order, so a few of the puzzle solutions weren't immediately obvious. They require a different kind of thinking, and there's a handy quick reset button that lets you rapidly try new tactics.

Metrico also represents a very minimalist approach to traditional game design, one that makes the world more abstract in order to reveal its inner workings. "When you strip down games to their bare essentials, it's just about numbers," explains Nellen. "You have to kill a boss in Zelda by shooting it three times in the eye, which is in position XYZ. You have to eat all 240 dots in Pac-man and in Prince of Persia you can't make the jump which is 40 pixels wide. If you leave out the visuals, that's really all there will be left." 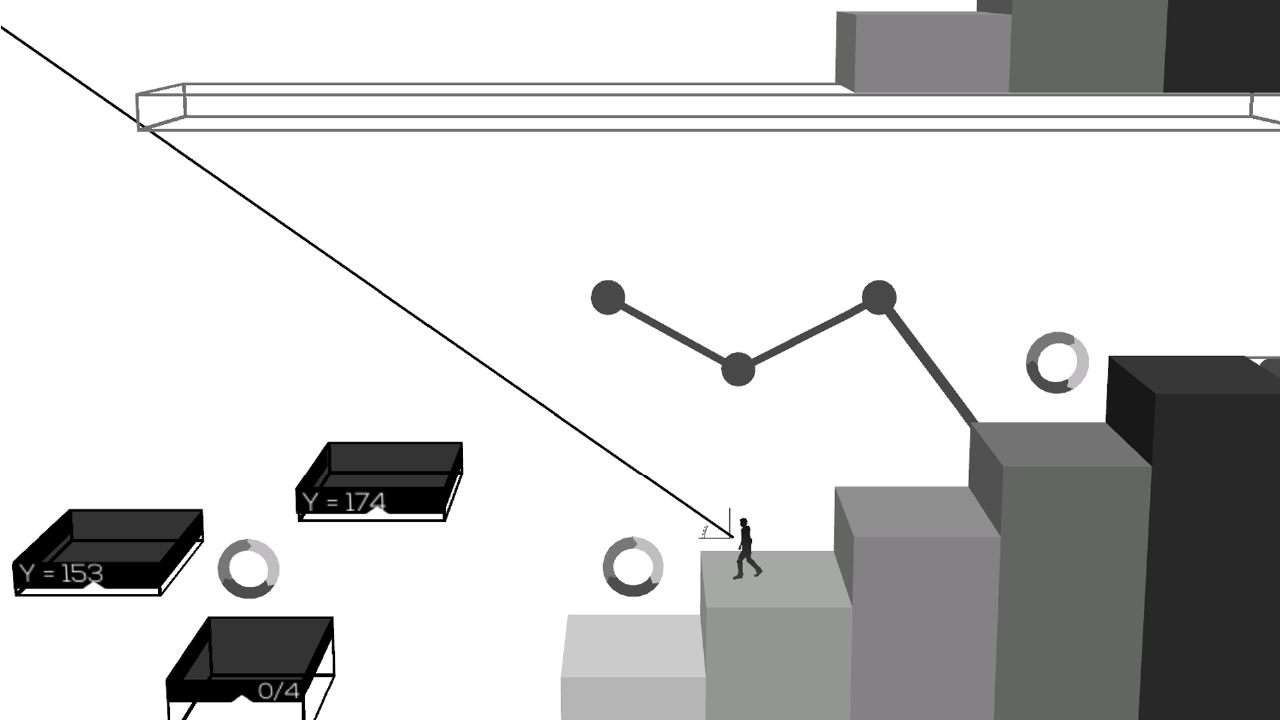 Of course, using stylish infographics also makes for a beautiful game. Metrico's levels are full of clean lines and strong colors, and every visual aspect of the game feels well thought out, from the simple but clear icons to the Harry Beck-style subway map where you select levels. "The beauty of infographics are definitely a big inspiration," says Nellen. It's all very slick and pretty, though it does come at a cost: every so often the game would stutter as I played, and the load times in between levels are disappointingly long.

The combination of minimalist presentation and challenging, bite-sized puzzles makes Metrico a great fit for your Vita: it looks fantastic on the handheld's bright screen, and the levels are engrossing enough to make long bus rides disappear. And the concept holds up surprisingly well over the course of the game. The team at Digital Dreams even had to cut plenty of features and ideas in order to maintain the game's minimalist feel. "You can use all the crazy and obscure statistics you can think of from games and make a puzzle concept out of it," says Nellen. Instead of feeling like a gimmick, Metrico constantly throws smart new ideas at you. You'll see lots of pie charts but you're rarely doing the same thing twice.