This tiny projector puts smartphone apps on your car's windshield

This tiny projector puts smartphone apps on your car's windshield

Short of the jetpack, there are few better visions of the future than a car's heads-up display. Instead of dials on a dashboard, information simply appears — almost out of thin air — right in front of you, and with a pleasing glow, making your trip to the grocery store look like a journey into space.

Once reserved for military jets, automakers have been toying with HUDs for years. They were often a luxury feature, but you can now find them in certain trims of economy cars where they're being used to mimic parts of the dashboard —things like your speedometer and fuel level. That's gone hand in hand with efforts to put phone apps on a touchscreen in the center console, and to make apps usable through voice controls. But what if you already have a car, and want an HUD? Or maybe you don't want to swap out your stereo with an aftermarket touchscreen?

Eyes and ears for your phone in the car

A San Francisco-based company called Navdy is trying to offer a solution for just that scenario, one it believes many people with older cars now face. For $499, it's come up with a flat projector you can mount to the top of your dashboard with a heads-up display that shows you key information like navigation and caller ID. It combines that with an infrared camera and microphone that watches and listens for hand gestures and voice commands so you can control your phone without taking it out of your pocket. Think of it like eyes and ears for your phone, and one that you can use with multiple cars.

Navdy's big sell is to let you see certain apps and notifications in a single or split view, something you might not get on your smartphone. If you're driving with directions turned on and get a call, Navdy splits those things up on its screen. You don't miss out on where the next turn is supposed to be, and avoid having voice commands interjecting into your call from your navigation app. The same goes for texts and emails: if you get either, they'll pop up on the right while directions continue to run; and if you want them read out loud, you just speak a voice command or use a gesture. 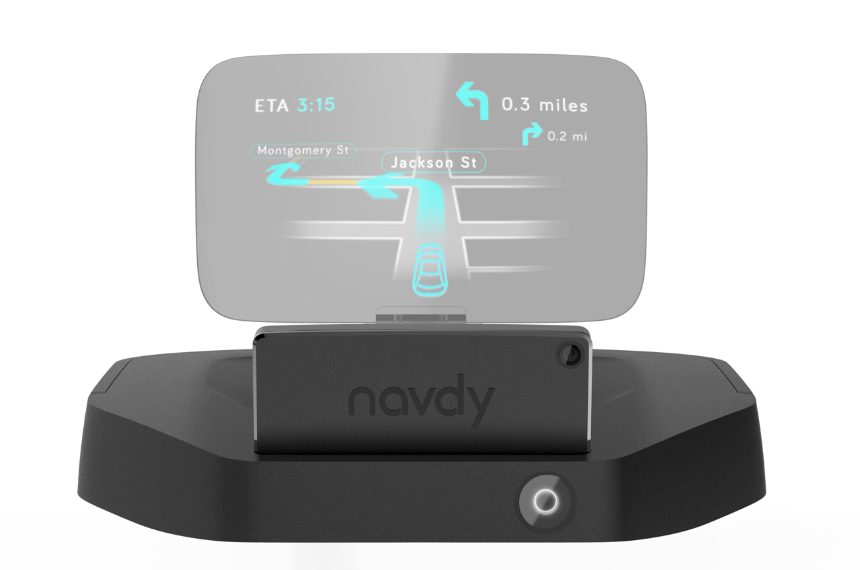 Three main gestures control voice calls, text messages, and voice search. If you get a phone call, you can flash the unit a thumbs up and it will connect. Texts work a little differently, with drivers sliding their finger sideways, almost like they're unlocking their phone in the air; the same sliding gesture (but in reverse) works to start a search from your phone. All these things are being picked up by a wide-angled infrared camera that's mounted on the front of the unit.

Navdy chief executive Doug Simpson and his team began work on the project nearly two years ago after finding difficulty using smartphones in cars — either hooked up to integrated systems, or attached to the dashboard with a mount. These solutions still required users to fiddle with something and take their eyes off the road, he argues.

"We're kind of fundamentally trying to reinvent the user interface of using apps," Simpson says. "The heads-up display is a key to that ... the road and window are in your field of view, and with in-LCD-based technology it's magical to see it outside of your windshield."

The Navdy is basically a small computer running Android

The Navdy is basically a small computer running Android with a built-in, heat-resistant battery so you can theoretically leave the unit cooking on your dashboard. The hardware draws power from your car's electronic control unit, which every car made after 1996 has. You can also plug it into your your car's DC plug with a USB adapter. On the top is a small pico projector that bounces off a reflector and onto the transparent display screen. The projector and lens system are designed to focus about six feet out into the distance, where Simpson says people naturally look out the windshield while driving.

The concept is distinctly different from the solutions being pushed by major technology companies including Apple and Google, which have CarPlay and Android Auto respectively. Those also work with voice commands, but operate on your car's existing dashboard touchscreen with a focus on actually displaying apps. By comparison, Navdy's dashboard hardware runs the projector while Navdy apps for iOS and Android feed it navigation and notification data over Bluetooth. The system will also work without a smartphone to display some of basic car gauges like the speedometer when plugged into your car's electronic control unit, though that's not how the company imagines people using it.

Unfortunately, we couldn't put the product through its paces, or see it being used as it's intended. The unit the company is currently showing off to the press is still a preproduction prototype, and was not installed in a car. Simpson says a production version is finalized, and is considerably smaller, though the company's keeping it a guarded secret in fear of having its design ripped off by would-be competitors. We also viewed a video of the interface, but did not see live notifications or navigation being piped over from the apps, which are still in development. 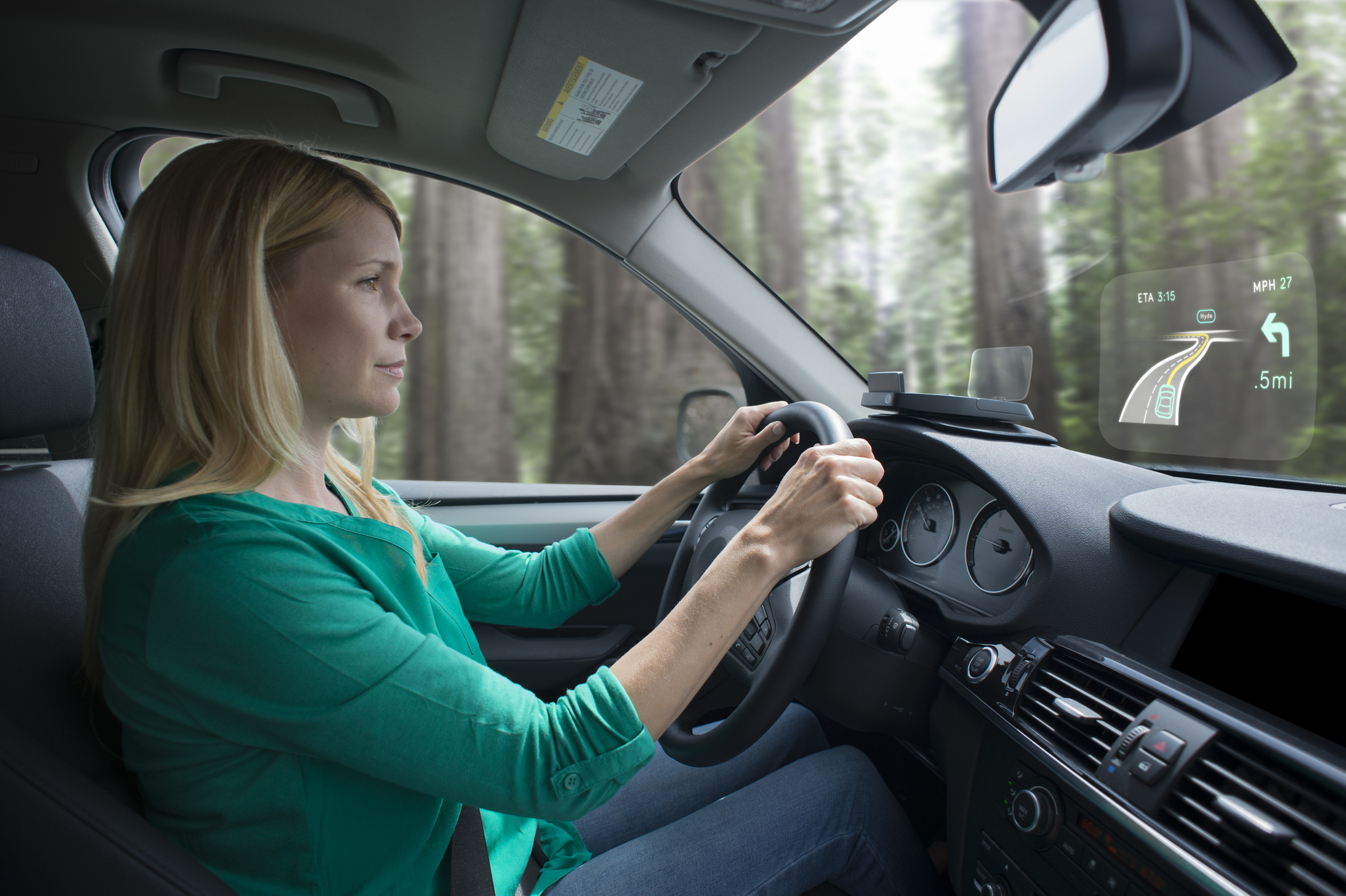 This first version of Navdy goes up for preorder today at $299, and will sell for $499 when it ships in early 2015. It comes with a mount that goes on the top of your dashboard, and uses magnets and conductive energy, so that you can take the unit off without having to replug the power or reposition it every time. Simpson says he expects people who live in the suburbs with private garages to simply leave it attached, but that it's been designed to quickly detach and fit inside most glove compartments when not in use.

The product will not be without potential pitfalls once it arrives, including staying within the confines of the law. Currently there are no laws prohibiting heads-up displays, just regulations that require that products do not obstruct a driver's view. A number of carmakers already include HUDs into their cars, something Navdy is taking as a cue to move ahead. That list includes Audi, BMW, Mazda, and General Motors, which use projectors that beam onto transparent plates, or the car's windshield.

"The laws that apply to us are about sticker and tinted windows."

"In our interpretation, it's a transparent image, and it doesn't obstruct your view," Simpson says. "The laws that apply to us are about stickers and tinted windows, not HUDs." Navdy hopes the National Highway Traffic Safety Administration will ultimately say HUDs are a good thing since they let people view data without looking away from what's in front of them.

Navdy is not the first company to pitch the idea of an aftermarket HUD that taps into smartphone apps, but may be the first to ship its product. A company called Next (not to be confused with the one Apple bought from Steve Jobs in 1996) is working on HeadsUp, which mirrors Android devices to the center of the windshield using a transparent OLED, and allows voice and gestures to control the phones. The company failed to get enough funding from Indiegogo, but is still offering it as a $399 preorder.

Navdy also joins a handful of other aftermarket HUD products, including one from Garmin that links up with a smartphone or a Garmin GPS unit to display navigation information using a vacuum fluorescent display. However that product requires adhering a sheet of reflective film to your car's windshield. There's also Pioneer's augmented reality HUD visor, the Cyber Navi, which puts the screen below your the driver's shade, though that product has been aimed mainly at Japanese drivers.

The product is not finished yet

There's still much work to be done before Navdy's solution, which promises to be much simpler than all these things, is ready to go. That includes the fact that it will only support English from the get to, despite the fact that the company plans to sell it internationally. There's also the matter of the software for phones and on the Navdy itself. When the product launches, it will work with Google's Maps mobile app, but early adopters will only see things like an estimated time of arrival and when their next turn is, not the rich visual road view you'd get on Google's app. Simpson says that will change, and that the hope is to have navigation apps run right on the Navdy hardware, pulling less data and power from phones, as well as making better use of the display. In the meantime, Simpson and company are promising a stream of software updates to early users that will make the product better.

"We think this is the first time head up display technology has been combined with touchless gesture recognition, and also a real head up display that works in cars offered on the market, Simpson says. "There's kind of a lot of things that we've had to pull together, and the combination of those things really creates a magic experience that's far better than the individual pieces."