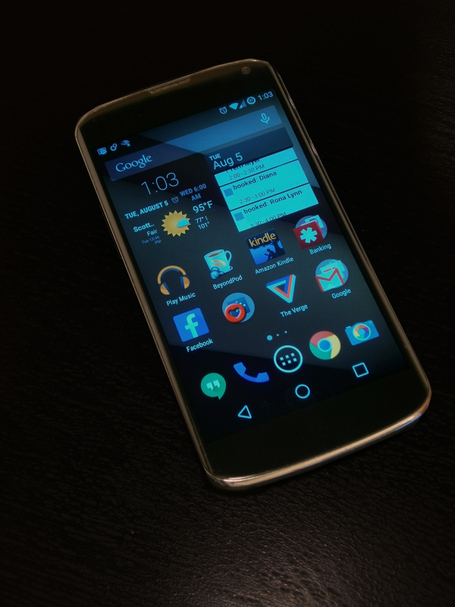 I've never been interested in rooting my Android phones. I'm not a tinkerer, I'm not interested in customizing my experience - I just want a phone that does what I need it to do. That said, I hate Apple's closed approach to both hardware and software.

My first smart phone was the original Galaxy S. At the time it was a viable alternative to the iPhone, and it served me well. Over time I realized that TouchWiz was not for me, and so when Google started selling the unlocked Galaxy Nexus, I immediately bought it. I loved the stock experience.

My next phone was the Nexus 4, which I have happily been using for almost two years now. Happily, that is, until the 4.4.2 update. After the update I started to experience bugs, including app crashes, keypboard freezes, camera malfunction and general stutters and lag.

With each new update I hoped the issues would be resolved, but instead they seemed to get worse. I tried a factory reset, but the issues persisted.

I've wanted to upgrade to a Nexus 5, but I was trying to hold out until the two year mark with my 4. Now I started to question whether another Nexus was going to be the right choice as a long-term investment. If the 4 was having so many problems, how long would it take before the 5 started to experience similar issues?

Then I remembered reading about how easy it is to flash Cyanogenmod, and decided I had nothing to lose by trying. The process couldn't have been simpler with everything Cyanogen has done to simplify the rooting and flashing procedures. I had the new ROM running in under thirty minutes, but more importantly it was running completely stable. All of the bugs were gone.

At first I thought it was because Cyanogen was running off a 4.4.3 build, but I received the 4.4.4 update within a few days, and still, no problems. The device not only works without bugs, it seems to be running more smoothly than it did on stock even when it was stable.

I also very quickly came to realize that all of the customization available to a rooted device may not be necessary, but they are pretty damn cool.

So, my questions to the community are:

Anyone else run into problems with their N4 after the KitKat updates?

Does Google become less rigorous about their Nexus updates for older devices?

Should I buy the N5, or should my next phone be the OnePlus One running Cyanogenmod out of the box?