The next big thing in transportation is carpooling

The next big thing in transportation is carpooling

Lyft launches a new way to share your ride with strangers, and Uber follows

Carpooling, that time-honored technique for making sure the kids get to soccer practice, is making a comeback in Silicon Valley. Lyft, the fast-growing ridesharing startup, is introducing a new service today to match you with one or more passengers heading in the same direction. The main benefit: a fare that the company says is up to 60 percent less than normal.

Lyft Line will show you your fare up front, and let you pay the smaller amount even if the company fails to match you with another person. The company says it’s part of an effort to make on-demand rides a viable alternative to car ownership and public transportation. In developing Line, the company noted that 90 percent of Lyft trips see someone taking the same trip within five minutes. "What we can do with that is build a whole new type of public transit," co-founder Logan Green told reporters this week.

Lyft is currently locked in a no-holds barred battle with Uber, who originated the model of on-demand transportation that the companies now share. In a hilarious twist, Uber — which had clearly gotten wind of Lyft's carpooling plans — rushed out a blog post last night saying that they, too, would be launching a carpooling model later this month. It's a "bold social experiment," Uber says, though you can try Lyft's experiment starting today. (Hitch, which launched as a carpool-only twist on Uber, is also available in San Francisco.)

Ridesharing isn’t new, of course. There are a variety of websites devoted to helping people find rides; there’s the popular practice of "slugging," in which car owners pick up extra passengers in exchange for the ability to use the carpool lane or for a reduced toll. But those services aren’t as easy to use as an on-demand service, and Lyft says it has the density to make ridesharing feasible on a grand scale.

Lyft Line marks the company returning to its roots, co-founder John Zimmer said. Lyft spun out of an earlier company, Zimride, which matched people for long-haul rides. Zimride was popular mostly with college students needing to return home at the end of the semester, and as such was something people used a few times a year at most. The company was acquired by Enterprise last year. 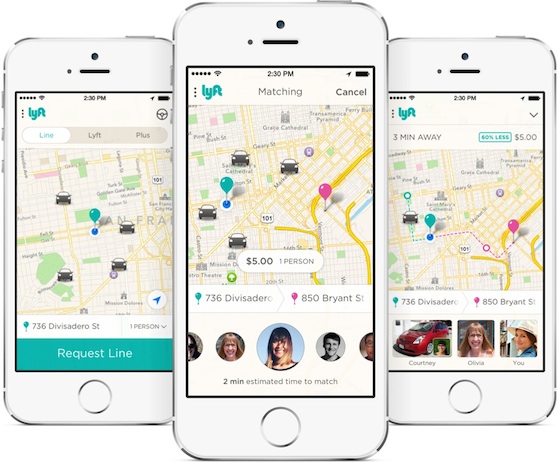 Lyft Line was made possible by the acquisition in April of Rover, a small transit startup led by David Dryjanksi and Lev Popov. Rover used real-time transit data and hacked a private Lyft API to match people who were considering transit with Lyfts. It’s available today in San Francisco, and will come to other Lyft cities later. The first ride is free up to $25.

With Lyft line, Zimmer says, the opportunity is much larger. The company believes that if it can get you to work for $5 or less, it’s the kind of thing you’ll do all the time, even replacing transit. At $10 a day, though, a Lyft commute would be two or three times as expensive as transit in most cities. But it could well be cheaper than owning a car, depending on the cost of insurance, gas, parking, and whether or not you have a car payment.