Pinterest's take on direct messages blows Twitter's out of the water

Pinterest's take on direct messages blows Twitter's out of the water

If there’s one thing the App Store is saturated with, it’s messengers: WhatsApp, of course, but also Facebook’s, and Snapchat, and Hangouts, and Line, and Kik, and all the rest. So why would Pinterest, a social network for exploring your interests, spend time building a messenger? The answer says a lot about where Pinterest is going — and the product itself is one of the best things we’ve seen from Pinterest to date.

In part, Pinterest messages simply closed the loop that the company started when they introduced the ability to send pins to your friends on the network last year. Today, Pinterest users send 2 million pins a day on the service. But to date there has been no native way of responding to the pins, short of sending your friend or co-worker an email. That’s where Pinterest messages come in. "We see it as heavier weight than a Facebook Messenger," says Tom Watson, the product’s designer. "It’s more of a conversation around an object than just a quick hello."

"It's more of a conversation around an object than just a quick hello."

But the move also demonstrates how Pinterest, which began life as a purely public scrapbook, has gradually come to embrace private sharing. The addition of "secret" boards in 2012 was the first step, and the ability to send a pin privately was the next. With messaging, Pinterest is becoming a more robust collaboration tool — a step closer to its mission getting people not just to pin things but to do things. (And to buy things, eventually.)

Starting today, the company is rolling out messages on Android, iOS, and the web. Like Facebook’s "chat heads," recent messages pop up to the left of the feed as bubbles with your friends’ faces. You’ll find the others under the pin icon where notifications pop up. Just click the ‘+’ icon, type in the name of a friend on Pinterest, and you can send a pin or a standalone message. The impressive thing about Pinterest messages is that the pins you send within the app retain all the functionality of a pin you see anywhere else on the site. Anything you can do with a pin on Pinterest’s web site, you can do inside a message: pin it to a board of your own, send it to another friend, or click the ‘heart’ to add it to your list of favorites. You can even drag a pin from the site into a message.

That might not sound like much, but it blows most other internal messaging products out of the water. Unless you’re among the relatively few number of verified users, Twitter’s years-old direct-message feature still won’t let you send most URLs, even though sharing links is a core use of the platform. It was big news last December when Twitter DMs finally added the ability to send photos. Meanwhile on Facebook, shared links can be opened and not much else. 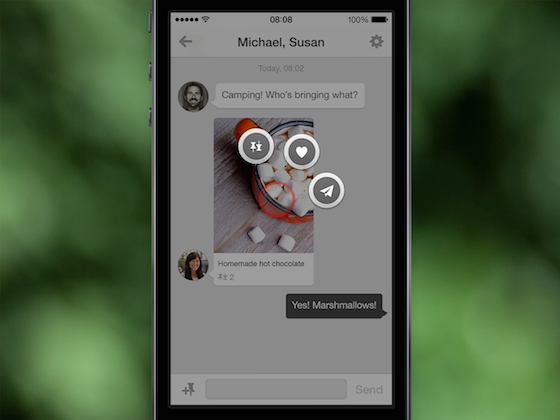 Pinterest goes an additional step further by letting you send entire boards or user profiles to your friends using the message feature. It also includes group chat for up to 10 people — helpful if you’d like to plan a trip or event with your friends. And for the many brands on Pinterest, the ability to suggest and comment on pins privately before sharing them to their followers will be a welcome addition.

Given how robust the messenger is on day one, it’s surprising to learn that Pinterest built the entire product in three months. Watson and some colleagues built a prototype at a hack week in Portland, Oregon, where Watson lives. Executives liked it, and the product was fast-tracked.

"It's not meant to take over the entire Pinterest experience."

For now, Pinterest has no plans to separate messages into their own app. "It’s not meant to take over the entire Pinterest experience," Watson says. "It’s a way to enhance and close the loop on the (send-a-pin) feature." But if there’s one thing we’ve learned from messaging apps, particularly in Asia, it’s that messaging can be a launching pad for all sorts of commercial products. It’s also a great way of attracting new users — a non-user who receives a message from a friend will receive a link to check it out on Pinterest.

But even if you don’t particularly care about Pinterest, its messenger is worth checking out. It’s a lesson in how a company can build communication into their app in a way that emphasizes utility instead of novelty. And it’s a challenge to companies like Facebook and Twitter to make their own messengers as useful as this three-month old experiment.