A few weeks before the 2014 season starts, the NFL has launched a new video network called NFL Now. First announced in January, it's made to bring the huge troves of football video into one place: highlights, interviews, Hard Knocks, and the decades of NFL Films content. It's like the NFL Network, only available everywhere, to everyone, for free.

When you first open the app on Android, iOS, Windows, Firefox, Roku, Xbox, Apple TV (not officially, but so we hear), or basically anywhere else you can think of, you sign in with a username and password. Then you pick your favorite team(s) and your favorite players. From there, you're dropped into an unending stream of personalized video. Much of it is free, or for $1.99 a month you get access to NFL Now Plus, which offers more game-day highlights, more archive footage, and a totally ad-free experience. 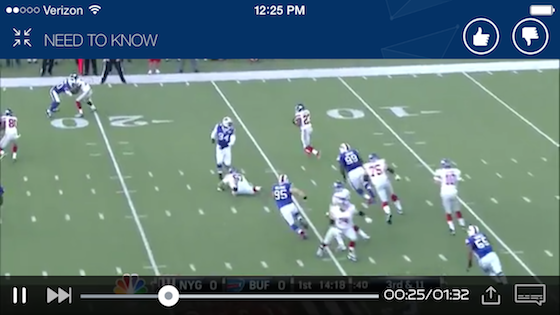 It remembers who you are and what you're watching

The first thing I saw in NFL Now was a handsome, suited man named Mark Istook. He very patiently explained the basic premise of NFL Now from behind a studio desk, before spending a minute and 32 seconds talking about the pre-season game between the Bills and Giants along with some news around the league. From there I moved seamlessly into a video about whether or not the Eagles will be any good this year (I hope not), then more highlights from the Bills game (go Giants), an ad, and a fantasy report on Rashad Jennings. As a Giants fan, I got a lot of Giants video, a lot of NFC East video, and a lot of fantasy advice.

The app starts with its basic cues, and gets more and more personalized as you watch. You can like or dislike a video, but the app also pays attention to what you watch to the end, what you skip, what types of shows you watch, and more. And it knows where you leave off, so whenever you pick up another device you'll be dropped right back into your stream.

NFL Now is largely composed of already-existing content, just helpfully pulled off of team websites and Verizon-exclusive apps and presented in a single, attractive place. From a studio in LA, the NFL's also producing a bit of original video, starting with a constantly-updated minute-long news show that will catch you up on league news whenever you open the app. Mark Istook will be there for you all day.

No, there are no live games. The NFL's ridiculously lucrative deals — including a huge new digital deal with Microsoft — don't allow it. But they'll expire eventually, and this is clearly the place the NFL will someday stream its games. (If you're outside the US, the league's Game Pass package already allows you to do so.) Whenever access does become widespread NFL Now is going to become a must-have for every football fan in America. Even now, it's an awesome way to catch up on your team (the Giants, duh), watch a few highlights, and stay busy during the baseball doldrums until the season starts. There's a lot of Hard Knocks waiting for me. 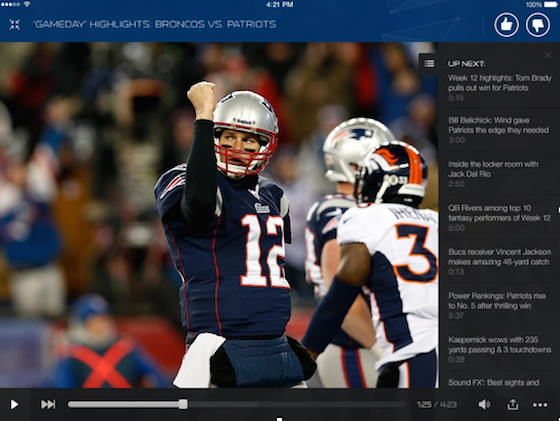