I drove the anti-Tesla for a week

Share All sharing options for: I drove the anti-Tesla for a week

Weaning America off its gasoline addiction is hard. If it wasn’t, we’d have done it already. It certainly doesn’t help that great electric cars are tough to make, which means the best ones are expensive. What’s more, charging infrastructure is still in its infancy — you can’t drive anywhere you want with complete certainty that you’ll be able to put electrons back in the tank. Even when you can, recharging is a lot slower than pumping a few gallons of fossil fuel and going on your way.

Tesla believes in simply ripping the Band-Aid off — all of its models are pure electric, growing pains of immature technology and infrastructure be damned. GM, the very seat of the automotive establishment, is moving with every ounce of caution that Tesla has shrugged off.

With the launch of the Chevy Volt in 2010, GM hedged its bets with what it calls the “extended-range electric” drivetrain, offering a limited range of pure electric operation supplemented by gasoline that offers unlimited travel as long as you can keep finding gas stations. For what you get, the Volt is reasonably expensive: it starts at over $34,000 for a car with less passenger space than the $17,520 Cruze.

Now, imagine stuffing basically the same drivetrain into a Cadillac. That’s the ELR. And it’s $75,000. That’s the cost of a Tesla Model S. Filled with 9 gallons of 91 octane, it’s the anti-Tesla.

Actually, the ELR provided to me by GM clocked in just north of $82,000 for a car that is ostensibly a tarted-up Volt. That’s some $12,000 more than a base Model S, which offers 208 miles of all-electric range compared to the ELR’s 37. It’s also over $40,000 more than the outgoing (but similar-looking) CTS coupe equipped with a traditional gasoline engine.

Has GM lost its mind? I had a week and a 900-mile road trip from GM’s hometown of Detroit to Oshkosh, Wisconsin and back to find out. 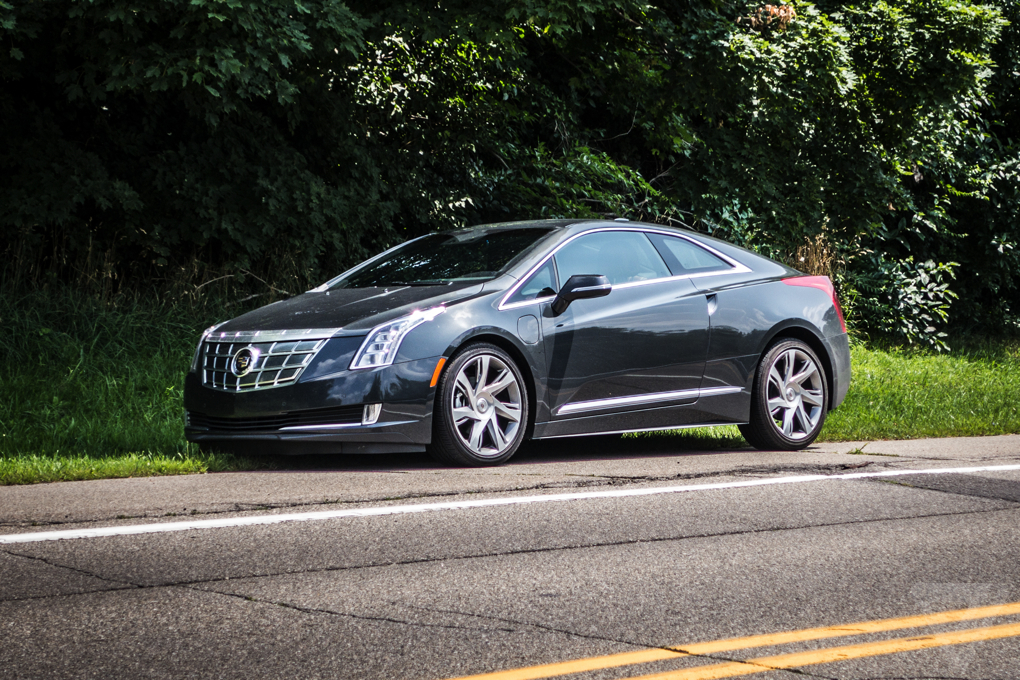 It’s a sleek car. "It looks fast standing still" is a cliché in automotive circles, but it applies particularly to the ELR, which looks like a wedge designed to obliterate headwind at all costs. It’s one of the rare cases where the concept car — 2009’s Converj — is almost indistinguishable from the production model, a far cry from the Volt’s sad translation from concept to family-hauler reality.

A wedge designed to obliterate wind at all costs

The futurism continues on the interior, which generally looks great. It helps that GM delivered me a dark silver car over a rich, dark brown leather interior, which is a killer combination with just the right amount of contrast. Suede-like Alcantara blends with carbon fiber and wood along all the surfaces, mated to Cadillac’s glossy Cue system in the center stack. The instrument cluster is just one big LCD display — a popular trend among automakers lately — broken up by a faux gauge bezel to visually differentiate data points. The driver can select from a small handful of "skins" for the cluster, all of which put a focus on communicating energy consumption in one way or another.

I won’t dwell on Cue because it’s essentially the same as the system that Cadillac has been using for the past couple years, but it needs a lot of work. It’s slow — I’d even argue that it’s dangerously slow. Operations that should be instantaneous (switching between radio and navigation controls, for instance) often took multiple seconds, distracting me and taking my eyes off the road for far longer than would be considered reasonable. Animations on the moving map — changing zoom level, showing upcoming turns, so on — never exceeded 6 or 8 fps, visibly stuttering the entire time. The processors used in cars aren’t bound to the same power-sipping requirements that phones are, yet Google Maps on my Nexus 5 consistently ran circles around Cue. It doesn’t make sense. GM needs to throw considerably more processing power at this system, but ultimately, it might simply come down to technologies like CarPlay and Android Auto taking over and putting these proprietary systems to shame.

Fortunately, driving this car is a lot less frustrating than interacting with it. Mashing the accelerator doesn’t glue you to the back of your seat the way a proper sports car might, but it’s not a slouch, either. Then again, most cars with electric drivetrains really benefit from the even torque distribution afforded by their motors: they feel like they’re pulling you forward with gusto no matter your speed or situation. Engine RPM — which starts to lose meaning in hybrid and electric drivetrains — simply becomes a non-issue. The transition between electric and gasoline modes is seamless and so quiet that I barely ever noticed the engine was even running.

You could buy three Priuses instead

But the ELR, no matter how fast it looks, was never about speed or performance anyway: it’s about feeling reasonably good about your stewardship of the planet’s finite resources while looking good (and kind of rich) doing so. To that end, the bulk of the car’s eco-friendliness ends after around 40 miles, at which point the electric power takes a back seat and the car acts more like a conventional hybrid — it can lean heavily on the battery in short bursts, but the engine is usually turned on. It’s really no different from a Prius at that point. That’s not a bad place to be as fuel economy goes; I consistently got close to 40 mpg on my journey. But for the price of this little coupe with room for a couple small humans in back and a couple moderately sized bags in the trunk, you could buy three Priuses. Three.

Of course, you can save some money by running on electric. Charging is easy enough, it works just like any other electric car — when you can find a charger. I was driving through rural parts of the Midwest where proper level 2 chargers are ghosts. Like the Volt, the ELR comes with a portable charger that works with standard 120-volt outlets, winds around itself for storage, and looks a little bit like an industrial power extension cord, but I ran into a number of outlets that it didn’t like. To make sure charging goes smoothly (read: no fires), the portable charger is designed to be finicky, glowing an ominous red LED to let you know you’re out of luck. Even if you can get it working, though, it can take 18 hours to top off the batteries. 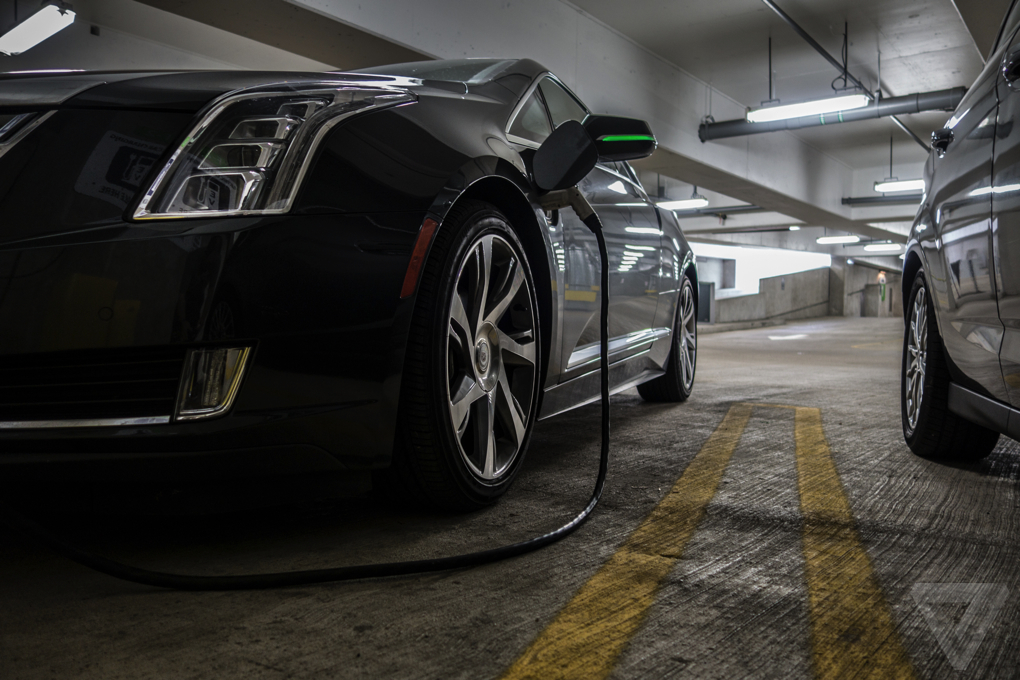 With level 2 charging, a full charge comes in about four hours, which makes the ELR a great city car: urban areas are more likely to have chargers handy, and 37 miles is enough range to scoot around without sipping any gas. But the reality is that the ELR is designed like a grand tourer — a comfortable coupe with a cabin so quiet you can hear a pin drop. You don’t want to drive a few blocks, you want to drive it across the country. There’s something to be said for the unlimited range of a gasoline engine, but you can’t shake the feeling that you’re cheating, or that the electric mode is somehow make-believe. Certainly on my 900-mile trip, I spent the overwhelming majority of the time running on old-school internal combustion.

Once you get over the realization that this isn’t much of an electric car, the question becomes: what’s the exact price that you ascribe to the raw fabulousness that the ELR affords? Because truly, this car is fabulous. No one is arguing that. I got wide-eyed looks everywhere I drove, and I never got tired of looking at it myself. It simply doesn’t look like anything else on the road. It’s stylish, it’s comfortable, it’s commanding. There are precious few production vehicles that look as though they were imported directly from the future; this is one of them.

But when you frame the ELR for what it really is — a compact hybrid coupe — Cadillac just doesn’t have the brand cachet for this sticker price. I loved it, and I would drive a free one to the ends of the earth and back. I might even pay close to $50,000 for the pleasure, but certainly not $82,000.