Share All sharing options for: I got sweaty for this fitness gadget and all it did was judge me

Abe Carter is casually talking to me about his company's plans to collect and organize my biometric data as I start running out of breath. I've only been on the treadmill next to him for a few minutes, but it's my first time being back in a gym in years, and my lungs are making that abundantly clear. If this were The Walking Dead, I'd be an easy zombie snack.

We slow things down and catch a breath before it's time to move onto the main event: seeing if the wristband and shoe sensor I'm wearing can figure out the workout I'm about to throw at it. But if I can be honest, I'm wondering the same thing about my body.

Carter is the co-founder of Amiigo, the latest startup to hawk a fitness band, which — like many others — is promising to track your entire life. Unlike the others though, it claims to be the first to actually figure out what exercise or activity you're doing, without actually having to tell it. That means I could throw the band on and go work out on 30 different gym machines, then get a complete breakdown of my performance on each one. Did that actually happen in my case? Very nearly, but there was some sweat involved before we could even start the experiment.

Before Carter and I set off on our circuit (which I got to pick from any machines or areas of the gym), we had to teach the untrained wristband and shoe clip each exercise we were going to do. You only do this once, and it already knows activities like walking, running, cycling, and elliptical machines. Each "training" involves doing eight or more repetitions of an exercise while a 30-second countdown timer counts down.

Teach it the workout once and it knows forever

Once it's got it, the system can pick those out the next time you do the exercise, with no training required. In practice, that means you can pick up dumbbells and start doing reps, and it could tell whether you were doing regular curls or hammer curls, just by the twist in your arm.

The hardware is a top-heavy, a rubberized bracelet loaded with sensors that snaps on with a row of interlocking plugs, kind of like an old kid's watch. On the bottom side of the watch is a pulse oximeter and a temperature sensor that can monitor what's going on with your body by taking readings off the skin. Inside is an accelerometer, Bluetooth antenna, and a battery that's rated for three days of use. All of this is wrapped in dull, waterproof polyurethane. When you're sweating a lot, this material doesn't breathe well, but it also means you can take it into the shower or put it under a sink to clean it off. The shoe clip is basically just a Bluetooth accelerometer with an external temperature sensor.

Both gadgets charge and sync wirelessly, so there are no plugs anywhere. Like other fitness bands, you pair it to your phone right from the app, which also shows your workout progress when you're done. A site launching later this fall will show people a broader range of data, but for now it's all about your phone.

Once it was time to begin the workout in earnest, the mobile app has to be set for a special "workout" mode. You can pick which trained exercises you want it to do from a list, something the company is hoping people will use as a workout helper. But it will also pick up any other exercises it recognizes and give them to you in a report when you're all done. 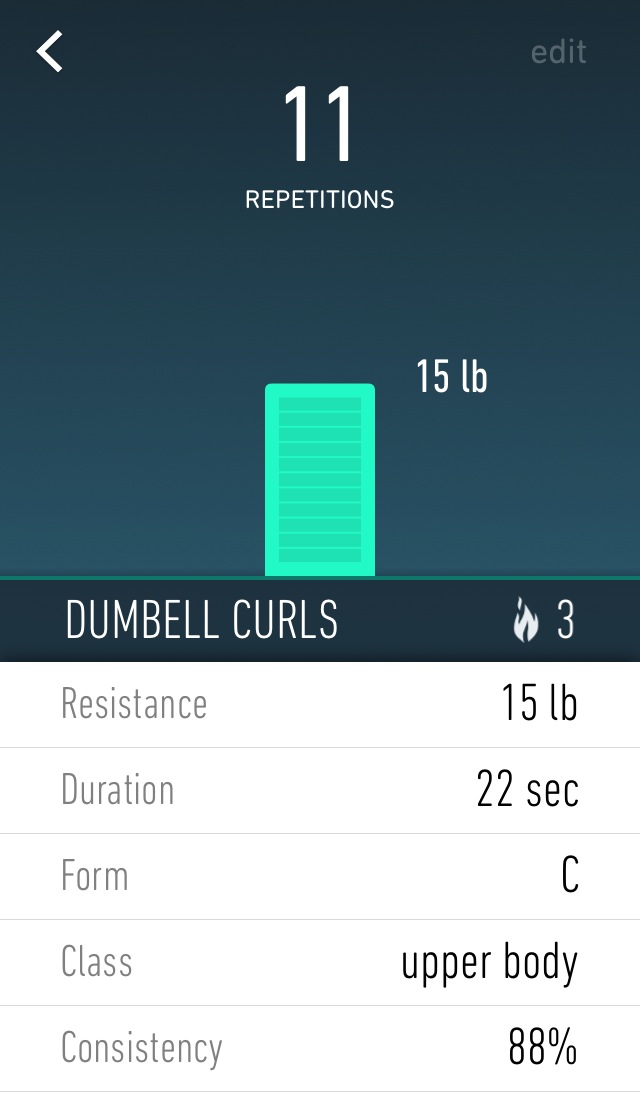 These reports are what make Amiigo interesting, and one of the things that Carter says has been challenging to keep from being too visually busy. The company is trying to filter out things that aren't actually a part of your workout, like steps people take between exercise to go to the bathroom or drink some water. It can do all this while trying to classify unknown activity in the event that you do an exercise the system has not learned.

In my case, we did a seven exercise circuit that clocked in at 19 minutes and burned a paltry 238 calories. All this was tracked in a timeline, with each exercise in the order that they occurred. It managed to get all but one of the exercises we trained, and correctly identified running and cycling — two activities that we didn't have to train. The trained one it missed was the crunches, while the untrained dips were recorded, but not recognized.

The app gives you some leeway to edit things, but not much. You can add how much weight you were lifting, but you can't adjust with how many reps you pulled off, or how well you were doing it. Carter says that the company doesn't want people who are competing with one another using the tool to be able to cheat if they miss a benchmark. With that said, there were a few exercises where the Amiigo missed a rep, which could have just been my limbs turning to jelly.

And that jelly moment is something Amiigo tracks too. Some exercises also get a form rating, so while my running was an A+, my chest presses earned a lowly C. This is calculated by measuring movements, so while I had a steady gait, I might have been a little shaky and rushed on my chest presses. This can be picked out in the raw data Carter says, adding that it tends to be a bit "spikier" when you're doing a bad job. The company eventually plans to let personal trainers tune how certain exercises are rated for form by letting them adjust how long and fast repetitions should be.

A raw chart of my dumbbell reps. Users see a much prettier version on the app.

The Amiigo is being designed to identify a number of activities, including swimming, which I did not test, but where its data recognition could be especially jaw-dropping. It can detect what kind of stroke you're doing just with the wristband, so if you're going from a butterfly to backstroke to breaststroke to freestyle in succession, it will automatically classify it as a medley — a common combination of swimming strokes used in competition. The company is also developing a polyurethane anklet for the foot sensor so that people can see how strong their kicks are.

When not working out, the Amiigo will function as your standard activity tracker, giving you an estimate of how many steps you've taken, how many calories you burned, and what your sleep has been like. The current sleep-monitoring system tracks how many hours you got, and combines that with your heart rate to note if you're having any issues (or dreams about murder clowns). A future version of that will define different qualities of your sleep. Things you miss out on versus some competing fitness trackers are a display to show data without any smartphone app, and vibration for feedback when hitting goals or to wake you up like the Jawbone Up and Fitbit Flex can do.

There's still more work to be done on the Amiigo before it goes on sale in January. The company's been shipping them to early backers from its Indiegogo fundraising since June, and plans to use that broader pool of testers to hone its software and activity recognition. Maybe I'll have joined a gym by then.