By automotive standards, the Chevy Volt is entering its twilight years — it only went on sale in 2010, but it's been rounding the global auto show circuit essentially unchanged since 2008. GM is working on a replacement, and a press release issued today announced that it will debut in January of next year at Detroit's North American International Auto Show, one of the United States' biggest automotive events alongside major shows in New York and Los Angeles. The company teased the launch with a picture of the trunklid (pictured above), looking considerably curvier than on the outgoing model. 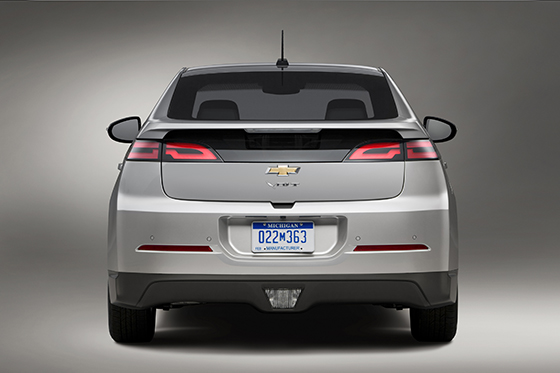 For comparison, the rear view of a current-generation Volt. (GM)

The Volt, of course, is no ordinary car: GM bet billions on its so-called Voltec platform as it emerged from bankruptcy several years ago, a hybrid gasoline-electric drivetrain capable of running on electric power alone. The Cadillac ELR and Opel's Ampera both use Voltec, but the Volt — a moderately priced model — is the mass-market flagship.

No details of the new model were announced, but increased electric range and improved styling are hopefully on the radar: the current Volt can travel just 38 miles on electric power alone, and its design lacks the deft touch of the much newer (and pricier) ELR.