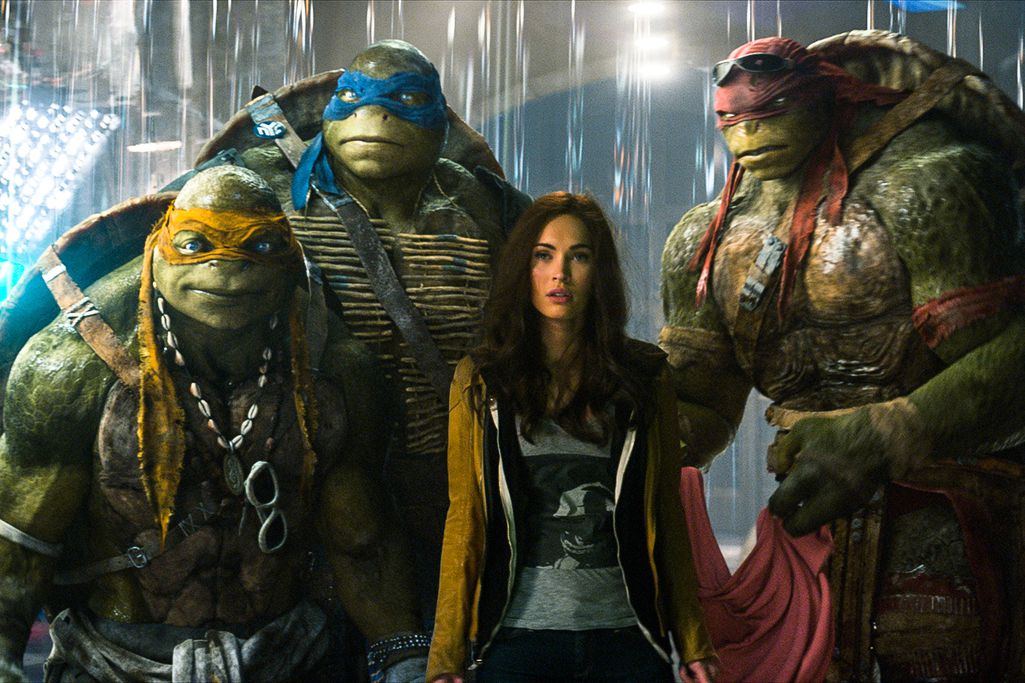 While researching this review, I came upon Roger Ebert's 2 1/2-star (out of 4) review of 1990's live-action Ninja Turtles. The entire piece is as applicable now as it was then:

"I did not walk into the screening with a light step and a heart that sang. For that matter, I did not walk out afterward with my spirits renewed. But this movie is nowhere near as bad as it might have been, and probably is the best possible Teenage Mutant Ninja Turtle movie.

It supplies, in other words, more or less what Turtle fans will expect: the Ninja Turtles, subways, pizzas, villains, a rudimentary plot and an explanation of how the Turtles met their Zen-master, a wise old rodent."

(That review, by the way, had a TMNT-themed Pizza Hut banner ad next to it — as did his 1-star review of TMNT II: The Secret of the Ooze, which is a very entertaining read.)

By chance or by choice, Teenage Mutant Ninja Turtles has always been a reflection of its time. The 1990s live-action trilogy was an amalgam of Jim Henson puppetry, bad perms, and Vanilla Ice. The most recent Nickelodeon cartoon series is a blend of colorful 3D animation with stylish 2D interstitials and characters with large, anime-inspired expressions.

The new Michael Bay-produced Teenage Mutant Ninja Turtles is also a time capsule, in a sense — a film you could watch decades from now and know, definitively, what action films were like in 2014: flashy, frenetic, and fraught with explosions. The movie is far from perfect (“generic” is perhaps the most appropriate term), but it’s exactly what a Turtles film has always been: silly fun.

Watch the most absurd moments in in TMNT history. Also available on YouTube

The TMNT lore has changed very little over the years. Four turtles come in contact with a man-made mutagen and grow up in the New York City sewer system obsessed with pizza (specifically for this film, it’s Pizza Hut — why hello there, rampant product placement) and pop culture. The turtles learn ninjutsu from their adoptive father Splinter, a mutated rat, and fight crime. The Bad Guy Organization du jour is the Foot Clan, led by a man known as The Shredder who really likes the idea of eating turtle soup. The comic was created by Kevin Eastman and Peter Laird 30 years ago, and intended to be a parody of comics at the time.

This movie hits all those points and more, while giving longstanding human companion April O'Neil a more important role in the turtles’ origin story. As O’Neil, Megan Fox gives a surprisingly decent performance given how over-the-top and expository most of her lines are. There are maybe a handful of other humans with speaking roles, all very one-dimensional: a snarky-and-lovelorn co-worker (Will Arnett), a take-no-bullshit boss (Whoopi Goldberg), and a duplicitous businessman working with the bad guys (William Fichtner).

The stars, of course, are the turtles themselves. There was a lot of outrage on the internet when the new, more human-like faces debuted. It’s certainly different but not jarringly so. Whereas the old quartet differed only by bandana color and choice of weapon, the new turtles have distinctive bodies and fashion choices that match their personality (Raphael the most muscular, Donatello the nerdiest) without being too exaggerated. Their voices, like the animation, work surprisingly well — the characters interact with the world in a natural way without any noticeable technical glitches. (The one exception being Tony Shalhoub as the voice of Splinter, which never quite matches the character model.)

But Teenage Mutant Ninja Turtles has never been about a complicated story — it’s always served to set up crazy fights. Pretty much all the tropes of today's action films are represented: heavy use of shaky camera during fights (e.g., Bourne), quick jump cuts that do away with the pesky gaps between punches, and a few exploding set pieces that probably weren’t flammable in the first place. The kicks punctuate, the environment is resoundingly smashed to bits, and in several scenes there’s a distinct and deliberate grinding metal sound that evokes the new Godzilla or a J.J. Abrams production. Michael Bay's influence here, by the way, is extremely apparent.

I remember the live-action TMNT films very fondly because I was six at the time the first one came out. Secret of the Ooze is probably one of the first films I saw in theaters, in fact. I had all the toys, played all the games, watched the cartoons. But I’m not going to pretend I was watching quality cinema. I can’t defend Vanilla Ice as a pivotal plot point (which he is), but I accept it for what it was and still remember it fondly. This version of Ninja Turtles — and the subsequent sequels that are being planned — fills the same role for a new generation.

There's a scene about halfway through the movie where all four turtles are in an elevator. (You can watch it for yourself in the video above.) Michelangelo starts making a beat with his nunchucks. And you might be expect the three brothers to be annoyed, but slowly but surely everyone joins in — happily so.

That's basically the entire movie in a half shell. Don't think, just enjoy.