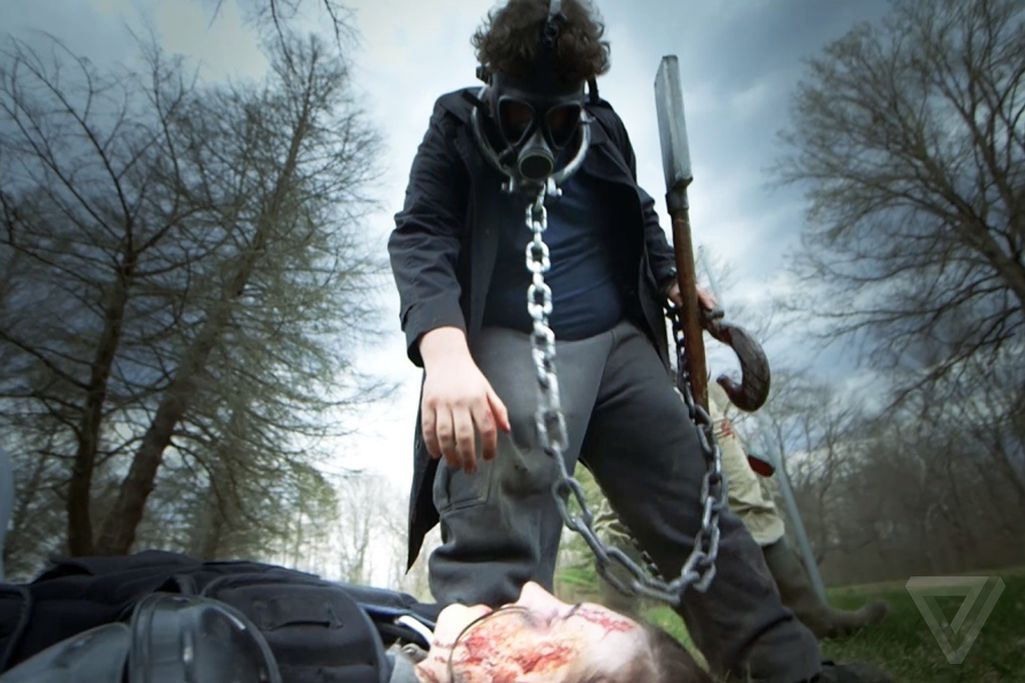 Across North America, at camp sites and — in one case — a former military airfield, people are living through the aftermath of the apocalypse. The living dead roam the woods, and society has devolved into warring ghouls, survivalists, psychics, and religious fanatics. If you can imagine something happening after the end of the world, there’s a decent chance it’s happened in live-action role-playing game Dystopia Rising, which celebrated its fifth anniversary earlier this year.

Currently running at 10 sites in the US and Canada, Dystopia Rising is a game that’s both immediately intuitive and very involved. It’s a monthly trip into a mashup of post-apocalyptic influences, attended by participants who are willing to spend a weekend entirely in character through sun, rain, snow, and occasionally copious amounts of fake blood. And this spring, for at least a little while, I was one of them.

For a science fiction larp set in the far future, Dystopia Rising is an extremely pragmatic game. Each event takes place in a post-collapse version of its actual location, and as often as possible, what you see is what you get. The New Jersey branch runs out of a campground that spans hundreds of acres, which they’ve converted into a brewing town called Hayven, complete with a central bar that serves as landmark, trading hub, and meeting place. Food containers, clothing, and equipment must be plausibly distressed, and while there’s no way to genuinely meet a zombie, co-founders Michael Pucci and Ashley Zdeb (along with other organizers) run an impressive costume and makeup operation to outfit non-player characters who populate the quests. As one long-time player told me while we explored the campground beforehand, it’s a lot easier to look at a run-down shack and see a run-down future shack than a medieval castle. Also, frankly, New Jersey is sort of apocalyptic anyways.

When I headed out to the campsite, I wasn’t planning on playing full-time. I originally intended to show up as an observer, putting on a costume and becoming a non-player character in a couple of side missions. But once I started talking to the organizers, they invited me to build a character and join in.

Dystopia Rising is, in no small part, about crafting: in addition to the detailed costume guidelines in the rulebook, there are Facebook and Pinterest groups where people compare notes and show off projects, like hand-carved foam weaponry and armor they’ve made from hundreds of bottle caps. If you’re not a regular larper, a veteran cosplayer, or a theater devotee, the bar for a good costume can feel dauntingly high, and that’s before you start thinking about how to properly portray your strain of survivor. "Strains" are essentially your class or race, and they help shape the fiction of the world, indicating how other people will respond to you, what weaknesses and abilities you have, and how your ancestors made it through the collapse. They range from jingoistic "Mericans" to patrician "Pure Bloods" to the strain I would end up representing: the mutated, hideous Retrogrades. Generous players helped me assemble a sort of gritty black carapace, made of heavy plastic armor and an oversized duster, and a talented makeup artist slowly covered my face in a fantastic approximation of torn skin and open, weeping sores.

The game has a tabletop rulebook and a series of novels associated with it, but it was originally and is best known as a larp. Everything is done through a combination of game rules and acting, including fighting, which is done with foam weapons or "boffers." If you want to hurt someone, you can do something like swing at them with a club or throw a bag representing a psionic power, while shouting the damage you’re attempting to do. If you’re a good fighter with a powerful weapon on paper, that number is higher. But you still have to land the blows. While it’s not exactly realistic, larp combat isn’t an unskilled activity. Plenty of people, myself included, didn’t really know anything about fighting, but at least one was an experienced fencer who devoted nearly an hour teaching me how to wield two swords.

I’m not a stranger to RPGs or even entirely to larping. About five minutes after the game started, though, I knew that I was not remotely prepared for Dystopia Rising. I’d flipped through the manual but had forgotten most of what I knew about the complex system of religions, political bodies, and regional disputes that continued from game to game, and my character had only existed for a few hours. Dystopia Rising takes place in a big, complex world, especially when you consider the number of chapters spread across the country. In Hayven, there is a church that worships television signals. A handful of gangs occupy turf around the campground. Characters form tight friendships and rivalries that have nothing to do with real-world relationships. It’s not just a game, it’s a community.

Entering a community whose social mores you barely know, no matter how welcoming they are, is hard enough when you’re just being yourself. In character, every word became a multilayered strategic endeavor. In any given conversation, part of me was formulating the response I’d normally give, out of character. Part of me was frantically trying to tailor that response around my character, piecing together whatever background context I had. Part of me was planning long-term game moves — should I be looking for other people to talk to? Was I missing an interesting quest? And part of me was just hoping that I wasn’t boring the person I was talking to. If larp is something like collaborative theater, the other actors are also your audience.

Welcome to the church of Daft Punk

When Dystopia Rising went well, there were moments that felt natural, perfect. My first night was filled with gang warfare and hunts for a cult of radiation-worshipping Social Darwinists, but one of the parts I remember best was sitting next to a busker who played me a song from Hedwig and the Angry Inch, gave a mythologized retelling of the musical, and ended up explaining the origins of a group I believe was called the Church of Daft Punk (one of the conceits of the larp is that people can and do form religions around just about anything).

Over the course of each weekend, organizers run a series of nesting plot arcs — little hour-long modules, a weekend-spanning story, and pieces of a larger narrative that could play out over months or years. For most of my time as a character, these came up incidentally, when I stumbled onto a fight outside or heard someone talking about finding the creator of a radioactive glow cloud. But with few exceptions, every participant is also required to take a few hours of non-player character duty, filling the role of different people for specific story lines. It turned out that after the intensity of trying to play a real, moderately complex human being, becoming a mook was a welcome respite. I became a single drop in the river of narrative, important but undifferentiated, dying over and over while hitting people and telling them to join my cult or let me eat their flesh. It was almost zen.

After fighting a climactic battle in a rain-slicked field in the middle of the night, I returned to New York with plenty of physical reminders of Dystopia Rising, including my increasingly scummy makeup — one of my lasting regrets is that I got a ride to my apartment instead of sitting on a subway platform at midnight, wearing dirt-covered jeans and a rotting false face. I gave up trying to get the last fake blood stains out of a pillowcase I slept on, and I sustained a sprained ankle that’s still healing several months later. But the hardest part of coming home turned out to be trying to explain why it was so much fun.

When I participated in a nontraditional nordic larp in 2012, I could tell everyone that I was doing art. With Dystopia Rising, I couldn’t deny the more ridiculous-sounding aspects of the game, like the unavoidable fact that yes, I yelled numbers while hitting people with fake swords. It was easier to sound like a respectable adult talking about gender politics than about sleeping in plastic armor clutching a foam stick painted to look like a nail-studded board, in case a zombie attacked my tent. No one really objects to escapism, but if you treat it as more than a casual diversion or guilty pleasure — if you devote dozens of hours exclusively and passionately to something that doesn’t provide you with a demonstrable skill or a final product, something that can’t really be packaged or spectated — people will start to look askance.

I haven’t gone back to Hayven, and I’m not sure whether creating a character and throwing myself into it again is an investment that I’m capable of making, especially given how difficult acting the part actually was. But it’s the kind of experience that I feel better for having done. I hope that whatever’s going on out there, the bar is still running and people are still using "Get Lucky" as a holy text.