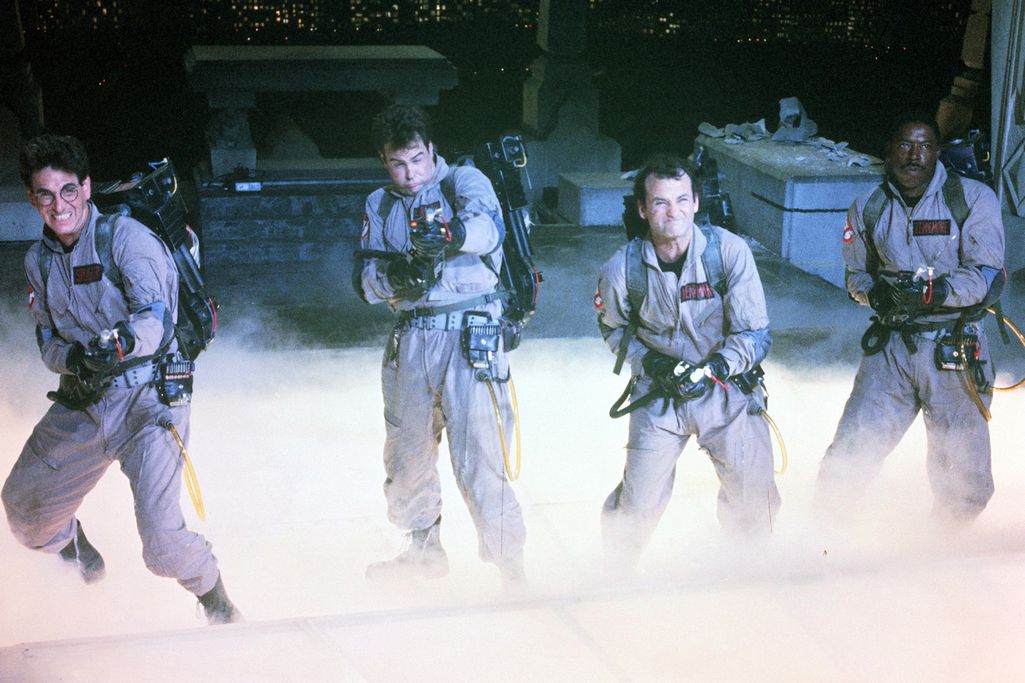 For over 25 years, John Bruno has created some of the most memorable visual effects in film, and he’s got an Oscar (and a pile of nominations) to prove it. His credits include classics like Heavy Metal, Batman Returns, and Ghostbusters. And his collaborations with longtime friend James Cameron gave us The Abyss, Terminator 2, True Lies, Titanic, and Avatar. For all of these, Bruno has dictated the style and substance of the surreal and supernatural on our screens.

Most recently, Bruno took a turn in the director’s chair to document James Cameron’s historic dive to the Challenger Deep at the bottom of the Mariana Trench, which lies 36,000 feet below the surface of the ocean – the deepest place on earth.

We caught up with Bruno over the phone to take a look back — and forward — at how he’s put such a strong mark into the movies.

Interview has been condensed and edited for clarity.

What does a visual effects supervisor’s day look like?

Let me say I’m an old-school visual effects supervisor. I’ve been doing this a long time. To me, a visual effects supervisor is someone who analyzes the script, analyzes the shots, storyboards, and supervises how to best achieve the shots to make them fit into the film without drawing attention to themselves. Now it’s different with something like Transformers where you want it to look real and it’s a fun thing and the whole point is to be crazy. But in most films our shots are supposed to be not noticed. In general, I think the job is to try to not draw attention to itself.

Do you find that it’s easier to do that with the technology available now, or was it easier to be more restrained and elegant with it 20 years ago?

I keep telling everybody I hate visual effects. Only in the way that today everything has to look so real, and it’s really, really hard to do that. Whatever the visual effect is cannot distract from the scene itself. It cannot make you go, "Oh, this is an effects shot." So it’s much harder today, but digitally you can do anything. Given enough money, you can make anything, but the thing that pleases me is when editors are confused when they’re putting things together, and they’re saying, "Now this is live action, right?"

"I keep telling everybody I hate visual effects."

These days, you can look at movies that came out only five or ten years ago, and they already look dated, or they don’t look real. But in my opinion, most if not all of your older work seems to hold up well, even The Abyss. Why do you think that is?

The Abyss is very cool. The amount of data storage available then was like 6 gigabytes. That’s what we had to make that movie. And it still holds up. The water pseudopod was basically digitally created but optically composited. And people probably won’t understand what that means today, but basically it had to look photographic. And that led to Terminator 2.

So when you were working on The Abyss, was Terminator 2 on the horizon?

When Jim [Cameron] started writing Terminator, we were doing storyboards. Jim draws really well, and we draw together, trying to block things out in those early days. We talked about this liquid mimetic fluid system that became the T-1000. How do we do this? The discussion was around one shot where the 18 wheeler crashes into the bridge, and he walks out it. So, Jim says, "Maybe make it gold? Make it different." At that time in the computer-graphics world, everybody had a chrome object that they’d produced, every facility. We said, "Well it would look like a walking Oscar, so we can’t do that." But the byproduct from The Abyss, the first thing that came out of the computer was like liquid mercury — what became water was chrome at first.

So when there’s a scene in Terminator 2 when the T-1000 on the motorcycle crashes through a window on the second floor of an office building and catches a helicopter, and he pours in through the window; that’s exactly what the first element, what the first pass of The Abyss looked like.

The other theory that I ascribe to is: do as much in-camera as possible. [In Terminator 2], you see bullet impacts [on the T-1000] ... That was practical. Stan Winston called them flowers. They would pop open, and they were chrome. And we also intercut the T-1000 running with chrome claws. You try to do as much as possible in-camera. Going to True Lies, we built a full-sized Harrier jet and hung it on a crane off a building and filmed it flying over the streets of Miami. That was in-camera. It was real.

So, looking back on some of those projects, are there things that wanted to do, but couldn’t because of financial or technological limits? And in hindsight, do you think you’re better or worse off because you couldn’t do them?

I think that we’re better off because we couldn’t, and we had to do it practically. I think people rely too much now on "just throw it into visual effects." It’s actually more expensive to do that. If you do more things practically, there’s an expense up front, with principal photography. But that expense will be offset by the cost of doing it digitally in-post. If you see stuff in principal photography, in camera, as much as possible, you can cut your movie, and you also know what the lighting is, what the dimensions are of sets or cars or planes or creatures that you can then match to for photorealism. For me it always comes back to photorealism and I desperately try to make that happen. It drives me crazy. And I drive directors crazy. Working with Jim, that’s not an issue because he also demands that it look real.

"We built a full-sized Harrier jet and hung it on a crane off a building and filmed it flying over the streets of Miami. That was in-camera. It was real."

When I was working on [the Ivan Reitman-directed] Ghostbusters, the big movie was going to be Indiana Jones and the Temple of Doom. Ghostbusters was off the radar. Nobody cared, you know? We did that movie in 10 months, start to finish. Meaning, again, we did as much in camera as possible. We didn’t have CG then, and I don’t know if it would be better if it were done digitally today.

Well, I’m prone to the work done by Weta [Digital]. The best thing I’ve seen this year is [Dawn of] the Planet of the Apes. It’s staggering. I called Joe Letteri at Weta and just said, "In the world of visual effects you are Caesar and I am but a chimp." I swear to God I said that to him. The visual effects were so tactile, I don’t even know how to explain it. It was just immersive. That is so hard to do.

So how did you come to be direct the Deepsea Challenge documentary?

Well, not only was it a great opportunity but it was a sad opportunity. I wasn’t involved in the film in the beginning. At heart I’m an explorer. I’d bought a ticket to go to Papua New Guinea and join the expedition just to tag along. And the last information I had was Andrew [the original director] saying, "if you show up I’m going to put you to work."

I got the call at 2:00AM from Jim saying, "Something terrible had happened. Andrew and Mike are no longer with us. You’re the only person I can think of that knows the equipment and has been on deep-sea expeditions. Would you be willing to direct this?"

And, I’m packed, man. Two days later I was on a plane reading the script, written by Andrew and John Garvin. I was just thrown into it with no prep. I had filmed at sea before so I kind of had things in my back pocket, you know. "Start here until I find the story."

I know Deepsea Challenge wasn’t your first experience as a director, but in terms of the story you just sort of had to figure it out. What was that like for you?

This may sound strange, but I did have a 25-year working relationship with Jim. I wasn’t intimidated by him. People say, "What’s it like to direct him?" It wasn’t really an issue. I know there are standards that I have to meet, but he made it very clear that he was diving, he had to worry about coming back. He didn’t want to worry about filming. That’s my job. He said, "I know you know what to do. I’m leaving you alone. It’s on you."

"At heart
I’m an explorer."

And so I had this list, a pecking order of importance, just so I wouldn’t go crazy. I said, "We’re going to get some cool shots of the sub. I’m going to learn where we can shoot, how we’re going to do this." I relied very heavily on my DP, Jules O'Loughlin, and David Wotherspoon was our launch control officer. We had to find out where it was safe to film from because there are cranes and winches and cables crossing the deck. There was a safety zone, and we drove Dave crazy because suddenly, here are a bunch of film jerks that have been thrown in his safety zone of protection.

The difference between a documentary film and a live action studio production is that a documentary crew never sleeps. You’re on 24/7, because if something goes wrong with the sub, something has to be repaired, or there are night operations launching science platforms… You gotta be there.

So we would sort of figure out who could sleep and who could be awake. It’s like, "Alright, you guys get two hours of sleep, at 4:00 in the morning this lander is going to be launched or recovered, and we have to see if there’s anything on it…" And Doug Bartlett, our microbiologist from the Scripps institute [of Oceanography], I’d follow him because he always had fun little things to say. And we also had geologists on board. So any of this stuff that was happening we’d have to be available for. It just made for a stressful event. But it was worth it because when we started seeing footage we were going "Well, we don’t know how this is going to end. We don’t know the outcome, but we’re going to cover it no matter what." And I promised Jim that, too. That no matter what happened, no matter which way the story goes we’re going to cover it, we were never going to stop shooting.