I've spent close to two dozen hours playing Destiny. I completed a galaxy-spanning quest that took me to Venus and Mars, teamed up with complete strangers to take down massive space monsters in thrilling boss encounters, and jumped into a free-for-all multiplayer combat arena where I died many, many times. I spent an embarrassingly long time agonizing over which weapons to equip and what armor provides the best compromise between function and style. Hell, I even downloaded a mobile app so I could check on my character when I wasn't near a console.

It's a game I love, and a game I hate, and it's one that I can't seem to stop playing.

Developed by the team behind Halo, Destiny is a mixture of a first-person shooter and an online role playing game. It has the good aspects you'd expect from that combination: amazingly well-tuned combat, absolutely beautiful sci-fi worlds to explore, and an addictive upgrade cycle that has your space gunslinger character constantly leveling up with sweet new guns and gear. But these features are weighed down by an incredibly tedious structure that has you doing the same basic thing over and over again, often in the the exact same locations. It's repetitive to the point of frustration.

At its best, playing Destiny led to some of the most thrilling moments I've experienced in a game in years, with intense fights against giant space tanks and magic-wielding aliens. But half of the time I was just bored. 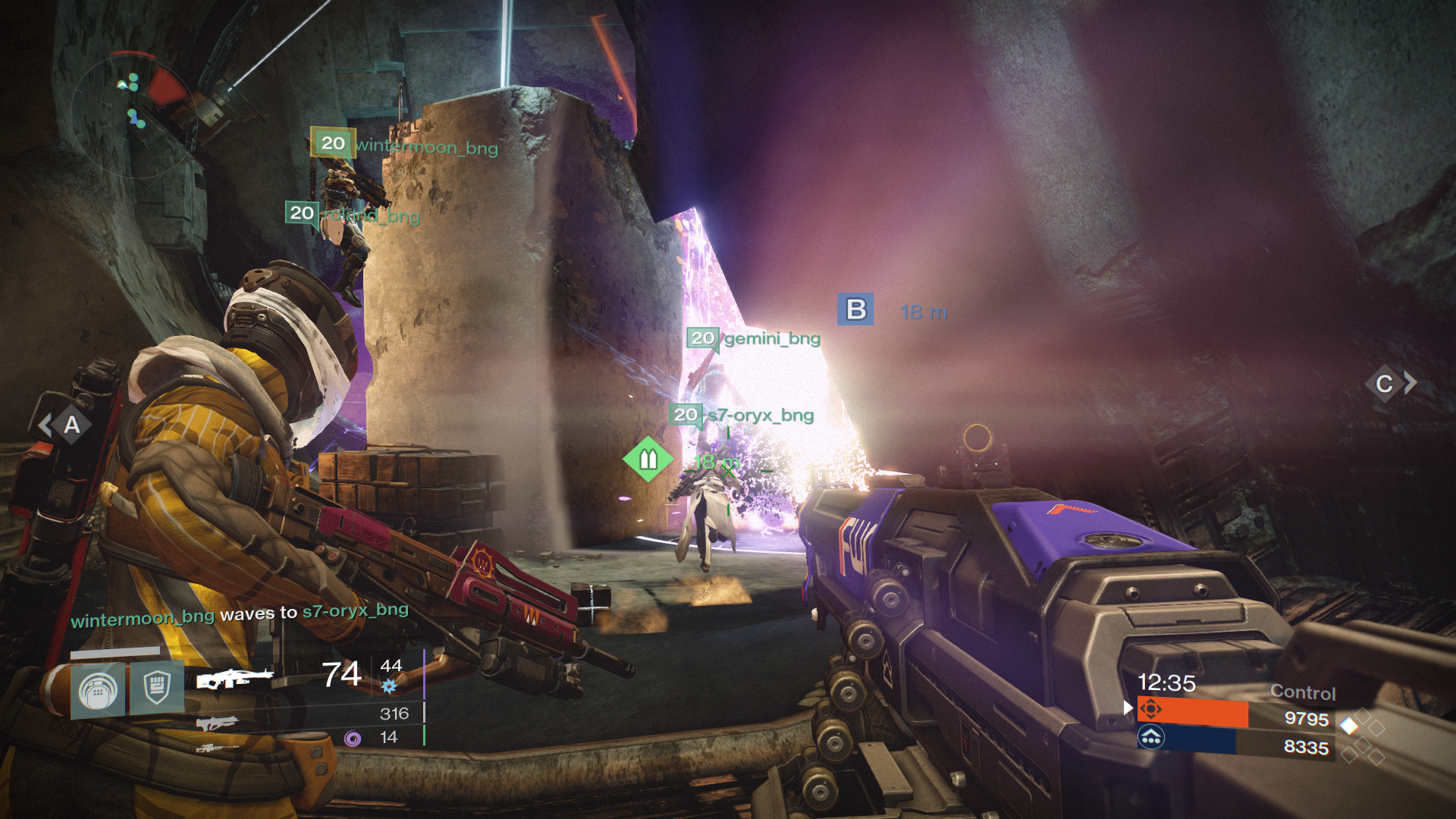 Destiny is a game that's almost entirely about one thing: shooting. You create a character by choosing from different classes and species, but no matter who you choose, the focus on guns remains the same. There's nothing particularly innovative about Destiny's combat — it's not far removed from Halo — but it feels like a perfected version of something we've all played many times before. The control layout is intuitive (I don't think I've once hit a wrong button so far), and everything from the power of the guns to the satisfying melee combat just seems right. It's hard to overstate just how good it feels to throw a knife into a charging robot's face and watch it explode.

This slick combat can lead to battles that are incredibly intense — often you're up against powerful bosses that can take 20 minutes or more to take down. When you finally make it through these marathon missions, it's satisfying in a way that few other shooters can manage. They may be lengthy, but because the action in the boss battles never really lets up, the experience remains tense the entire time. I caught myself holding my breath on more than one occasion.

It can be fun alone, but these large-scale conflicts are particularly enjoyable when you team up with other players. Destiny is at its best when you're playing cooperatively, which you can do with both friends and strangers. The gigantic bosses (which sometimes come in groups) are joined by plentiful weaker enemies that turn the battle into chaos. Having a few friends along makes it a bit easier to keep that chaos in control. 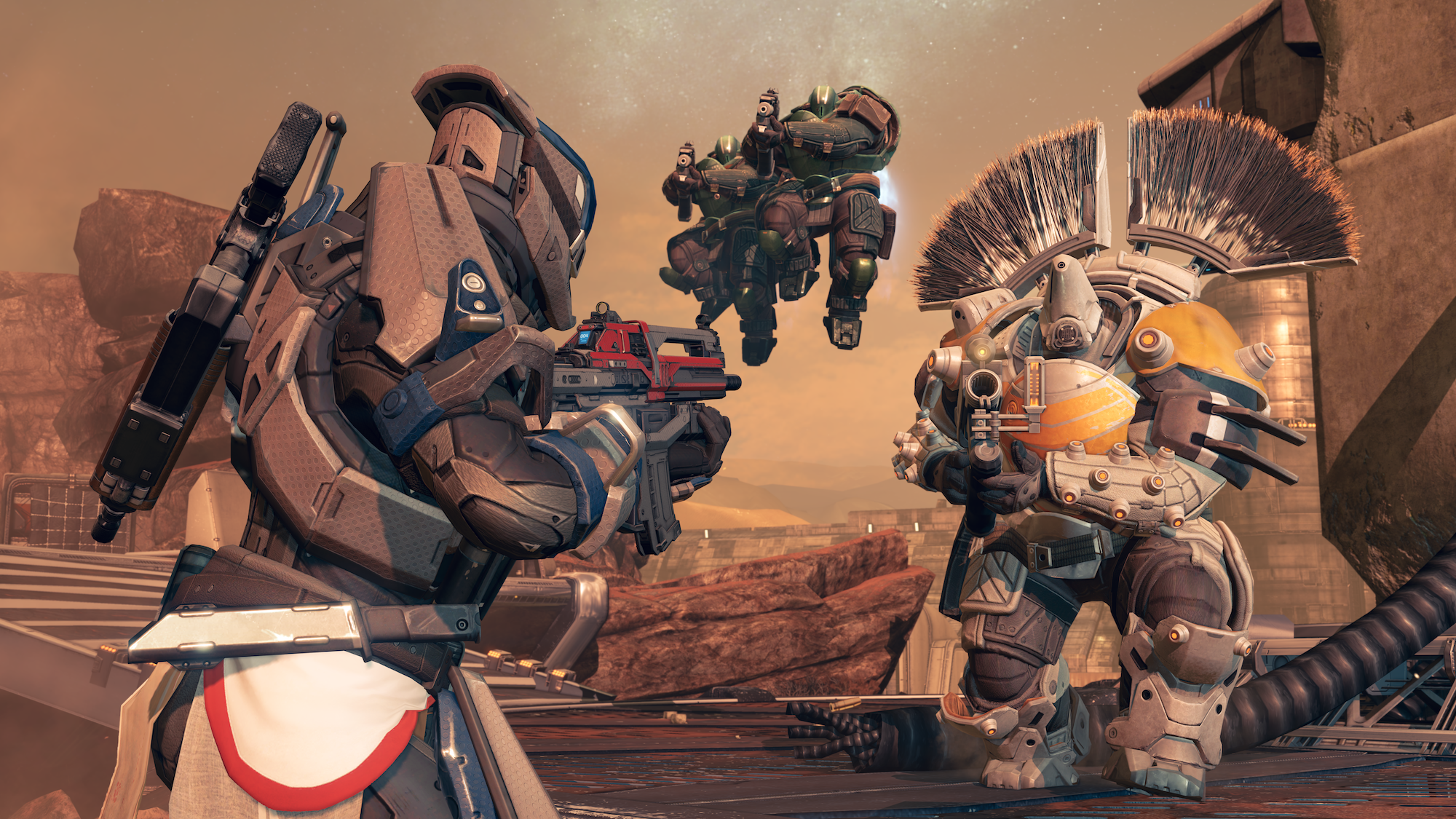 Just like in an RPG, completing missions and defeating enemies earns you experience and gear, which you can use to regularly upgrade your character. There's a huge assortment of weapons, skills, and armor in the game. New, significantly better gear unlocks pretty regularly, creating a cycle that can make it hard to stop playing — I would often find myself playing "just one more mission" so that I could earn enough experience to buy a sweet new helmet or machine gun. Of course, once I got that gear, there was something even better just over the horizon, creating a vicious cycle where I just couldn't stop playing because I needed the newer, better loot.

The gritty realism of Fallout mixed with a Chris Foss painting

It's not a new concept — it’s the same reason I had to uninstall Diablo from my laptop — but Destiny pulls it off expertly. Whereas shooters like Halo or Bioshock have everyone play as the same character, Destiny makes you feel that much more invested in your character because you have a hand in shaping how they look and act. It doesn't hurt that Destiny's ruined sci-fi aesthetic means that the characters all look pretty badass and unique. My character is a robotic alien gunslinger, who wears ragged cloaks on top of colorful, futuristic armor. She looks like the ultimate killing machine, which is exactly what I was going for.

The worlds you’ll be exploring are just as beautiful. Destiny features the gritty realism of a Fallout game mixed with the colorful, crazy future of a Chris Foss painting. One of my favorite things to do is simply walk around the Tower, the last safe city on Earth that serves as the game's social hub, where you can hang out with other players in a safe, combat-free setting. I spent far too much time just watching the sun rise over the burned-out remains of our planet. And when I'd look around, I'd see plenty of other players doing the same.

There are moments when all of these aspects work together, and it can be pretty incredible. The large-scale battles in Destiny are immensely satisfying, and unlocking and equipping new gear is incredibly fun. If only that were the case with every aspect of the game. 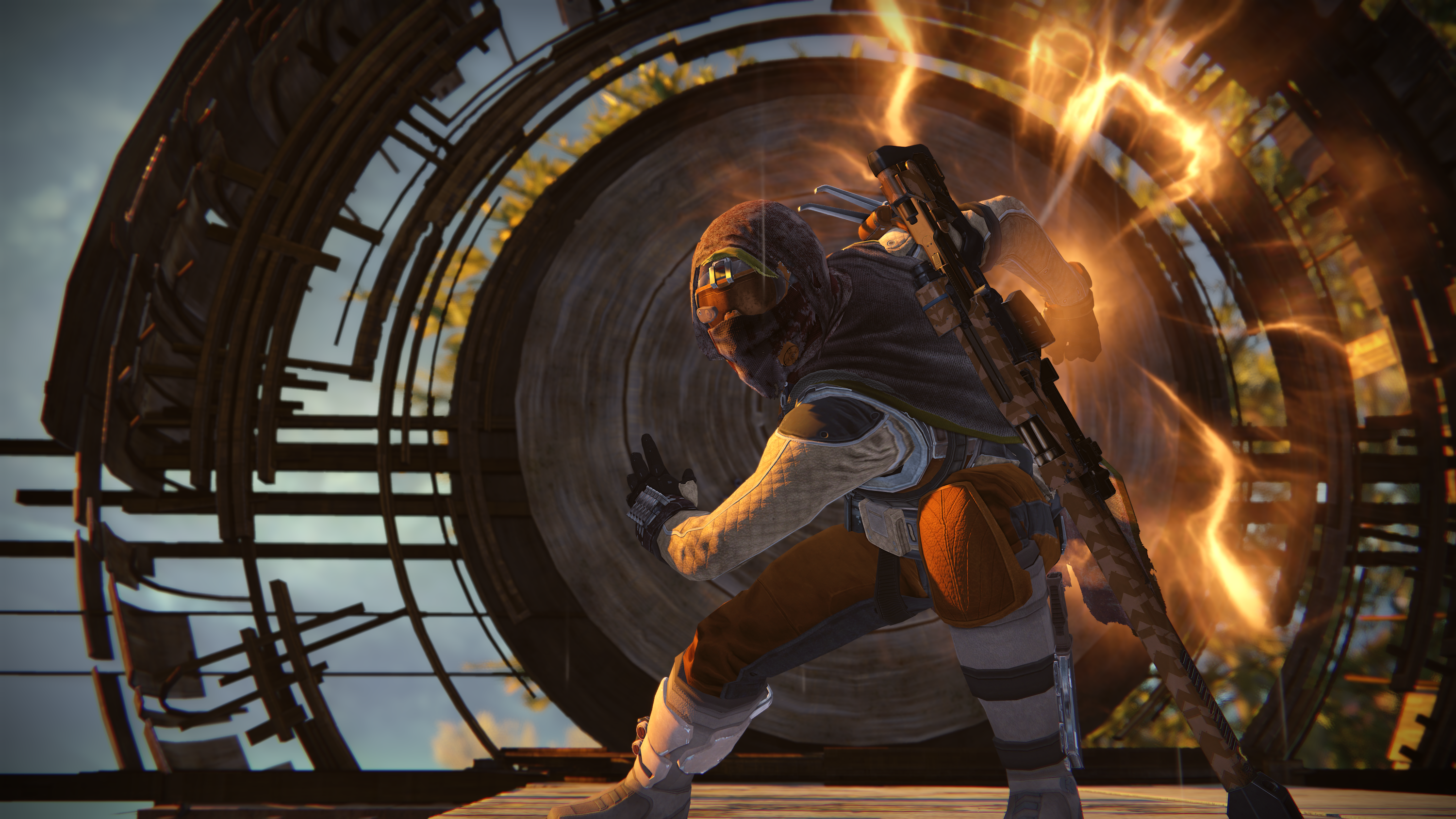 The single biggest problem with Destiny is its missions. Outside of some interesting bosses and co-op excursions, every single mission in the game features the exact same structure: you go to a destination, make your way to a point of interest, fight off a whole bunch of bad guys, move to a new location, rinse, repeat. There’s no variety. It's to the point where you already know what will happen before it does.

Destiny has the fundamentals for wonderful combat, with its great weapons and fantastic controls, but it's wasted on a never-ending barrage of tedious encounters. The non-boss creatures that you'll come up against are rarely interesting to fight; they're dumb, predictable, and they always attempt to overwhelm you with numbers. And though you move on to new planets with new enemies, they all act pretty much the same. The side missions are even worse, forcing you to take on mind-numbing fetch quests that involve going somewhere to collect 50 of these or kill 10 of those. It's boring, and made worse by the fact that there are so few locations in the game. Destiny spans three planets and the moon, but you only get to see a very small section of each. Many missions will have you venturing into the exact same places you've already been, to kill enemies you've already killed.

To make matters worse, you can only skip some of this filler content. The main story missions won't earn you enough experience to progress, so unless you fancy taking on missions well above your experience level, you have to do some grinding through the boring side quests just to keep pace. As with any game, this is alleviated a bit if you're playing co-op with some friends, but Destiny's campaign is an absolute slog to play through solo. It's a whole lot of boring punctuated by a few interesting battles.

Destiny's story is terribly written, poorly acted, and so nonsensical that I have no idea what actually happened

Destiny's other key problem is that it consistently over promises. It invites you to explore a beautiful, genuinely interesting sci-fi universe, but then only lets you see a sliver of it. Its story acts as if it's a huge, galaxy-spanning epic on par with Star Wars, complete with the voice-acting talents of Peter Dinklage and Bill Nighy. The reality, however, is that Destiny's story is terribly written, poorly acted, and so nonsensical that I have no idea what actually happened. The only good thing to say about the narrative is that there's surprisingly little of it. This is a tale so drab even Dinklage sounds bored.

Instead of creating something new, the team at Bungie has built an awkward hybrid that merges a satisfying shooter and RPG with some of the worst aspects of an online game. The lack of mission variety and the terrible story are just the two most egregious examples. And the shooter elements don’t all fare so well, either. There are competitive online modes, but they’re the same team deathmatch and control battles you've seen in plenty of other games. While Titanfall proved that it's possible to build a competitive shooter that's fun even if you're not amazing, Destiny makes no such concessions, leading to an experience that's really only enjoyable if you're very skilled. Everyone else will just get frustrated. 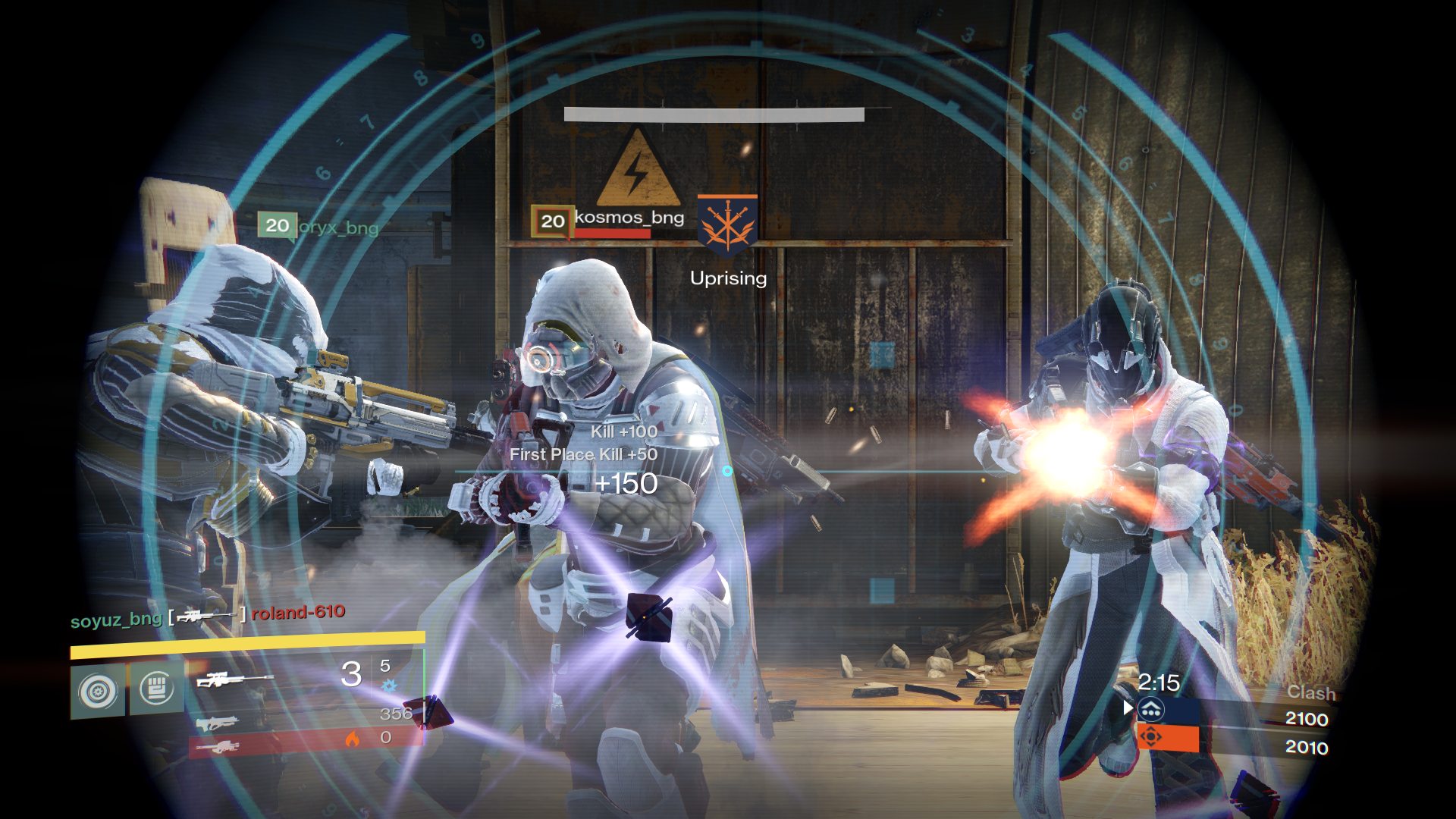 The most amazing thing about Destiny is that, as much as it both bored and enraged me, I'm still playing. Not everyone will have that kind of patience, but if you can push past the tedium, this game reveals glimpses of what could have been: a challenging and addictive RPG with combat ripped out of Halo. It's a formula that seemingly can't miss, yet Destiny does everything in its power to screw it up.

The silver lining is that Destiny is an evolving universe. The franchise is a $500 million investment from publisher Activision to build something huge, and Bungie is already upgrading the game with new content and tweaks to the overall gameplay. But that won't fix the game's fundamental flaws, which stem from a structure that makes most of the game a chore. Updates might make Destiny better, but it's hard to imagine it fulfilling its potential.

Destiny 2, though, that could be something truly special.