The morning after I visited Next Millennium Farms, my digestive system expelled its first cricket exoskeleton. There it was, floating on the water’s edge of my hotel room toilet: a translucent thoracic shell with three legs still attached. Presumably, the others got lost in the gastrointestinal shuffle, but I didn’t look long enough to try and spot them, or any of this particular insect’s friends and relatives. I had been eating a lot of them.

Next Millennium Farms (NMF), located about 90 minutes outside of Toronto, Ontario, is part of a movement to introduce crickets — fried, baked, or milled into flour — to the North American menu. The insect’s nutritional benefits, combined with mounting concerns over the environmental impacts of meat production, is prompting conscious food producers to see the pest in a new light, turning cricket meal into everything from protein bars to cookies. 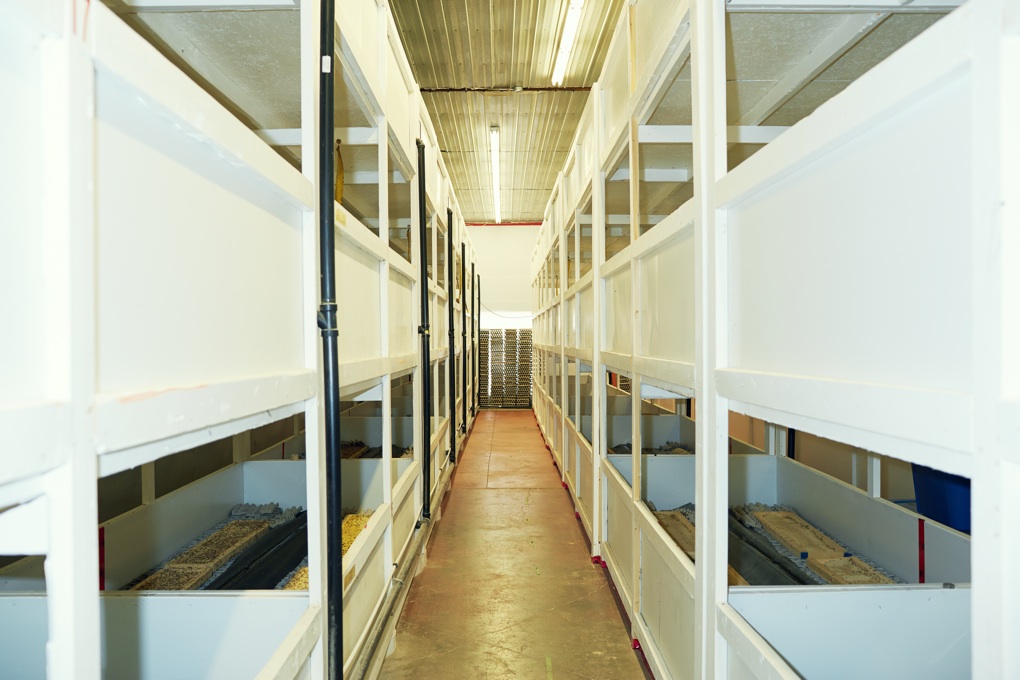 Launched in late 2013 by three brothers — Jarrod, Darren, and Ryan Goldin — NMF is a major supplier of cricket flour, which Jarred describes as "floured meat." "It’s chock-full of protein, has more iron than spinach, as much calcium as milk, all the amino acids, tons of omega 3, and tons of B12," he says. "So not only does it taste good, it’s also unbelievably healthy." The company expects to ship 3,000 pounds of flour in September alone; by year’s end, they predict that figure will rise to 10,000 pounds a month. "We’re having fun and this [growth] is all awesome," Jarrod says, "but the amazing thing is that it’s not compromising nature — or taste."

I’m standing with Jarrod and Darren in front of Reptile Feeders, the Goldins’ original pet-food business and the first stop in my daylong tour of NMF. The company also sells a line of edible worm snacks, and those worms are currently housed in the same facility as the insects, rodents, and pythons being bred for pet shops. Darren and Ryan’s love of snakes is how the Goldins got involved with crickets in the first place, Jarrod says. "They realized that you can sell a snake to somebody once, but if you also sell insects, they’ll come back to you every week."

The two brothers founded Reptile Feeders six years ago, but it wasn’t until 2013 that Jarrod quit his job as a chiropractor to join them in a new venture to push insects as food for people. "The UN came out with documents on insects for food and feed security," Jarrod explains. "I looked at it and I said, ‘Maybe this is finally the right thing [for us.]’" A few weeks later, The Clinton Global Initiative gave a $1 million grant to Aspire, a McGill University project aimed at bringing insect farming to the developing world. "I called my brother Darren and said, ‘This is bullshit, we know more about insect farming than anyone, and we should get this going.’" 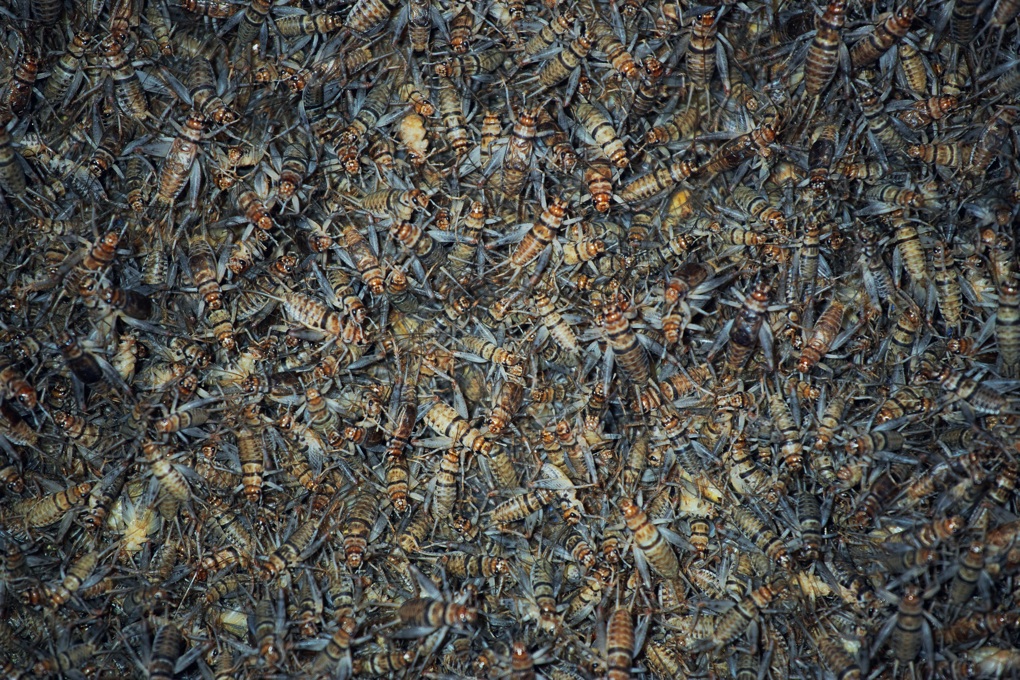 "Not only does it taste good, it’s also unbelievably healthy."

After a tour of Reptile Feeders, we drive over to the cricket farm, a 9,000-square-foot warehouse about 20 minutes away. The building’s huge doors have been thrown open, so we can hear the chirping as we approach. The inside is clean and brightly lit. Inside, two employees are piling large plastic containers of live crickets atop one another. One of the meat grinders’ motors blew out, Darren explains, so they haven’t been able to grind crickets into flour at their usual pace. They’re keeping them alive in the meantime, because the crickets are always ground up shortly after they’re dead.

Beyond the plastic containers lie the wooden cricket bins. These open-air containers house the crickets that aren’t ready to be turned into flour yet. Each is equipped with an automated system that provides hydration and food. Inside the bins are two rows of elevated "cricket condos" — egg cartons stuck together and stacked vertically. According to Jarrod, each bin holds between 70 and 100 pounds of crickets. He estimates that the entire facility houses well over 30 million crickets at any given time.

"We want to remove all the dead and unhealthy crickets from the mix of crickets before we cook them," Darren says as he demonstrates the harvesting process. This consists of grabbing one of the cricket condos and shaking the insects vigorously into a large plastic tub. Many of them jump out. Then, Darren drops the condo back into the tub for a few seconds, and the young and sprightly crickets jump back onto the condo. Those that aren’t quick enough are removed. 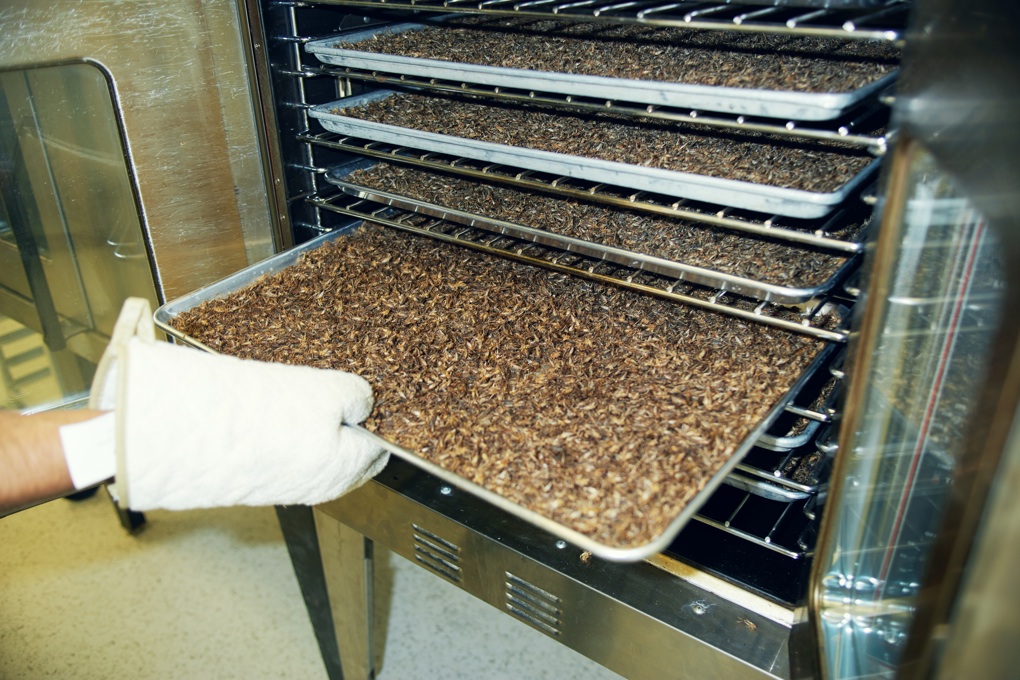 "We do this three times," Darren explains, so by the third condo-shaking, only the liveliest of insects remain. "I don’t think it makes a difference nutritionally," Jarrod adds, "but the optics are important."

Once the crickets are gathered, an employee euthanizes them using carbon dioxide. After that, they’re transported to the processing facility, a townhouse about 30 minutes away. We stop by as Derek Delahaye, NMF’s cook and product facility manager, is rinsing one batch of dead crickets with warm water, and baking another at 230 degrees Fahrenheit for two hours. Meanwhile, a blond-haired man wearing gloves and a hair net shakes freshly baked crickets out of a plastic tupperware and into meat grinders in an adjacent room. It’s crunch time: the Goldin brothers are filling a big order for Exo, a company that manufactures protein bars with NMF’s flour and currently sells 50,000 bars a month.

"It tastes strong and distinctly meaty, and it has a sandy texture."

Jarrod doesn’t have any Exo bars on hand, but he does have a plethora of insects for me to try. First, he opens a bag of plain baked wax worms and lays them on a table. They taste like chicken skin, or maybe roasted chickpeas. Next up are honey-mustard crickets. They’re crispy like bacon, and the seasoning is a nice touch. Finally, I try the cricket flour. It tastes strong and distinctly meaty, and it has a sandy texture. Still, it could definitely be mixed with conventional flour and concealed in a baked good.

According to Jarrod, that’s how most customers use it. Companies like Exo and Mark Cuban-backed Chapul use NMF’s flour to make protein bars, while Six Foods is using it to make "chirps" (cricket-infused tortilla chips), and Bitty Foods produces cookies and a custom flour blend for home baking. NMF’s goal is to capitalize on the nutritional content of cricket flour — and for the most part they have — but there’s one unexpected issue that’s been holding them back: the product’s name. 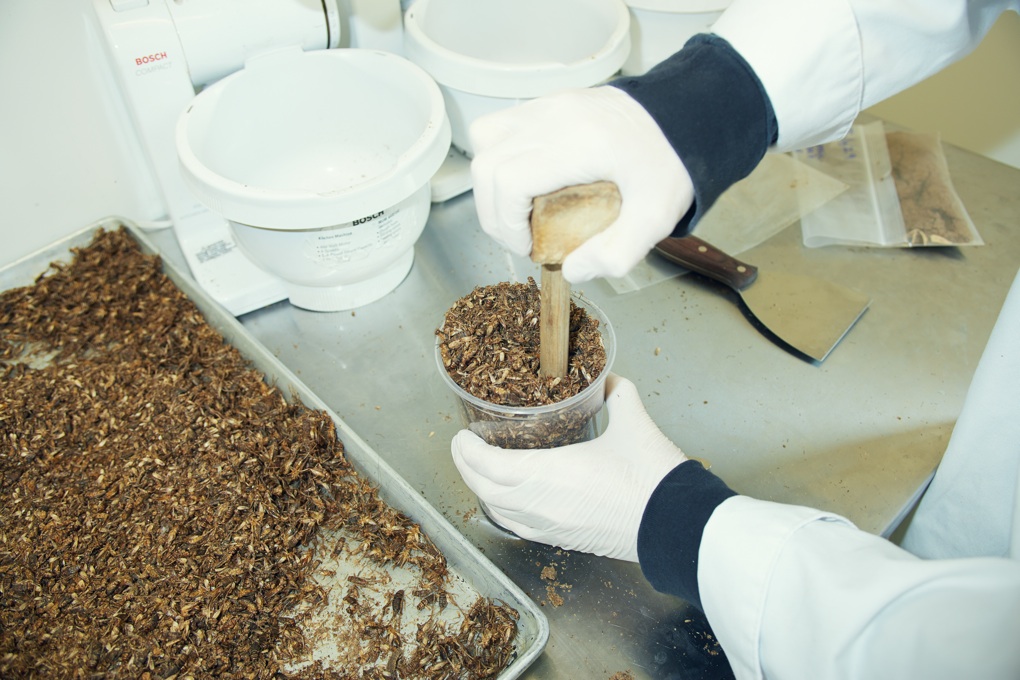 "The industry made the initial mistake of labeling it as flour," Darren says. And "it’s very hard to take back." A single pound of cricket flour contains 317 grams of protein and costs $40 online, making it more akin (in nutritional content and price) to protein powder than baking flour. Yet the fact that previous manufacturers chose to label it as "flour" years ago means that people — reporters from The New York Times, for example — tend to compare its cost to plain white flour. "It’s like saying well, compared to a Honda Civic, a Ferrari is expensive!" Jarrod says. "Well it is! But how can you compare those two cars?"

To counter this issue, the Goldins have decided to make their product even more specialized. They’ve just launched a line of gluten-free crickets, that are fed grains like rice and corn instead of wheat, and have plans for a Paleo line. An organic certification is also on the horizon — but because of a convoluted regulatory process, the crickets’ feces have been certified organic and the company is now waiting on certification for the crickets themselves.

The crickets are always ground up shortly after they’re dead

Still, the red tape that surrounds selling crickets for human consumption hasn’t been overwhelming. Once the brothers got a permit to import a new species of cricket — the tropical house cricket, which is resistant to a virus that can decimate entire cricket farms — they were essentially cleared for business by the Canadian government ("they can’t [survive the winter] in Canada," Jarrod explains, so there’s no danger of them becoming an invasive species). The US has been equally lax, allowing the company to operate under GRAS self-determination, an FDA regulation that allows qualified outside experts, like those who authored the UN report on edible insects, to determine if a product is safe, instead of going through government officials.

When you think about it, Jarrod says, this makes perfect sense. More than a quarter of the entire human population eats insects on a regular basis, he says, so "it’s not a novel food." The Western world has chosen to pass on eating insects for the past few hundred years, and it’s the Goldins’ plan to bring them back. 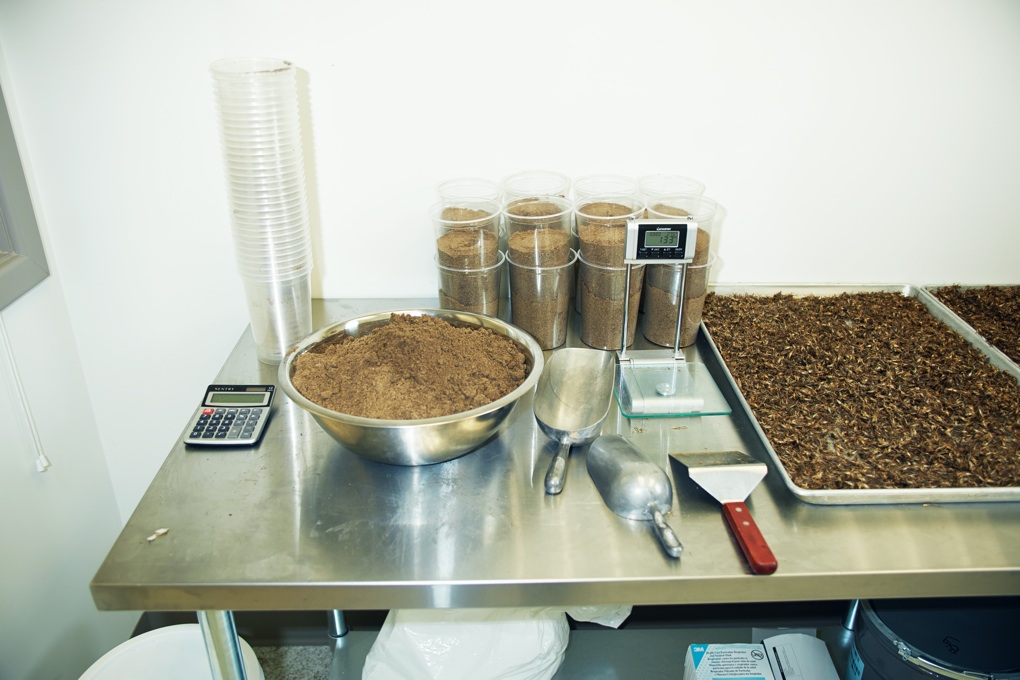 As I bring one to my mouth, I see an insect leg poking out of the corn tortilla

It’s almost 4PM and we haven’t had lunch yet, so Jarrod and Darren take me to a Mexican restaurant called La Hacienda close to NMF’s facility where NMF’s crickets are used in one of the taco dishes.

"When we started NMF, I really intended to position this as a carbon-footprint company," Jarrod says. But potential customers were more interested in nutrition than the environment. "How could we be so naive to think that people would care more about the environment than themselves?" These days, the company promotes the flour’s vitamin and amino acid content instead. The hook doesn’t really matter to Jarrod, as long as people start thinking about protein differently.

As we chat, I glance at the "tacos de grillos" sitting in the middle of the table. For the first time today, my stomach churns. As I bring one to my mouth, I see an insect leg poking out of the corn tortilla. "It’s good," I tell Jarrod and Darren, and I’m not lying. But I’d prefer to only eat one. 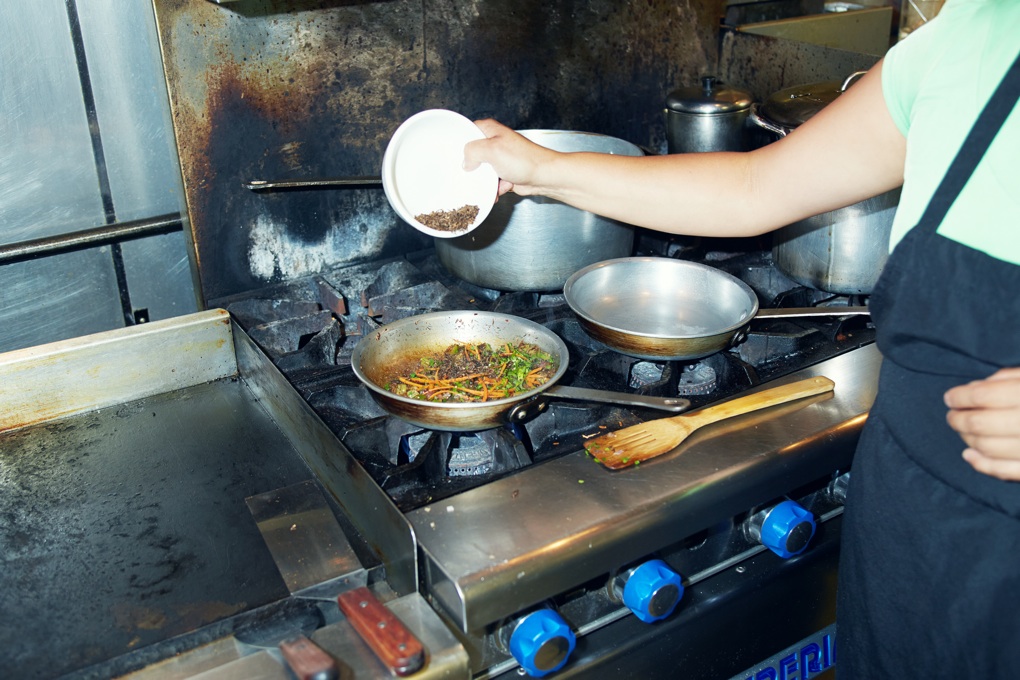 "People come here just for the cricket tacos, and they like it!" says our server, Rosa, as she clears our plates. "They say it tastes like chips." To me, the crickets’ distinctly meaty flavor is more like bacon, and I ask if she’s sampled them. "You know, I work here, and you have to try it so you can tell the customer what it tastes like," she explains, her face now impassive. "Eating them isn’t the end of the world."

Jarrod smiles through the exchange, and nods when she leaves. He knows he can’t convince everyone that eating insects makes sense, but there are enough people out there already intrigued. "We literally can’t produce and grow fast enough to meet the demands of the people who are interested," he says, "so we aren’t considering the people that aren’t." 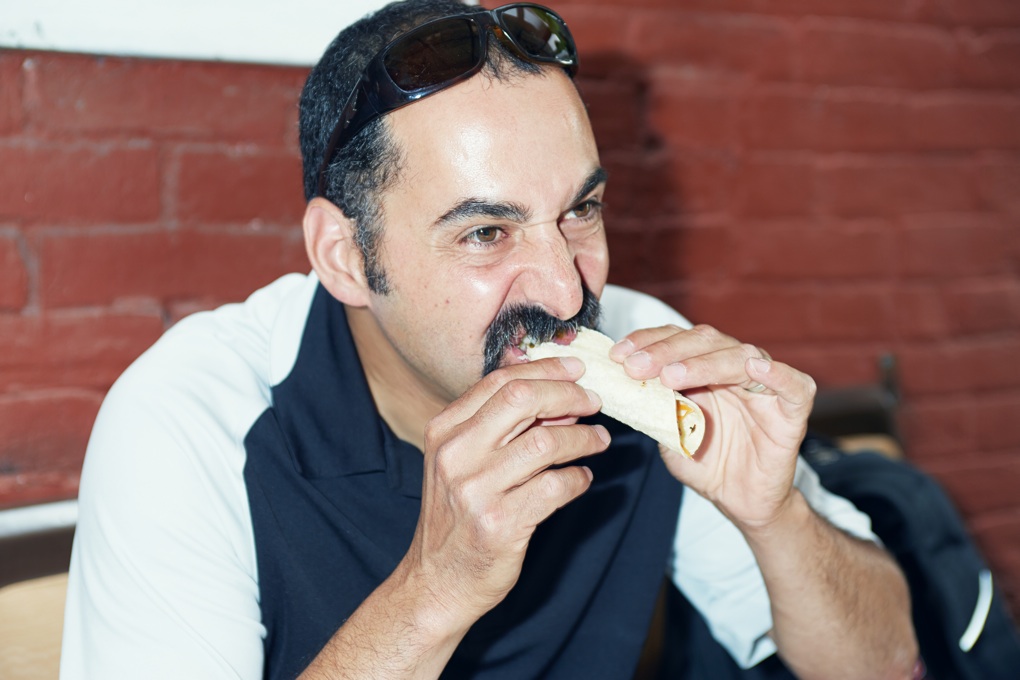 "People come here just for the cricket tacos, and they like it!"

Since their initial investment round — a single investor (who requests anonymity) gave them $50,000 in exchange for a 5 percent share in the company — NMF has grown at a tremendous pace. That shouldn’t be surprising, given the lack of competition: Jarrod is aware of only two other cricket-flour companies in North America, World Ento and All Things Bugs, and they use leftover breeder crickets from reptile feeders rather than crickets reared specifically for humans. "There’s no controlling which crickets go into the mix, or what they’re eating," he notes, so NMF’s product tends to win out with companies who want to make sure their ingredients are safe.

Competition will come at some point (a farm in Ohio has plans to start shipping dried crickets raised for human consumption this fall), but for now the Goldins are basking in their head start. In five years, Jarrod says, he’d like to see NMF open farms internationally. "One day," he says, "we’ll walk by people at restaurants who are eating steaks, and we’ll give them a bad eye."