One of the first things Stuart Lombard will tell you is how much he spent on the solar panels that are on top of his house. It's not to brag so much as to explain why buying one of his company's new $249 thermostats is as good of an idea as strapping $26,000 worth of solar panels to your roof. It saves, he says, about as much energy as the solar array by doing a better job at regulating indoor climate controls.

Lombard co-founded Ecobee, a Canadian company that made the world's first Wi-Fi-connected thermostat, only to spend the past three years watching the world fawn over its competitor Nest's futuristic design. Today the company is unveiling its answer to Nest, the Ecobee 3. It's a jet-black square with rounded edges that looks like nothing else the company has made before, especially its predecessor: a white box with a touchscreen that Ecobee sold patterned Gelaskin stickers for, basically to hide the thing.

By comparison, the Ecobee 3 is something the company wants you to stop and look at each time you walk by it in your house. When it's not showing you the temperature inside your house, it doubles as a weather station, giving you the upcoming forecast. And just like Nest, Ecobee is pitching it as something that does all the scheduling for you, saving time and money in the process.

The interface is the same on your phone

The 3 is the result of a two-year collaboration with Lunar Design, a boutique design group headquartered in San Francisco that has designed everything from Apple's first notebook computer to ice cream scoops. The two companies took all the features from Ecobee's existing model and have constructed a new user interface that looks and functions the same whether you're using it on the wall-mounted thermostat or on your phone. That's not a new idea in the world of apps (or even thermostats), but has resulted in software and hardware that feels like one in the same.

The new thermostat uses a capacitive touchscreen, with colored pixels that pop out from a black background as you approach it. Where Nest and Honeywell's Lyric zig with color, Ecobee zagged with dark contrast. Ecobee has also strayed from the idea of a rotating, circular dial, choosing instead a virtual knob that can be maneuvered up or down a track to change the temperature. The same screen then fades to show you things like the local weather forecast, and will let you create and adjust programming schedules. If you're on a tablet or connecting to your thermostat in your browser, you can see this interface and just about every other feature on one screen so you don't have to dig through menus. 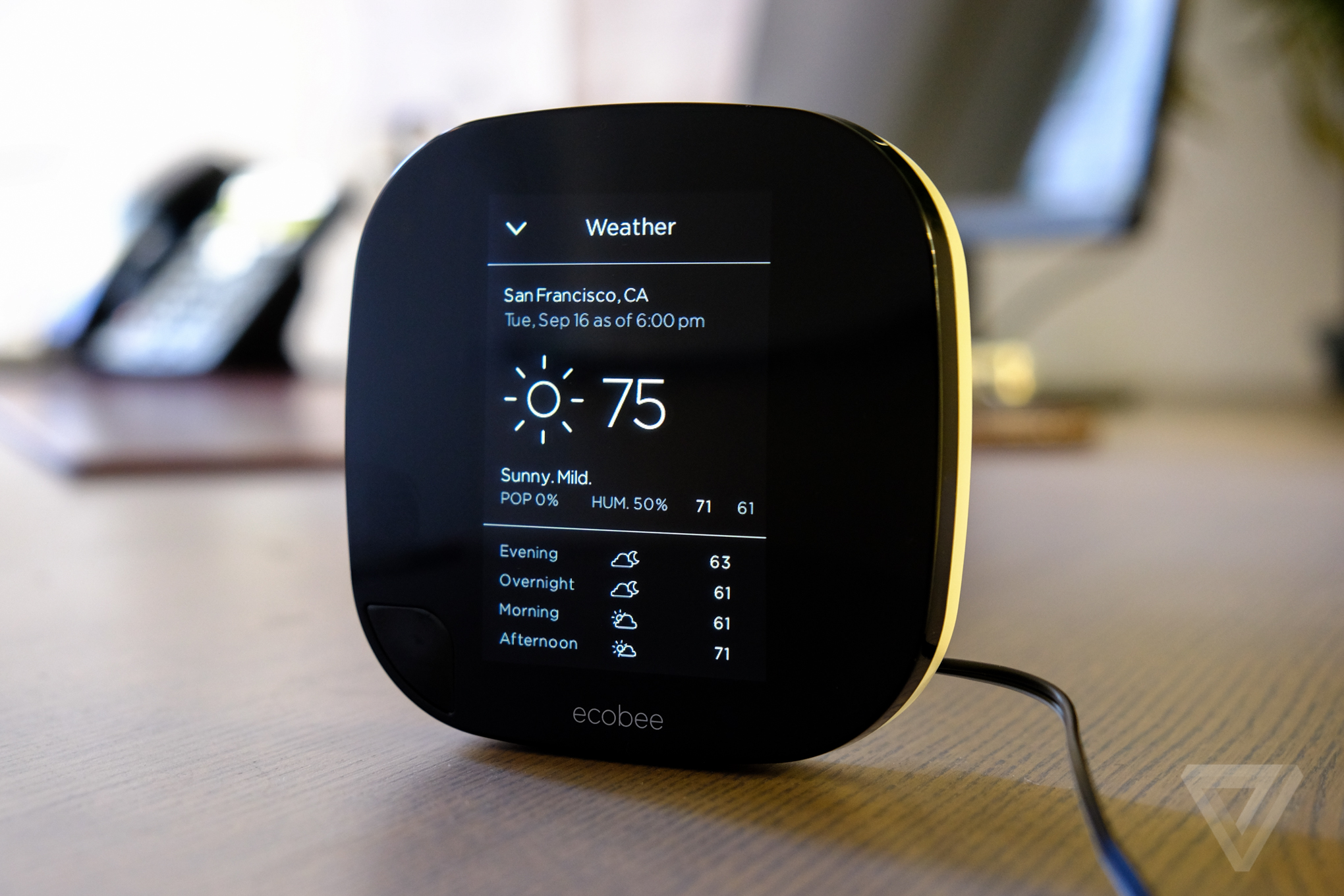 The Ecobee 3's weather display (plugged in and running on a demo mode).

Beyond the redesign, the Ecobee 3's big new feature is that it integrates tiny companion sensors that you can put in every room of your house. Each one tracks temperature and motion, so that the system can adjust for what room you're in, instead of simply sensing where the thermostat is installed. One of these sensors is built right into the unit, and you get another in the box that's powered by batteries, and can be placed on any flat surface, or mounted onto walls. The system works with up to 32 sensors, in case you have a house like Bill Gates. Lombard says this sort of automatic, targeted adjustment is the top thing people have asked for over the years, and results in a better reading of the temperature where people are versus where they drilled something into the wall.

"For a lot of people, that's like their thermostat in their dining room," Lombard says. That would be fine if people spent most of their time there, but in reality, they don't. "Being able to put a sensor into a room that you actually use, and your ability to detect whether people are home or not and turn back your temperature goes up significantly." That kind of setup is also easier than requiring everyone in your family to run apps on their phones that are tracking where they are, just to help the system out, Lombard argues. 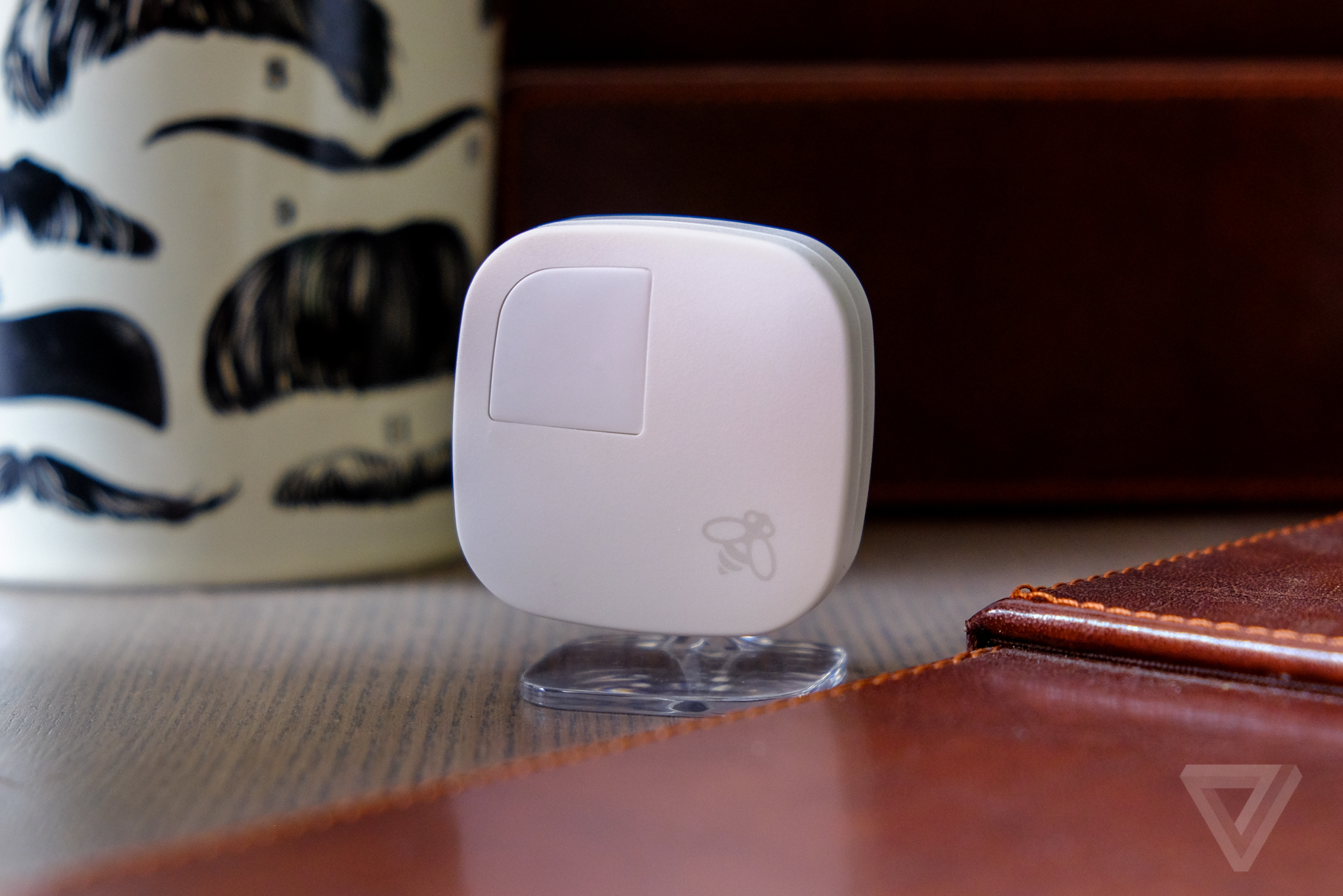 The new model also promises an installation that consumers can do themselves. Where previous iterations relied heavily on professional HVAC installers, Lombard says the company wanted this to be something ordinary people could take out of the box and get up and running in 45 minutes or less. "We tried to go through every step, and determine every time where someone might have gotten confused," Lombard says.

The goal is for people to install it on their own

To aid in that, Ecobee made two changes to keep people from getting tripped up: one is detecting your wiring and automatically configuring its software settings accordingly; the other is including power extender hardware, so that it can be plugged into the furnace in homes where the existing wiring doesn't deliver enough juice. The company used to charge for this part as a $25 add-on, but Lombard says that it was worth adding out of the box for people who didn't have the ideal wiring setup.

As for how all this will save on bills, Lombard says it's all about scheduling, and touts Ecobee's technology as the best at doing this. Citing figures from the US Environmental Protection Agency, he says that 80 percent of programmable thermostats go unprogrammed. By comparison, he says, the Ecobee 3 comes with a preprogrammed schedule that it adjusts based on information it gathers from its occupancy sensors and your local weather forecast. The company also gets pricing from local utility companies, and will alert people when they can make adjustments to save money. Together, these things add up to what Ecobee estimates will be a 23 percent annual savings over typical programmable thermostats.

And that brings us back to the solar panels. Despite his own lofty investment, Lombard insists that buying one of these thermostats could basically provide as much in the way of energy savings as his entire system.

"In all fairness, Toronto is probably not the best place to put solar panels."