Apple will release iOS 8 for download later today, and you won't be waiting long for the first third-party keyboards to hit the App Store. In fact, there won't be any waiting at all. Swype will be available for 99 cents starting Wednesday, kicking off a competition between developers and Apple's own, new QuickType keyboard to decide who's come up with the best method for inputting text on your iPhone or iPad. Of course, with Swype and competitor SwiftKey — also launching alongside iOS 8 today for an even lower free — you no longer have to tap individual letters. Both keyboards have become hugely popular on Android thanks to their gesture-based input, which lets users put a finger down on one letter and keep sliding or tracing to others in a word without lifting that finger from the screen. Nuance, which owns Swype, is also very proud of its next-word prediction technology.

More features are on the way in upcoming updates

If you're familiar with how that works on Android, it's really the same story here. And Swype gets smarter as you use it more and more. If it's not picking up on a certain word, you can quickly add it to the keyboard's custom dictionary. Definitely do this if "selfie" is in your vocabulary, otherwise you'll see "sulfur" pop up every single time. At launch, Swype won't be connecting to the internet to download new words or to sync your dictionary across devices; all of its "learning" is local to whatever iPhone or iPad you're using. SwiftKey definitely has an advantage there; it's got network connectivity on day one and can pull down what you've already taught the Android app from the cloud. Swype will get there before long with upcoming updates, and the team also plans to add support for more languages. For now, the aforementioned personal dictionary and keyboard themes are your main "options" to explore. The "light" theme pictured below looks way better and more at home on iOS, though you'll have to memorize shortcuts with this look since they're not displayed right on the keys. 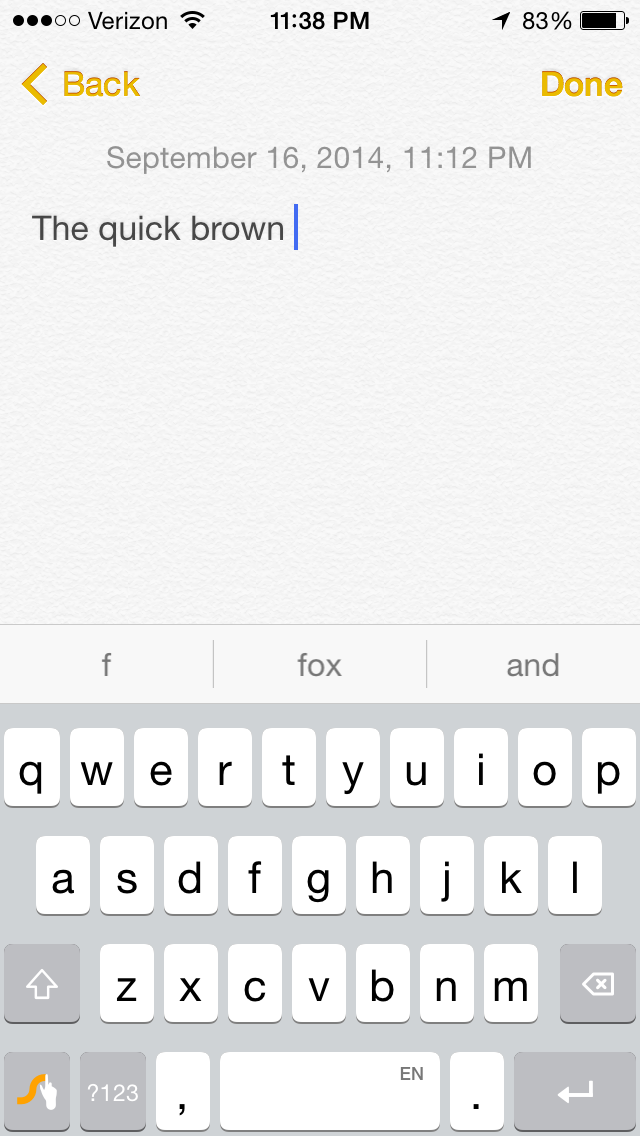 How does installing third-party keyboards on iOS 8 work? You download them like any other app. Once Swype is installed, tapping on the app icon will open a how-to tutorial that guides you through the setup process. All it takes is heading into your keyboard preferences and adding Swype. From there, you just hold down the globe key on Apple's keyboard, select Swype, and you're done. Third-party keyboards don't work everywhere: most notably, Apple's keyboard always comes up whenever you're entering a password. Presumably that's Apple being extra cautious about security, and it's not like you'd be dragging your finger around the screen to input a password anyway, so no big loss. But it shows up pretty much everywhere else you'd expect.

Is Swype truly faster than Apple's QuickType keyboard? I didn't notice any striking improvements during my tests. But some people swear by doing things this way. And I regularly find myself dragging my finger around the screen on Android (though that's with Google's keyboard, which I really hope somehow makes the trip to iOS.) It somehow just feels more efficient at times, even if the gains in speed aren't obvious. Starting today, iOS users can decide if these third-party keyboards are worthy of the hype.