When we let machines be a part of our lives, sometimes wonderful things happen. Take the camera, for instance. You put it between yourself and something in real life, and it captures the moment forever. In many ways, keyboards are the same. They're our terminal to experiencing the the digital world, and have managed to stick with us despite the best (and worst) efforts of voice tools like Siri.

But let's cut to the chase: Apple has a new feature for the keyboard in iOS called QuickType, and it's kind of crazy. It looks at what you're writing and suggests the next word, so you can simply tap it. This saves keystrokes, time, and perhaps sanity. When they discover 20 years from now that smartphones have given everybody debilitating carpal tunnel, autocompletionists will have the last laugh.

Apple is far from the first company to offer this. In fact, it's basically the last. But this is something that's coming out of the box to everyone who uses iOS 8, which meant I absolutely needed to test its capabilities. Was this another Siri? Would it know where I wanted to eat dinner, or understand basic pop culture references? Would it add sass to my otherwise vanilla emails? Those questions would have to wait for another day. First, I just wanted to go down the weird rabbit hole of setting off with one word and seeing where we could go with it. Or more importantly, where Apple wanted me to go with it. Here's what happened.

Let's start it off with a softball word, like "terrorism." Keep in mind that I'm basically following a flow of words that might work with the word, or words in front of it. The only word that's being typed is the first, while I follow the suggestions on the top bar:

We went from an important sounding nightly news report to a status update on my big day of pampering. Admittedly, I didn't give it much work work on. Let's try something less innocuous, like "tangerine."

And things just got real dark. By now it should be clear that there are greater powers at work here than the human brain, though I could probably send this to a friend and they'd still think I was human. We need to go deeper.

Hang on though. Up until now, I've been typing these in Messages, which makes use of what Apple refers to as a "casual style" versus the "formal language," you'd get writing an email. That means the things you see like the mentions of getting my nails done, hitting the gym, or day drinking are probably limited to there, right? Let's try "oranges," but in email this time.

Success! That's still a little odd, but also more business-like, I guess. For what it's worth, you'll get the same results while texting. Let's try "monsters" in a generic email.

With iPhone 6 and 6 Plus preorders pushed back, Apple might not be in the wrong here. But any human would look at this and think I'd gone insane. Let's do one more try to see if this system really understands me as a human with a frequently used word like "dynamite."

The big takeaway here is that this system is absolutely lousy at offering you entire sentences, versus completing words in common phrases. It's just not designed to help write everything for you, or even close to it. It's supposed to offer up short suggestions for you to respond with when you get texts or emails, and it does a much better job at that.

Case in point, someone asking you a simple question (I'm the blue bubble): 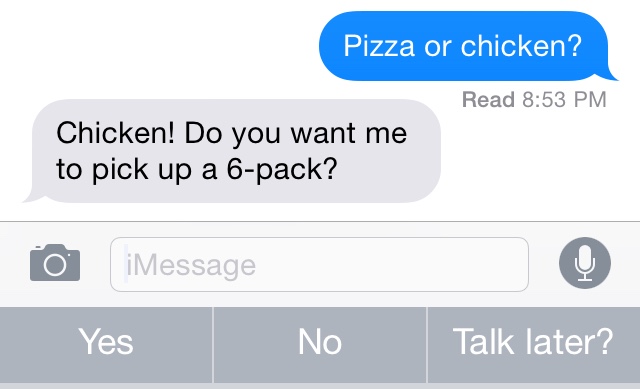 Or maybe one that's a little more complex: 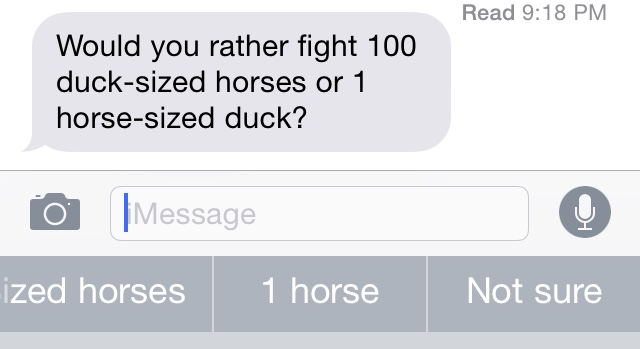 The bigger divide, and one that's not fully realized here, is keeping the vocabulary up to date with pop culture references. That means that the first time you start typing out a band name or new TV show, your phone already knows what you're talking about. Third-party keyboard companies have chased after that elusive goal for years. That's the future, and it's not here quite yet. In the meantime, enjoy the chaos.