7 keyboards for iOS 8 you can try right now

Plus 7 more that are coming soon

Share All sharing options for: 7 keyboards for iOS 8 you can try right now

When it comes to typing on your smartphones and tablets, iOS users are about to see how the other half lives. With the launch of iOS 8 this morning, you can now install a third-party keyboard on your iPhone or iPad. The system keyboard still works just fine, and is getting a nice upgrade for iOS 8: for the first time, it’s offering predictive text. But other developers makers have been in the game much longer, refining their predictions through years of iterations. And keyboards are already turning into a design playground, with creative user interfaces and highly customizable graphics. Here’s a guide to trying out an iOS keyboard alternative right now.

How do you install & change keyboards?

First you’ll need to download the keyboard from the App Store, then enable it in your device’s Settings app. Go to: Settings > General > Keyboard > Keyboards > Add New Keyboard. You’ll see the one you just downloaded from a new list called "Third-party keyboards." Once you’re typing, you can jump between the different keyboards by tapping the globe icon, or picking from a list by holding down on it. On Apple’s keyboard, the little globe is always in the same place in the bottom left, though some third-party keyboards have made it a little more difficult to get to. That includes Swype, which requires holding down its icon in the bottom left, and sliding up to the globe from a small settings menu. The same goes for Fleksy’s iOS keyboard, which requires a long press on a button that doubles as the toggle to switch to the numbers keyboard.

Keyboards you can try right now

Fleksy’s big feature is using gestures to replace some commonly used keyboard buttons in the name of saving space and time. You can swipe to the left to delete instead of tapping a button, or swipe right to add a space. The iOS version has a toggle for a minimal mode that gets rid of everything except for the letters once you’ve learned the gestures for things like capitalization and adding spaces. You can also adjust its size, color scheme, and whether you actually want to use the shortcuts, as well as have it learn your writing style from accessing your Facebook posts, Gmail messages, or Tweets — things that you opt into separately. Fleksy is launching with six themes, and selling another six "premium" themes that can be unlocked for 99 cents.

This keyboard focuses on making it easier to fill out the forms we usually struggle with on mobile devices. Kuaiboard stores your billing info, signatures, and addresses in an effort to save you time. You can program all this ahead of time, but some things like location, are generated for you on the fly.

Minuum is one of the craziest alternate keyboards you can use on the iPhone, at least so far. You can drag your finger up or down on the very top of the keyboard to change its size, right down to a small ribbon that takes up far less space than Apple’s (or any other keyboard on this list). The idea is that its autocorrect will try to figure out what you were attempting to type, and fill it in for you. There’s also a line of suggestions that fill in along the top so you can save a few keystrokes. Is this worth not really being able to see what you’re doing? That is debatable.

SwiftKey’s actually been on iOS since January, but you could only use it in a single app designed for creating notes on Evernote. The big thing it had back then was predictive typing, which Apple’s baked into its own keyboard in iOS 8. The company’s new version adds things like SwiftKey Flow, which lets you slide your finger across multiple keys to spell out words; a white and dark theme; and SwiftKey cloud, which will save your custom words, phrases, and writing style between devices.

Swype came from the creator of T9, and lets you slide your finger from letter to letter to compose entire words. On iOS, users get the same thing, as well as word suggestions for partially typed words and phrases. Swype is launching with five themes, a personal dictionary that learns words, and the same gestures for punctuation and symbols you’ll find on Android.

Smile Software’s Textexpander is a popular Mac utility for storing your most frequently used bits of text and inserting them quickly by typing a shortcut. It made an iOS app, too, but it relied on other developers to integrate it into their own apps. With iOS 8, users finally have the system-wide text expansion they’ve been asking for. We use it for canned responses to emails, email signatures, and always turning two hyphens into an em dash, among other things. Your snippets sync up over Dropbox too, so you don’t have to relearn or re enter anything you’ve done on the desktop app. 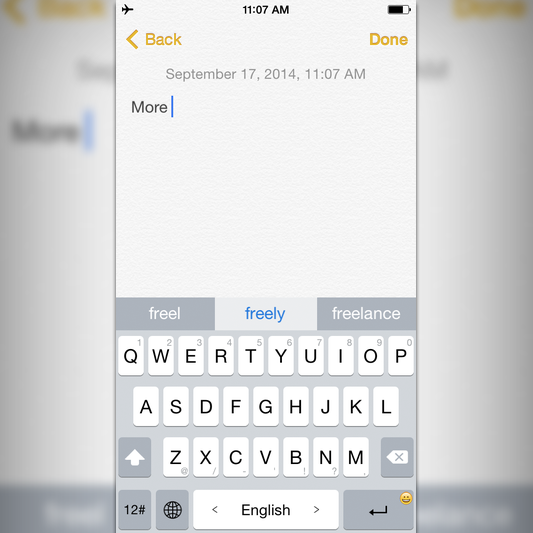 TouchPal (Free)
TouchPal’s keyboard works with taps or sliding input, so you can spell out words without taking your finger off the screen. Unlike many other keyboards, TouchPal uses gestures to let you type secondary numbers and punctuation from individual keys without a long press or switching between keyboards. There are also colored themes, and a built-in emoji keyboard that lets you scroll through emoji instead of paging through them like Apple does.

Keyboards on the way

Some of these are still in development or have been submitted to Apple, meaning you'll see them soon.

Adaptxt
Adaptxt promises a lot of things, from letting you type without lifting your finger (a la Swype and Swiftkey), to changing the look of your keyboard. The main feature though is changing its word suggestions based on location and situation, doing some of the same things as Apple for discerning whether you’re texting versus writing emails. The location awareness also promises to bring up words for things and places around you, which is a novel take.

GifmojiGifmoji combines an animated GIF keyboard and animated emoji (as GIFs) in one. Not to be outdone, there are even text-based emoji, meaning you can lay down a ¯\_(ツ)_/¯ at the drop of a hat.

Emojiyo Why use letters and words when you can use emoji? While nearly all the keyboards on this list either incorporate Apple's emoji dictionary in one form or another, Emojiyo (via QZ) has things like search, and a way to combine several emoji together into phrases that can be saved. If only this had been around for that couple that only talked to one another with emoji for a month.

Ginger aims to be as much a writing coach as it is a keyboard replacement, offering a dictionary, translator, grammar checker, and something called a "sentence rephraser" that will "spice up your text" with new idioms and phrases. For those new to English, a personal trainer feature will even help you learn the language.

What if you replaced letters with animated gifs? That is Popkey’s entire purpose. It’s a collection of thousands of GIFs that you can browse and search through, that get inserted into text, emails, or whatever app you’re in. Does that mean you type out work emails with such a thing? Yes. This is basically an animated GIF app that now lives in every other app. The keyboard is all done, but waiting on Apple’s review before you can install it. 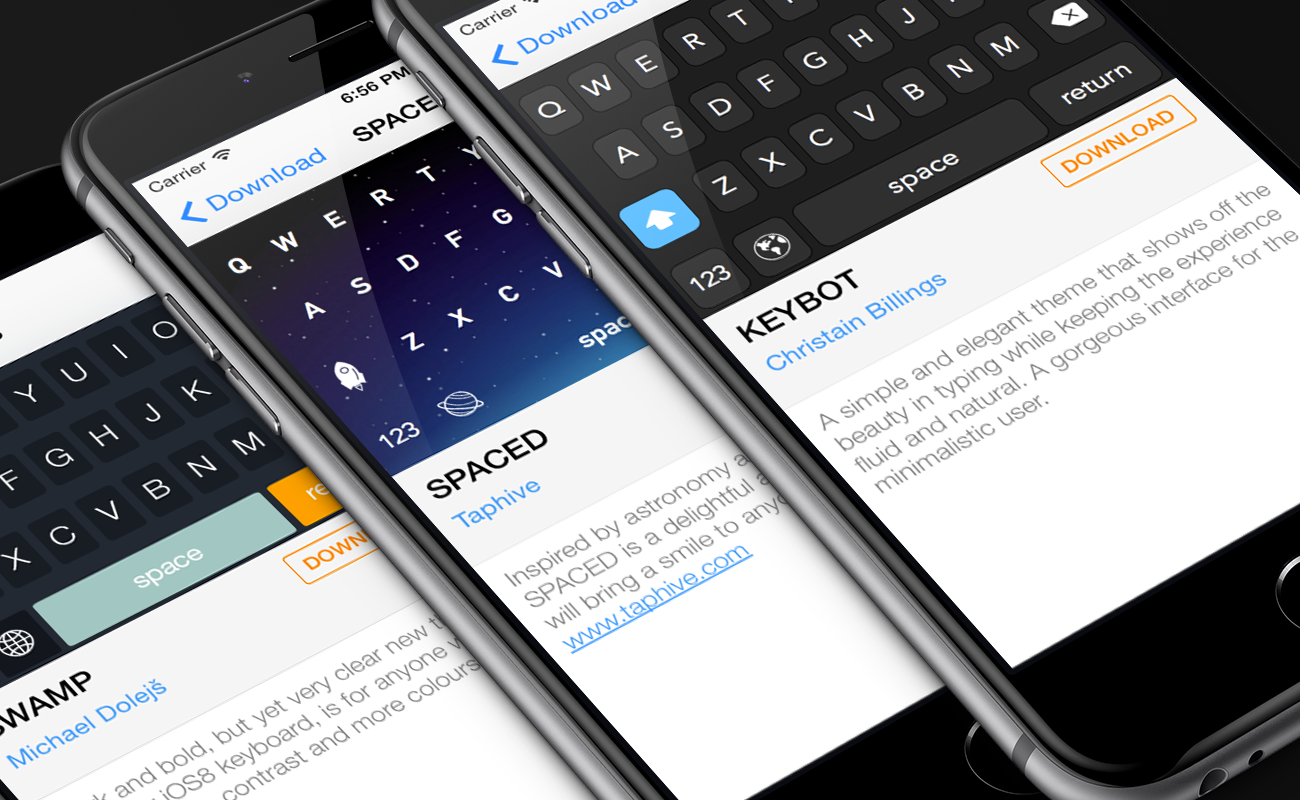 Themeboard
Like its name suggests, Themeboard is heavy on the look and feel of the keyboard over any special features that would augment what you get with Apple’s own. Its creators are making a platform for other designers to come in with their own creations and sell them to people from within the keyboard’s companion app. Think of it like Vscocam and its filter store, but for iOS keyboards. Co-founder and designer Asem Hassan tells The Verge that he expects some designers to give their themes away for free, while using Themeboard as a place to have their other work discovered. 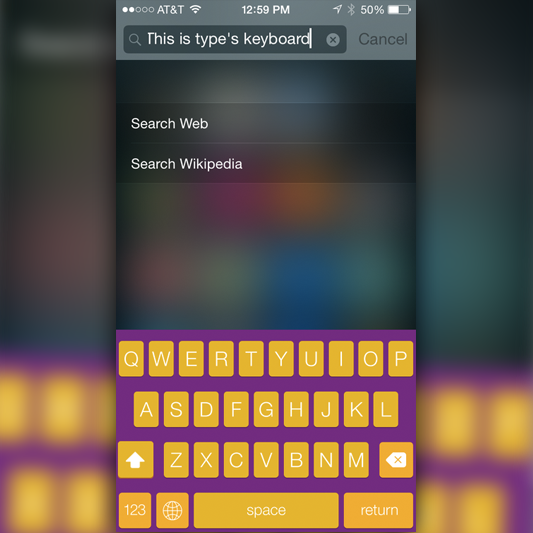 Type
Type’s goal is to let you pick every possible color for your keyboard, from the background to the keys. A version the company is testing right now lets you adjust those two things, though in the future, the developer wants to let you add and remove keys, and plans to add word suggestions and autocorrect features.

iOS 8: the biggest update since the App Store