Inside the building where Apple tortures the iPhone 6

This is where iPhones never want to go

A few blocks away from Apple's bustling campus in Cupertino is a rather nondescript building. Inside is absolutely the last place on earth you'd want to be if you were an iPhone. It's here where Apple subjects its newest models to the kinds of things they might run into in the real world: drops, pressure, twisting, tapping. Basically all the things that could turn your shiny gadget into a small pile of metal and glass.

“We’ve designed the product to be incredibly reliable throughout all your real world use," Apple's senior vice president of worldwide marketing Phil Schiller told me. "And in designing that we then have to validate heavily, and see how does it live up to real world use, and what are the forces and pressures on it, and how do you measure and prove that you’ve delivered on a specification.”

In case you hadn't guessed, Apple doesn't often show this facility to outsiders. The only reason I'm here today is because Apple's latest iPhone, the iPhone 6, bends. At least for some people. The real question up until now is just how many people that's happening to, and whether that would happen during normal use in a human pocket.

Apple's answer today, both in a statement and now in these testing facilities, is that the iPhone 6 is tough. It's made with steel / titanium inserts designed to reinforce potential stress points, a special blend of aluminum Apple formulated itself, and ion-strengthened glass. But more important, Apple says, is that the iPhone 6 has been put through hundreds of tests, as well as tested in the pockets of thousands of Apple employees before consumers ever get their hands on it.

What's the exact number of devices Apple went through before it was done? About 15,000 for each the iPhone 6 and iPhone 6 Plus, according to the company. "The iPhone 6 and the iPhone 6 Plus are the most tested," Dan Riccio, Apple's senior vice president of hardware engineering, told us today. "As we add more and more features, we have to find out a way to break them before customers do." 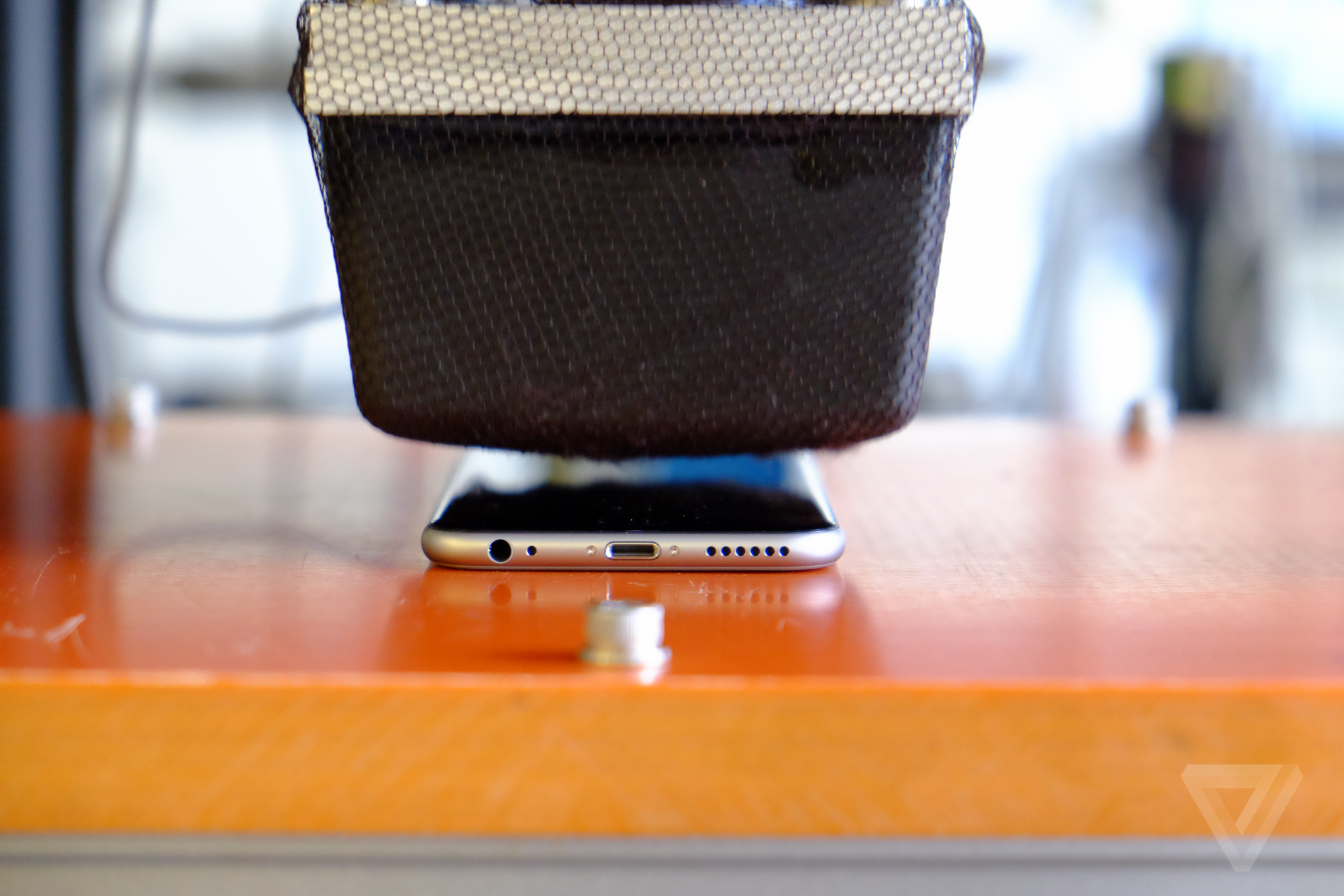 Some of the testing I saw today was what can be considered torture tests, but it also puts the phones through the regular stresses that they might undergo in the wild. That includes being sat on in pockets — and being bent. The idea is to give the phones a lifetime of testing, but without spending a lifetime doing it. The machines that do this methodically set various pads and pressures on the phones over and over again with only a small hiss of air and a dull "thunk" noise. I saw a similar setup in Microsoft's headquarters in Redmond when the company was introducing the Xbox One, with controllers being tapped maniacally by machines.

"If you use enough force to bend an iPhone, or any phone, it's going to deform."

Apple was mum on how much the new iPhones can actually take, something it considers a trade secret. It pointed only to 25 kilograms, the amount of weight Apple puts on top of the iPhone's screen to test it for the bends. Next to a machine that does this thousands of times is a small set of weights: this isn't actually the full amount of weight the phone can take Riccio says, just what it can handle while being capable of "bouncing back" to its original form. Even so, there are limits.

"The bottom line is that if you use enough force to bend an iPhone, or any phone, it's going to deform," Riccio says.

Along with that three-point test, there's what's known as a "sit test," which simulates the stresses iPhones undergo while in pockets. And not just any pockets, either. There's a test for when people sit on a soft surface, when the iPhone is sat on, as well as what Apple considers the "worst-case scenario," which is when it goes into the rear pocket of skinny jeans and sits on a hard surface — at an angle. 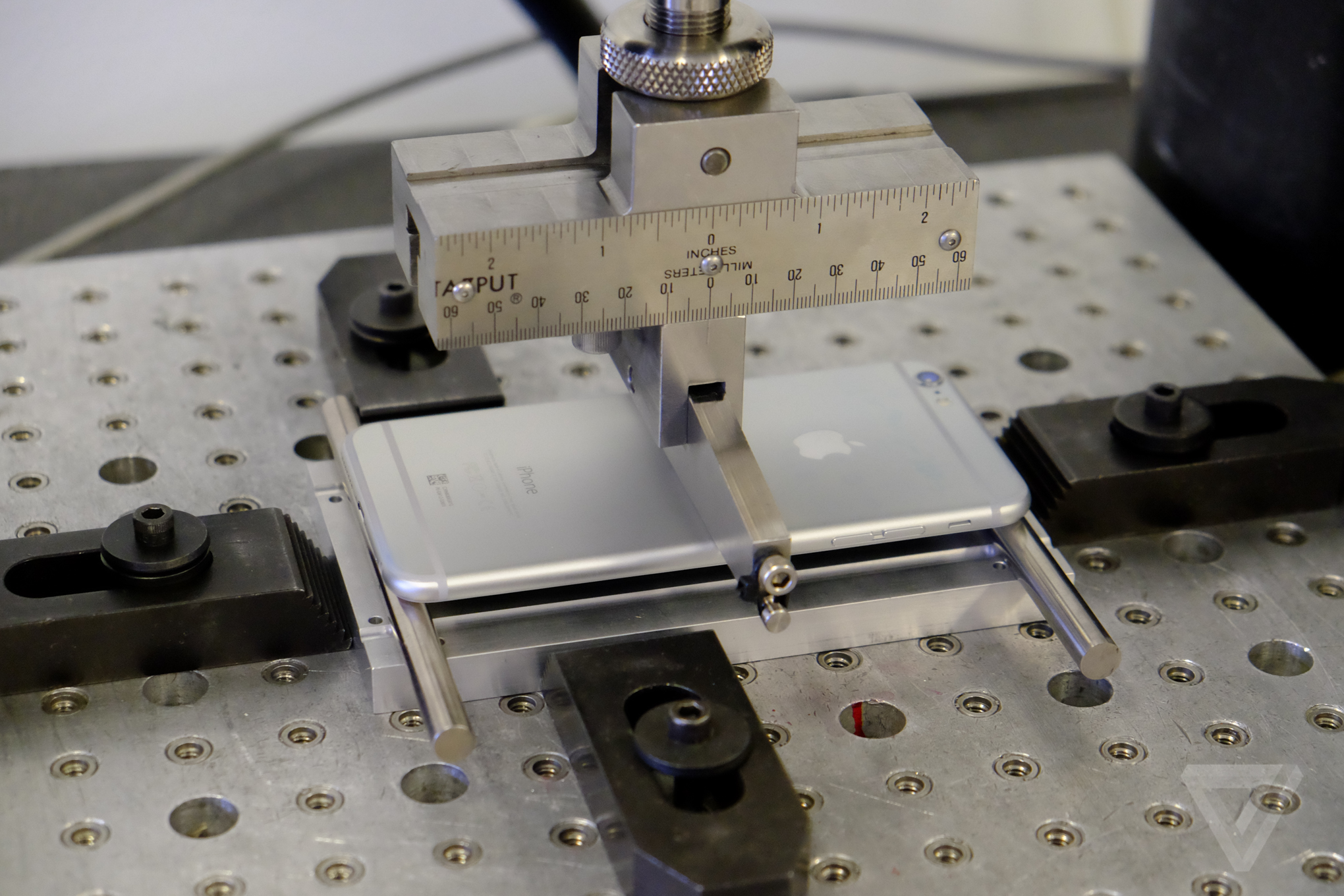 One other test I was shown tested torsion, or when the phone is twisted (see the top image). Apple showed us an iPhone 6 and 6 Plus, along with a MacBook Air that was being twisted from one end to the other. This will go on thousands of times, Riccio said, with the company keeping track for failure.

These are just a small portion of the facilities that Apple uses, Riccio says. The company does some here, but also at a much larger scale in China where its products go through some of the last steps before entering full-scale production.

The last time Apple let the media this deep into the fold was in 2010 for the iPhone 4. Shortly after its release, users discovered that gripping it tightly reduced the signal strength. After holding a press conference, Apple took a small group of press to visit the "black lab" where it tests its cell phone radios in anechoic chambers.

This time around, there are no free cases for people, or even a press conference. Apple's just telling people with a phone that's bent to take it into one of its stores to have it looked at.

"As we expected, it’s extremely rare to happen in real world use," Apple's senior vice president of worldwide marketing Phil Schiller told us. "In this case, as in many things, we tell customers that if you think something's occurred that shouldn't have with your device, go to AppleCare, go to the Genius Bar, and let them take a look at it. And we'll see if your product is having an experience it shouldn't have, and is covered under warranty."