I'm stuck between a group of Australians and a gigantic death worm. The worm is hundreds of feet long, covered in huge spines, and crushes buildings with a single swish of its tentacled mouth, but the Australians have been really annoying.

I decide to go with the worm. 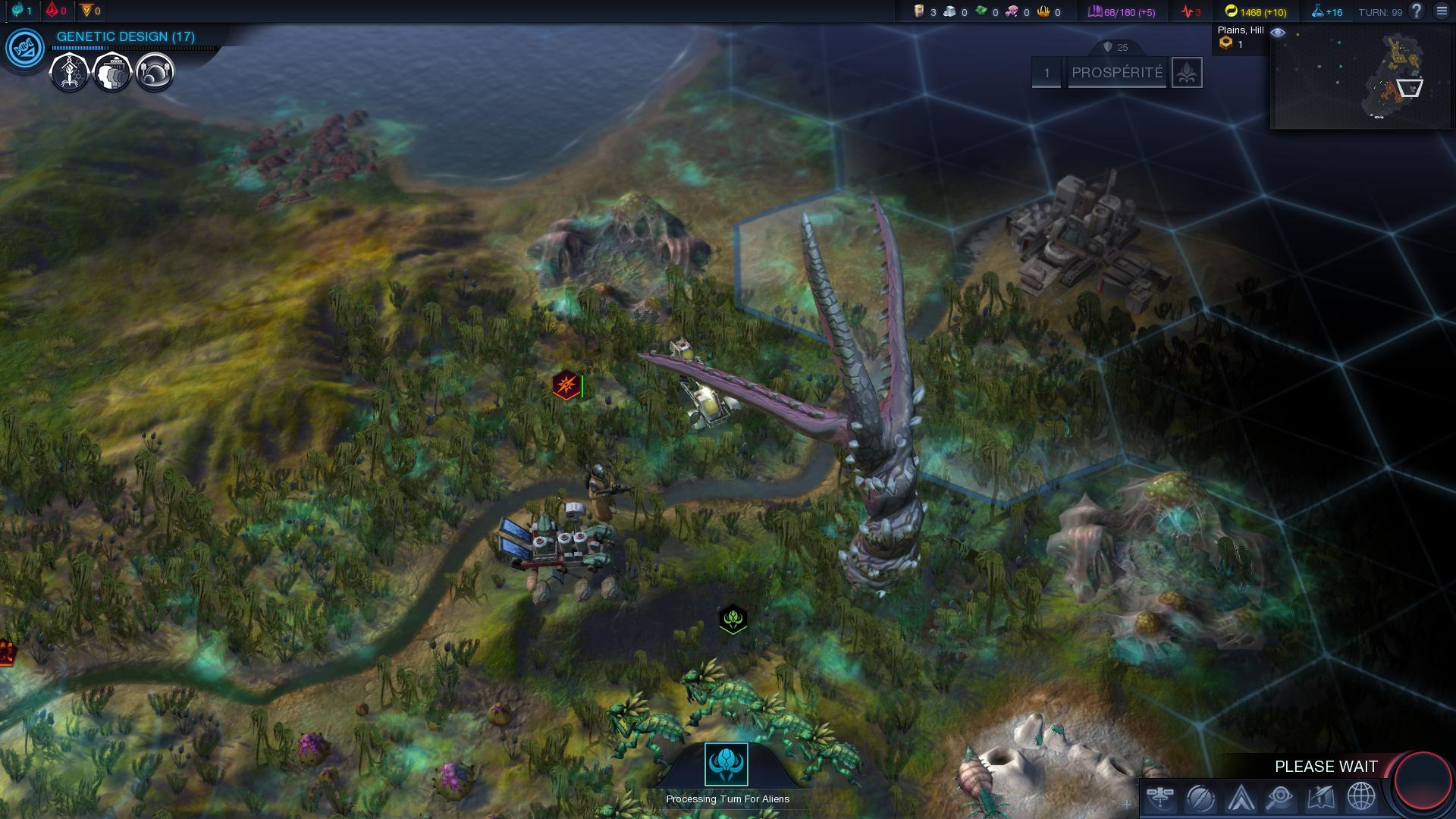 The alien world marks humanity's first attempt at finding a new home after messing up our homeworld, but this isn't some harmonious sci-fi future. Beyond Earth lets you play as one of eight rival factions colonizing the planet, and those factions can still quickly develop petty quarrels with each other even hundreds of light years from Earth.

Cities in Civilization: Beyond Earth start off as spaceships. They drop from the sky, thrusters slowing their descent, before unfurling into a prefabricated city on the alien planet. The Australians — technically Polystralia in the 29th century in which the game is set — plopped their city-ship down just north of my own about ten turns into the game. They step out of their craft, and blinking against the new sunlight, before immediately demanding I stop settling lands near their base.

There's real choice in how you play your colony

Settling lands near your base? You just slammed an entire city down spitting distance from my base. I use the game's diplomacy options to reject the Polystralian leader's request and promise him that his tone will come back to bite him later, but for now I have more important concerns: the death worm is slamming through the hexagonal grid spaces around my southernmost city. Those spaces are filled with food farms and power generators, things I built soon after I founded the settlement using one of Beyond Earth's trundling colony vehicles. It's still small, but it's already helped boost my production — I need to get rid of the Dune-esque monster tearing it apart before my economy is crippled and the evil Australians take their chance to invade. 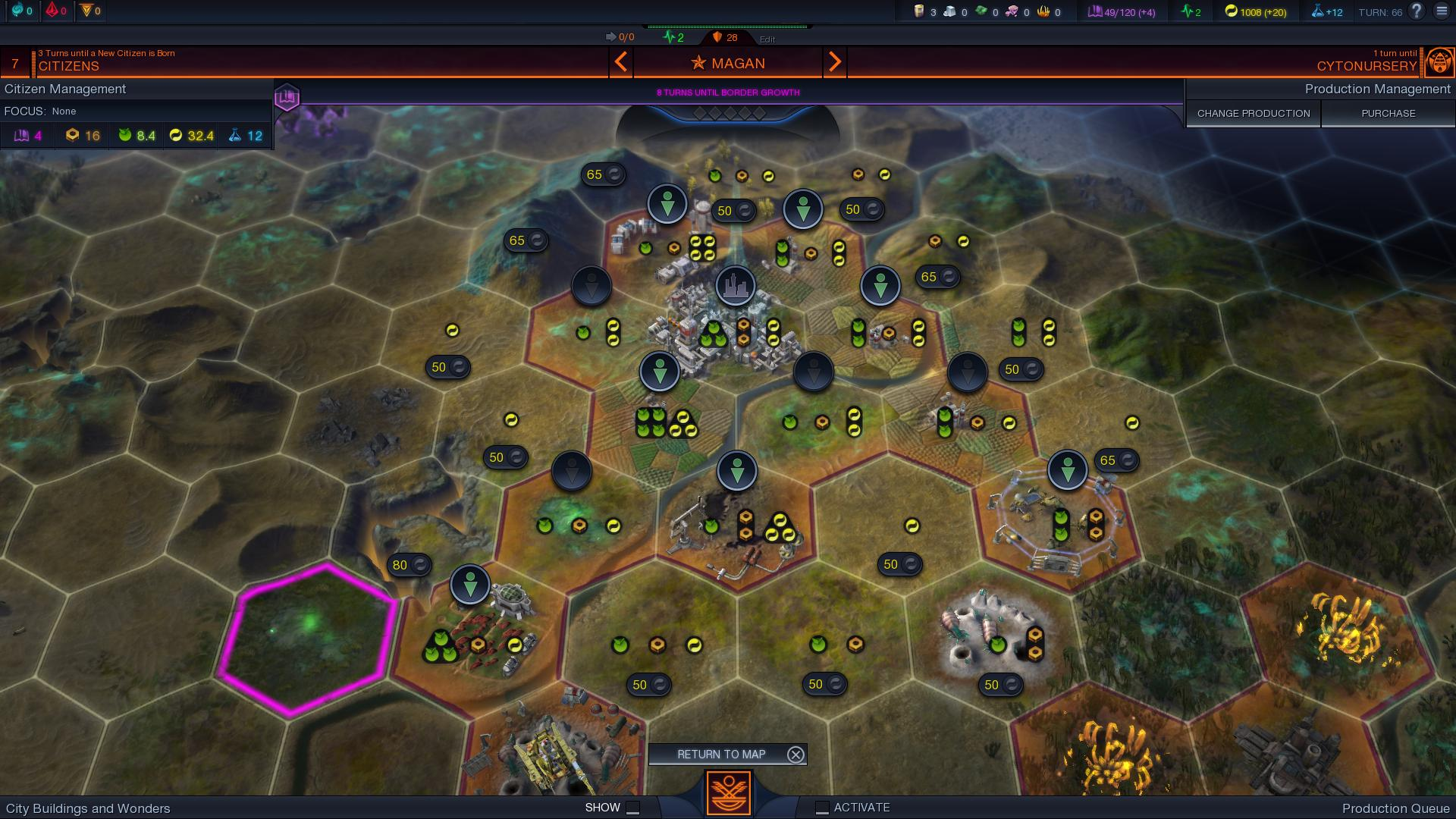 I immediately cancel my building projects — two vital food silos to keep my growing populace fed — and start training two squads of space marines. I know my economy's going to take a hit by focusing on military might this early in the game, but I'm not yet sure how it'll shake out. Beyond Earth has a large number of economic variables: I can mine minerals, gas, and weird goo from the alien world, but only if I've researched the ability to do so on a sprawling research tree. To research, I need science points, which themselves are accrued by dedicated learning centers I can construct in my cities. I can buy buildings and units outright, but only if I have the "energy," a resource generated by specific buildings and represented by a yellow icon. I can also increase my production, a separate measure that isn't displayed on the main UI, but squirrelled away in each city's own menu. The higher the production, the fewer turns it takes for me to finish my construction projects in that city.

It's a confusing array of numbers and icons that will scare Civilization first-timers off come the game's launch. It's even complex for series veterans: I've found myself bleary-eyed in front of a Civilization game at 5 AM more times than I'd like to count, but my early attempts to decipher how resources interacted with each other were thwarted by an interface and help menu so dense and dull I found myself involuntarily alt-tabbing half-way through a unit description. That could change — my games were played on a preview version of the game provided by Firaxis — but I soon found that the presentation didn't matter because the underlying economics were both solid, and satisfying.

The sheer number of icons and resources will scare some players

It feels like there's genuine choice in how you play your colony. Earlier Civilization games have promised specialization, but ended up demanding that most players are generalists, perhaps because they're predominantly set during real human history. You couldn't have cavemen inventing nanotechnology and ice cream before they worked out the printing press. But Beyond Earth's huge tech tree — more a tech forest in size — has so many options that you'll have to specialize or settle in for a seventy-hour game. Beyond Earth codifies that specialization. You can choose to follow one of three "Affinities" that change the abilities of your cities and appearance of your armies. The path of "Purity" yields soldiers that look like they stepped out of a Michael Bay movie, "Supremacy" gives terrifying cyborg future-soldiers, and "Harmony" aspirants absorb the planet's alien influence to make half-human, half-alien hybrids.

"Supremacy" is the most tempting for me, and as I build more troops, I choose a research path that takes me closer to a glorious future where my colonists' blood is filled with tiny robots. Ideally, if they're going to get rid of this worm for me, they'll also be able to grow new limbs and feel no pain. With the building-sized beast reappearing on the map, I send a small force down to engage it. Already, I'm picturing a scene like the one at the end of Starship Troopers, a glorious battle in which I push the bug back into its hole, and celebrate my mastery over this alien world.

It goes more like the scene from the beginning of Starship Troopers. The one with all the dying. My squads are destroyed in three short turns, the worm smushing the soldiers into the ground with its horrible mouthparts. I pull a fourth force back before the worm can crush them too, but as they flee, they're harried by smaller aliens, green wasp-like things and wolf-sized bugs with sharp pincers. Unlike the computer-controlled barbarian forces in other Civilization games, Beyond Earth's aliens remain dangerous for hundreds of turns.

I barely get my last remaining force back to my capital city before the worm reappears a few hexagons away and wrecks a power generator. I sigh and contemplate giving in for the night, but I repeat the Civilization series mantra — "just one more turn" — and resolve to find a way out of my situation. I'm convinced that Beyond Earth has a sense of agility and chaos missing from other Civilization games. With a bit of ingenuity, I think I can save my colony.

I click "next turn" and look for something else to repel the beast. I know I can do it.

Then the Australians invade.

Civilization: Beyond Earth is available on Windows, OS X, and Linux on October 24.