Gabe suffered from terrible seizures known as "mind erasers." But doctors used a 3D printed brain to pioneer a medical breakthrough and give him a normal life

Come along with The Verge for the second season of Detours. We’ve traveled across the country to find the people, groups, and companies that are solving America’s problems in new and unconventional ways.

On a Tuesday last summer, Erin Mandeville was at a CVS buying medicine for her five-month-old baby, Gabriel. Close to 4PM, she noticed her infant’s eyes roll back in quick succession. It was the first of Gabriel’s many episodes of infantile spasms that would follow.

Spasms or epileptic seizures can be catastrophic for young children. Doctors at Boston Children’s Hospital tried every route and medicine to help Gabriel as his seizures progressed aggressively.

"He was missing huge milestones in his childhood," said Mandeville.

Doctors eventually suggested a hemispherectomy, a complicated operation that disconnects the healthy half of the brain from the one causing seizures. "I didn’t know how invasive it would be," Gabriel’s mother said. "But, if it was going to make him have a better life, it was an easy choice to make."

Mandeville’s choice was made easier knowing that Gabriel would be the first infant whose brain would be replicated by a 3D printer for a practice run prior to the operation. 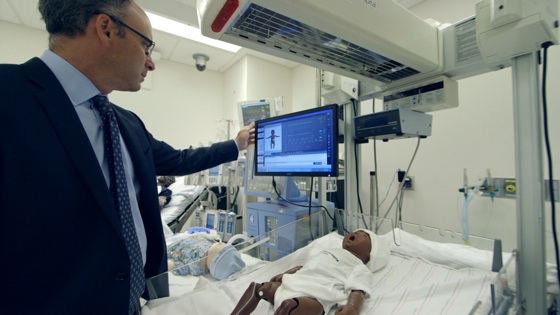 "This is a printed version that the surgeon can hold, cut, manipulate, and look for things."

A hemispherectomy is "one of the most challenging operations in pediatric epilepsy surgery," says Dr. Joseph Madsen, director of the epilepsy program at Boston Children’s. A dress rehearsal is beneficial even for the most highly experienced surgeons. "This is a printed version that the surgeon can hold, cut, manipulate, and look for things," he says, holding Gabriel’s printed brain in his hand. For surgeons-in-training, the simulation is a blessing. "No one wants to be the first person to get a hemispherectomy from a surgeon, ever," he adds.

The 3D print of Gabriel’s brain was developed by the Simulator Program at the hospital. The model is printed in soft plastic with a precision of 16 microns per layer; blood vessels are set in contrast color for easier navigation. Gabriel’s parents were privy to the process and anticipated complications. Gabriel’s subsequent surgery earlier this year took close to 10 hours, and went according to plan.

"Surgical preparation via simulation allows surgeons to hit the ground a lot faster," says Dr. Peter Weinstock, director of the Simulator Program. "We can’t be prepared for every possibility, but we can chop off a large number of complications."

Though medical simulations are nothing new, the Simulator Program surpasses conventional systems with next-generation mannequins and 3D printing. The team behind the program includes surgeons, specialists, radiologists, and engineers, and is currently gathering data to validate its implications on surgical times, anesthetic times, and patient safety.

"We can chop off a large number of complications."

Within a year of its inception, the project has developed close to 100 prints — 20 percent of those have made their way into operating rooms. Dr. Weinstock suggests that in the future, on-demand anatomy printing could make its way into emergency rooms to meet the needs of trauma cases.

"The technology is coming," he said. "The question is: how do we develop and make use of the technology that will have an immediate effect on how we take care of children?"

Gabriel, now 18 months, is seizure-free. Challenges can be expected. "But, kids’ brains are so resilient," his mother says. "He’s already re-wired himself. He’s starting to hit the milestones he missed — he wakes up smiling every day."

More from this stream Verge Detours