PayPal broke up with eBay so it could take on Apple

PayPal broke up with eBay so it could take on Apple

Not to mention Google, Visa, and the rest of a rapidly changing payments industry

News broke this morning that PayPal will spin off from eBay into a separate publicly traded company, ending a 12-year union between the online merchant and the payments processor. At the most basic level this creates two simpler, more focused companies — but the real impetus for an independent PayPal is more likely the rapidly maturing ecosystem of digital wallets and mobile payments, especially Apple Pay, which threatens to eat PayPal’s business from the inside out.

PayPal emerged as an early leader in the online payment space in the late 1990s by solving the nascent problem of fast, secure transactions on the web. More recently it — well, technically eBay—acquired Braintree, giving it a sizable foothold in the fast-growing world of mobile and in-app payments. And it has consistently been the most widely used service among consumers in the still-young market for digital wallets: a ComScore study from last year found that PayPal was the brand consumers preferred, with six times the usage of the second-place service, Google Wallet.

But PayPal’s stellar growth wasn’t reflected in eBay’s stock price, which has vastly underperformed its peers. That meant PayPal had fewer resources with which to compete. Activist investors like Carl Icahn have been advocating for a breakup, arguing that there was tremendous market value in PayPal that couldn’t be realized while it was inside eBay. For months his demands were rejected, and Icahn eventually backed down, but it seems that he planted a seed which, along with recent events, finally prompted eBay’s board to approve the split.

"The pace of change accelerated in the past six months."

eBay’s leadership acknowledged this morning that PayPal has to be more aggressive and agile as it digs in for the battle ahead. "The pace of change accelerated in the past six months," eBay CEO John Donahoe told the New York Times, citing the emergence of Apple Pay and Chinese e-commerce giant Alibaba as new competitive threats. Spinning off as a newly public company will likely give PayPal extra financial firepower in the form of stock that is expected to trade at a much higher price-to-earnings ratio than eBay’s current shares. PayPal will need that equity to make aggressive moves, including acquisitions and hires. 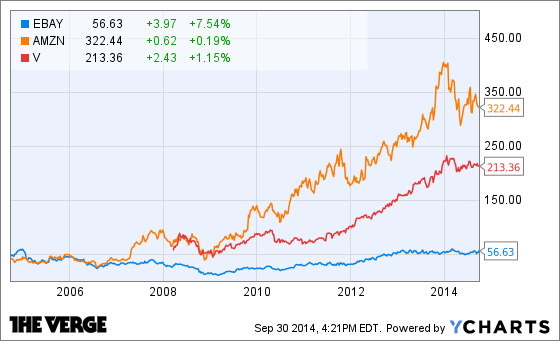 While the decision to breakup the two companies has been in discussion at eBay for a while, it’s hard to ignore the timing in relation to Apple Pay. The finance and tech sectors don’t necessarily have the best track record for working with one another, which makes Pay unique: it has the incumbent credit card companies like Visa, MasterCard, Discover and American Express working hand-in-glove with the biggest name in technology. The threat to PayPal is this: consumers who adopt Apple Pay to replace their physical wallet may also use it as their check-out option when making purchases inside apps. If Apple Pay performs well, it could also be extended to the web, threatening PayPal’s core business. (Apple listed six recommended payment partners developers could use with its payment service, but PayPal’s Braintree was not among them.)

The key for PayPal will be ensuring that it’s front and center across the web, mobile, and physical stores. That’s why it’s bringing in a veteran of the plastic world, Dan Schulman, formerly a senior executive at American Express. Before that, Schulman was a president at Sprint and the founding CEO of Virgin Mobile, experience that will be key to integrating the worlds of web, in-app, and in-store payments, crafting a single service consumers can use no matter where they’re spending money.

Where does this all leave eBay? Not in a great place. PayPal was the biggest driver of revenue growth at the company and a key part of making the transition from web to mobile. eBay will now have to battle Goliaths like Amazon and Alibaba on the strength of its e-commerce alone. The consolation prize for employees is that anyone holding eBay stock is likely to do well in the short term, as the impending PayPal spinoff will likely drive a significant bump in its price until the breakup is complete.