Today, Motorola announced its second-generation Moto X, the successor to the company’s rebooted flagship smartphone that was unveiled just over a year ago. Yes, the phone will simply be called Moto X again — not X+1, as some rumors had suggested — and it’ll be available for the same $499 unlocked as the original when it launches later in September (that's for 16GB; the 32GB version runs at a $50 premium). AT&T, among others, will be offering it starting at $99 on contract.

I’ve had a chance to spend some time with the new X this week, and something strange happened: I fell in love with it the moment I first held it.

I say that’s strange because we’ve reached a point where even mediocre smartphones are pretty wonderful. They just aren’t getting better in simple, obvious ways that normal humans can understand with the same relentless velocity that they used to. The mind-blowing outliers — the phones that make you instantly relieve yourself of several hundred dollars without a second thought — are becoming scarce and far between. Basically, it’s hard to fall in love with a phone when every phone is lovable.

And Motorola certainly needs a love-at-first-touch reaction: the first-generation Moto X, as terrific as it was, failed to make much of a dent in developed markets. (When the 75 million unit-per-quarter Samsung machine is the market you’re trying to dent, the challenge looms undeniably large.)

The metal frame is a huge deal
So what makes this phone so great? For starters, it looks really good. Under design guru Jim Wicks, Motorola’s attention to detail is rivaled in the smartphone industry only by HTC and Apple. The original Moto X’s magic trick was that it felt pretty small for its generous 4.7-inch display, and the new one pulls the same sleight of hand — but it does it with a 5.2-inch screen, a size that’s more in line with 2014 expectations. Much of that magic stems from Motorola’s now-trademark curved back, which leaves ample room for guts (battery, circuitry, so on) in the center but slopes to nearly nothing toward the left and right edges.

Speaking of the edges, they’re now made of metal, which is a huge deal. Some phones earn their "premium" stripes with fake metal; others use the real thing, but the first Moto X didn’t use any sort of metallic decoration at all, which hurt its image as a flagship device. The new X fixes that: the curved metal rim looks and feels fantastic. Engineering boss Iqbal Arshad is keen to note that the rim acts as an antenna, and the phone actively tracks how you’re holding it in order to adjust RF performance in real time. In other words: he promises Apple’s long-forgotten reception problems on the iPhone 4 won’t crop back up here. 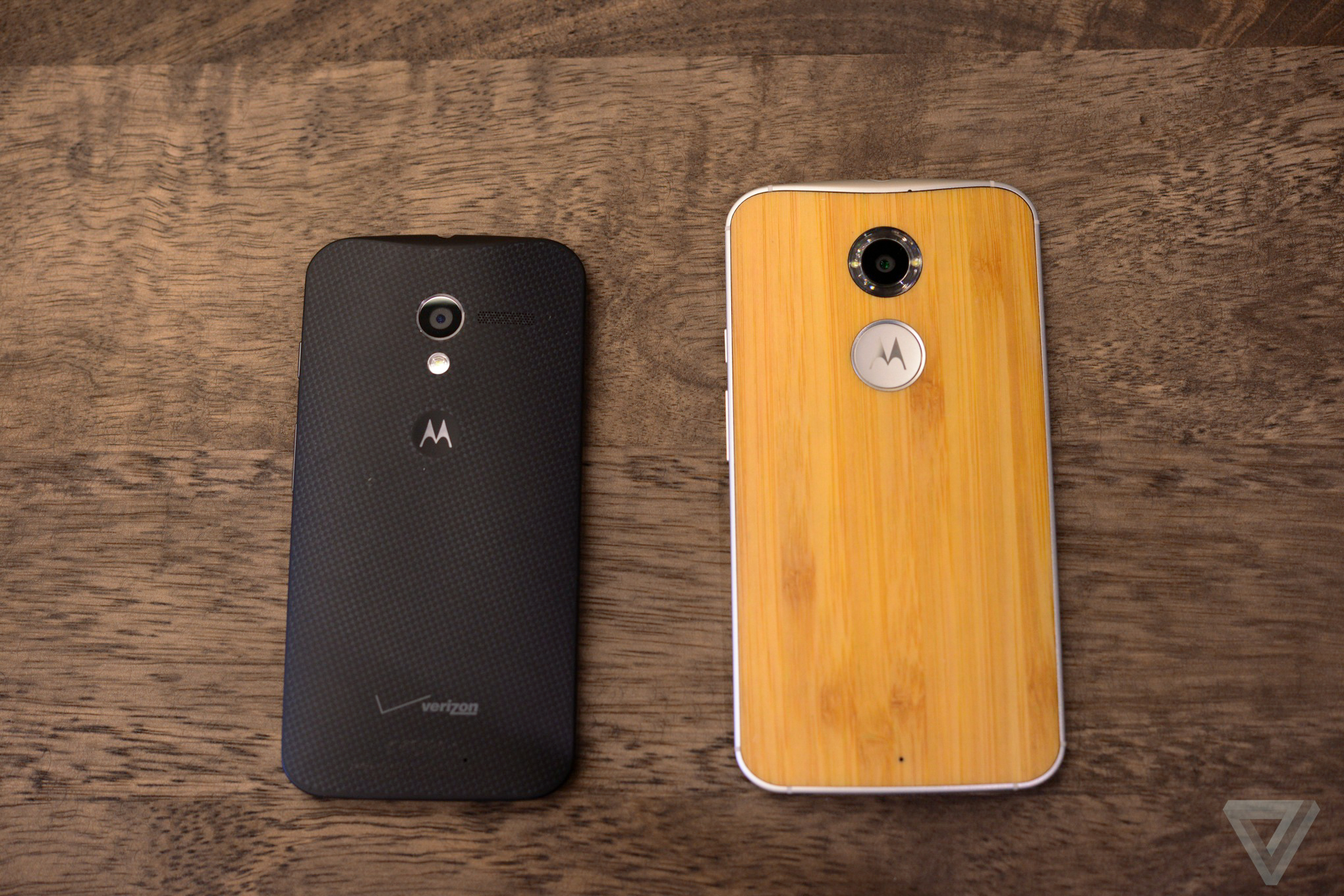 The display, a 5.2-inch Super AMOLED that Arshad says is considerably more power efficient than last year’s SAMOLEDs, delivers true 1080p resolution. I still don’t really believe that 1080p makes a noticeable difference to the average phone user, but the original X shipped with 720p at a particularly bad time: all of its primary competitors had just stepped up to 1080p. Sometimes, you just have to check the box so you can say "our number is as big as theirs," and that certainly seems to be the case with screen resolution — particularly in the spec-hungry American market. It was an important gap for Motorola to close, and now it’s closed.

The camera gets a megapixel bump, but that doesn't mean it's better
On the back, the dimpled Motorola "batwing" logo — a notable design element of the old X — is more prominent than ever, rendered in metal that’s surrounded by the customizable finish. Wicks points out that the dimple is in symmetry with the camera lens, where another unique design element emerges: a clear ring that surrounds the lens, containing two LEDs. It’s a well-concealed flash, a whimsical design touch that Motorola says helps diffuse the light for more even illumination when taking photos.

The camera is a wildcard; Motorola has a long tradition of delivering so-so imaging performance even when specs would suggest otherwise, and the original Moto X was no exception. The new X moves up from 10 megapixels to 13 and boasts some new features, like 4K capture, voice control, and a mode that takes multiple exposures and automatically selects the "best" shot based on smiles, motion blur, whether subjects’ eyes are open, and so on. We’ll cover the camera in great detail in the review, but from my short time with it, it feels exceptionally fast — you can belt off snapshot with zero lag. In particular, switching between still photography and the video camera happens instantaneously. 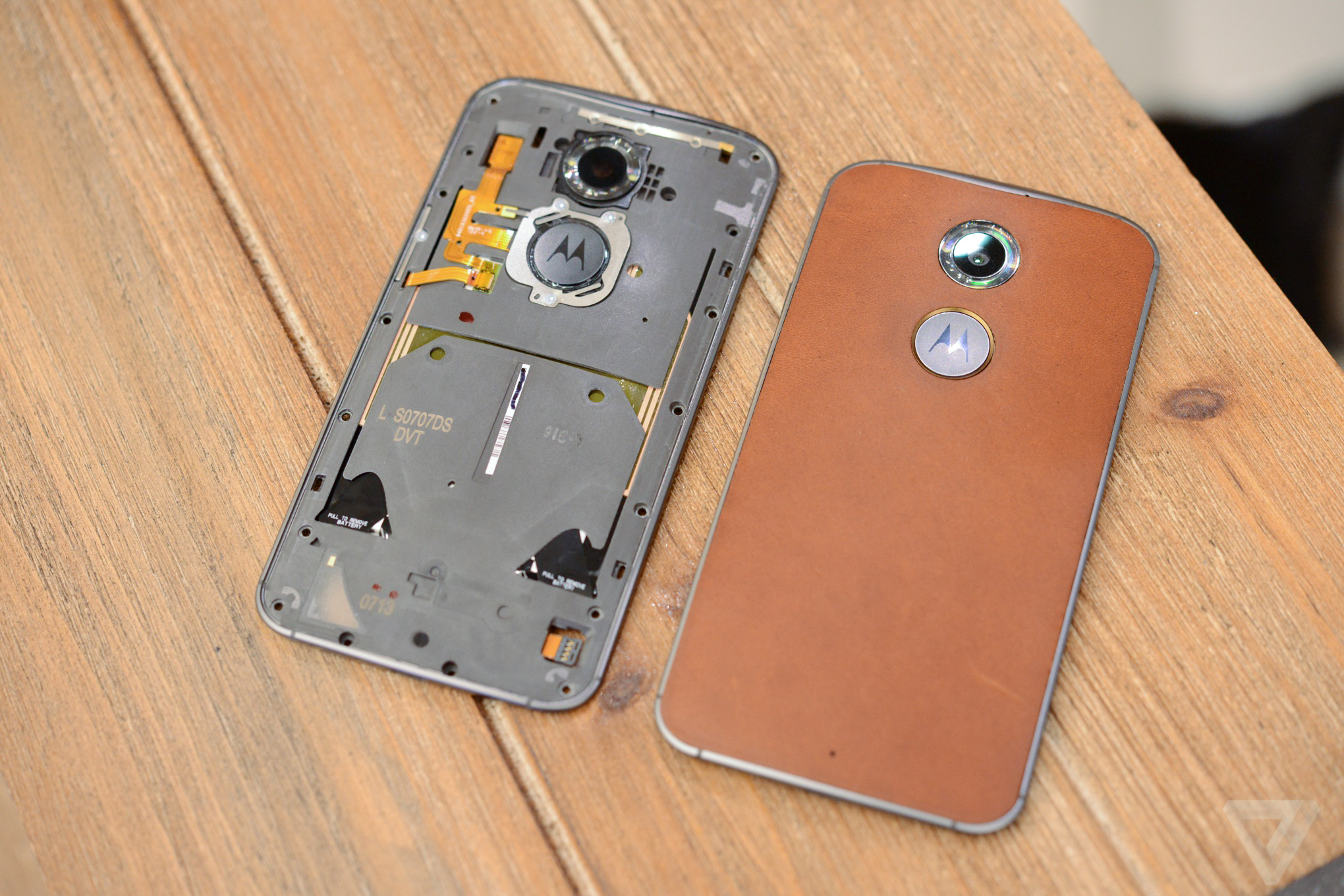 For software, the X launches on KitKat with a promise to roll out Android L as it becomes available. Motorola is taking the same tack here that it has for the past year — it’s stock Android with an exceptionally light touch of customization, and it’s great. It feels fast and fluid throughout (the company aimed for a consistent 60fps, and there’s a 2.5GHz Snapdragon 801 under the hood, which probably helps). All of the improvements that I’ve seen are smart, helpful touches: voice control, for instance, can now be triggered with a custom phrase of your choosing instead of "OK Google Now." (And yes, Motorola employees sheepishly admit that most of them with the new phone are using "OK Jarvis.") Active Display, which has been renamed Moto Display to help drive home that it’s a Motorola-specific feature, can now be triggered just by waving your hand over the phone while it’s sitting on a flat surface. This trick is accomplished by an array of infrared sensors around the screen; they’re visible as gray dots on the white X, but they’re basically invisible if you choose the black model. 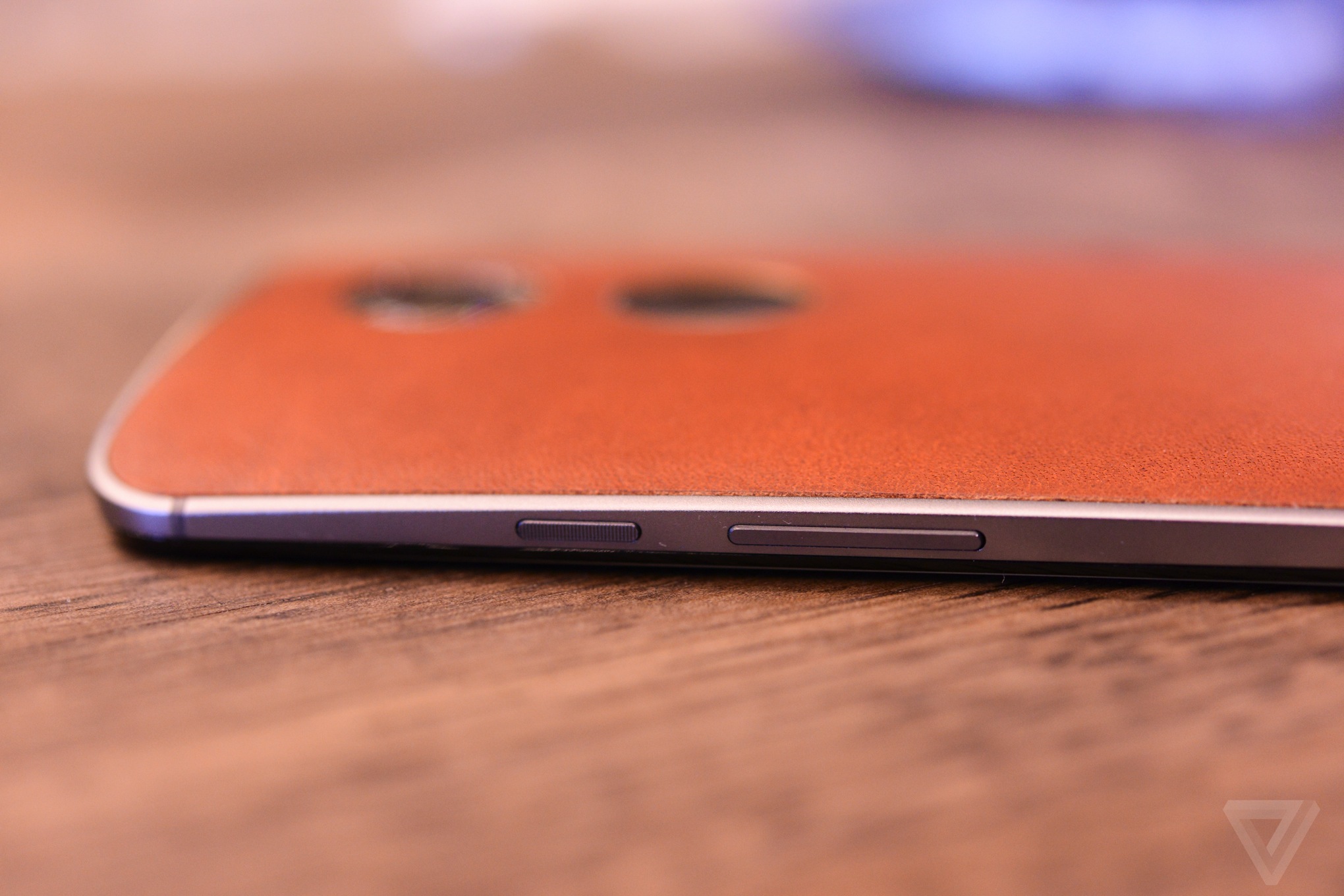 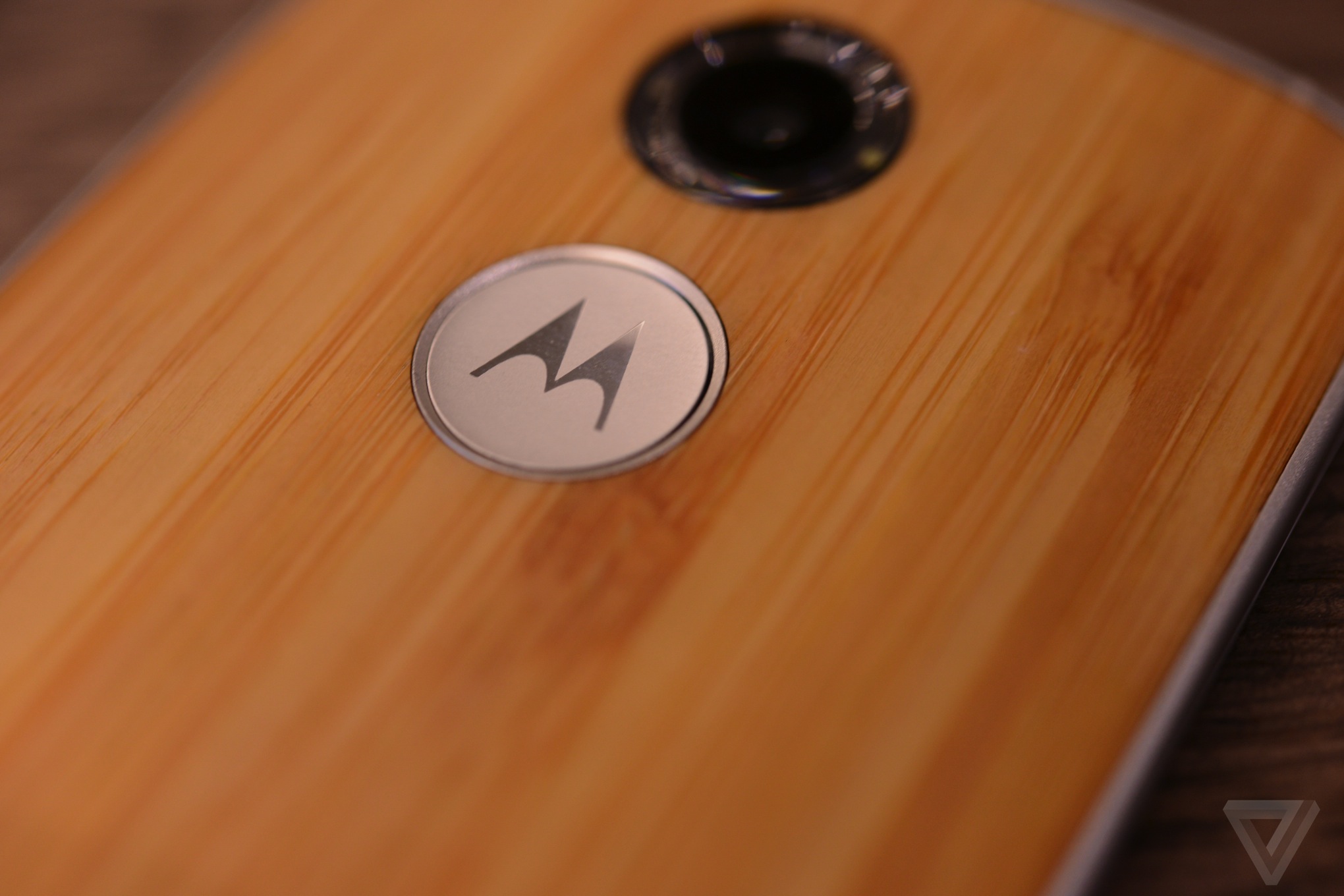 All that said, great hardware and software alone don’t necessarily win — we’ve seen great phones stumble time and time again over the years, the old Moto X included. Motorola’s secret sauce, its differentiator, has been customization. The winding down of the Texas factory where customized phones were built might have set off some alarm bells, but the new X (which will be customized in and shipped from China) actually goes deeper than the phone it replaces: in addition to the wood and colored plastic choices that Moto Maker users have seen before, you can now spec the back of the phone with actual leather in one of four colors. It feels and looks wonderful — and luxurious in a way consumer electronics almost never are — but I do worry about long-term durability and dirt resistance.

Meanwhile, buyers can also change the colors of the grilles that rest above the earpiece and microphone, and the metallic surround will come in two different shades of silver depending on whether you choose a black or white bezel. Every color combination I saw looked good, and more importantly, they each looked unique. These phones have more personality and say more about their owner out of the box than an HTC One, Galaxy S5, or iPhone ever could.

Carrier stores will be stocking more than just the plain black and white configurations in stores, which could help bridge the gap between the impulse buyers who want a phone on the spot and those who want a really good-looking X that still feels "customized."

By the time the refreshed Moto X is in carrier stores and on Moto Maker later this month, it’ll be going up against an all-new Apple threat — but this might just be the strongest competitor Android has ever put up. Game on.