Starting today Twitter will begin experimenting with commerce. It’s the latest effort to expand the atomic unit of a tweet beyond 140 characters. The implementation is straightforward: a big "Buy" button that will appear alongside an image of the item for sale. Give Twitter your billing and shipping info once and you can make one-click purchases from inside a tweet if you’re logged into the app or web service. The big question on Wall Street’s mind is whether this might provide the company a meaningful secondary stream of revenue alongside advertising. The more interesting question for the average consumer is if the real-time nature of Twitter might produce some interesting new forms of business we haven’t seen yet.

"There are already transactional conversations happening every day on our platform between brands and their customers or artists and their fans," says Nathan Hubbard, Twitter’s head of commerce. "What we’re trying to do is build the shortest path between an offer and a completed sale, to eliminate the friction of clicking a link that takes you to another website where you might have to type in a whole bunch of information each time."

For now commerce will only be turned on in the US and with a limited set of partners. Four startups: Stripe, Gumroad, The Fancy, and MusicToday, will be working with Twitter at the platform level. A handful of celebrities, merchants and charities are also going to be testing commerce at launch, including Pharrell, Home Depot, Donors Choose, and Brad Paisley. Sources familiar with the company's plans say it hopes the items on offer will range from sneakers to smartphones to new albums or a chance to support a good cause. It’s not what’s on sale for Twitter that will be most interesting, but the way the offers work.

"An opportunity to create a new kind of sales."

"Anything with a perishable component, temporal nature, or limited supply, is going to thrive on Twitter," says Hubbard. "Given the speed at which word can spread across our network, it feels like an opportunity to create a new kind of sales." It’s easy to image actors and musicians tweeting out tickets for secret screenings or concerts. Food trucks, already popular on Twitter, might peddle items that will be sold out or stale in a few hours. A more meaningful applications of Twitter's commerce could be connected to breaking news, for example tweets about a natural disaster connected directly to a donate button.

Can a merchant like Home Depot actually work on Twitter? "People are not going to be buying lawn mowers, because that’s not the mindset on Twitter," says Rick Heiztmann, a tech investor who has backed social networks like Pinterest. "What you will probably see succeed is digital goods. Tease a snippet of a larger article, book, game, or movie in a tweet, with a buy button that entices you to pay for the whole thing." Heitzmann says gaming companies his firm have invested in have already seen Twitter advertising pay off, with promoted Tweets an especially effective tool to drive app installs.

Heitzmann predicts the best results will come from offerings that leverage spontaneity and small dollar amounts. "Imagine a fantasy football draft night, and your favorite sports blog or athlete tweets out a message, inviting you to pay a dollar to find out who the sleepers are." Calls to action on Twitter looking to keep things simple have in the past asked users to text a certain number in order to make a donation. "That seems easy at first, but probably has a fifty percent drop off rate. If it’s as simple as seeing a tweet and clicking a button, I bet organizations like the Red Cross would see much better return on investment."

Facebook has also had success of late driving customers to small, digital transactions. But it’s experience with more conventional goods was less encouraging. Back in September of 2012 the company launched Facebook Gifts, trying to entice users bombarded with constant birthday reminders to buy a teddy bear or pair of socks. It never took off, and was shut down this year. Facebook also experimented with "storefronts", giving merchants the option to open virtual shops on its platform. But just a few months after their debut, most were shuttered. "For us, it’s been a way we communicate with customers on deals, not a place to sell," Gamestops vice president of marketing and strategy told Bloomberg. 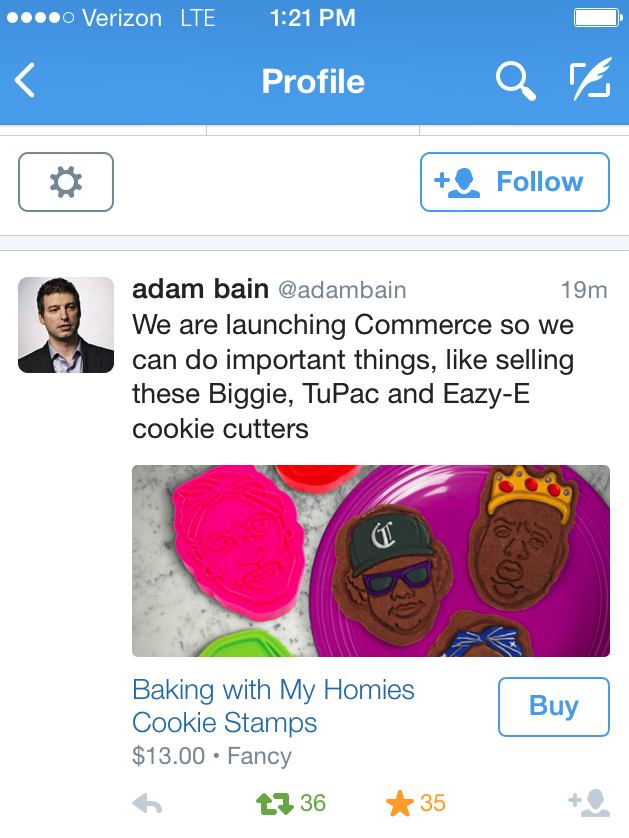 Twitter has struggled to connect with mainstream users in the way Facebook has, an obstacle that has limited its total size to about one fourth of its rival social network. But it has been successful with advertising, doubling its revenue over the last year, and commerce may simply be an extension of that."As a business, Twitter is an advertising platform that allows brands to target prospective or existing customers with lots of interest and behavioral data," says tech investor David Pakman. "Most online advertisers are carefully focused on the performance of online ads and completing the loop from ad to conversion is important."

If Twitter can hit a home run with commerce, the company may have a trump card it can play with investors, publishers, and advertisers. In the future it could monetize the Buy botton through promoted Tweets, or by taking an affiliate fee on each sale, but for the time being Twitter is adamant that this is an experimental product from which it won’t be making any money, looking instead to perfect the user experience and see what happens.

"Usually we put out products and our uses come up with the most interesting applications," says Hubbard. Twitter users brought the @ standard to the platform, and the first use of the hashtag and retweet. "Commerce might look very different in the US versus Indonesia versus Brazil. We are excited to put it into people’s hands and let them tell us what works."