There are multiple schools of thought on how motion control should work. Sometimes the tech tracks the parts of your hand directly, like Leap Motion. Sometimes it recognizes your extremities as single points, as does the Sixense STEM. Old-fashioned cybergloves capture every bend and twitch of your fingers. Tracking rings split the difference. The ring is the stylus of the motion-tracking world, capturing a single finger's movement and allowing for simple button controls. And Fujitsu is claiming to have developed a prototype that's very accurate indeed: it's supposedly able to detect individual words that you write in the air.

Fujitsu has a chart explaining the whole air-writing process, but essentially, it relies on software that detects "unwanted connections" (the parts where you'd normally be lifting your pen from the paper) and only tracks the remaining data. The company doesn't say how well it can actually take notes, but it claims that someone with no special training can enter numbers with 95 percent accuracy. There's also an NFC tag, although as far as that's concerned, it's markedly less fashionable than other options on the market. 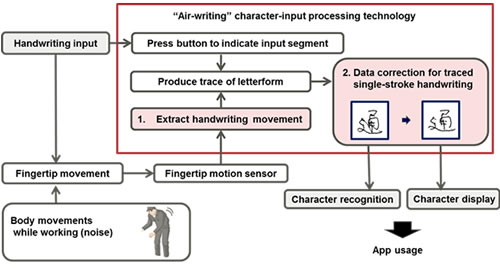 Everything about the air-writing ring screams "business sector," including the fact that Fujitsu refers to its weird, bulky prototype as "compact and lightweight" — you can get away with a lot more if someone's only using a device when they're on the clock. But it's applicable to the larger fields of virtual and augmented reality, which have been experimenting with finger rings already. Fujitsu suggests using it with a head-mounted display in order to write without a complicated controller.

The air-writing ring draws from a similar motion-tracking glove, which was announced earlier this year. While both just look like prototypes right now, Fujitsu hopes to get the ring out for some kind of real-world testing in 2015.