By Josh Lowensohn and Verge Support

Right now, there’s a war to make the thinnest smartphone in the world. Google is a part of that with Android and with its Nexus devices. But it’s also attacking the very idea of smartphones as we know them with Project Ara: a project to build a phone that doesn’t cram everything into the smallest package, but one that lets you pick out and swap every important component. It’s a lot like the way many desktop computers still work — but for your pocket.

We just got our hands on a very, very early version of a Project Ara device. It’s come a long way since its introduction in 2013, and even more since Google showed it off at its developer conference last year. Now it looks less like something that came out of a 3D printer, and more like something you could actually use. Even so, it still has many months to go before you'll be able to go to a store and buy it.

This prototype is currently in what Google calls "Spiral 2," which is a second major milestone in what the company originally envisioned as a two-year process. The advancements in this one include planned support for 3G networks, along with the framework for a marketplace where users will be able to find and purchase extra modules. On stage today at the second Project Ara Developers Conference just down the road from Google's Mountain View headquarters, we saw it working with a 720p display module and receiver module attached the front, while the space for eight modules on the back included things like a camera, battery, and microUSB adapter. These are slotted into both sides of the phone, where they will stay put using electro-permanent magnets, though in these prototype versions they simply slide in.

Google today explained how you’ll actually get them off while the phone’s still running, which involves a software app that can eject specific modules like USB drives. That includes hot-swapping a dying battery with a fresh one while your phone is still running, something Project Ara's team says it can currently maintain for about 30 seconds (although we weren’t able to test that claim). The eventual goal is to give users 1 to 2 minutes to make the change. 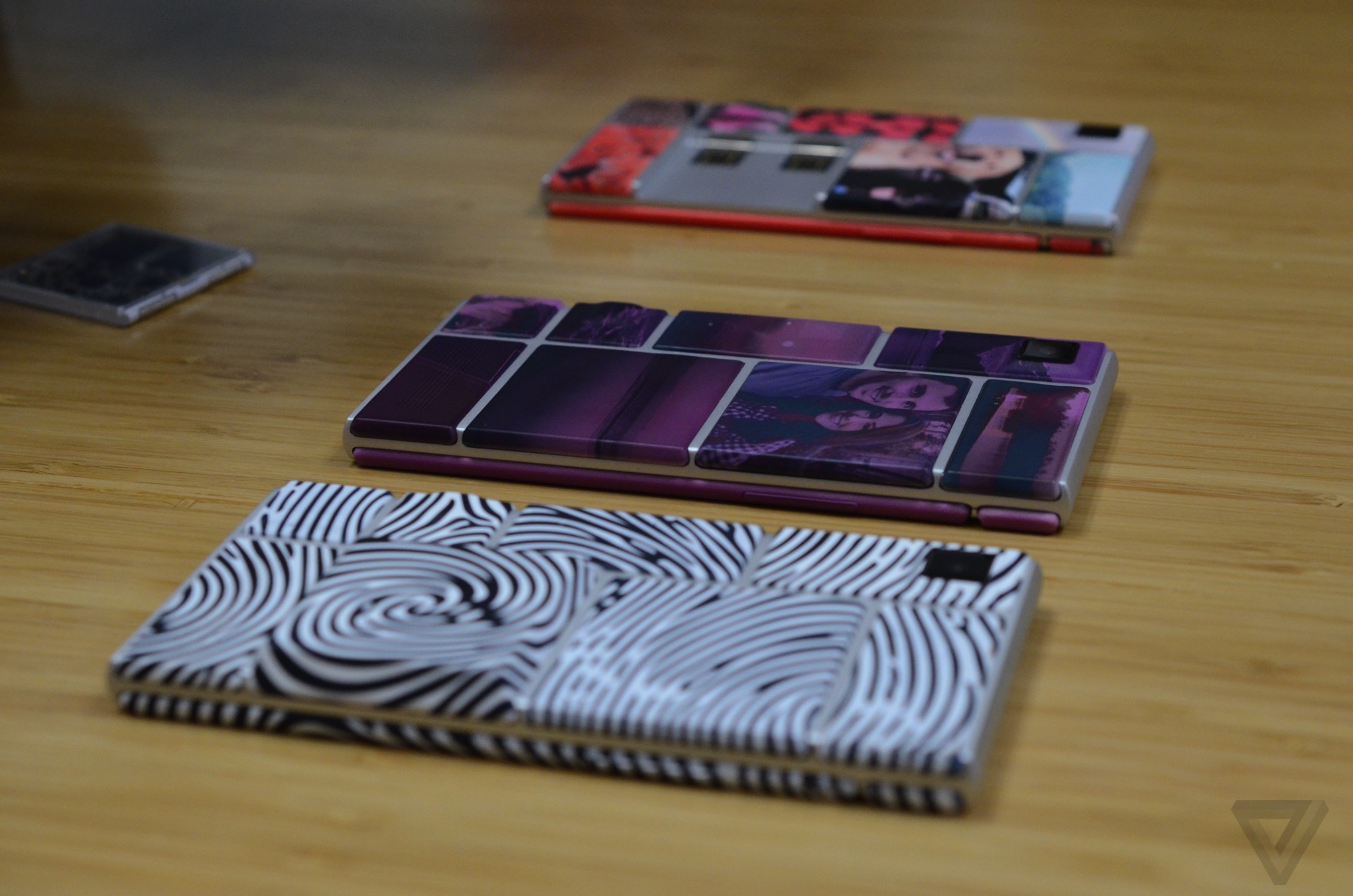 This very early version of the phone we played was functional, although we weren't allowed to turn it on and use it, in part because the touch features aren't up and running, Google said. The company showed it booting up on stage, but not working. The hardware itself feels very solid, thanks to its aluminum and steel frame, which looks like a ribcage when all the modules are popped out. The modules on the other hand feel light and plasticky, and made holding the phone feel a bit strange. If you're used to the smooth corners you'd find on most smartphones, the ribbed channels on the Spiral 2 feel bizarre. Nothing rattled or slid out while we were playing around with it, though it's hard to tell how it will really work without the magnets.

Google's moved the magnets right to the phone's frame

Google says it’s already made a few changes since the initial prototype. That includes moving the electro-permanent magnets from the modules to the metal endoskeleton frame. It also changed its plan to 3D print the covers of modules, which are now being done with injection-molded polycarbonate plastic. That was going to be a key factor of customizing the modules, which Google now expects will be done when people are designing their phone through its shell maker, which is a bit like Motorola’s Moto Maker. There are also plans to let buyers design their phone at the point of purchase, then print the back of the modules on the spot.

Coming up after this version is Spiral 3, which will add things like 4G LTE, support for anywhere between 20 to 30 different modules, and what Google hopes will be all-day battery life. After that, Google plans to do a market pilot in Puerto Rico in the second half of this year where people will actually be able to buy one, from food trucks no less.