If you cast only a cursory glance at this morning's tablet announcement from HP, you might have needed a second (or third) look to realize that the company didn't announce a partnership with HTC. Instead, HP announced two new Android tablets that happen to look eerily similar to HTC's flagship phones. There's just one major difference — they're both bigger, and one of them is enormous.

Set against a backdrop of seven other tablet announcements, the HP Pro Slate 12 was the standout. It's a 12.3-inch behemoth that is surprisingly easy to handle. At 850 grams — just under two pounds — it's not necessarily light, but it doesn't feel heavy, either. You could hold it one-handed if you'd like, just probably not for very long. What helps the device feel smaller than it should is the extremely thin profile.

It's surprisingly easy to handle

HP managed to keep this folder-sized tablet under 8mm thick. Laid out on a desk next to an iPhone 6, you have to get dead on eye-level with them to really see the 0.8mm difference. One big trade-off here is the edges of the screen can distort with just slight pressure. It's similar to how I felt when I briefly toted around the iPad Air 2 — the convenience of its thinness was overshadowed by my constant worry that I would damage the screen, or worse.

Speaking of the screen, the 1600x1200 display looked good, but not great. Like the iPad, HP opted for a 4:3 layout because consumers spend so much time using tablets in a portrait orientation. The size of it is dazzling, sure, but it's a far cry from the high-density displays found in Apple's iPad or Microsoft's (comparatively chunky) Surface Pro 3. Worse, it seemed dim even at the highest brightness setting, which wasn't just a reflection of the room we were in — other tablets being debuted looked just fine in the event space. 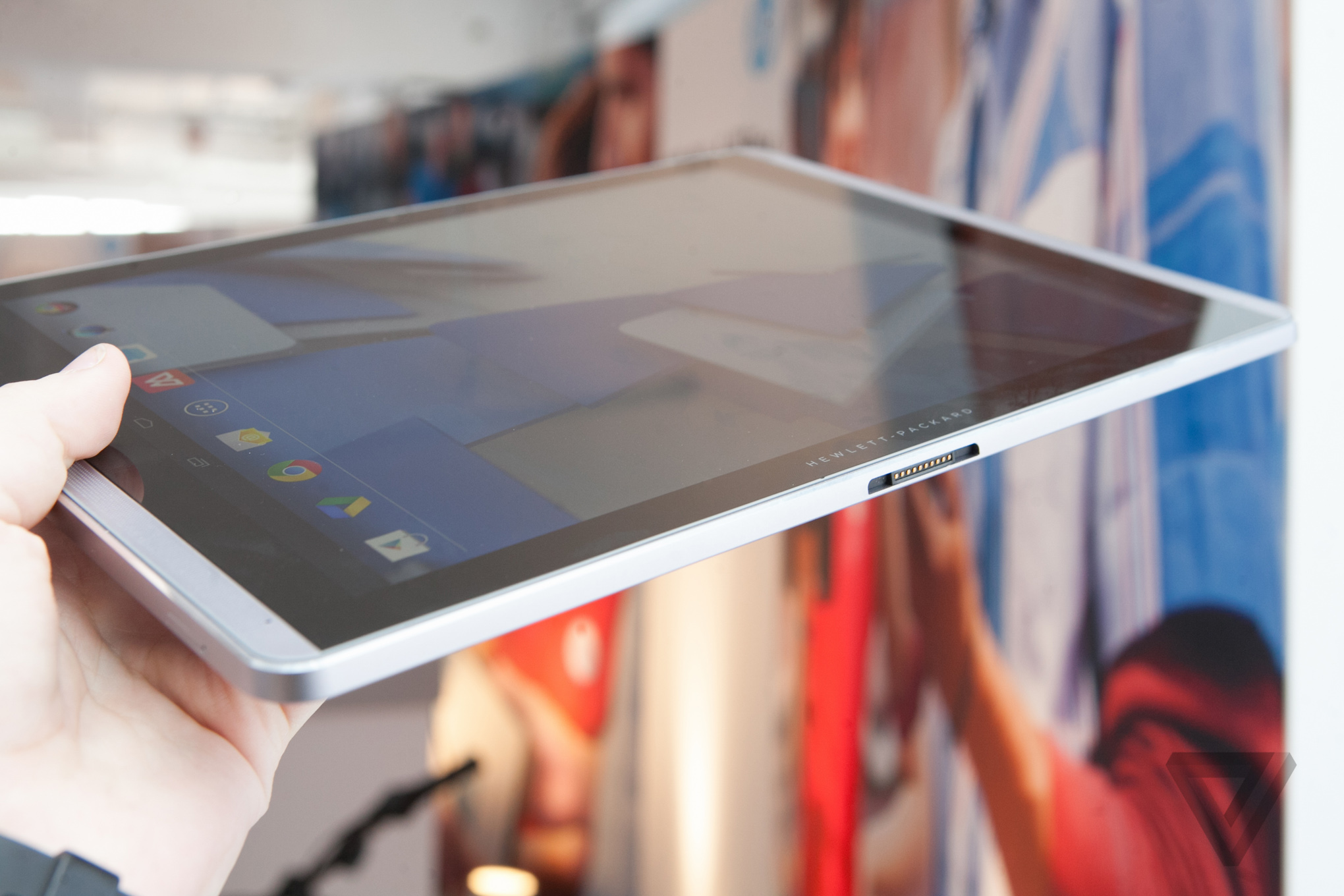 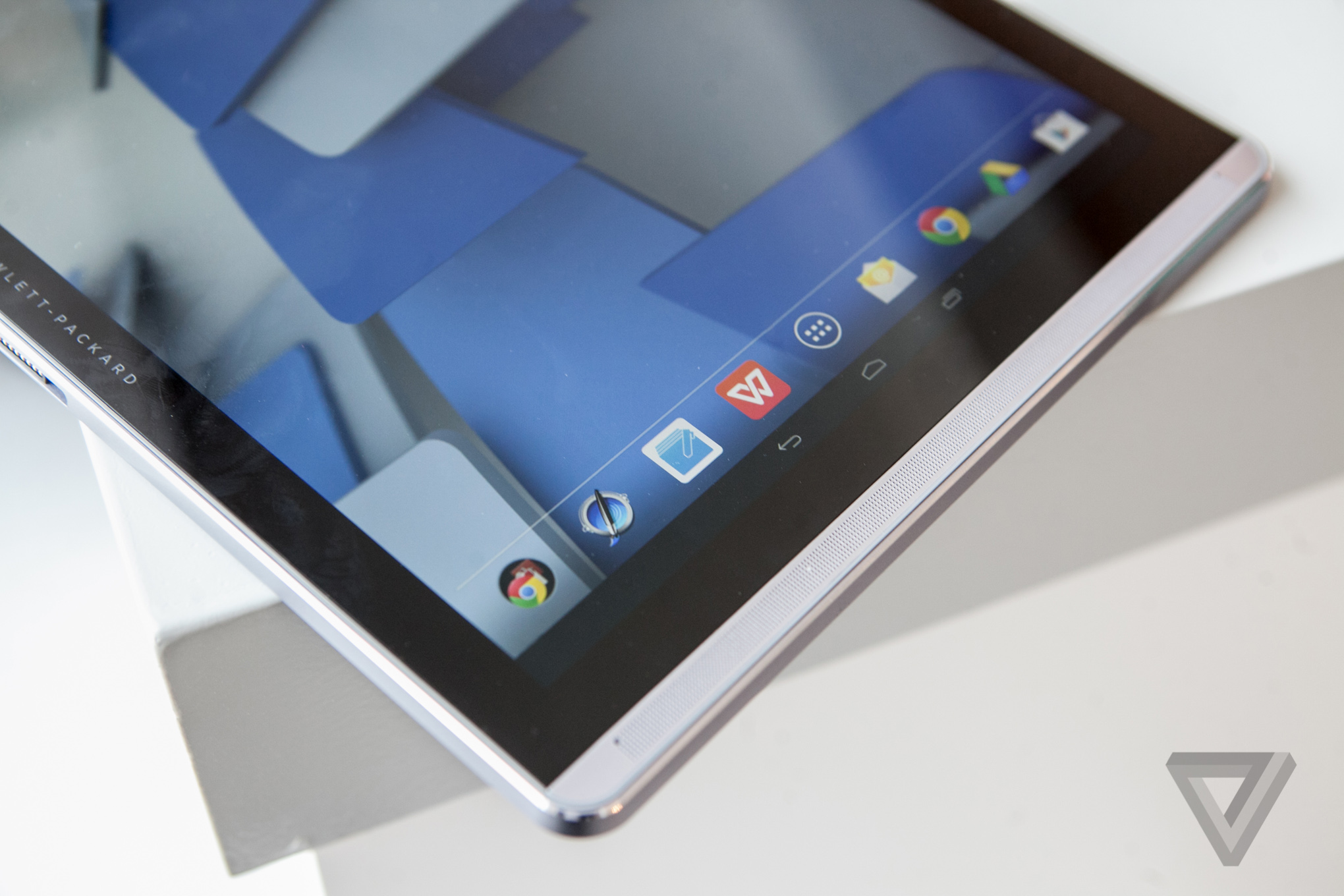 The size of it is dazzling

That said, I can't say that I wouldn't want to give this thing a shot as a media consumption device for the home. It makes my current (and woefully outdated) iPad 2 seem undersized in an alarming way. I don't know that I'd want to do any serious computing on it — it stuttered a bit when I moved through some of the apps, the camera especially. (Although I can't stop thinking about what it would be like to walk around New York City taking pictures shoulder to shoulder with cell phone snappers while I held this massive screen.) That's not to say the production versions won't behave differently, but it was noticeable in the display unit.

By comparison, the 7.9-inch HP Pro Slate 8 is tiny, but it shares something in common with its stablemate — the 4:3 aspect ratio, which differentiates it from other smaller tablets like Amazon's Kindle Fire line.

Also announced was HP's Duet pen, which will work with either tablet. When you're using it, the pen emits an ultrasonic sound that the tablets can track and triangulate with internal microphones, which is supposed to increase precision. You can also swap the tip out for an actual ink tip, and the tablet will map and store whatever you're writing on actual paper. It's a nifty trick and, considering the pen is included with both tablets, a welcome development in stylus technology. 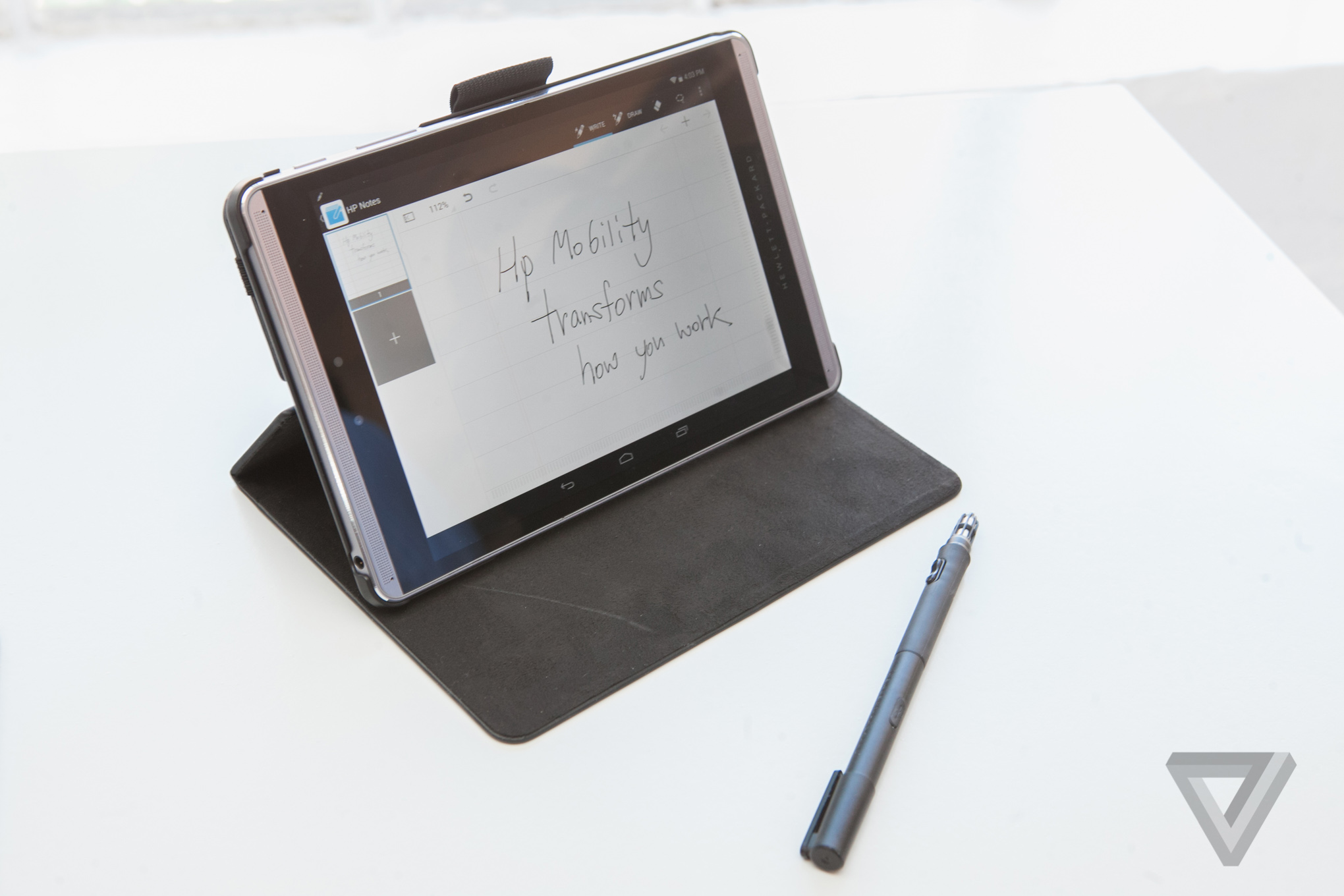 HP's whole event was hyper-focused on businesses: small ones, big ones, and how they all have needs for specific device solutions. Doctors and nurses need clean and splash-resistant tablets. Shop owners need easy-to-use, modular, point of sale devices. And schools need education-focused tablets that students and teachers alike can use and abuse. For the most part, the wave of tablets they announced all looked like viable options to fit these needs. The only two specifically designed for consumers were also the gaudiest. Considering the crowded tablet market and the trend of bigger phones, that might be HP's best option.