Swedish hardware designers Teenage Engineering have made a name for themselves by building some of the most unique and creative musical gear on the market. But devices like the gorgeous, retro-futuristic OP-1 synthesizer and OD-11 “cloud” music speaker come at a cost. Until now, you needed relatively deep pockets to pick up Teenage Engineering gear — the OP-1 costs $849, while a single OD-11 speaker will set you back $899.

But that all changes with the launch of the Pocket Operator synth and drum machine series, a set of three calculator-sized music-making tools that can be yours for less than $200 total. “Our goal was to make a synth that cost $49,” says CEO and head of design Jesper Kouthoofd, before pausing a bit sheepishly and admitting: “but we failed on that, so it'll be $59.” 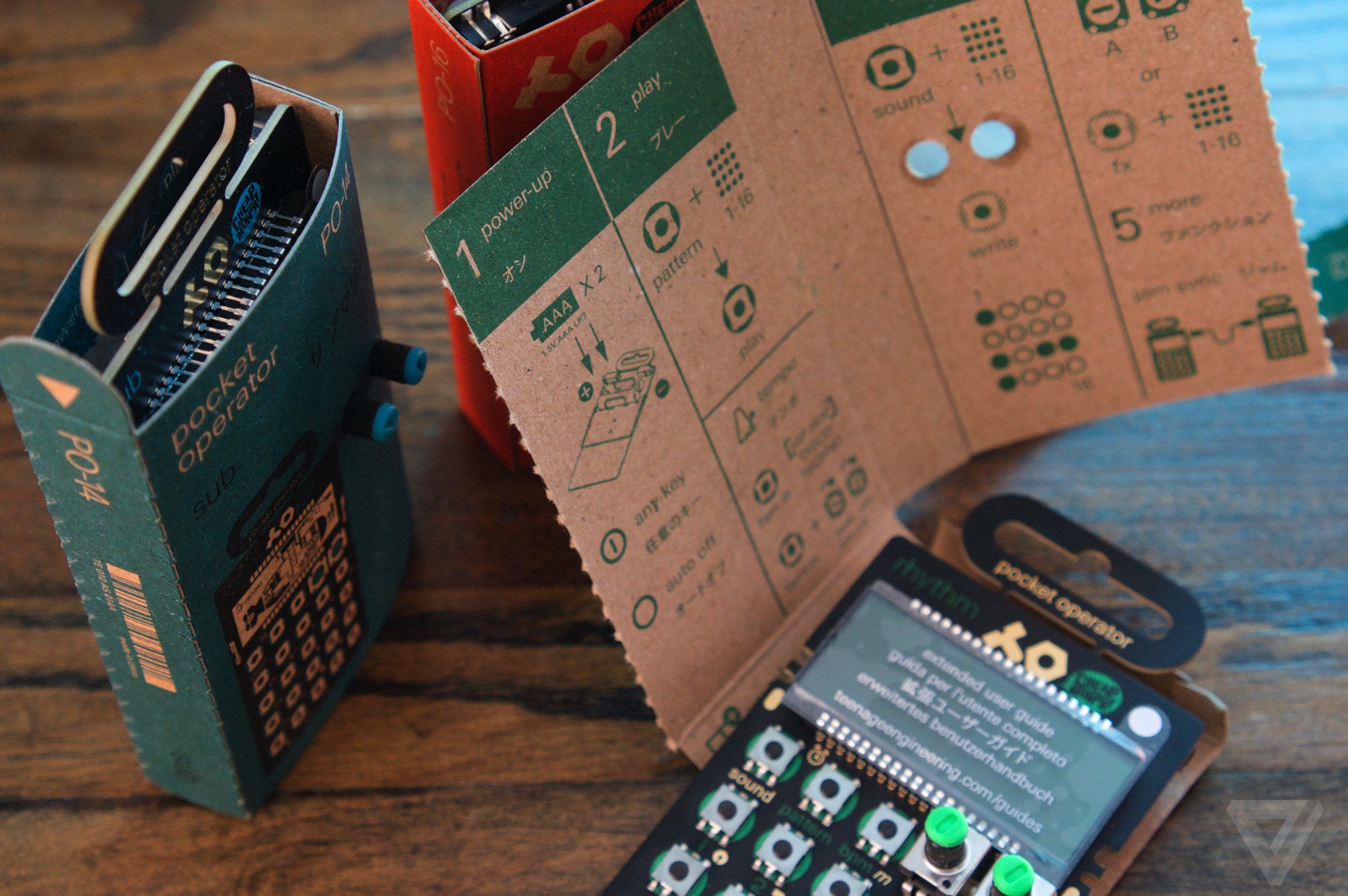 The PO-12 "rhythm" drum machine, PO-14 "sub" bass synth and PO-16 "factory" melody synth can all be ordered today, with delivery expected soon. Though they’re more simple, stripped-down products than the OP-1, that low price means Teenage Engineering can now target a whole new class of music fan — those who may have fallen in love with the company’s products but can’t justify dropping $800 on the company’s flagship synthesizer.

"We really wanted to make a [Nintendo] Game & Watch, but for the synth world."

Indeed, the first thing you notice about the new PO series is just how minimalist the design is. "We removed everything that doesn't have something to do with how it sounds," says Kouthoofd. "That left us with a super-thin circuit board; all the components are under the display." As a result, the PO series — with its segmented, black-and-white LCD display — looks and feels vintage, almost like an old calculator prototype. "We really wanted to make a [Nintendo] Game & Watch, but for the synth world," Kouthoofd says. "So we used the same technology as they did in the ‘80s. We wanted to use the old stuff." 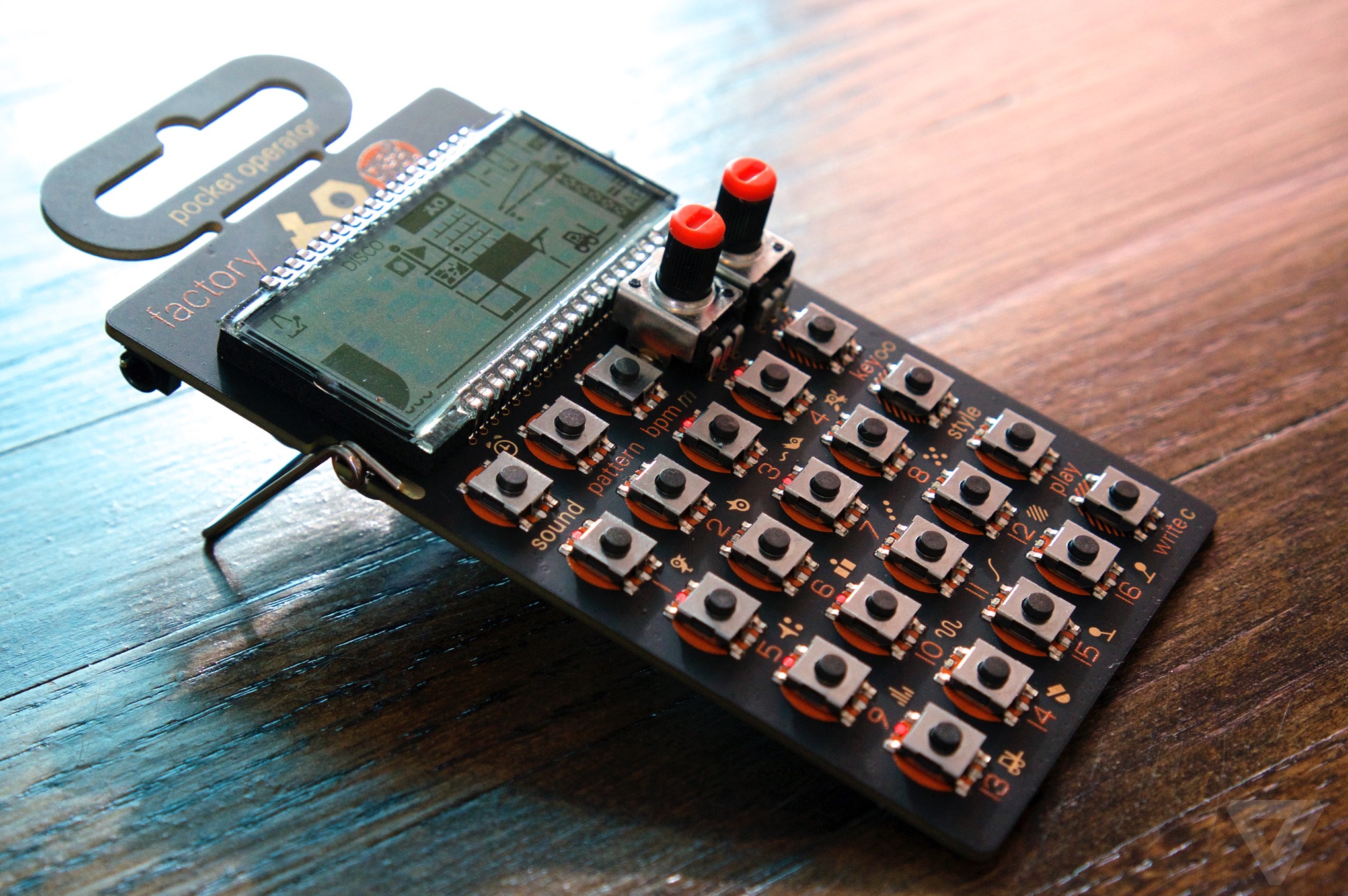 Each of the PO devices has its own graphical theme on the display — a nod to the gaming systems that inspired the project — with animations that sync to your compositions. It’s pure fun, but it’s the kind of fun touch that Teenage Engineering builds into all its products (the OP-1’s more advanced screen features a whole host of complex visual animations).

"When we did OP-1 we found it was kind of nice to have graphics moving in pace with the music when you compose, like a companion," says Kouthoofd, "so when you get bored with the music you can watch a little animated story." But the animations also serve to visually differentiate the three devices, which, aside from slight color differences, look identical. Lastly, building these screens helped Kouthoofd check something off his bucket list. "You have your checklist in life," he notes, "and I have just always wanted to build a custom segmented LCD."

Despite their spartan design, the synths have a host of smart features that make these devices far more powerful than they might appear. Each device has two 3.5mm ports, which lets you output audio to a mixer as well as chain all three devices together, with a master unit setting the tempo and patterns for the other "slave" units to follow. Another low-tech (but no less useful) design decision is the small wire stand on the back that lets you prop up the devices for easy use on a table. Even the power source is clever — the PO series runs on two AAA batteries, something I haven’t used outside of remotes in years. Thanks to the basic screen and processors, Kouthoofd says that the batteries should provide a good two years of standby time (how long they’ll last in heavy use remains to be seen). 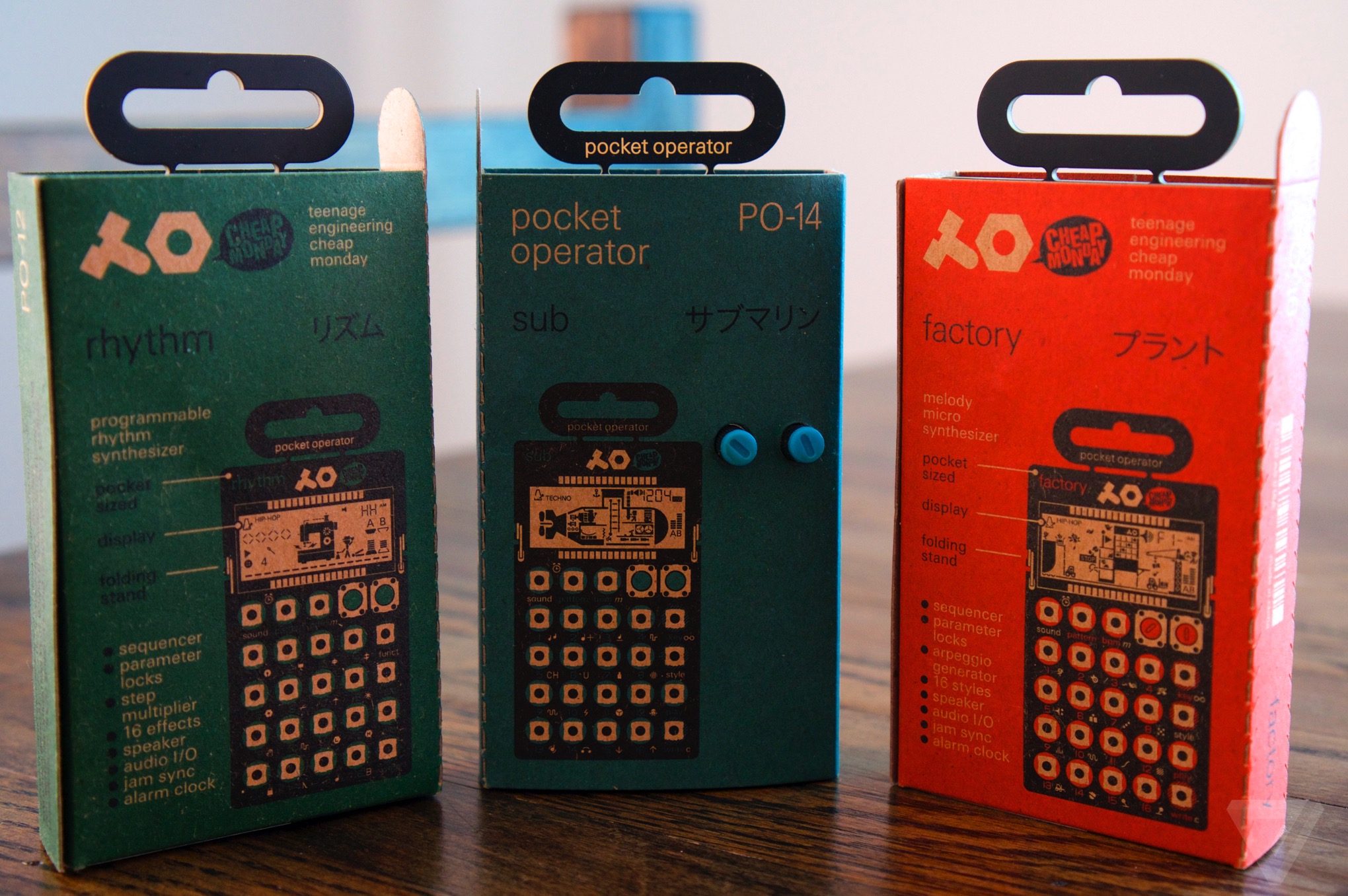 After spending just a few minutes playing around with the PO series, I can definitely say that these toys are far more complex music-making tools than their minimal design might lead you to believe. They’re more meant for sequencing repetitive patterns than composing melodies on the fly, but you can build out some pretty complicated songs nonetheless. Users can record 16 different patterns (each with 16 customizable steps for different notes or drum hits), and play them back in any order you choose. Sixteen is the magic number throughout: there are also 16 different preset sounds (that you can tweak with the two colored knobs) and 16 effects you can apply to any sound.

It’s certainly not as complex and open-ended as the OP-1 — there isn't really a standard keyboard layout for you to make music on, for example, so full chords aren't really an option here. But with a relatively cheap entry price, these devices offer casual electronic music composers an endless amount of fun. "In these machines, you get a part of the OP-1 but in a really affordable way," says Kouthoofd.

A "back to the roots" project for teenage engineering

This could be viewed as Teenage Engineering’s first mass market play, but it remains to be seen whether these significantly cheaper projects will grow awareness for the company, which so far has primarily been a boutique brand for designed-minded music fans. The PO series is still a lot more expensive than iPhone music-making apps, for instance. But if nothing else, developing the PO series was a way for Teenage Engineering to get back to its roots. Kouthoofd says that these synths are the result of an effort "to get our creativity back." Judging from the time we’ve spent with the Pocket Operator series thus far — mission accomplished.

The following photos come courtesy of Teenage Engineering and show some early prototypes and the design process behind building the Pocket Operator series.

A host of different design concepts for the Pocket Operator series, including some that ended up being used in the final product
Most Popular
From our sponsor
Advertiser Content From