An audible solution for a visual problem

Last year was a busy one for Spotify. It hit 10 million paid subscribers. The company feuded with Taylor Swift over how much money she did or didn't make from streaming. And the company revamped its mobile app across all platforms.

But even with that redesign, the mid-year removal of the ability to preview 30-second clips on the "Discovery'" section left users clamoring for music discovery solutions. "We were pretty obsessed with that problem," Spotify product manager Miles Lennon tells me. After a year of work, the answer they came up with is a beautiful one called Touch Preview.

It's not a new section of the app, or a complicated algorithm. Instead, it's a subtle change to the user interface. It's also the first global preview solution the app has ever featured. Anywhere in the Spotify app — whether you're viewing an album's tracklist, searching genres, or browsing playlists — all you have to do is tap and hold to activate Spotify's 30-second preview of that song. But what's really cool is what you can do after that.

Once you've activated a preview, you drag your finger up or down through a list to another song and the app instantly jumps to the next 30-second clip. Each rectangular box containing the song title and artist information fades to a lighter shade of grey as your finger slides through the list, and the songs fade in and out accordingly. Drag to the top or bottom of the screen, and edge scrolling is activated. Tapping and holding on album or playlist art brings up a grid of album covers, and the same action works here, too. Previews play instantly and start and stop (with just the right amount of fade, so as not to sound jarring) as you drag your finger around the different images.

Tapping and dragging around a list or grid makes for a seamless way to get a sense of what each track is like, and moving through it quickly is reminiscent of spinning a dial on an AM / FM radio; brief snippets of each song blur together — all that's missing is the static. It's by far the quickest way to sample music that the app has ever offered.

If a preview suits your taste, you swipe right to queue it up or left to save it to your collection. If you're listening to a song before you activate Touch Preview, you're dropped right back into the song where you left off when you lift your finger. The whole procedure is startlingly simple, and it is easy to believe Lennon when he says this will become a big part of how people eventually navigate the mobile version of Spotify. 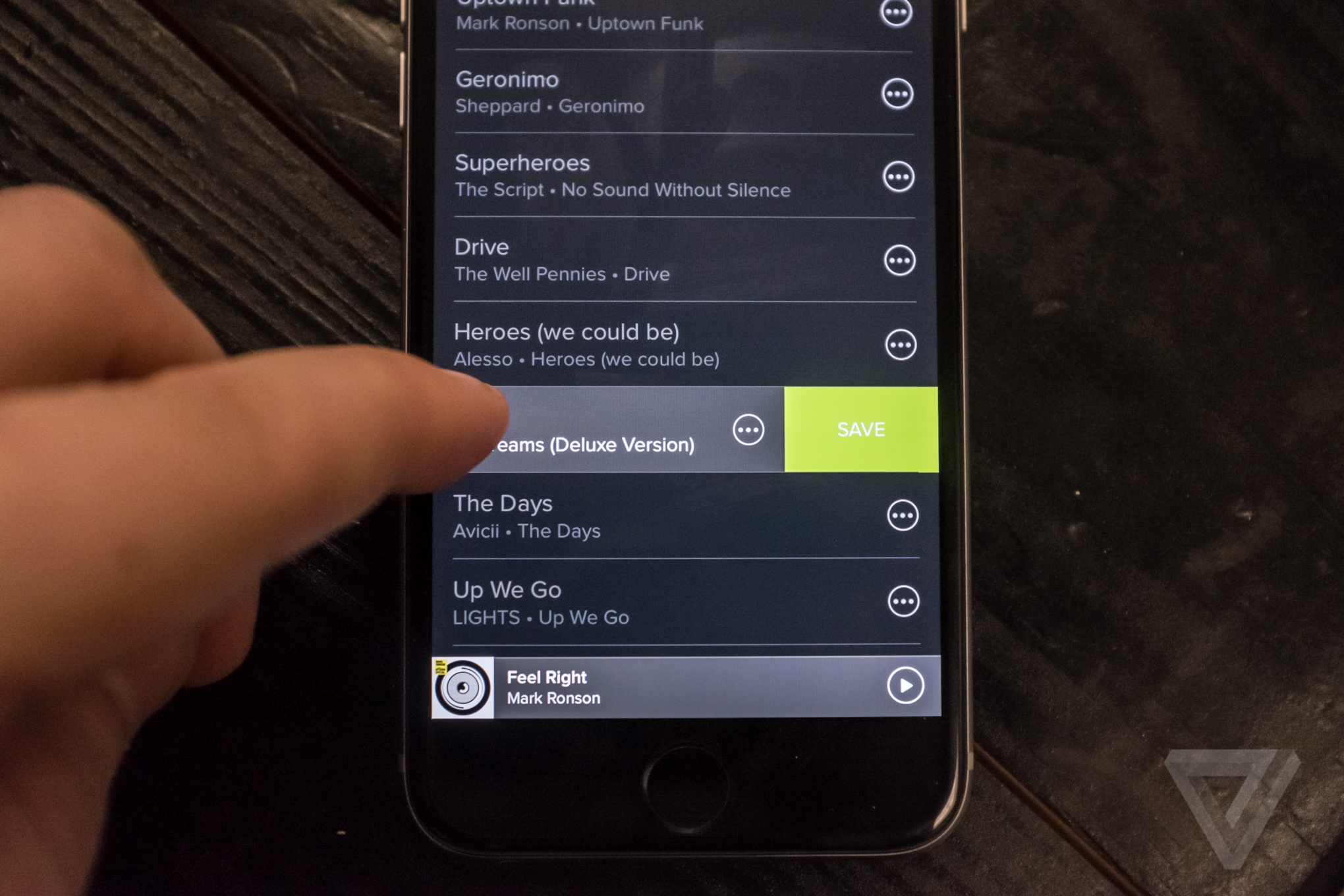 "Users who try this end up using it a lot. It becomes habit-forming."

"It has a really awesome delight factor," he says. "What we see in the data is that users who try this end up using it a lot. It becomes habit-forming." The idea for Touch Preview was born out of a hack week that took place about a year ago. At the time, one of the ideas being tossed around was based on the company's research on music discovery habits. The team found out that users were souring on the idea of discovering music visually.

"Album art, playlist covers — these are things that don’t always communicate what a piece of music is going to sound like," Lennon says. "So we thought, why do we spend so much time tweaking how music is browsed visually when maybe it should be browsed audibly?"

The company spent the time since then polishing how the interface works and looks, and also making sure it works as quickly on 3G and LTE as it does over Wi-Fi. The team accomplished all of that with Touch Preview.

The new feature will roll out in an update starting today on iOS devices, and it will make it to Android and other platforms soon.