Microsoft's Q2 2015: Surface and Lumia up, but Xbox and profits down

Microsoft's Q2 2015: Surface and Lumia up, but Xbox and profits down

Microsoft has published its Q2 fiscal 2015 earnings report, and the company has made $5.6 billion in net income on $26.5 billion in revenue. Revenue has increased 8 percent from the same quarter last year, but net income has dropped 10 percent. Microsoft does note that it has incurred a further "$243 million of integration and restructuring expenses" related to the Nokia phone business purchase, which explains part of the drop. Despite the blip, Surface and Lumia are both looking stronger for Microsoft alongside its impressive cloud and server growth. While Microsoft continues to move away from relying on Windows for money, its cloud and server offerings are helping to balance its revenue losses with Windows. This is particularly important as Microsoft maintains its transition and looks to Windows 10 later this year to boost its mobile, tablet, and PC efforts.

We’re into a second quarter of Surface Pro 3 sales, and Surface-related revenue ($1.1 billion) has jumped 24 percent from the same period last year. Exactly how many Surfaces were sold is still a mystery, as ever, but it’s not surprising to see Surface revenue jump again. In Q1, Microsoft reported an increase of 127 percent up to $908 million, and we’re well past previous quarters where Microsoft took a write down for Surface RT or Surface revenue was hit by canceled products like the Surface Mini.

Microsoft is beginning to regain momentum against Sony’s PlayStation 4 in the US, and the company notes that it has sold 6.6 million Xboxes (that’s Xbox One and Xbox 360) in the quarter ended December 31st. That’s a decrease on the 7.4 million sold over the quarter last year. While that's a combined value of Xbox 360 and Xbox One sales, shipments of the Xbox One itself have undoubtedly been boosted by the temporary price cut the console received just before the busy holiday period, and Microsoft has now made that a permanent price drop to $349 for the version without Kinect. These price cuts have helped hit Xbox platform revenue though, with it decreasing 20 percent year-over-year. Microsoft notes a natural decline in Xbox 360 sales also affected overall Xbox performance. The company has not revealed how many Xbox One consoles it sold during the recent quarter.

The PC market isn't making Microsoft as much money anymore

The PC market appears to be poised for growth after two years of decline, but we're not there just yet. OEM revenue for Windows decreased by a massive 13 percent this quarter. Microsoft blames the drop on the business PC market and lower-priced licenses for devices sold to students and teachers. Businesses are clearly holding off on some PC upgrades as well as moving from Windows XP to Windows 8, because most are continuing to skip Microsoft's latest operating system. Microsoft is now focused on positioning Windows 10 as the upgrade for Windows 7 and even those businesses still stuck on Windows XP. A second Technical Preview debuted last week, ahead of the company's earnings, and it includes a number of big changes. Microsoft is attempting to tackle the 2-in-1 laptop and tablet market with a Continuum mode that intelligently switches between keyboard and mouse to a tablet and touch-friendly mode. It looks like the company might be finding a good balance with the Start Menu returning, but we'll have to wait some months until the final version is ready to know if Windows 10 will help the PC industry move back into growth. 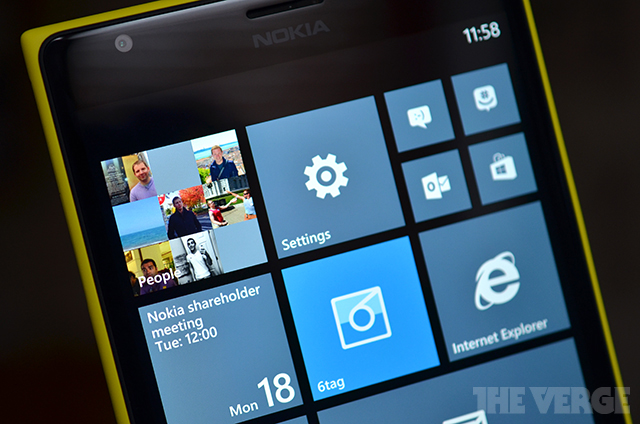 Lumia is on the way up

Microsoft has made it clear that it will bring its apps and services to Android and iOS, but it still has its own Windows Phone operating system and hardware to push. On the Lumia side, Microsoft continues to focus on the low-end without a flagship handset, but the gamble has paid off. Microsoft has sold 10.5 million Lumia devices in the latest quarter, compared to the 8.2 million during the same period last year. That's an impressive 28 percent increase year-over-year, and exactly the direction that Lumia and Windows Phone needs to be heading. However, it comes at a cost. Windows Phone revenue has dropped by 61 percent, and Microsoft blames a Nokia commercial agreement which terminated during fiscal Q4.

As expected, Microsoft's server and cloud offerings are still strong. Revenue has increased 9 percent for server, and commercial cloud revenue grew by massive 116 percent thanks to Office 365, Azure, and Dynamics CRM. On the consumer side of Office, 9.2 million people are now subscribed to a mix of Office 365 Home and Personal, up from 3.5 million this time last year. However, Office consumer revenue is down 25 percent. Microsoft blames the transition to cloud versions of Office and a decline in Japan’s PC market where the company says "Office has high attach to PCs."

Microsoft will be holding an investor call at 5:30PM ET, and we'll update this article with any relevant information.