Every startup has an origin story, sometimes original but often manufactured to make a company seem more exciting. Ash Dhodapkar’s is about as mundane as they come. While on vacation he managed to lose his wallet and, with it, all his credit cards. It’s something that’s happened to many of us. But not all of us have a PhD in electrical and computer engineering, experience with hardware design, and friends who are experts in electromagnets. After figuring out what cards were missing and calling to make cancellations, he thought it would be pretty great to design something that would both consolidate his credit cards and, more importantly, lock itself down if lost.

After a year and a half of development (and with some more yet to go), the result is Swyp. It’s a super thin metal credit card with nothing more than a small front display and a pair of buttons that can become any credit card in your wallet. It also does loyalty and gift cards. That’s not a new idea — see Coin and Plastc — but Dhodapkar’s company aims to sell one that’s more durable, and in Plastc’s case, markedly less expensive. It also looks really damn cool.

A late-stage prototype of the card I saw last week (but did not get a chance to try out in the wild) is the same size and thickness of most plastic credit cards, but made out of metal. The black-and-white display on the front is very easy to read and well laid out. It shows you which credit card you’ve selected along with its expiration date and security code. Eventually it will also be capable of displaying scannable barcodes for barcode-based loyalty cards, like the ones at big drugstore chains like CVS. 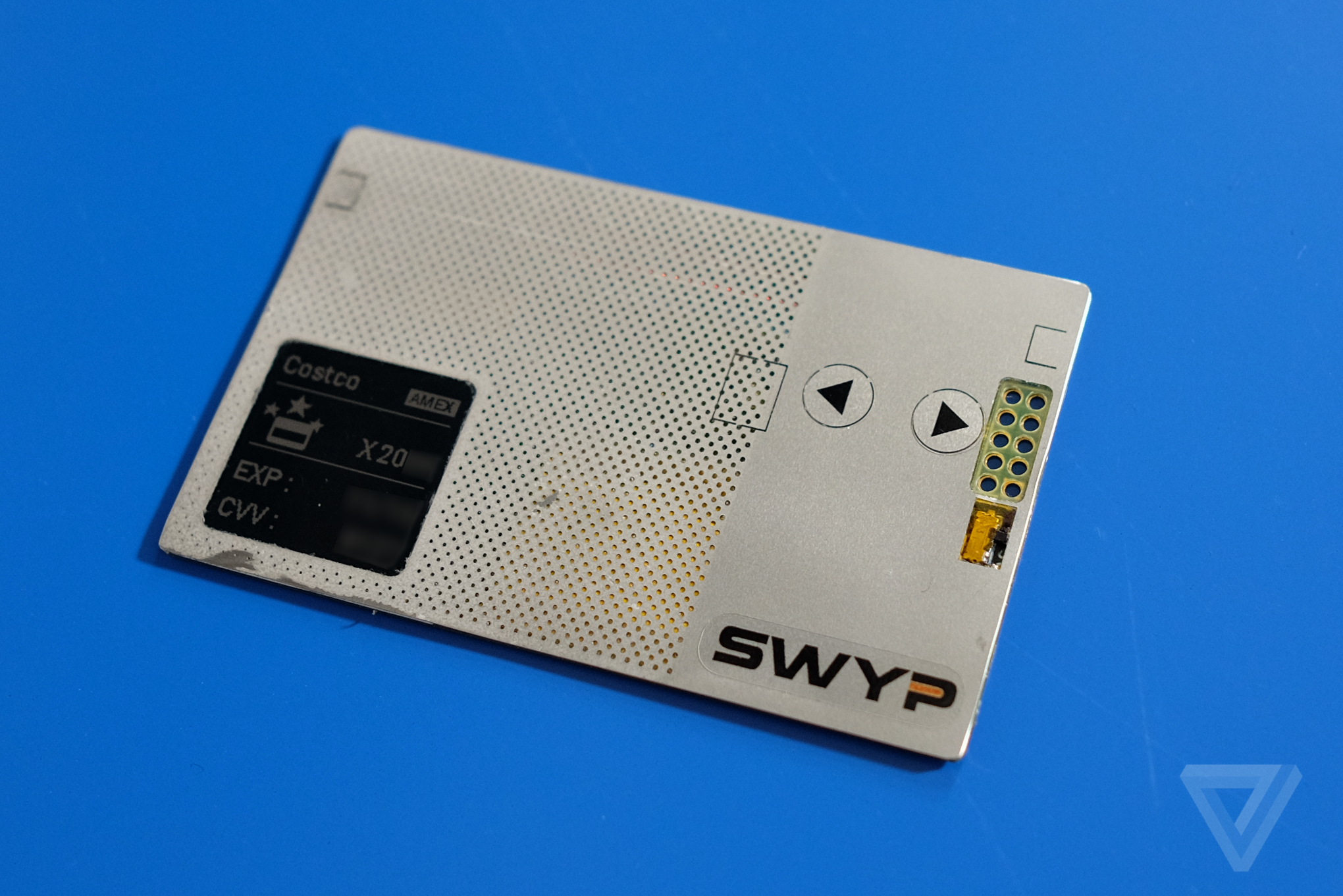 Dhodapkar declined to discuss what technology the company’s using for the screen, mainly because it could still change ahead of when the card is released. He insists that both it and the card itself can withstand the rigors of being in a purse or wallet — meaning your butt. An earlier plastic version the company developed wore out after only a few months of testing, prompting the switch to metal. Dhodapkar also says that the buttons on the front, which are clicky in this prototype but will be touch-sensitive in the final version, are currently rated for more than a million clicks.

Party in front, business in the back

While the front is very pretty, all the business happens on the backside with a magnetic strip that changes depending on what card you’ve selected. You import your existing credit and debit cards with a magnetic reader that will come with Swyp and attaches to your smartphone’s headphone jack. Using Swyp’s app, you add your cards one at a time, and they get transferred to the Swyp card using the dongle. That works for credit cards and magnetic loyalty cards. Over time, Dhodapkar says that Swyp can learn which card you typically use, or have been using most recently, then makes that the first one that comes up. The app will also act as a bookkeeper, letting you snap pictures of paper receipts for later.

If you lose your card, an automatic lock secures it from being used when it gets more than six feet away from your phone. The lock is triggered by Bluetooth and the card’s proximity to your phone, and requires entering your custom PIN code that’s entered right on the card using its directional buttons. If you’re somewhere like a restaurant, the other option is to hold one of the directional buttons for a few seconds. This locks Swyp to just that card, and also temporarily disables the proximity lock feature, meaning your card will not be useless by the time your server makes it to their own card reader. More importantly, your card number is still obfuscated, making your credit card information more difficult to steal than a normal plastic card. 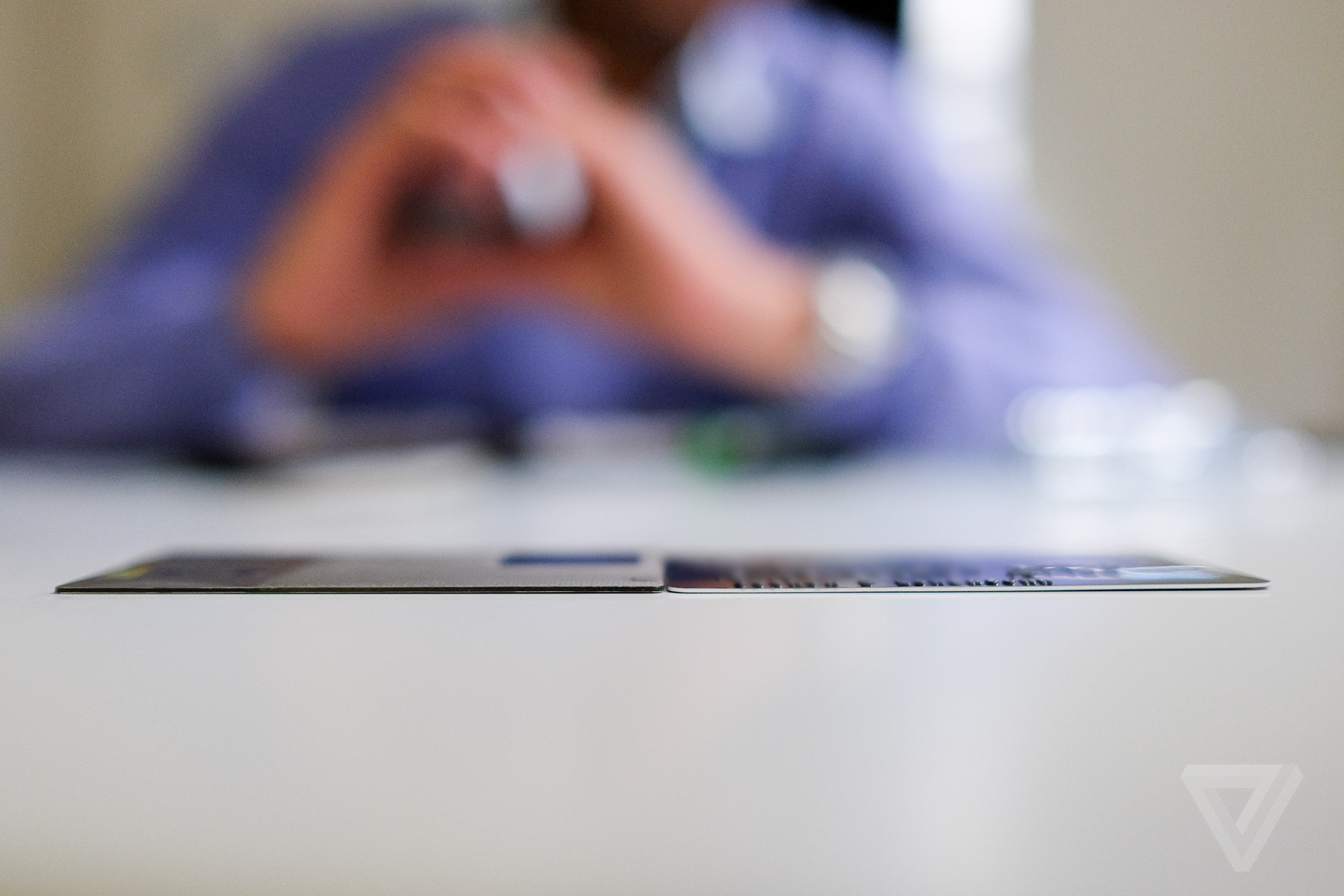 Swyp next to a standard plastic credit card.

The tools that keep your card from getting lost or stolen aren't too different from competitors Coin and Plastc, which are also in the stages of developing and testing and also plan to launch later this year. What is different about Swyp is the price, which will run just $49 during its pre-order phase, and $99 when it launches in the fall. That’s slightly less than Coin’s $100, and well below Plastc’s $155 pricing. The company also plans to make it available for free for the 1,000 to 5,000 beta testers who will test it in the real world. So far, Dhodapkar says that the test has been limited to just 10 people working on the project, who have been using it at grocery stores, auto part dealers, and barbershops.

There are some notable hardware differences between Swyp and its two closest competitors. Swyp plans to support 25 different cards on the device itself, versus Coin’s 8 and Plastc’s 20. Things you don’t get are Plastc’s features like a touchscreen, support for chip and pin security, near field communications chip (something Dhodapkar says could eventually be incorporated), or wireless charging. However Dhodapkar says that Swyp’s rechargeable internal battery is rated to run for two years before for you need to top it up. Swyp hasn’t detailed exactly how you charge the card, and there aren’t any plugs or ports on it. Plastc, which has a similar design, plans to use wireless charging on a special pad, whereas when Coin’s battery runs out, you need a new card. 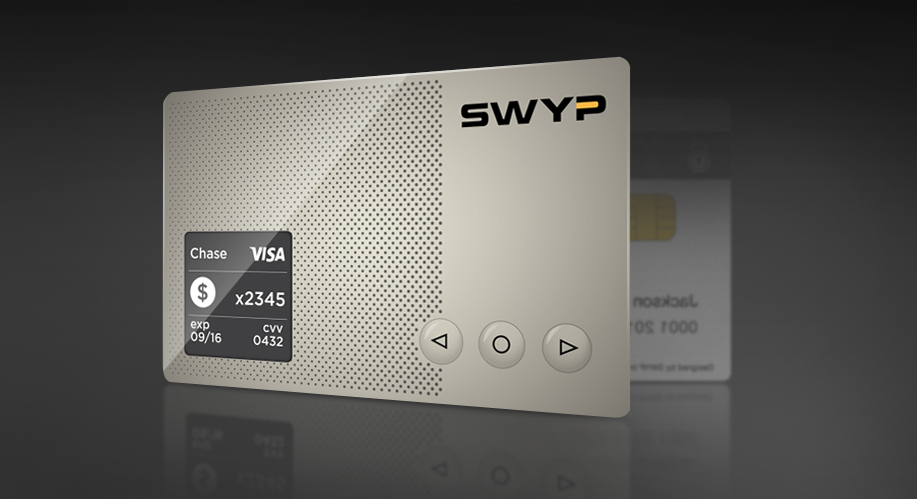 A mock-up for the finished version of the card.

The two big questions that remain for Swyp, Coin, Plastc, and any other company that may come in the future, is how attractive these cards will be over ordinary credit cards — which are reliable and don’t require batteries —and whether the advantages of electronic cards will be outdone by phone payment systems like Apple Pay and Google Wallet.

This could all be upended by your phone

Dhodapkar shrugs off the phone question saying he views phone payment systems not as potential rival, as much as a complementary technology. "It works on a small set of terminals right now," he says, adding that you can’t easily store things like gift cards unless companies have built up the support for that in Passbook, and that the dongle system Swyp is using should let it work with any credit card.

The more unknown question is reliability. In Coin’s case, that was a major issue with an early version we tested around New York a few months ago. It stopped scanning at card terminals after just 36 hours. That’s not something you worry about with plastic cards, which makes the idea of consolidating all of them into a single point of failure a risky proposition. Even Dhodapkar agrees with that, at least at this stage of Swyp’s development. "You should always have backup," he says. "I don’t want to fool the world that people should throw away your wallets."