A spider that knows how to build up electrostatic charges

There's a spider in Britain that's a tad unusual. Instead of spinning "thick" silk threads (in this case, thick means several micrometers), the garden center spider can spin tiny nano-scale threads that are also extremely sticky. This is particularly useful when catching prey, but until recently researchers didn't now how the spider managed to make such sticky silk. Now, researchers say they've figured it out: the garden center spider's silk is sticky because the spider combs and pulls at the tiny threads to charge the fibers. In other words, this spider appears to have figured out how electrostatic interactions work.

Combs out the filaments using special hairs on its hind legs

In the study, published today in Biology Letters, researchers used three different kinds of microscopy techniques to study organs that produce silk in Uloborus plumipes, the garden center spider. They also filmed the spider's spinning action to see how the organs work. They found that this species has extremely small silk glands that allow it to spin ultra-fine threads. The raw material that the spider uses to make its silk is therefore funneled through very long and narrow ducts. Moreover, the silk is only formed once it goes through the garden center spider's uniquely shaped spigots, tiny structures that make up the spider's spinnerets.

But what really caught the researchers' attention is when they realized that the spider was combing out the filaments released by the spigots onto larger core fibers using special hairs on its hind legs. These combing and pulling movements are the reason the silk adheres to the spider's prey so easily: they charge the fibers, causing them bunch up into tiny, sticky wool-like "puffs." 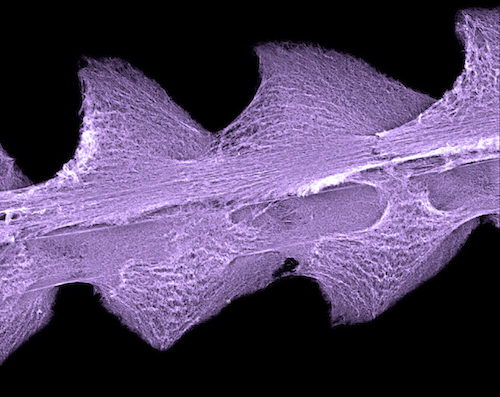 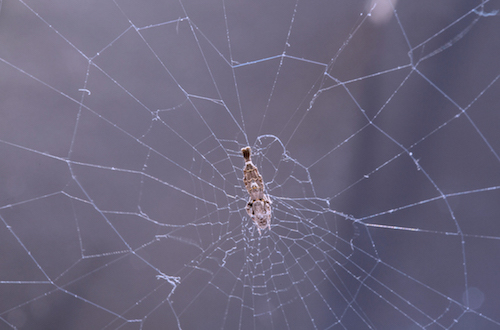 The finding could lead to new kinds of polymer-processing technologies, the researchers say. It might even help scientists come up with their own version of the super sticky nano-scale threads. But in the meantime we're getting something pretty cool out of all of this: amazingly detailed pictures of spider silk threads.