Back in 2012, feminist critic Anita Sarkeesian posted a massive wall of furious, dismissive, or actively threatening YouTube comments that people had left on her proposal for a video series about female characters in games. At the time, this harassment wasn't exactly unprecedented, but it seemed bizarre and singular — how could a fairly mild video about narrative tropes draw such pure hatred? Three years later, it's become practically routine, and Sarkeesian has posted a week's worth of equally angry and depressingly similar Twitter messages.

Obviously, this is a biased statement. A more objective reporter would concede that the entire campaign against Anita Sarkeesian could be an elaborate charade, a brilliant gambit involving hundreds of paid-off vloggers, thousands of fake Twitter accounts, and collaboration at the very top levels of the FBI and various state police forces. She could even be faking the wave of people who descend on our writers every time they mention Anita Sarkeesian! But maybe, hidden behind the exhortations to "kill yourself," the explicit rape threats, and the occasional smug assertion that the whole thing is a false flag campaign, there are actual human beings.

As it turns out, some of the most direct threats come from throwaway accounts, or ones that have been suspended. But some of them are extant, long-running feeds from people who... well, it's hard to say that they have regular lives, or passions, because their timelines are mostly just racist or homophobic jokes and insults. But if you trawl deep enough, little pieces of normality peek out. And it makes everything all the more frustrating.

Here's a pretty mild one: 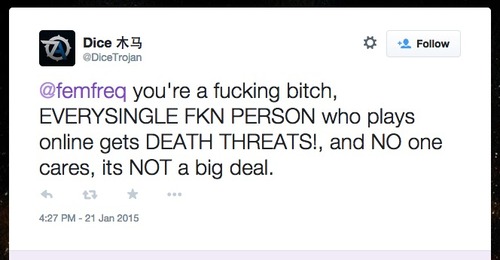 DiceTrojan has a very important mission: preserving the noble institution of internet death threats. But he also enjoyed a winter vacation, just like the rest of us.

But he's experienced his own share of oppression at the hands of girl gamers.

Now we're back to the intentionally non-actionable death wishes, courtesy of Johnatan Irons:

"I personally dont [sic] have any thing against her (im just a troll)," he explains. We imagine his girlfriend understands, unless she's also just a figment of his trolling.

It's hard to find anything but hatred in these timelines, some of which span years and thousands of tweets. 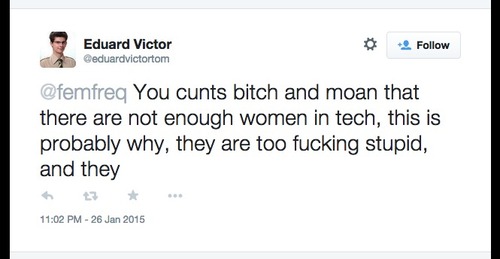 But sometimes you find out they had the same reaction to Gravity as you did. For once, they unabashedly, unmaliciously liked something.

Maybe we've walked by some of these people on the street? Maybe we sat a few tables over at a restaurant, while they were typing something like this?

How much of it is just an act? How much does it actually matter? How much empathy should we feel when we read something that genuinely seems like a cry for help, when the entire premise of modern-day trolling is that the internet is just a giant game of make-believe, and you're a fool to do more than point and laugh? 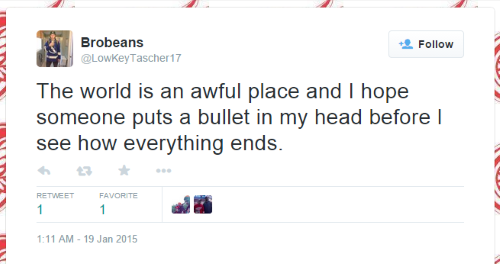 None of this is encouraging, especially when you know that just mentioning it puts you in the crosshairs, too. It doesn't prove that there's some hidden decency to reach or some way to impose offline consequences (I haven't looked up anything about these people's real identities, and I don't plan to.) It doesn't prove anything about what kind of person does this, because someone's web presence doesn't necessarily indicate much about their everyday lives. All it proves is that this isn't some barrage of throwaway insults in a vacuum. Given enough time, whether it's created out of deep resentment or teenage thoughtlessness or deliberate, sociopathic calculation, even the most one-dimensional troll mask can start to come alive.

More from this stream Gamergate: a misogynist harassment campaign disguised as consumer revolt