In early 2011, Montreal resident Sandra Bagaria began an online relationship with Amina Arraf, a pretty, American-born Syrian woman who was passionate, outspoken, and gay in a country where homosexual activity is illegal. As the revolution intensified in Syria and neighboring countries, so did their relationship, and Amina's blog — A Gay Girl In Damascus — gained international attention.

But then Amina goes missing and Sandra — and the rest of the world — begin to learn the truth of her identity. The Amina Profile, a documentary by Canadian filmmaker Sophie Deraspe premiering at this year's Sundance Film Festival, follows that investigation. Deraspe's film uses the sheer bizarreness of the story as a means to talk about sensationalism, stereotypes, and the shortcomings of both old and new media in the midst of an unprecedented revolution.

Sophie, tell me a little bit about how you came to know Sandra and began to uncover this story.

Sophie: I knew Sandra before [I began the documentary], so I was aware that she had met this amazing Syrian American woman. We weren't close friends, so I wasn't aware of the level of intimacy. But I knew her, so I was aware of the online dating, and Amina starting the blog, and then the abduction and the investigation into who was behind Amina. But I have to say, I think if I had not been a friend [I wouldn't have known] — because I remember having heard on the news only a few glimpses. And that's what we were hearing from people, that they kind of heard about Amina, but they don't know the story, to the extent that we present in the film. It rings a bell to many people, but not much more than that.

"It just felt right to be attracted to Amina."

Sandra, when you began talking with Amina, how much did her involvement with the Syrian revolution impact your emotional investment in the relationship?

Sandra: Well, most of my friends [nicknamed] me "Marjane," the illustrator of Persepolis. It's a graphic novel about a young girl who was raised in Tehran, and she's always outspoken and always wants to have a revolution. And for me, meeting someone who fit that profile was very exciting. She was standing up for her beliefs, and she was really fearless. And that was like, "Oh my god, this is crazy beautiful," you know? It adds a sexy value to the profile of the person. I am a very curious person, and I was always interested in the Middle East, [partly because of] my family's roots there. It just felt right to be attracted to Amina.

An image from a Facebook campaign that formed after Amina's supposed abduction.

But throughout the relationship, even as it got very intimate, you never were able to use video to communicate?

Sandra: No. Skype was blocked in Syria, and in some parts more than others. So for me, it totally made sense that we couldn't Skype.

Sophie: Sandra gave me all her archives with Amina. She did not want to go through it all again. But I read it all, and you know, now she may seem pretty naïve, since she conducted this six-month-long relationship without having actually heard a voice or seen an image on video. But it all made sense when the uprising started and the country was under this dictatorship.

And Sandra tried a lot of times to reach Amina in different ways, but Amina was very clever in always adding a new chapter in her adventure, her story. So let's say Sandra finally got a phone number to phone Amina. Amina says "Okay, you can call me tonight, I'll be home." She calls, but there's someone [she doesn't know] speaking Arabic on the other end. She hangs up, writes "hey I tried to call you, but I don't know who it was," and Amina just says "I had to escape Damascus, the secret police came for me, and now I'm hiding in a village." Things like that. 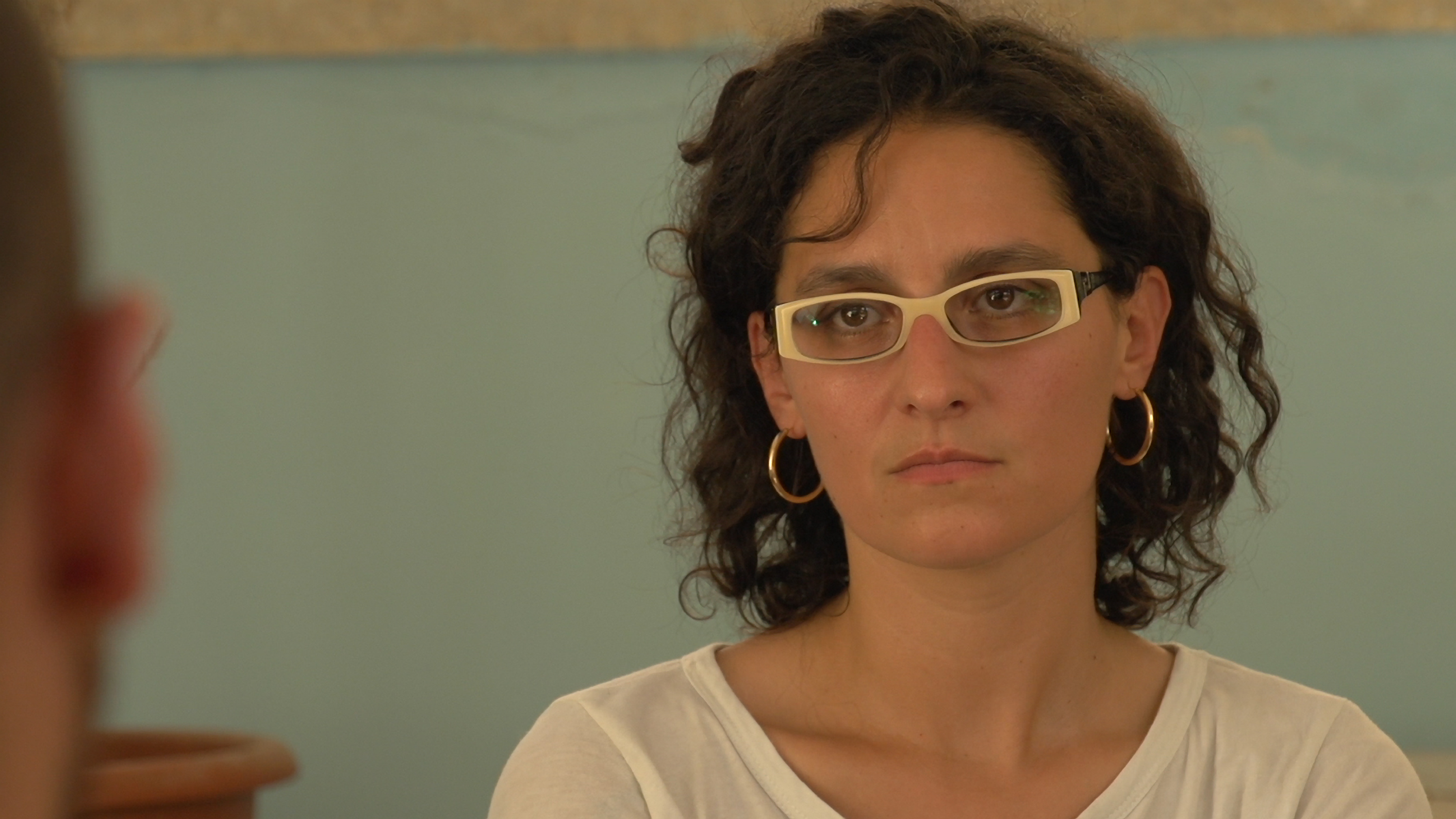 Sandra Bagaria in The Amina Profile.

How many times did that happen?

Sandra: With the phone number? Only once.

Sandra: In all honesty, I had doubts. But when a big international publication like The Guardian said that they had met Amina and conducted an interview, my doubts were washed away. I was like, okay, someone met her —

Sophie: Someone can vouch for her.

It speaks to our knee-jerk trust in old media organizations, even in a new media world. We see a headline in The Guardian, or The New York Times, and we never think to question it.

Sophie: Exactly. And it wasn't only Sandra who trusted The Guardian, but so many journalists from around the world who didn't fact check the story.

Sandra: So for me it was like, okay, I had doubts, but maybe I shouldn't have doubts.

Sophie: And you begin to feel bad when you have doubts about a person who is going through so much.

Sandra: And you don't exactly know the dynamic, because you're not under siege, you're not at war. So the Guardian post made it easy for me to keep on believing.

"YOU BEGIN TO FEEL BAD ABOUT DOUBTING A PERSON WHO IS GOING THROUGH SO MUCH."

The Arab Spring is often referred to as the first revolutionary movement aided by social media. That's usually seen as a positive thing — young people using modern technology to incite social change — but this story also shows some of the drawbacks of so much unvetted information being out there for public consumption.

Sophie: Well, we were first misled by traditional media, even if Amina was operating with social media for her personal relationship as well as her blog. We're not demonizing social media. It's there, it's useful for a lot of people, and in the film we show how important it was for Syrian activists, and also how necessary it is for them to hide their identity.

It has always been the case, even before social media, that some sources have to stay anonymous. But there always is a way of proving that the source is credible. With social media it should be the same. But it takes time, and the thing is that today we want the news out very, very quickly. Not only in social media, but in traditional media as well — they don't want to be behind. I guess they feel they are already behind social media, so they're trying to keep the pace.

After the break, Sophie, Sandra and I discuss the conclusion of The Amina Profile. It's a spoiler for the film, but it was also in news in 2011. Either way, you have been warned. 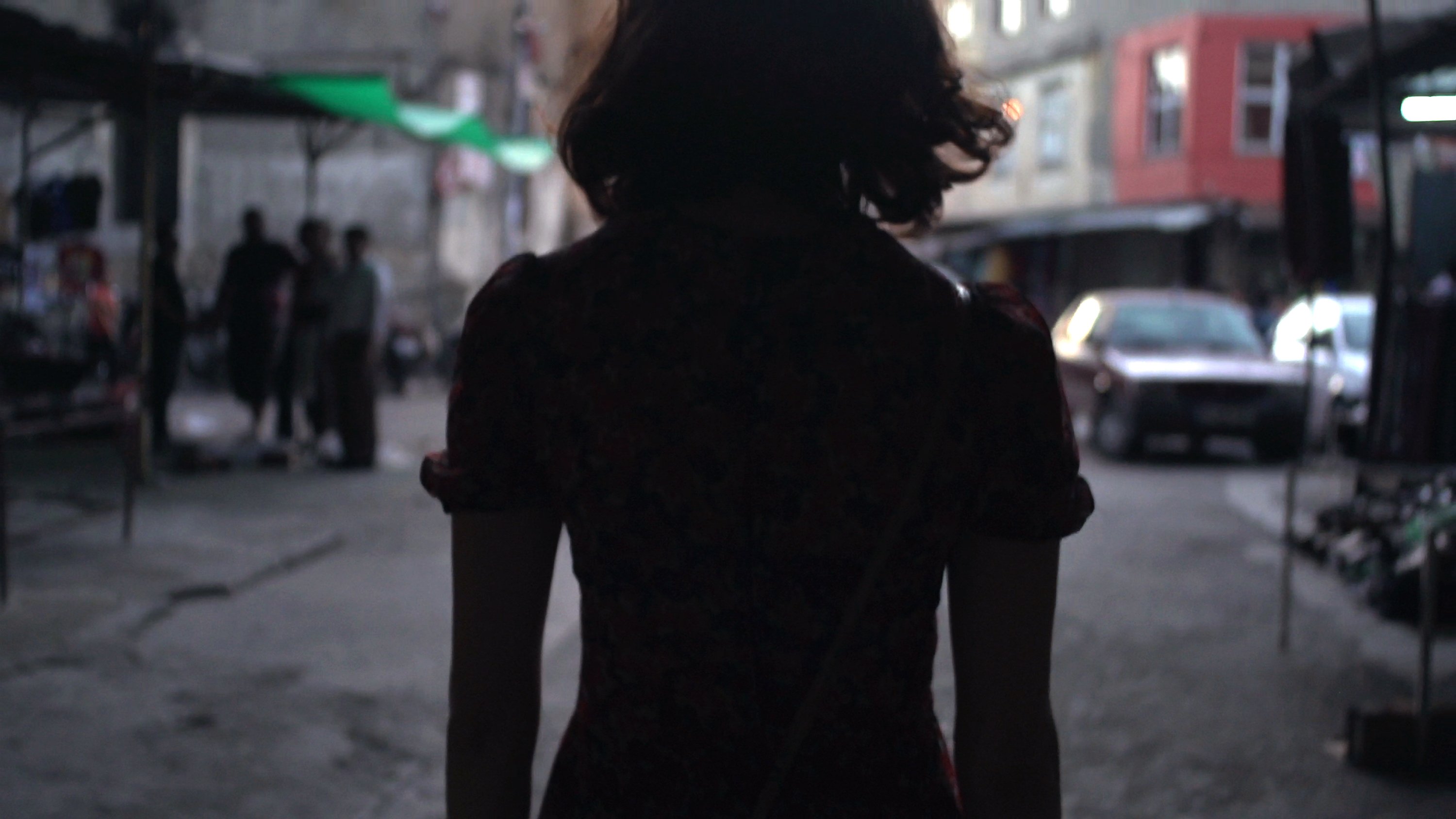 I do want to talk about Tom McMasters, the American graduate student who is ultimately revealed to be behind Amina's online persona. To me, there was something fascinating about a white straight male using the identity of a gay Syrian woman to feel heard, or important, in the midst of this revolution.

Sophie: It's fascinating because it has many levels. He wanted a voice, to be listened to — because he had opinions about Syria, about the Middle East. And he had extraordinary timing in starting a blog just a few weeks before the first uprisings in Syria. But then there's this intimate relationship he conducted [with Sandra] as a lesbian. So it's not only a way to find a voice, it's more complex than that.

Social media has allowed a lot of people who feel that they don't have mainstream sexuality or a mainstream opinion, to find other people like them, and that is great. But in this case, there's a lot we can [potentially] extrapolate. I don't know if he's uncomfortable in his male body; or if he is, and he's just exploiting female sexuality. Or if he is somehow uncomfortable as an American male. I don't know.

What was your impression, Sandra, when you finally confronted him?

Sandra: Well, you know, there was apprehension. You see in the documentary — I was crying, I was super upset, and crying for him, in a way. Because I had given him so much of myself already, I [had been] totally transparent. But I have to say that the apprehension, the anxiety of meeting someone you don't know — because it's not really the same person — as soon as the door opened and I actually met him, I relaxed. I was just like, okay, now is my time to have this interview on my own terms. I was controlling the situation, which felt very good because [at that point] I had totally lost control of the situation.

In the documentary, we left the door open for any perception, any judgement that the public could have. Because I have my own, and Sophie has her own, but it was important for us to just leave it up to the audience to [choose to] understand or not understand what he did. But for me, I got what I was looking for. And I'm going to move on.

There have obviously been multiple high-profile incidents like this in the past couple years — Manti Te'o, the popularity of MTV's Catfish. Why do you think this story in particular needs to be told — what can we learn from it?

Sophie: Well, [in The Amina Profile,] not only one person was fooled. Many people were — many educated people, many people who know about the world and the media. So there's a synchronicity that is pretty amazing and raises issues in our contemporary world about online identity and media coverage. And how Syrians do need a voice and maybe don't get the representation from the media that they are supposed to get. So it starts at a very intimate level and it goes to a very broad, sociopolitical level. It's kind of amazing to have that all in one story.

"Amina is a mirror of our own perception and fantasies."

Sandra: It's a very different story from Catfish, because it's showing us our weaknesses for cliché. The media, myself, and other people were fooled because it was such a perfect formula. We were like, "Oh, this seems beautiful, let's [follow this story]." It's really about how we in Western countries perceive the Middle East, and stereotypes that we all have that we should totally revise.

Sophie: The film is constructed and conducted in a way so that the viewer would experience the fantasy that we shared, the fantasy that started between Sandra and Amina, but then that was spread and shared [across the internet.] This fantasy of a woman — a cute, outspoken lesbian, in a country where women are supposed to be covered and submissive. Amina is a mirror of our own perception and fantasies, and how exotic and unknown the Middle East still is for many of us.