In 2002, fishermen off the Oregon coast pulled up their traps to find them full of dead crabs. Baby octopuses were climbing up their lines, seemingly struggling to get out of the deep. "In 30 years of crabbing, I'd never seen anything like it before," a fisherman told the Los Angeles Times. "It's spooky, this dead-zone thing."

The crabs had suffocated, caught by a sudden influx of low-oxygen water. The dead zone has reappeared every year since, expanding to cover an area the size of Rhode Island in 2006. Researchers have long suspected dead zones like Oregon’s are linked to climate change. Something in the system of ocean currents and wind patterns had shifted, creating a deadly new normal, and it had happened suddenly. 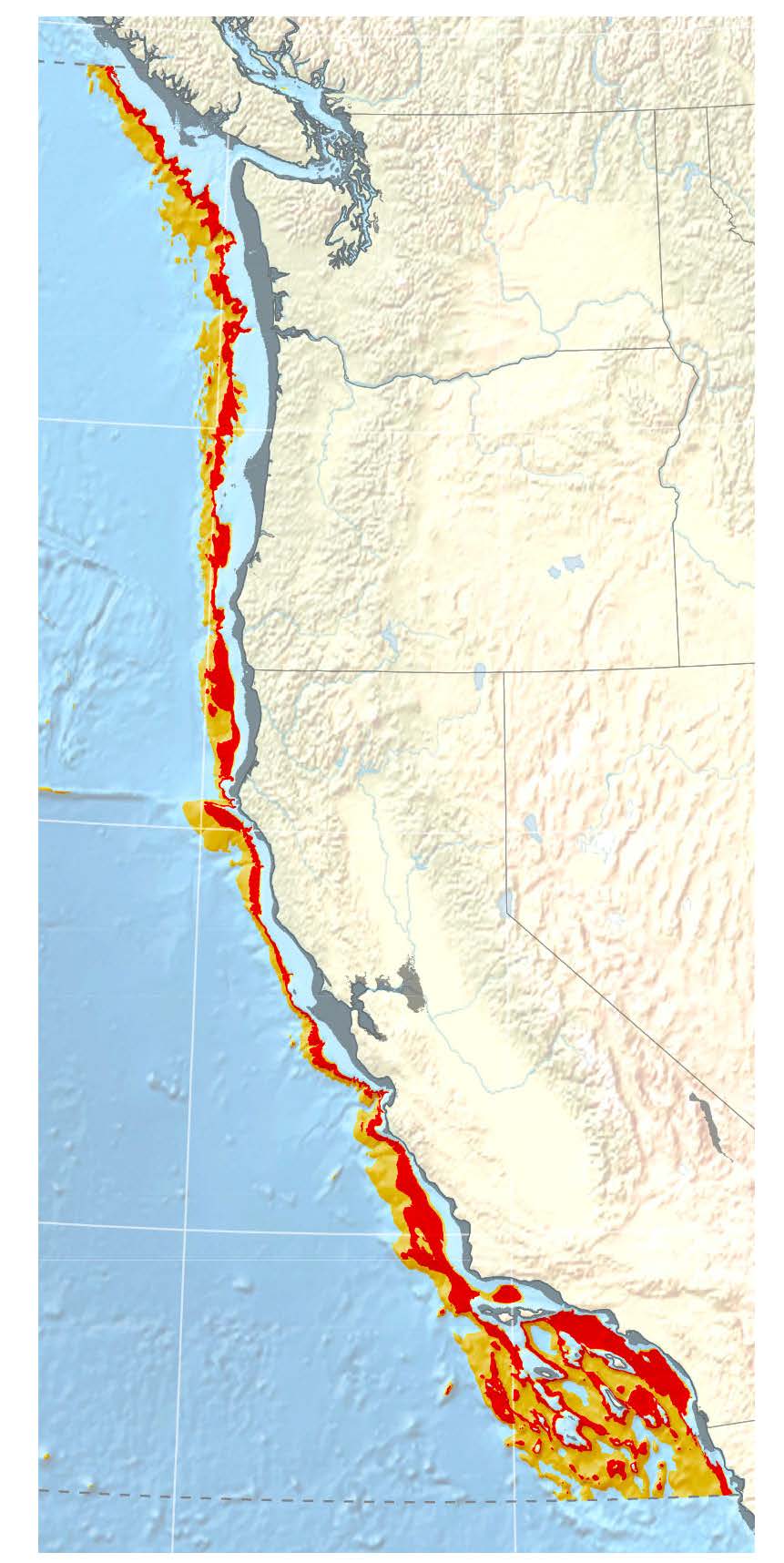 This map of the California Current shows the extent of the low-oxygen seafloor. Yellow indicates intermediate hypoxia, while red zones are areas of severe oxygen loss. UC Davis

A study out today in PLOS One gives an idea of just how widespread — and how sudden — these shifts can be. Researchers reconstructed the state of seawater as the ice sheets melted roughly 10,000-17,000 years ago, a period of climate change with parallels to our own, by using ocean sediment taken from locations between Chile and the Gulf of Alaska. The scientists found evidence of extreme oxygen loss all along the Pacific coast. More alarming, they found that it happened fast — in some cases, in less than 100 years.

"We were definitely struck by the rate, by how fast these changes happen," says Sarah Moffitt, a researcher at the UC Davis Bodega Marine Laboratory and lead author of the paper.

Low-oxygen zones occur naturally in certain parts of the ocean, often some of the most productive for fisheries, as a side effect of nutrient-rich water coming to the surface. In Oregon, for instance, summer winds push warm, oxygen-rich surface water offshore, and cold, fertile, but oxygen-starved water cycles up from the deep to take its place. It’s a process called upwelling, and like rotating compost, it brings a wealth of nutrients to the surface; those nutrients feed phytoplankton, which in turn feed fish and crabs. When the phytoplankton die, they sink and decay, creating areas of low oxygen farther down in the water column. But in recent years, these low-oxygen zones have been getting bigger, more intense, and creeping closer to shore.

"It’s a natural feature of upwelling zones," Moffitt says. "But this investigation showed that it’s extremely responsive to abrupt climate change. The capacity for these zones to expand vertically and geographically is very extreme."

Expansion of a dead zone in the Pacific Northwest. PISCO/OSU

The relationship between climate change and dead zones is complex. When seawater gets warmer, it holds less dissolved oxygen. Layers of ocean water also become more stratified, and it gets harder for oxygen-rich surface layers to mix with deeper water. Warming at the poles affects the formation of deepwater currents that move water around the Pacific. Changing wind patterns on land affect how often upwelling occurs.

Though the exact mechanism driving dead zone expansion is unclear, studies show that it’s happening and will likely increase. One model predicts a 50 percent increase in low-oxygen water by the end of the century. As the zones spread, they reduce the number of habitats for many of the sea creatures we eat.

"These systems have the capacity to be very unstable when you poke the climate system with a sharp stick."

The disconcerting thing about Moffitt’s study is that it shows how quickly these changes can happen. Most policy discussions about climate change are conducted in terms of estimates and averages — 3 feet of sea level rise, 170 percent increase in ocean acidity — but what we’re dealing with are complex interlocking systems with tipping points and feedback loops we barely understand.

"It’s not just about temperature," says Moffitt. "It’s about disrupting fundamental earth processes that we as humans have understood to be very stable. They’re not stable. These systems have the capacity to be very unstable when you poke climate system with a sharp stick."