The G Flex 2 is the first great curved smartphone

The screen is smaller, the curve is subtler, and the specs are just right

The G Flex 2 is LG's second curved Android smartphone. Introduced at CES 2015 today, it blends the heritage of the original G Flex with the all-new Snapdragon 810 processor and some of the best aspects of LG’s G3 flagship to produce an excellent new phone.

Curved phones are still in the "rebel without a cause" phase of their development. They are different, but haven’t yet figured out a compelling reason to be different. That doesn’t change with the G Flex 2. LG’s Dr. Ramchan Woo, the company’s mobile architect responsible for the new G Flex, argues that all design tends to start with straight lines and rectangles, because they’re easy to make, before proceeding to the more natural and organic feel of flowing curved lines. Making curves is hard, whether you’re talking about cars, architecture, or home appliances, but doing it is worth it for LG because of the better aesthetics and ergonomics. "Why curved again?," asks Woo. "Our biggest and simplest answer is it’s more beautiful."

You don’t have to agree with Ramchan Woo’s thesis about the inevitability of curves to appreciate how much of an improvement the G Flex 2 is over the original G Flex. The number one complaint LG received about its first curved smartphone was that, at 6 inches in size, "that’s too big." People just couldn’t get to grips with such an awkward beast, and many of them were also unhappy to see it only had 720p resolution in an age where much smaller phones could comfortably accommodate 1080p and above. Now, with an improved generation of its plastic OLED technology, LG’s stepped up to the 1080p resolution and, crucially, stepped down in size class to 5.5 inches. The Korean company has also reduced the overall curve of the phone so that now it’s a gentle bend instead of the aggressive crescent shape of the original. This combination of more compact dimensions, better and smaller screen, and subtler curvature combines to make the G Flex 2 a much nicer phone to hold and to use than its predecessor.

Where the G Flex was big and awkward, the G Flex 2 is gentle and comfortable

Another improvement from the original G Flex is the second generation of LG’s self-healing plastic case. It now recovers from scratches and bruises in less than 10 seconds. The rear cover is super shiny and reflective in both the Flamenco Red and Platinum Silver options, but it’s an unusually nice sort of glossy surface. Yes, LG’s new phone is made out of glossy plastic, but I’m really alright with that. It doesn’t collect fingerprints easily and its ostentatious shine is rather in keeping with LG’s effort to present the G Flex 2 as a premium-class smartphone with a bit of added pizzazz. The G Flex 2 will be priced higher than the G3 and whatever successor to the G3 LG is planning for later this year, making it a niche higher-end device, much like the original. The big difference is that this phone is really rather good. 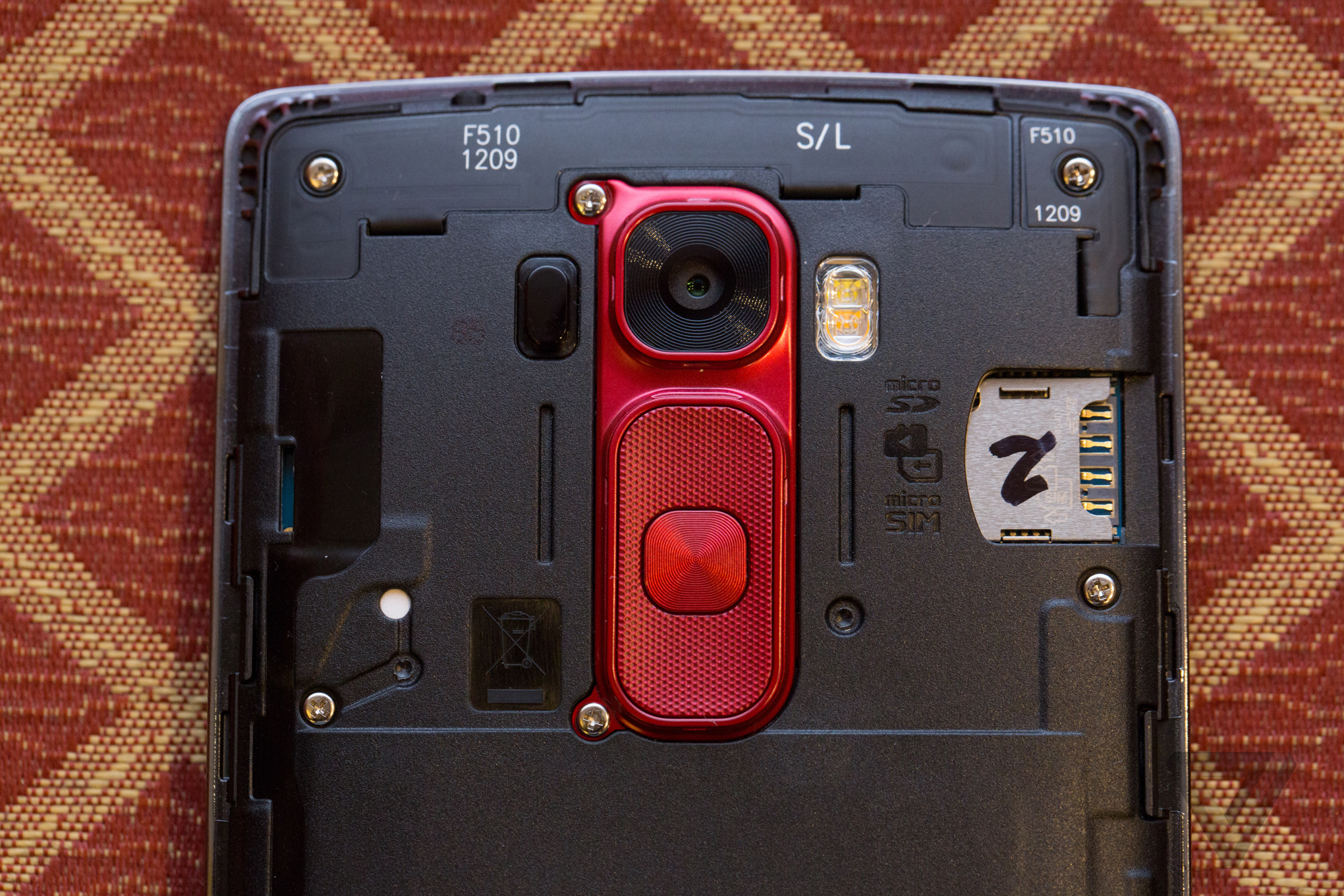 LG’s internal engineering team has made the G Flex 2 more shock-resistant and durable than the original. Though it feels stiffer in the hand, the Flex 2 is actually more elastic internally and distributes the shock from drops or pressure more evenly across its body. I asked Ramchan Woo if it’s designed to flex, to which he responded by throwing his G Flex 2 on the floor and stepping on it. "You can even sit on it," he said before vigorously demonstrating that very action multiple times over. I later put his word to the test by trying to crush the Flex 2 with my fist, stepping on it, and throwing it up to a height of 20 feet in the air. Admittedly, it was landing on a soft carpet rather than unforgiving concrete, but none of these extreme tests made even a dent in the Flex 2. LG’s even gone so far as to take Gorilla Glass 3 from Corning and give it a special chemical treatment that the company says makes it 20 percent stronger and more durable. LG calls this Dura-Guard Glass and points out that it’s a particular improvement at the edges of the screen, which is where Gorilla Glass’ durability is apparently not as great as at the center.

"You can even sit on it," he said before vigorously demonstrating the action

The display itself is also very pleasing to the eye. I was never convinced that LG’s G3 needed a Quad HD resolution and the G Flex 2 reiterates the point: this new phone looks just as good, if not better, than its fellow 5.5-inch brandmate. 1080p resolution and the deep beautiful blacks of OLED make for vibrant, strong imagery whatever you’re looking at, and LG’s also added a slide-down motion on the lock screen that will show you the latest notifications without activating the full screen.

All of this would be meaningless without a solid software foundation and LG’s using the best around with Google’s Android 5 Lollipop. The interface retains LG’s cosmetic modifications from the original UI first introduced on the Android 4.4-powered G3, but that already cleaned up and simplified a lot of things in LG’s skin, essentially preempting the improvements of Lollipop. I saw some occasional slowdown and stuttering animations, but these are pre-production units and I’ve no doubt the Snapdragon 810 powering the Flex 2 will be more than capable of presenting Android in its best light.

More than the sum of its curves

The specs of the G Flex 2 are similar to those of the G3: it has the same screen size and the same 3,000mAh battery (though in this case it’s not removable), 2GB or 3GB of RAM, 16GB or 32GB of storage and the option to expand it via microSD. The camera is also the same 13-megapixel sensor as in the G3, though it comes with improved software and some further hardware optimizations. The laser-guided autofocus system and optical image stabilization are also both here, together with a new dual-LED flash that helps to provide more natural tones in photos that require it. NFC, Bluetooth 4.1, 802.11ac, and the latest tri-band carrier aggregation LTE complete the connectivity picture and a typically formidable spec sheet for LG. I remain impressed with the company’s restraint, though, in making this phone smaller and even admitting that the original 3,500mAh battery in the G Flex was "too big." Its absence is more than made up for with the lighter and more ergonomic device on show today.

As impressed as I am with the G Flex 2, I don’t think it provides a conclusive answer for why it must be curved. But LG isn’t pushing it on the credentials of its curvature. The vertical curve is just one of many around this new phone, all of them designed to work in concert to make for a more comfortable and attractive device. That’s the area where I think LG is really starting to improve: it’s making better and more desirable phones and putting their physical properties to good use. The curve may always feel like something of a gimmick, but the G Flex 2 has a lot of other things going for it.

LG’s G Flex 2 will go on sale in its native Korea by the end of this month, which will be followed quickly by availability around the world. It’s a niche device that will cost more than LG’s flagship phone — and certainly won’t be looking to replace it — but it matches its premium aspirations with some extreme durability and an aesthetic that will prove appealing to many.