Scientists have finally sequenced the genome of a large whale, and it could help humans live longer

Unlike most mammals, the bowhead whale can live well past the age of 200, yet we know very little about how it lives so long without experiencing many of the lethal diseases that humans often go through as they age. Now, researchers have sequenced the entire genome of the 66-foot bowhead whale — a step that might finally yield some answers regarding its amazing longevity. Their results, published today in Cell Reports, represent the first time that a large whale’s genome has been fully sequenced.

the bowhead is the first big whale to be sequenced.

"We discovered changes in bowhead genes related to cell cycle, DNA repair, cancer, and aging," relative to other species of whales, says Joao Pedro de Magalhaes, a co-author of the study and a geneticist at the University of Liverpool, in the UK.

In the study, the researchers chopped samples of bowhead whale DNA into 4 billion tiny pieces, called nucleotides. Then, they sequenced each of those DNA segments. Powerful computers then put the sequences together, "like a massive jigsaw puzzle," explains de Magalhaes. Finally, the researchers compared the resulting sequence to other whale genomes, like that of the smaller minke whale and the orca whale. Thanks to these comparisons, the scientists found alterations in key genes that might be biologically relevant to aging and cancer. 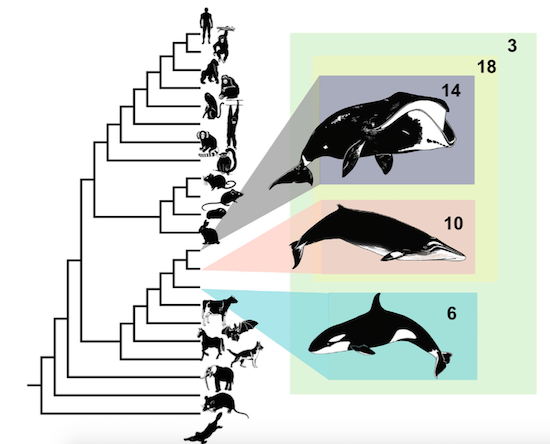 "Our understanding of species differences in longevity is very poor," says de Magalhaes. "Thus, our findings provide novel candidate genes for future studies" that may play a role in the "exceptional longevity and disease resistance of these animals." But more research will have to take place before scientists can say whether these alterations play a role in keeping the bowhead whale healthy.

"[The research] is sound," says Jong Bhak, a whale geneticist at Ulsan National Institute of Science and Technology in South Korea who didn’t participate in the study. Soon, Bhak says, more scientists will do this kind of comparative genome analyses. "Whales are perhaps the most interesting genomes to study as they went through really severe environmental adaptations among mammals," because they went from from living a terrestrial life to an aquatic one, he says. And "genomics is perhaps the first such an automated way of pinpointing exact aging associated mutations in such a short time."

The genome might help understand the population dynamics of this species, de Magalhaes says, and help estimate the effect of hunting on these animals. But the aging-related findings are what he finds more interesting. "By identifying novel maintenance and repair mechanisms we hope to learn what is the secret for living longer, healthier lives," he says. "[We] may be able apply this knowledge to improve human health and preserve human life."

Now that the researchers have the sequence in hand, de Magalhaes and his team of researchers hope to use that information to create mice with bowhead whale genes. "Mouse studies, I think, would be ideal to determine if these genes emerging from the bowhead genome can protect against age-related diseases or even promote longevity," he says.

The authors of the study aren’t sure why it has taken so long to sequence the genome of a large whale, but de Magalhaes thinks that the availability of genetic material samples might have something to do with the delay. "Obtaining samples," he says, "was not easy and costs were also very high." But recent improvements in sequencing technology have made sequencing large genomes far cheaper. "I expect many more whale genomes — and of other species of course — to be sequenced in the next few years."