You can always find weirdly high-tech appliances at CES, be it a washing machine that receives text messages or a refrigerator with a tablet grafted onto it. But you can also find some of the strangest versions of everyday appliances, too. And this year, the strangest are definitely at LG's booth.

The appliance that attracted the biggest crowd was easily LG's Twin Wash washing machine. It's mostly just a normal washing machine, but on the bottom there's a second miniature washing machine. LG's idea is that you can put in two loads at once to save time or use the mini washer for a small number of delicates that you want to put on a different cycle. The bottom machine uses less water and takes less time, too, so it could be good for a quick load. The Twin Wash will ship this spring, with pricing expected to be around $600 or so.

Easily the most excessive appliance innovation that's on show at LG's booth is a refrigerator with six doors, two of which are hidden behind other doors. LG says that it invented the door-within-a-door concept, and that the design has quickly spread through the industry (you can already find plenty of fridges from other manufacturers with a single door-within-a-door). Now, not interested in being disrupted, LG is going all out with a double door-in-door. To break this down: there are two freezer doors on the bottom of the fridge. On top, there are two doors in front of the fridge area. Opening those will reveal two additional doors that double as storage shelves. Opening those finally grants you access to the fridge. If you find yourself buying too many groceries, or if you just love forgetting about perishables hidden in your fridge, this is definitely for you. (Just be warned: it may have six doors, but it doesn't have a water dispenser.)

The most interesting appliance that LG had on show was the second generation of its Styler cleaning system. It's essentially a narrow closet that can store and clean dress jackets and pants. LG says that the styler basically does a dry cleaning process without chemicals — it'll steam your clothing to kill smells and bacteria and hopefully leave them free of wrinkles. Which sounds awesome. The new version is a bit narrower (the photo above depicts two units side-by-side) and is supposed to be more affordable than the original model (though LG hasn't announced its specific price just yet). It's also made the Styler's controls look way more futuristic, as turning the machine on makes options start glowing out of its black door. The Styler also pairs with an LG app that can be used to select more specific cleaning settings or determine what's broken in the machine should something go wrong. 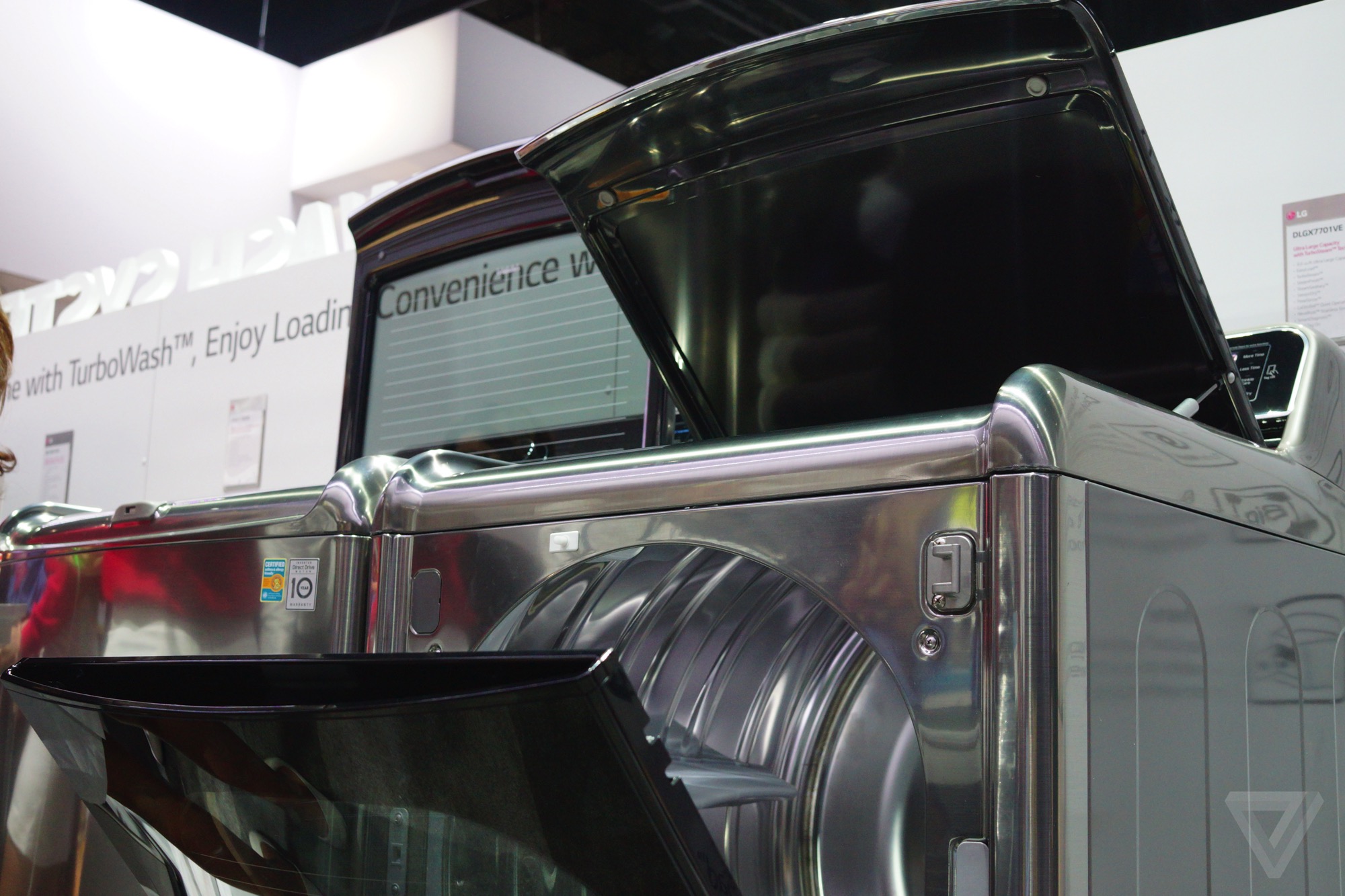 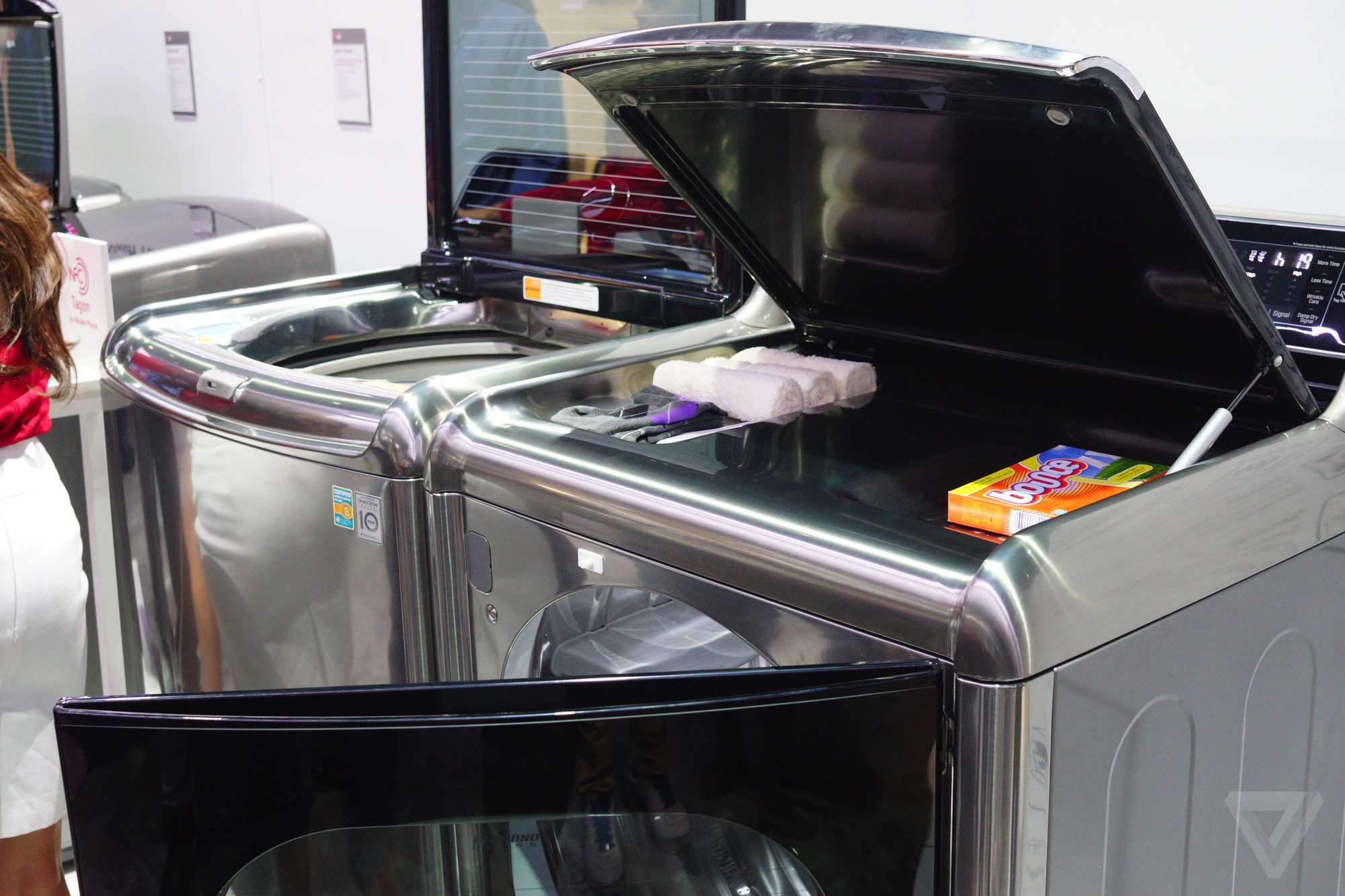 Continuing its innovations with doors, LG also has on show this year a dryer with a door that can open in two different directions. Grabbing the door from the top, you can either swing it open to the side or you can pull it open toward you. LG thinks that you'll want to open the door toward you while loading the dryer, allowing clothing to easily slide in. Opening the door to the side, LG thinks, makes more sense for unloading. We've been living just fine for decades with only uni-directional doors, so it's hard to say that this is truly helpful. That said, it certainly is a convenience, however slight.

LG plans to ship all of these in the next quarter or two, though it hasn't set prices on most of them yet. As crazy and unnecessary as many of these things are, they're definitely useful — and if you see them while shopping, you're probably going to be at least a little tempted to get one for your home.