LG announced the new V10 smartphone late last night, and we just got our first close look at the brand new device here in New York. It's the first phone in a new series of "V" phones, and it comes with a fairly new design. Gone are the curved displays that the company has been pushing over the last year, and in their place is a bonafide 5.7-inch phablet. It's the spiritual successor to LG's G Pro series, and there's a host of reasons why LG thinks this could be the perfect phone for people who need to do more with their device than the average user.

The two things that stand out the most about the V10 sit right at the top of the phone. The first are its two front-facing cameras, which sit way off to the left side of the device. These won't shoot in 3D, or be used for face tracking like we saw with the Fire Phone. Instead, each of the two selfie cameras has a completely different field of view — one is set at a wide 120 degrees, while the other is a relatively narrow 80 degrees. You can toggle between the two in the camera app, or switch on a setting that takes simultaneous images with both. The two 5-megapixel cameras and their different views should help you never need to use a selfie stick again, according to LG — a nice sentiment that will probably never materialize. 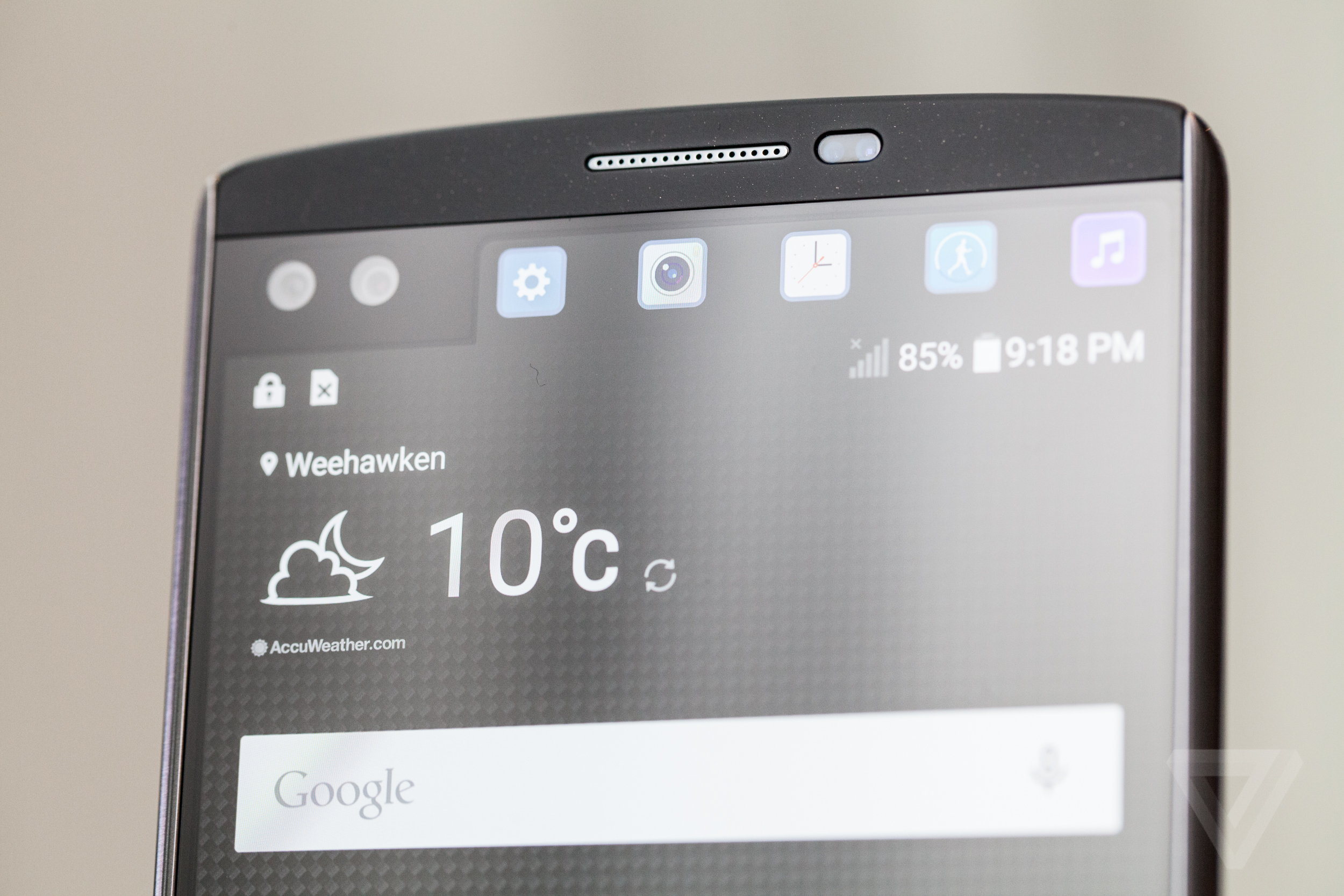 The other is what LG calls a "second screen." Just to the right of those cameras is a 1040 x 160 display that is connected to the main display. (It's really less of a "second screen" than a 5.9-inch display that's been trimmed to fit the two front-facing cameras.) It works a lot like Samsung's "Edge screen." It's always on, which LG says will drain less than 5 percent of your battery during a full day's use. You can use it for quick access to contacts, app switching, to toggle the Wi-Fi on and off, turn the flashlight on, control your music, and more. And the second screen will even offer specific controls inside certain apps; for example, you can use it to change modes or zoom in the camera app. 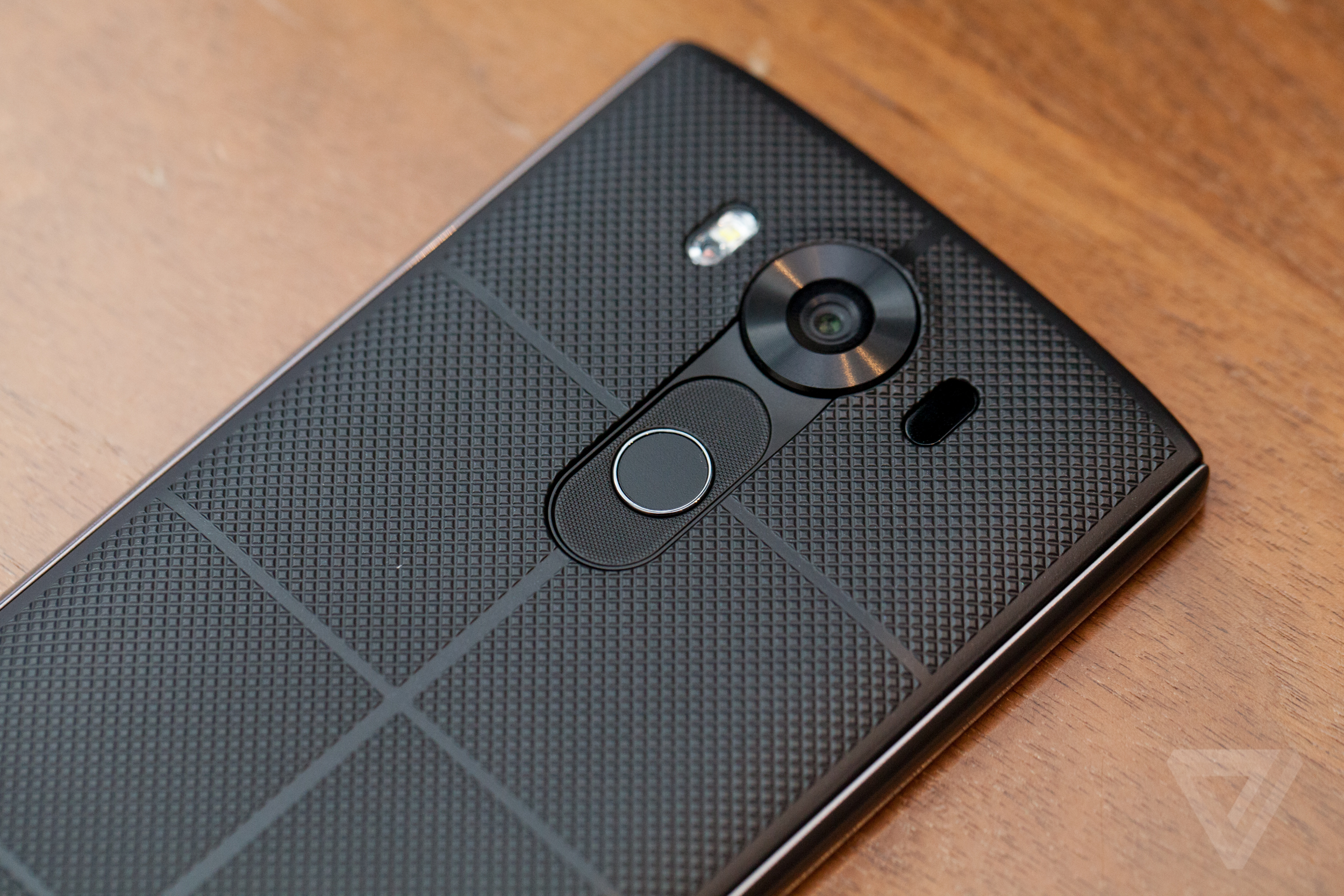 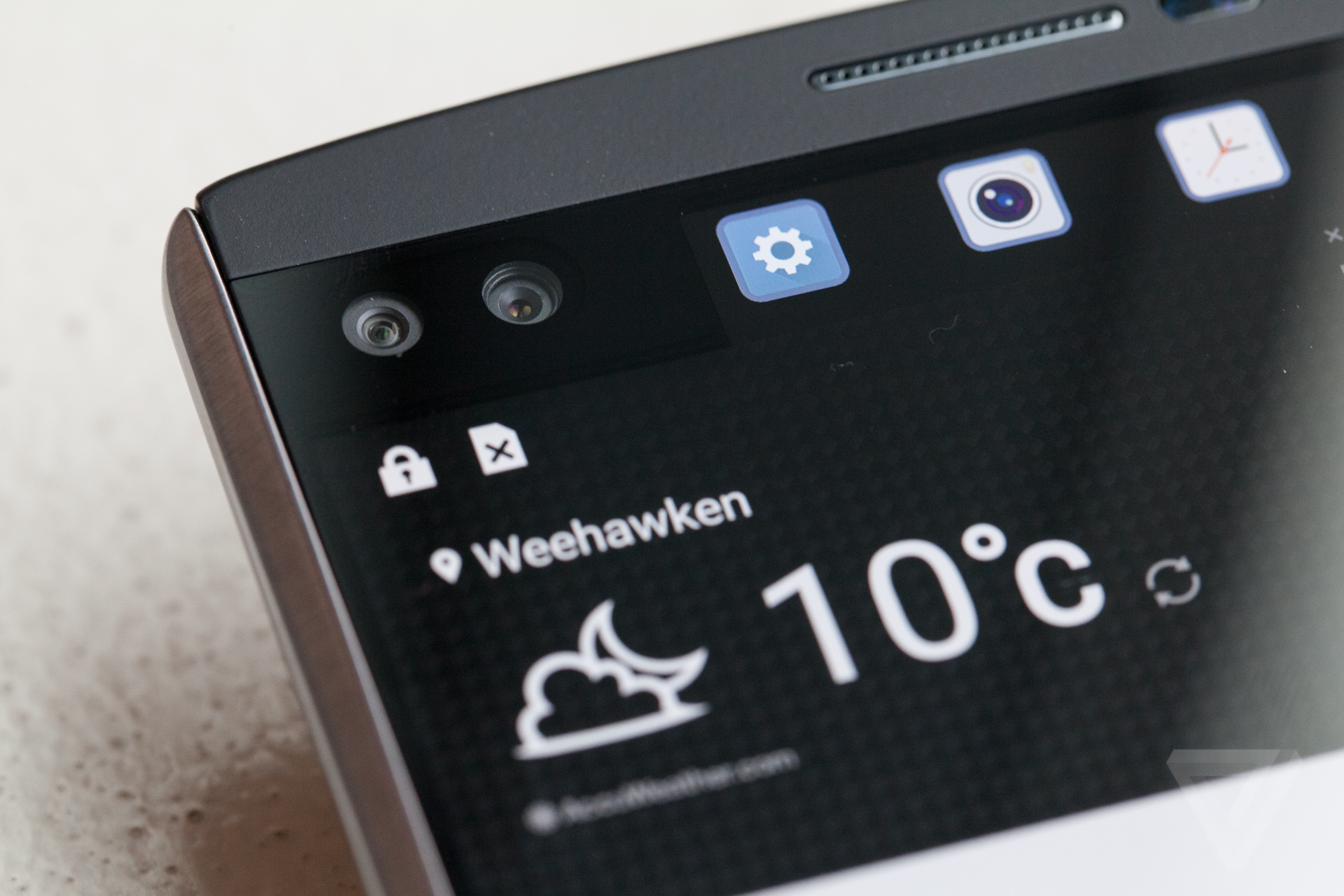 Where the G4 (and likewise, the G Flex 2) was for users who consume a lot of media, this is a phone for creators of that media, according to LG. That's why the company has retooled a few things. LG started with the video functionality, something the company's reps admitted was lacking on the G4 (and previous models). This time around users will have full manual control when shooting video, with access to everything like focus, ISO, white balance, audio levels, exposure, and more. The V10 can shoot regular, 1080p HD video, as well as FHD and UHD 4K video, and users will even have the choice of filming in a 16:9 or 21:9 aspect ratio. To top all that off, the V10 has electronic image stabilization built into the software to go along with the same optical image stabilization found in the G4.

All of this should make for a pretty great shooting experience. After all, the G4 was an extremely capable shooter, holding its own against the iPhone 6S Plus and the Samsung Galaxy S6 Edge+ in our recent test. But while the V10 wouldn't be mistaken for a mid-range phone, this by no means is this the most insanely specced phone available on the market. The V10 has one more gigabyte of RAM than the G4 (4GB instead of 3GB), and there's also a 32-bit digital analog converter (DAC) inside, but the phone still borrows a lot from LG's other phones. The V10 has the same Snapdragon 808 chip, QHD display resolution, 16-megapixel camera, and 3,000mAh battery as the flagship G4. There are also no buttons around the sides. Everything is on the back, from the volume buttons to the power button and fingerprint sensor, just like on the G4 and the G Flex 2. And the V10 has the same old micro USB port, so USB Type-C fans will have to wait.

Stainless steel and silicone should help keep the V10 from breaking

What does help distinguish the V10 from its LG predecessors is the materials. LG has left plastic mostly out of the equation this time around, opting for an aluminum body wrapped in stainless steel and "Dura Skin" silicone. And while some of LG's previous phones offered durability in the form of self-healing backs and flexible screens, the V10's durability supposedly comes from this metal-and-silicone construction. (The Gorilla glass on the front doesn't hurt, either.) The company wouldn't give a particular maximum height that you could drop the phone from, but they did show lab tests where it survived multiple drops onto brick from about 1 meter at a press briefing before the event.

The V10 may just be hours old, but LG sounds like it's already committing to the idea of the V series. Where the G line of phones have previously been updated in the spring of each year, you can expect the V series to see updates each fall. When asked why the line was launched with the "V10" and not the "V1," LG executives merely shrugged.

The V10 will be available on Verizon, AT&T, and T-Mobile, and because it's a premium phone, LG will likely price it as such. The company didn't give specific details on pricing, though, other than saying it will cost about the same as an iPhone 6S Plus. That's a fair comparison, too — the V10 is basically the same weight and fits in your hand the same as Apple's biggest offering. And we'll know soon if LG can cut into the growing market for big phones. The V10 debuts in South Korea on October 8th, and will be released in the US in early November.